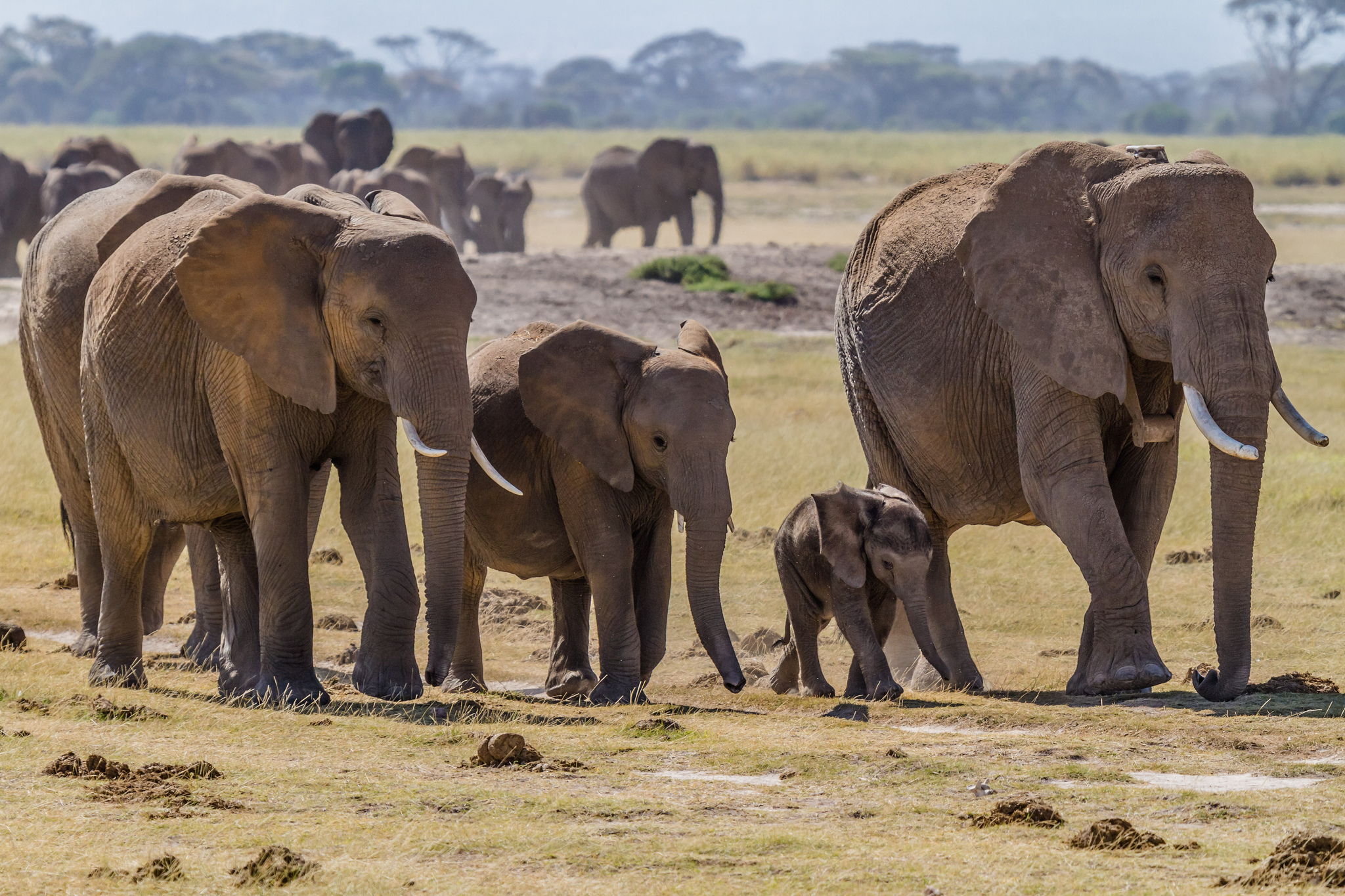 Despite our many efforts to raise awareness about the illegal ivory trade and poaching, we are still losing elephants at an astonishing rate. In just three years, 100,000 elephants in Africa were killed by poachers. And at current estimates, one elephant is poached for their tusks every 15 minutes. Some conservationists predict that if nothing is done to slow this rate of poaching that the African elephant will be extinct from the wild by 2025.

All hope is not lost, however. There are many people out there working to save these incredible animals. While statistically speaking, the majority of elephants are killed during poaching attempts, some make it out alive. Poachers usually employ methods where they will wound the elephant and wait for them to collapse before they kill them for their tusks. This gives rescue organizations a small, but very important, window to find and save these injured animals.

The David Sheldrick Wildlife Trust (DSWT) has become one of the leading elephant rescue organizations. For the past 15 years, DSWT has funded and operated anti-poaching mobile units. These include units on land and in air. A result of a partnership between DSWT and Kenya Wildlife Service, teams of vets receive word of poaching attempts and head to the scene, with the intention of stopping the attempt and saving the animal victims. In the past year, the mobile teams have treated more than 151 elephants that have survived poaching attempts and approximately 95 percent of the animals they treat survive.

In celebration of the incredible work these vets are doing, let’s take a look at some of the amazing rescue stories of elephants who were victims of poaching attempts.

Mshale is a 40-year-old male elephant. The lifespan of an elephant in the wild can reach up to 70 years, but the average expected life has dropped to 56, as a result of poaching. Targeted for his long tusks, Mshale was the victim of four poison dart attacks in Kenya’s Tsavo National Park – all within one year!

After his first rescue, Mshale (whose name appropriately means “Arrow” is Swahili) would continually return to DSWT’s Ithumba Orphans Rehabilitation facility in Northern Tsavo East National Park. The facility provided fresh water and mud baths, which Mshale loved. Members of DSWT got to know Mshale and made sure to keep an eye out for him with their field team and aerial surveillance.

Despite the fact that an estimated 1,500 elephants have died in Tsavo since 2011, Mshale has beaten all odds and is surviving and thriving thanks to his protectors. 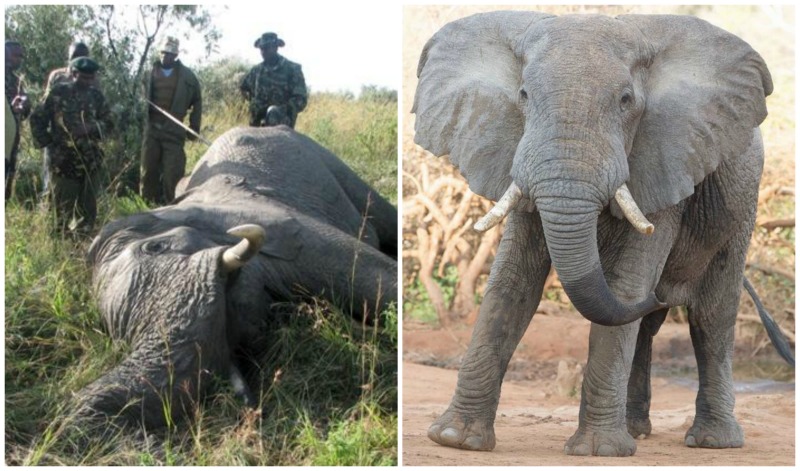 In April 2014, a young bull was found with a poison arrow in his side. The bull was shot by poachers and left to die. It can take several days for the poison to work its way through the elephant’s system, an excruciating experience for the elephant.

Thankfully, a group of rescuers from (DSWT) mobile vet unit located the elephant and were able to attend to the wound before it was too late. The vets performed emergency surgery right out in the field. While the four ton elephant was under anesthetic, they removed the arrow, drained the pus, continually poured water over the wound to get the poison out, cut out the already rotted flesh and closed the wound using clay. When the elephant woke up, he was able to walk away safely. 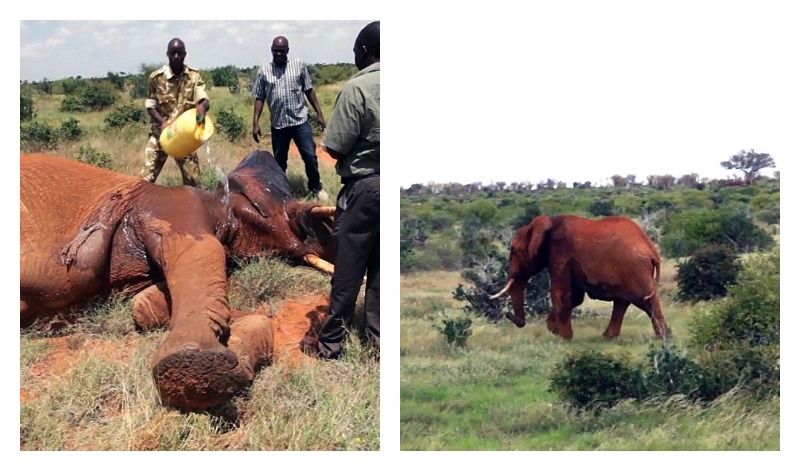 A DSWT helicopter was tasked with locating Tim after receiving word he had been injured.When they found him, they saw an infected wound on his left hip. It was discovered that the injury was a spear wound that was around a week old. Rotten flesh had to be cut away in order for the wound to be treated. For about 25 minutes vets cleaned the would and administered antibiotics to the elephant. Tim was back on his feet soon after. 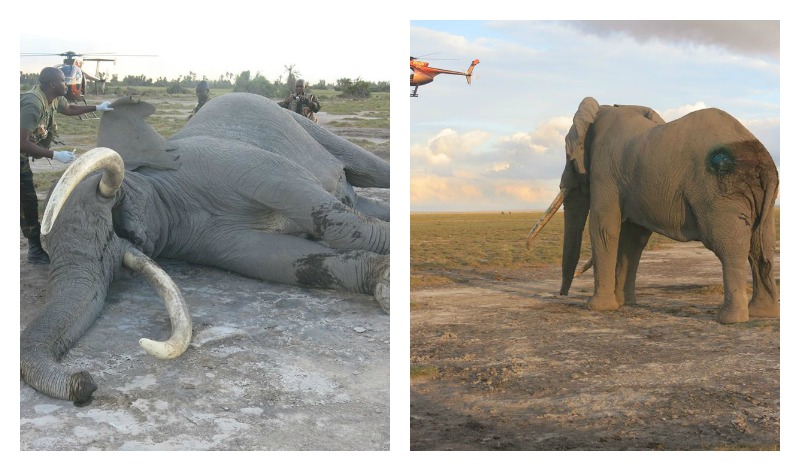 Unfortunately, not all elephants are as lucky as these three. Most elephants targeted by poachers fall victim to these terrible people. It is up to us to share the message that the ivory trade is fueling the extinction of the elephant population. Many organizations, like DSWT, are working to combat poaching on the ground, but it is up to consumers to remove themselves from this vicious circle as well. When the buying stops, so can the killing. For the sake of elephants, it needs to stop now.