Rescued From a Ravine, These Horses are now Thriving in Their New Sanctuary Home 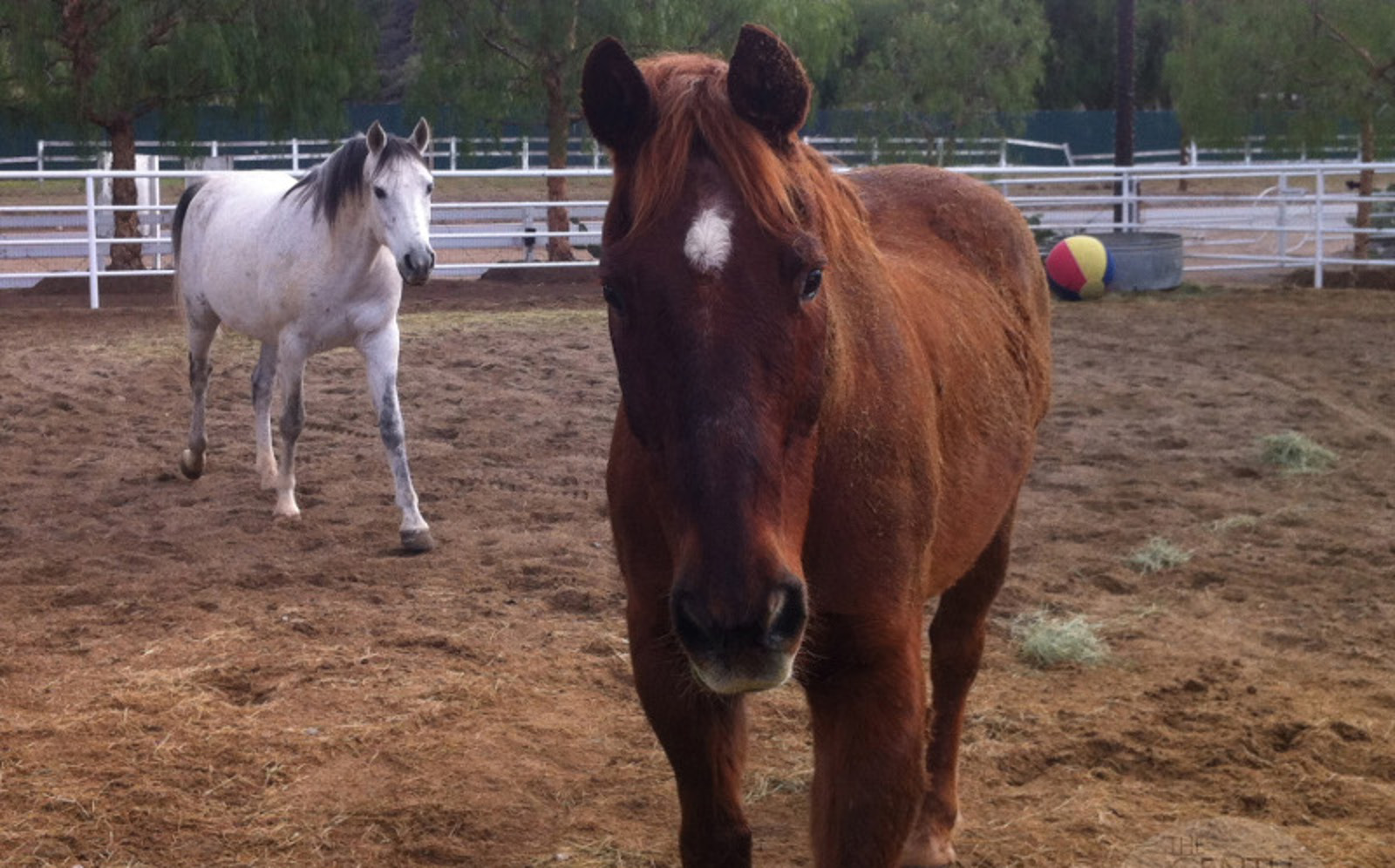 Horses are one of the many animal species that humans wrongly assume exist for the sole purpose of our use and service. Humans have a long tradition of domesticating and training horses for show, transportation, and entertainment. While aside from the carriage horse, most horses are no longer used as a primary form of transportation, however,  keeping horses for riding is just as popular as ever.

In their prime, horses are strong and powerful beings, seemingly incapable of feeling strain, but, this is not always the case. When horses get old, as all living things do, they become frail and weak, especially after years of carrying the heavy weight of humans. For the most part the general public never gets to see these old, worn horses, mostly because when they are no longer profitable their owners choose to get rid of them. Some horses find their way to sanctuary, but most horses are simply abandoned or sent to slaughter.

At one point in their lives Andrew and Patrick were fated to the later, here is their story.

After serving as a stud horse for 25 years, Andrew was abandoned by his owners. Ellie Laks, the founder of The Gentle Barn, believes that after Andrew was abandoned, he was adopted into the Mexican rodeo, a common occurrence for California horses. Once the rodeo was done abusing this old horse, he was left for dead in a ravine where he was finally discovered by local animal control. Andrew was covered in rope burns and scars that would indicate he had been tied with great force.

Laks explains to OGP “Andrew had a high level of fear,” towards humans, another indication of the mistreatment he had experienced in the rodeo.

Andrew was in terrible shape when authorities discovered him and he was immediately slated for euthanasia. Thankfully, in a last ditch effort to save this horse, the shelter that was holding Andrew contacted The Gentle Barn to see if they would take the old horse.

When Laks first laid eyes on Andrew, she explains to OGP that he was “so hopeless,” and literally a “walking skeleton,” from ages of malnourishment and abuse. What shocked Laks most about Andrew was “how depressed” he was, having lost all the life and spark for survival from his eyes.

Laks tells OGP, she approached Andrew and began to gently pet his head and explain to him that they had come to save him, that The Gentle Barn, “was a safe place for animals that had nowhere else to go,” and there, “he didn’t have to carry us, or make money for us.” 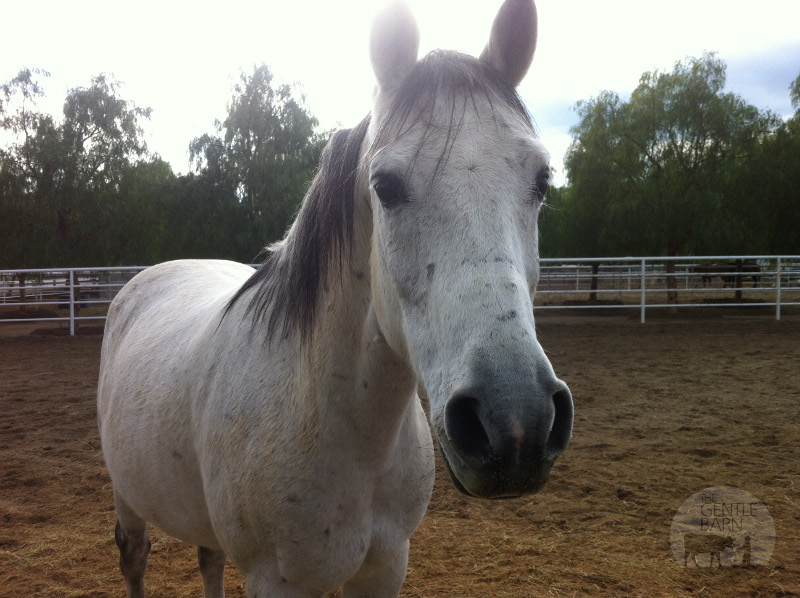 As Laks continued to explain to Andrew that at The Gentle Barn he would be loved and groomed, and fed lots of treats, his head began to slowly rise from the ground until he eventually perked up and shook his head as if to say, “let’s go!”

Before Andrew would leave the shelter he turned and pointed his head towards another horse. Laks tells OGP that Andrew pulled his head and gestured so strongly towards this other horse that she approached the shelter staff to ask what his story was. Like Andrew, the other horse, Patrick, had been left in a ravine–though their stories are not related.

Laks tells OGP, Patrick looked as if he had been “beaten to hell,” used for years as riding horse, his spine was severely bent from carrying the weight of humans.  The shelter volunteer told Laks that Patrick was slated to be euthanized the next day, so naturally seeing Andrew’s strong bond with Patrick, Laks couldn’t possibly say no and agreed to take both horses back to The Gentle Barn.

A New Life for New Friends

Andrew saved Patrick’s life and to this day, the pair are inseparable. The veterinarian who examined Patrick told Laks not to expect him to live long due to the extent of his injuries, however, he was taken in and loved nonetheless. Clearly this vet did not recognize how powerful friendship can be as Patrick is thriving nearly two years later.

Both horses have severe back injuries, Laks explains that this happens as the result of years of being forced to carry the weight of humans, horses’ backs are simply not designed to accommodate such tasks and the muscles breakdown over time, causing a whole host of arthritic issues. To help treat this condition, Andrew and Patrick are both receiving chiropractic therapy and are already doing leaps and bounds better than when they arrived at The Gentle Barn.

The biggest challenge on their road to recovery has been overcoming their fear of humans. Laks tells OGP that Andrew, “spent more time jumping and spinning in the air with fear than he did on the ground,” and that “Patrick didn’t even know what a cookie was.” 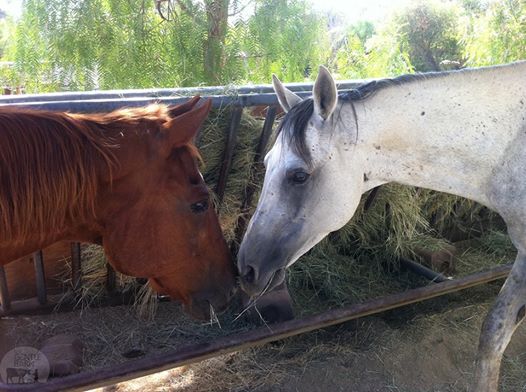 Luckily, as the horses adjusted to their new lives and learned that they would no longer be asked to serve humans, but it was their time to be served, their fear subsided and they grew to be the free and happy horses they are today. Laks tells OGP, “Andrew’s absolute favorite thing is to run around at full force,” and the formerly malnourished and frightened Patrick, “loves to be fed and cookies and carrots and to be babied.”

While new horses are typically integrated into the larger herd with time, Andrew and Patrick have little interest in other horses. Laks explains that when they are around other horses if one even looks at Patrick, Andrew will run charging at them as if to protect his friend. 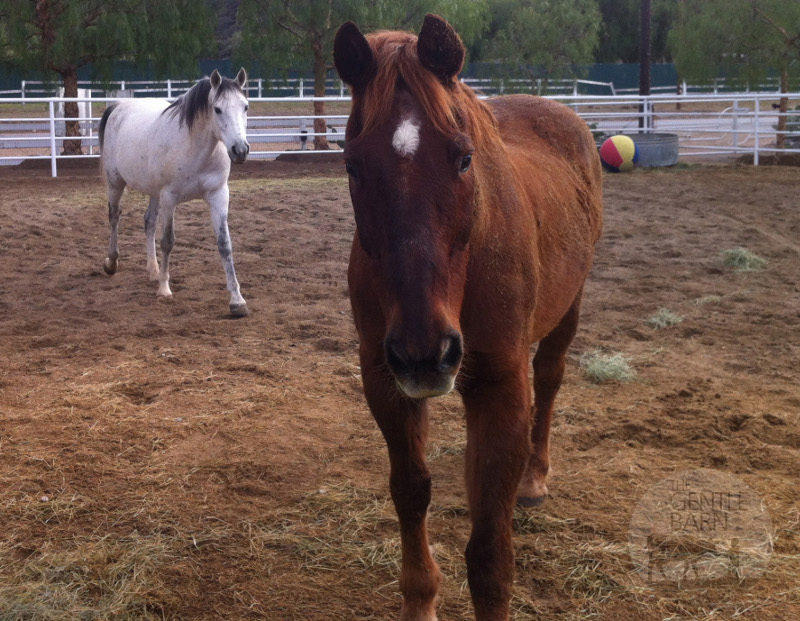 While Andrew and Patrick’s story has a happy ending, Laks explains that they are not an exception, but the rule, in terms of the conditions they had to endure in their previous lives before coming to sanctuary.

What We Can Learn From Andrew and Patrick

Laks tells OGP, “that while riding horses has become an acceptable part of society, a horse’s body is not made to be sat on.” While she does concede that some horses may bond with their riders and learn to like riding, but the sad reality is that once horses grow too old to be ridden most are abandoned.

In California this has become a bit of an “epidemic” and hundreds of horses are thrown into ravines every year. Laks explains that on the West coast, the majority of horse owners board their animals in stables, renting them out to ride or occasionally taking them out for rides themselves. However, many do not realize that purchasing a horse is a good 30-year investment and that when horses are in their “golden years” they need to be taken care of by the people who loved them in their youth, not heartlessly abandoned or sent to slaughter.

This is also true of organizations who use horses for riding lessons or recreation. Laks urges readers to not forget to consider the sort of organizations they are supporting when taking lessons or going for rides and to ask, will these establishments care for the horses when they are old and worn out? Or will they be doomed to fates similar to Andrew and Patrick before their rescue?

These animals are not simply designed for our use but deserve to live on their own right. Thankfully because of organizations like The Gentle Barn and kind individuals like Ellie Laks and the sanctuary staff, many animals can find a peaceful happy life in their retirement.