A Horse of a Different Color: Carriage Horses Are Neither War Horses Nor Work Horses 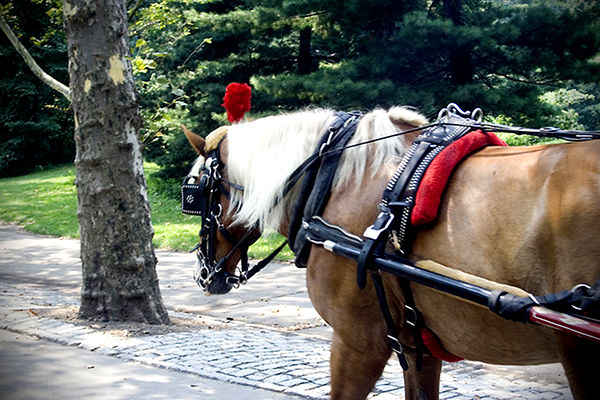 Horses have always been the innocent victims – whether taken to war without a choice and worked to death; or used in rodeos, horse racing or New York City’s  inhumane horse-drawn carriage industry.

Sad history – In the age before the automobile, horses were notoriously overworked, and many died in the streets.  In NYC, they pulled wagons loaded with people and goods, and they served as the power for the City’s street trolley system.   Between 100,000 and 200,000 horses lived in the city at the turn of the century.  Many were literally worked to death — their carcasses left on the street waiting for the street cleaners.  From an article by Joel A. Tarr in American Heritage Magazine – Urban Pollution – many long years ago  “The average streetcar nag had a life expectancy of barely two years, and it was a common sight to see drivers and teamsters savagely lashing their overburdened animals.  The mistreatment of city horses was a key factor in moving Henry Bergh to found the American Society for the Prevention of Cruelty to Animals in 1866.”

Steven Spielberg’s film War Horse gave me new insight into what the term “work horse” and “war horse”   really meant.  During World War I, horses were transported via rail to New York City to be shipped to Europe for use in the war.  They pulled cannons, trucks and ambulances and were literally worked till they dropped in the ravages of war and hand-to-hand combat. Hundreds of thousands of horses did not make it out alive, dying from artillery fire, starvation and disease. With the end of the war, and with increased mechanization in the 20th century, the need for draft horses declined.  Many of these horses were sold to slaughter.

Humans had contributed to the overpopulation of draft horses by over breeding, cross breeding and selective breeding.  Mules are man made – the hybrid offspring of a female horse and a male donkey.   So are hinnies – a combination of a male horse and female donkey.  A 2008 article from Horseman Magazine says “Most draft horses however were really the result of selective breeding. Programs for breeding were primarily set up to produce these large, muscular and powerful horses.”

Watching “War Horse” provided a window into the ways our society has treated horses through the years.  Horses were domesticated by humans who needed their strength to perform a variety of duties that they were unable to do.  And horses, being the docile animals that they are, complied.    They became known as “beasts of burden” as if this and nothing else described what they were.

Our use of horses over the millenia is nothing to be proud of – the devastation of war; the exploitation of animals – but people felt they had no choice.  Real work needed to be done, and powerful horses were available and capable.   Today, we don’t need to use horses to work for us.  We have a choice, and can and must choose not to exploit them.

Where do they go? – Among the most abused work horses today are those who pull carriages with tourists in major urban areas like New York, Chicago, Boston, Philadelphia,  Charleston, Atlanta and Rome.  In New York, these horses are forced to haul tourists through the congested streets of midtown.     When no longer able to do this pulling, they are removed from the business.    Unconfirmed rumors abound concerning their engraved hoof identification numbers being sanded off so they can’t be identified as a NYC carriage horse when they are in the auction kill pen.  Freedom of Information requests from the  Department of Health reveal a very high turnover of carriage horses – between 60 and 70  a year – about 1/3 of the total horses.   Auctions are the likely place to sell them and recoup costs.  When a horse is sold outside the City, as most are, records are not required to be sent to the Department of Health – only eventual notification that the horse is no longer in the system so the driver does not have to pay the license fee. Although the industry has taken advantage of the NYC landscape to ply their trade, the drivers are not accountable for where the horses go, and the City has never seen fit to change that, despite pleas from advocates who believe they deserve a humane retirement.  There is no transparency in this trade although they benefit from it being a cash only business with few meaningful restrictions.

It has long been suspected that many of these horses are “laundered” with the help of some Amish farmers who essentially act as middlemen.  They will take the horse directly to auction so the blame for the horse ending up in the kill pen is not traced back to the carriage operator.  A perfect example of how this played out was with Bobby II Freedom, a former NYC carriage horse jointly rescued by the Coalition to Ban Horse-Drawn Carriages and Equine Advocates in 2010.  Every year more than 100,000 equines are transported from the US across the Mexican and Canadian borders where they are slaughtered for human consumption and shipped to in Europe and Japan.

The horse of a different color – The present day urban carriage horses are not work horses although the drivers like to pretend they are.  That term needs to be reserved for horses who helped their owners survive before the industrial revolution.  Instead, they  are entertainment horses – they are horses of a different color.  They are often decorated with feathered head dresses, some with glittered body paint and painted hoofs.  Undignified –  a tawdry decoration to attract tourists.

A work horse would pull a plough to till the earth so the farmer could plant seeds and feed his family.  A carriage horse pulls unsuspecting tourists around a city to see the sights,  and according to a recent article in the NY Post, they often get ripped off. These tourists don’t know about cruelty and safety issues, and the carriage drivers certainly aren’t informing them.

A typical day – By law, a NYC carriage horse may work a punishing nine hours a day, seven days a week.  Throughout their long shifts, they are confined between the shafts of their carriage wearing heavy equipment, blinders and a metal bit in their mouths.   During the holiday season, the horses are worked to exhaustion.  The current law requires a 15 minute break every two hours, but it is not enforced.   At other times customers are scarce, the horse stands on the hack line, often ignored by her driver whose attention is elsewhere. She is frequently bored, either mentally shutting down and appearing  dispirited,  or repeatedly pawing / pounding her hoof on the pavement.  It is a form of displacement behavior on which the horse eventually becomes stereotyped.  Restricted by the carriage, she has no freedom of movement.  She is not even able to scratch an itch.

Laws not enforced – Although it is against the law in NYC for horses to be left untethered or unattended, it is a common practice.     In 2007, a horse named Smoothie was attached to her empty carriage waiting unattended at Central Park South when she was spooked by a loud noise.  Frantic, she bolted, got her legs tangled in the carriage and ended up crashing into a tree and dying.  Another horse who saw Smoothie bolt also spooked and ran into traffic, crashing into a car.

On October 28, 2011,  an unattended horse spooked on Central Park South near Columbus Circle, bolting into traffic and ending up in the park where he crashed into the wall.  He is reported to no longer be in the business.

Carriage drivers like to characterize themselves as the experts, the “real horsemen”; this is a thinly veiled and polarizing tactic designed to suggest that anyone who wants to see this business come to an end in the large cities lacks knowledge. They take this line of reasoning even further, stating that proponents of a ban “know nothing about horses” and that the carriage horses–all horses, in fact–need a job. This, of course, is a human concept.

Having knowledge of horses does not equate with treating them well or knowing what is best for them.  Michael Vick knew about dogs, and look how he treated them.  When people make money off the back of a horse or any other animal, their first priority is invariably profit. One does not have to know a fetlock from the withers to know that enslaving these horses and shackling them to a carriage for hours on end is inhumane and is all about what the driver wants – not the horse.

Jobs or respect?  As for needing a job – this is just an excuse to keep the horses working in the carriage business.  Our focus is on urban, commercial / tourist carriage businesses in cities like New York – nothing else.   Horses have highly developed social relationships  and need mental and physical stimulation.  They are exceedingly social animals and should have the opportunity to graze in a pasture in the company of other equines  – something that is denied to them as a carriage horse.

New York City needs to move into the 21st century and stop pretending that this is a big tourist draw or that it provides lots of revenue to the city.  It is not and it does not.  Horse-drawn carriages pose a danger for the horses, their passengers, other vehicles and pedestrians.

It’s way past time to end this cruel and inhumane anachronism.  We hope that time will come in the next few years with the passage of the Avella/Rosenthal  bill  to ban horse-drawn Carriages, which is currently in the New York State legislature.