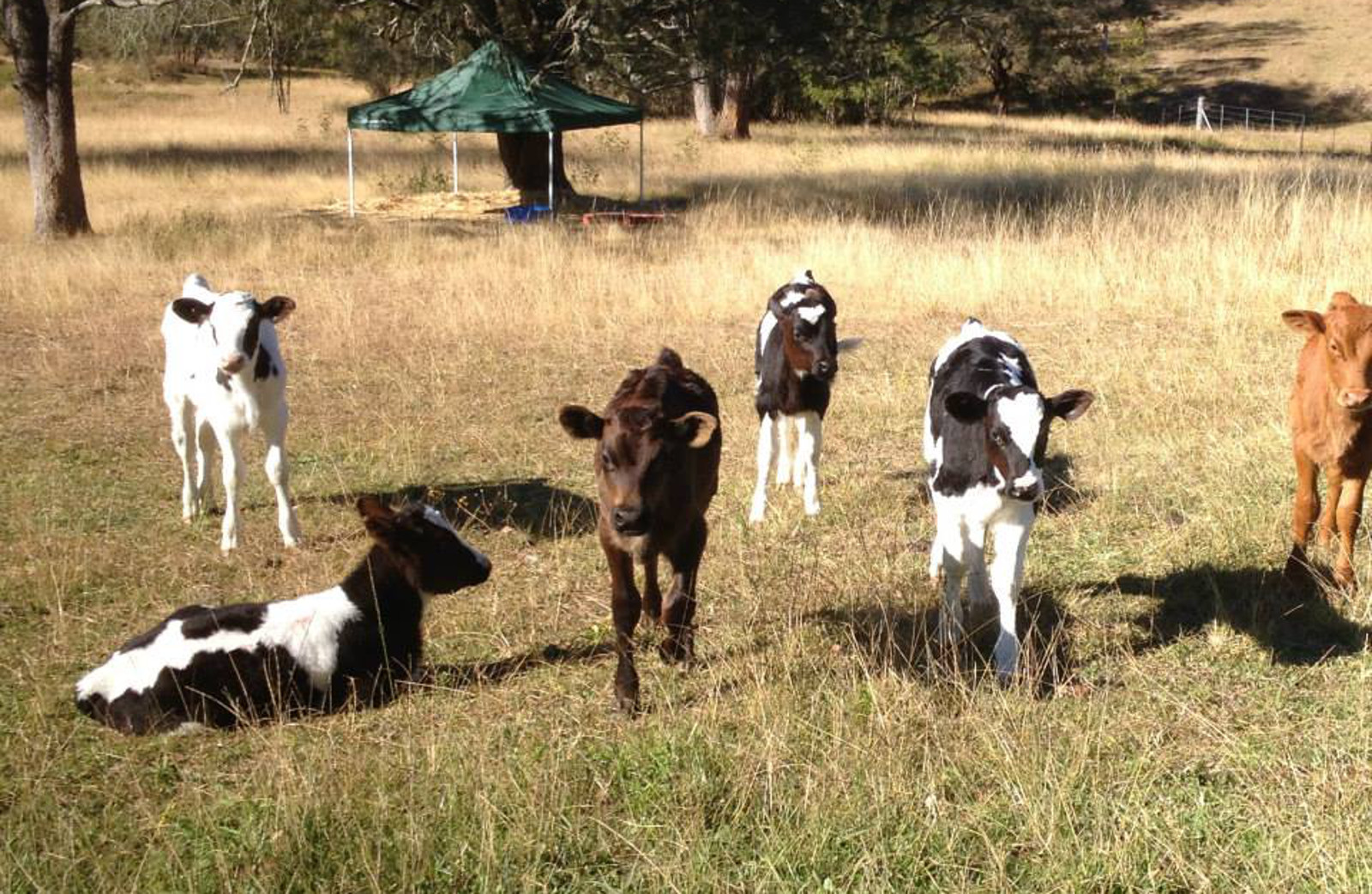 Milk life for cows is really no sort of life at all. This rings especially true for male calves born in the dairy industry. Although most people who have consumed milk their entire lives assume the dairy industry is a “lesser” evil than the beef industry, what largely goes untold is the story of the male calves born to dairy cows. You see, in order to produce milk, cows have to be impregnated, if the calf is a girl then she will be raised as a dairy cow; but, if a boy is born then what is the farmer to do? Male cows of course don’t produce milk so they are really of no benefit to an industrious farmer. So sadly, the majority of male calves in the dairy industry are sold for veal.

That is if they are not rescued in time. The six current male calf residents of Manning River Farm Animal Sanctuary (MRFAS) are all offspring of dairy cows so they were not born into a world that was very welcoming of little boy cows. However, lucky for these wee calves, four very compassionate women, Sharon, Fiona, Denise and Tara (who also happen to be vegans), started a farm animal sanctuary a month before the first rescued calf was born. Upon seeing an ad for male calves in the newspaper, Tara Maher, one of the co-founders of MRFAS, contacted the farmer explaining that they would like to rescue the calves. 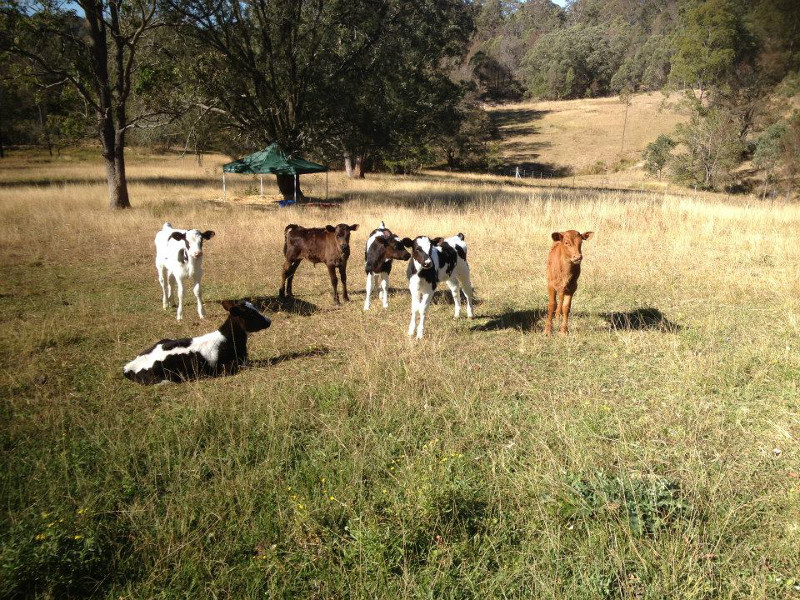 And so four little male calves: Bo, Harry, Maverick and Ingram, were all brought to MRFAS, a haven where they would be able to live out their lives in peace. Bo was the oldest at four days old and the other three were no more than a day old. 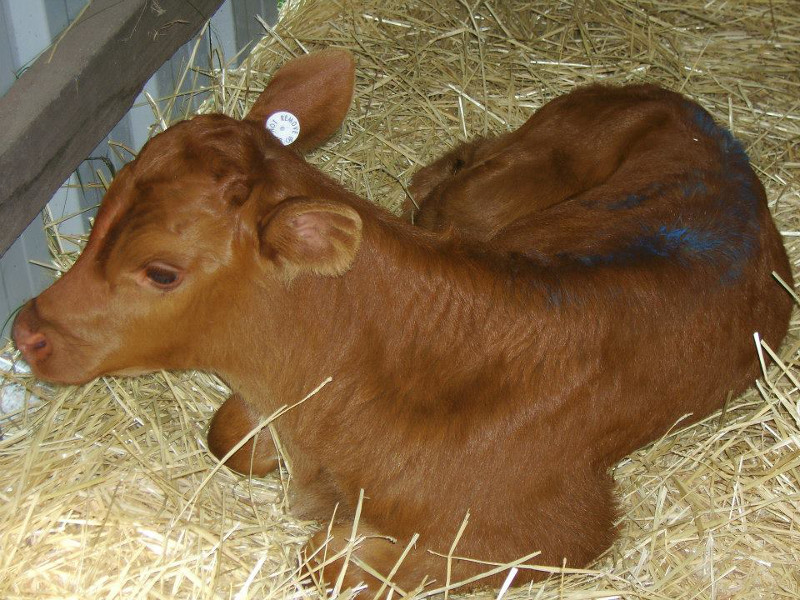 Maher explains the experience of her colleagues who went to rescue the calves to OGP: “On arrival they were confronted with an awful site of rows of small pens and  a little calf alone in each one of them. The farmer went down the row and pointed out which ones they could have/not have.” 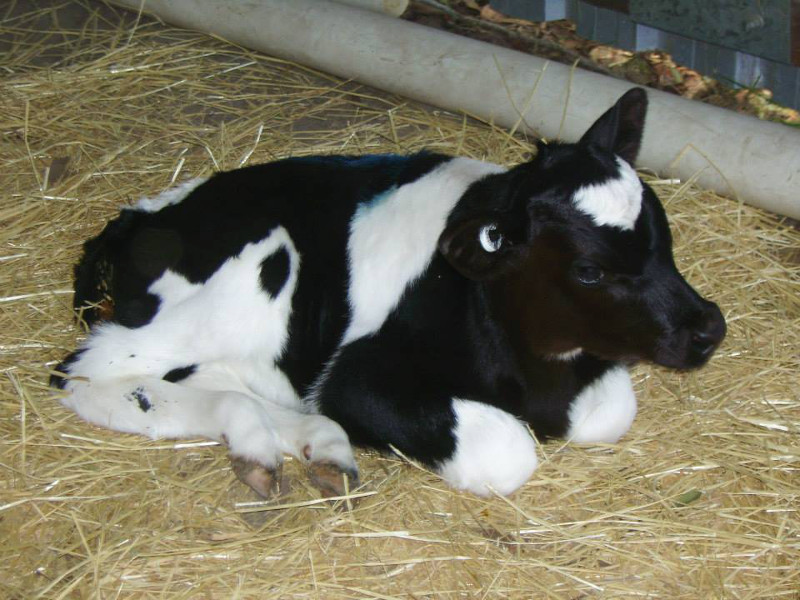 It is clear that these calves were little more than commodities to the dairy farmer.

Upon arrival the four were very quiet and timid, but having each other for company surely eased some of their stress. 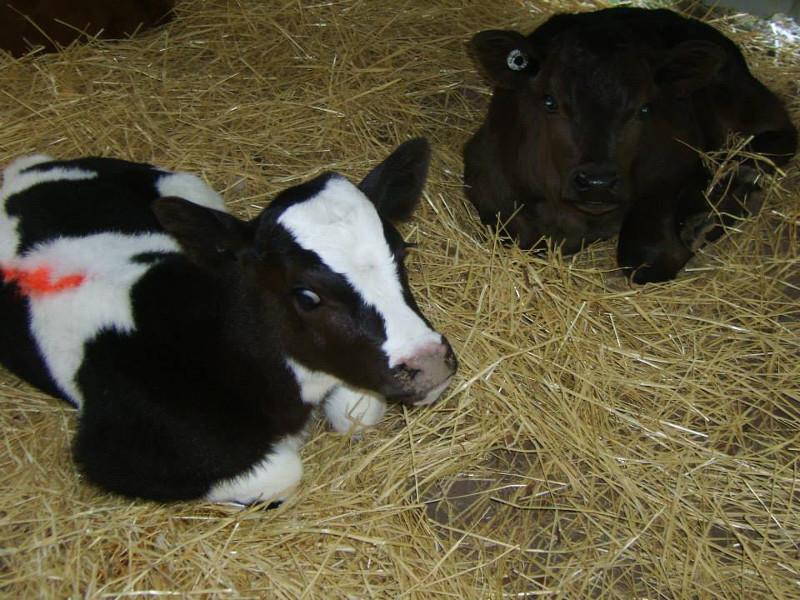 Maher tells OGP, “They were in okay condition, a bit thin maybe and quiet unsteady on their feet. We started them on a calf formula and commenced bottle feeding every 3 hours. They soon got used to us  and  fed really well. At this stage we kept them in a small enclosure all together.” 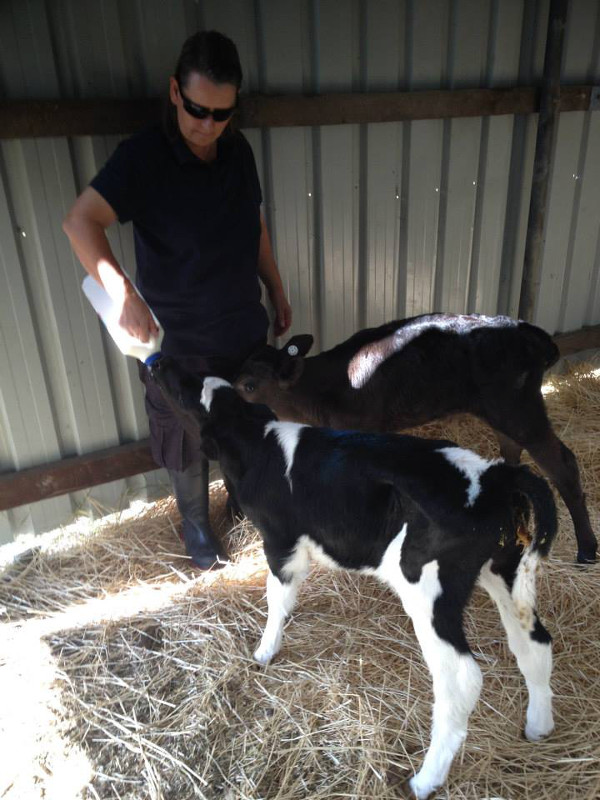 Cows are very emotional creatures and like humans they have friends and are comforted by familiar company. No more than a week after they had rescued Bo, Harry, Maverick, and Ingram, Maher received another call from a dairy farmer who was looking to get rid of a male calf.

Just like that the four became five and MRFAS was growing into a veritable hang out for male baby calves. Tuck, the fifth calf to arrive was only two days old and came to the sanctuary thin and very dehydrated from scours. He had to be taught to feed from a bottle, but with a little time and some proper nourishment he was ready to join his new pack of friends.

Maher tells OGP, “The other boys welcomed Tuck lovingly,” with this new addition all the calves were moved to a bigger paddock. Speaking like a proud and loving mother, Maher recounts, “Our boys loved the bigger paddock and it was a joy to see them running around and kicking their legs.”

A space to run and kick up their legs is such a wonderful thing for these rescued calves to have, especially considering their pervious state in isolated crates on the dairy farm.

The last addition to the pack of boys was Noah. Noah’s story speaks to the deep emotions of cows, a quality that many people do not recognize. Noah was his mother’s first born calf and the separation of the two was particularly traumatizing. 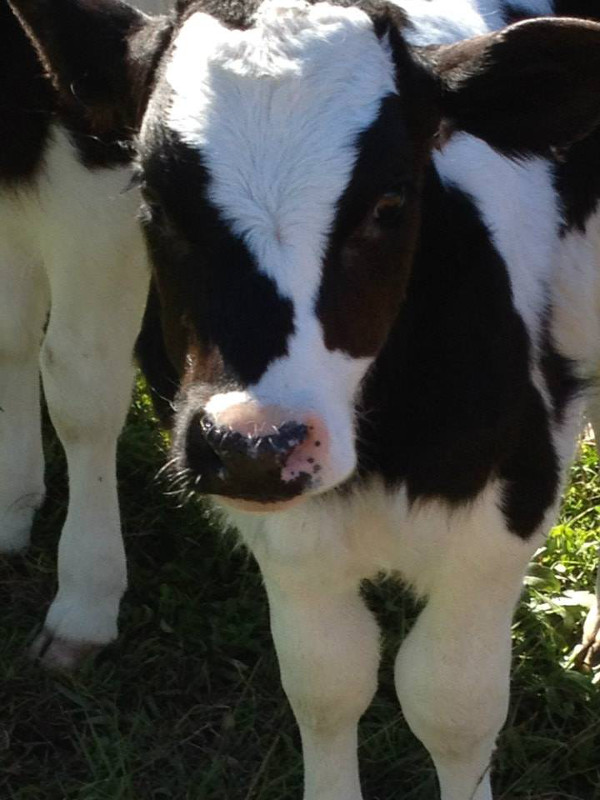 Maher tells OGP, “From the time we picked him up he cried out for her. His cry was so sad and distressing to hear. We decided to put Noah in with the other boys straight away. Noah was not interested in them, he just wanted his Mum and would sit by the side of the fence calling for her.”

The little calf showed no interest in feeding or playing with the other calves, he was focused on finding his mother. As heartbreaking as it is to think Noah had to be separated from his mother, thinking about the alternative if he had stayed on the dairy farm is worse. While the first few days at MRFAS were difficult for the grieving calf, the other calves pitched in to help him adjust.

Speaking to the incredible compassion of the other calves, Maher tells OGP, “We also noticed that the other boys would sit with Noah, so although he showed no interest in them they ensured he was never alone.”

And six weeks later, little Noah has never been alone, but has gained a new family of five other little calves. 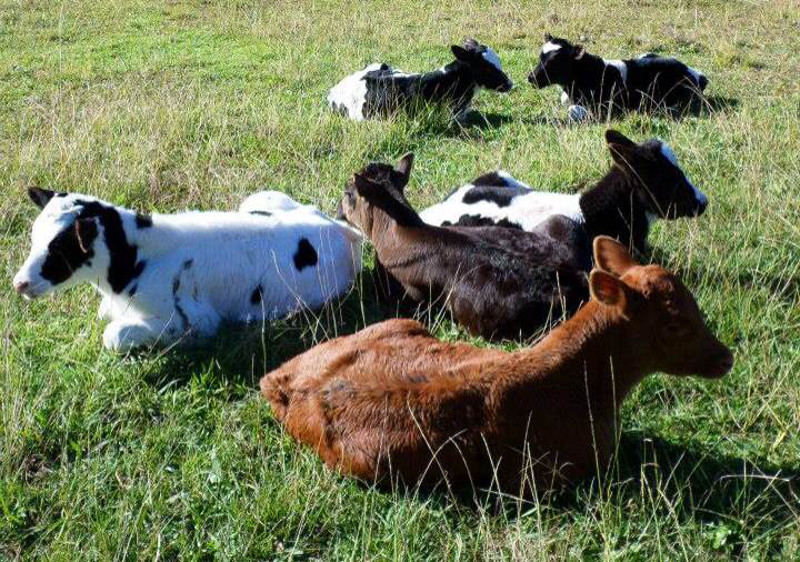 Maher tells OGP, “they all have shiny coats and big bellies,” but their personalities could not be more distinct. Maverick and Tuck are the leaders of the pack and Tuck and Bo are “head butters,” Maher explains, “this is a natural thing for them to do and they mean no malice they simply do it after feeding to get more milk. Tuck is funny as he head butts the air as soon as he knows the bottle is coming.”

A calf who knows what he wants. Conversely, “We call Harry our sucker, he sucks everything & after feeding him you will not get away with dry clothes.”

Just check out this picture of Harry trying to suckle the hand right off Kim–from the amazing band Matt & Kim. 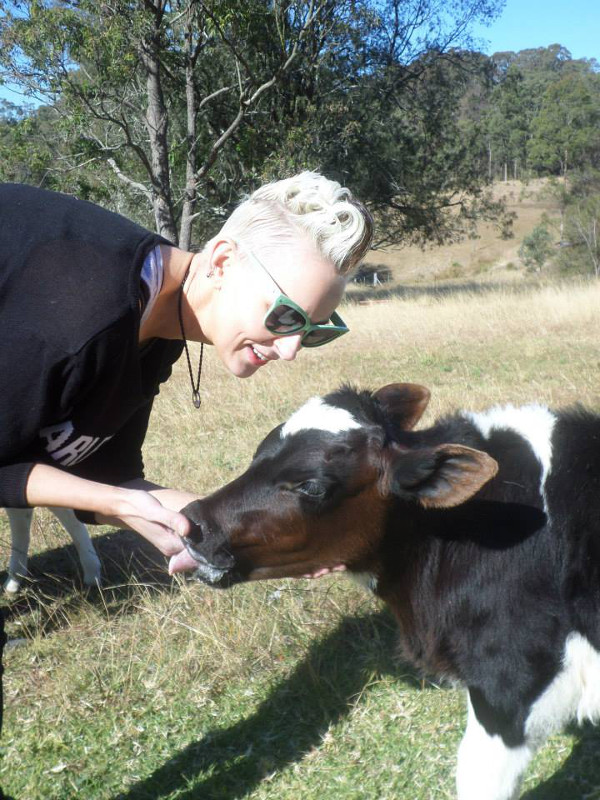 Quite the bold little calf, eh? The other two, Ingram and Noah are of the shy variety, Maher explains, “Ingram and Noah are a bit quieter and slightly calmer, although Noah certainly has his head butting moments. Ingram is a bit of a slow coach as is always last to finish his bottle in contrast to Noah who is often first.”

All in all, these little calves don’t seem to feel slighted by being born males in the dairy industry because it has brought them all together to live happily at MRFAS.

Maher tells OGP, “They all play together and don’t seem to have formed best friend pairs, they all just seem to love each other. They all have their crazy times and will just take off running and kicking their legs although it appears Tuck does this more often than the others. They are all going from strength to strength and we are all quite proud Mums.”

It seems these six babies could not have found themselves in a better place filled with love from each other and their kind human caretakers. While raising these six calves has been nothing but a joy to Maher she recognizes the bittersweet quality of her role in their lives, “Despite our joy of having these boys in our life, the best place for them is with their Mums, however as they’ve been born to Mums in the dairy industry that cannot be.”

Maher continues, “Our gorgeous boys, Bo, Maverick, Harry, Ingram, Tuck and Noah are not a waste product, they have an identity, they have life and we have the joy of them in our lives.”

To learn more about Manning River Farm Animal Sanctuary, check out their website and Facebook page. To donate to help keep these six ragamuffins in treats and hay, click here.