Problematic Pineapples: The Human and Environmental Cost of Your Fruit 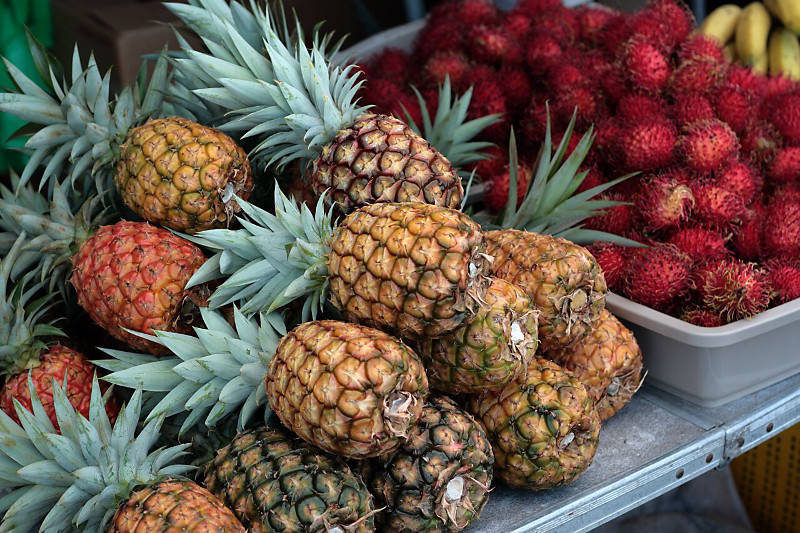 Pineapple…a much-loved, fun-shaped, tropical fruit that is often associated with Hawaii. Hawaii is also where the company Dole first started canning and delivering pineapples to the American population. In reality, only 400 million of the 300 billion pineapple fruits farmed annually are Hawaiian crops, which is about .13 percent. The US does not even figure in the top five producers of pineapples in the world, with Costa Rica and the Philippines at the top, and it is on Costa Rica’s “rich coast” where things become problematic.

Pineapples make up 20 percent of tropical fruit production in the world. Its’ production has grown by 400 percent over the last 50 years. Costa Rican pineapple production has doubled over the past 10 years, making it the largest supplier of the European Union. It is the United States, however, that imports the most pineapple of any country on earth with 90 percent of it coming from Costa Rica.

Costa Rica is known for beautiful forests, beaches, and monkeys. It’s a popular Central American travel destination. The reality for those people who call Costa Rica home is not so rosy, however. To watch a very informational video on what is happening in Costa Rica, click here. In short, the pineapple industry is one of human rights violations and environmental issues, all for crops of luxury fruits.

The secret to the overwhelming success of the pineapple industry in Costa Rica is an enormous amount of migrant workers from Nicaragua. These people arrive and start working in Costa Rica without any papers, meaning the companies they work for can have them deported at the smallest sign of trouble. This option-less, flexible workforce means that laborers work six days a week for long hours, and are still not paid a liveable wage. Unions are working to improve conditions for workers, but many migrants claim that they are discriminated against, or even sacked, by the unions because they are not employed legally. Issues are especially apparent around female workers, who are less frequently employed than men to begin with because maternity pay costs companies more. In addition to discrimination, many women complain of sexual harassment and discrimination at the worksite.

These workers’ health is also impacted by the problematic environment in which they work, where pollution abounds…

Pineapple production relies on a huge amount of chemical pesticide use and monocultures (intense production of only one crop.) Click here to read an academic journal on the importance of soil health and plant health, and the connections to mono-cropping. The intense use of agrochemicals has huge effects in Costa Rica, where the effects of pesticide use are exacerbated by the fact that Costa Rica is a rainforest. This means that intense rainfall carries the pesticides away from the agriculture site into water supplies. Water sources for local communities are then polluted. Pesticides are contaminating aquifers, groundwater, and are causing erosion, sedimentation, and deforestation.

The communities affected by this water contamination are now reliant on the government to deliver water to them. Six thousand people in communities along the Atlantic Coast are dependant on these deliveries and are reporting other health issues within their populations, such as birth defects, skin disease, and respiratory issues.

New developments surrounding GMO crops are taking place in Costa Rica. This new variety, called rosé, gained USDA approval this year. It is not, however, available for purchase yet, as it is still undergoing tests. The company, Del Monte, will continue testing in Costa Rica, with potential sales in the U.S. one day. At the moment, the GMO pineapple being tested cannot reproduce on its own, as it is grown in a monoculture. This means it is not exposed to the appropriate pollinators to grow on its own. The crop is meant to be more uniform, though, since the genetic modifications have been done to ensure more uniform growth and quality.

The potential for genetically modified pineapple to be available to American consumers will certainly generate more controversy if it comes to pass. It’s not all bad news down in Costa Rica, however. Consumers International wrote a report last year about what is being improved in the pineapple industry in Costa Rica. Unions are not yet saying that the situation is getting any better, but negotiations are being put in place to move forward and global awareness is growing.

So, the next time you’re buying your imported fruit, check where it’s from. Take a second to think. Ideally, the pineapple you enjoy should be as local as possible. Consider taking a look around to see if there is some fruit available from the Aloha State.