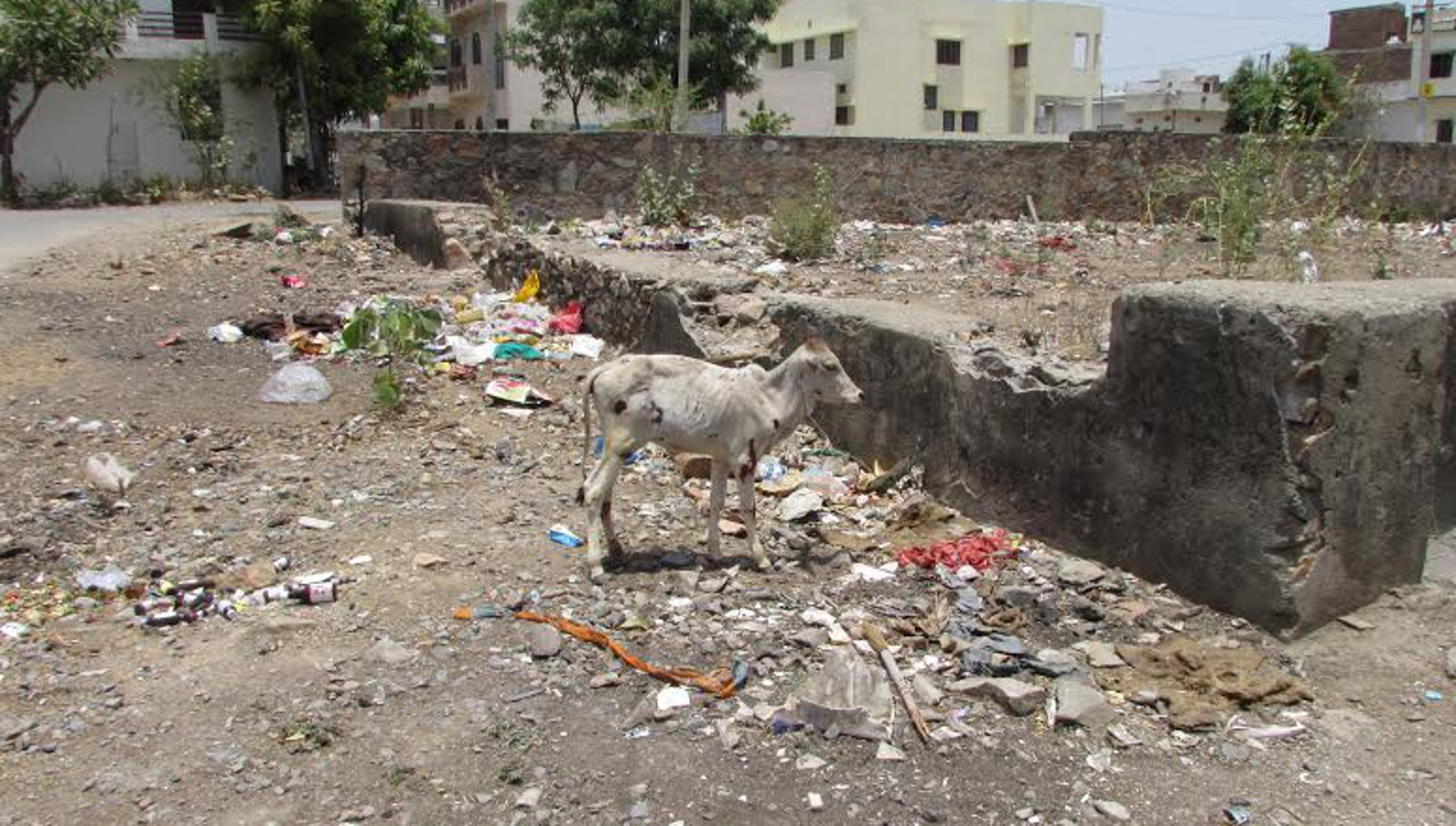 India is rapidly urbanizing. Cities were once villages where roads were made for bicycles and the occasional motorcycle. The fields were plowed by bulls hauling carts and they often freely grazed after working hours. Today, urban roads are jammed with cars and trucks. The fields are mainly plowed by tractors and the cart bearing bullocks have all but disappeared. However, the cows have not.

Many people celebrate India as home to the greatest number of vegetarians in the world.  But with half a billion cattle, India is also the number one beef exporter in the world — ahead of Brazil, Australia, and, well, everybody. It also has the most dairy farms in the world. Half a billion cattle live in India, and in Udaipur, a mid-sized town of 500,000, thousands of milking cows adorn households and wander our streets. The majority of wandering cows in India are older females who are no longer producing milk. Of little use to their farmers, they are shooed away with a broom from the homes where they spent the first five years of their lives, often tied on short chains, allowed to walk only 10 minutes a day to a water trough.

Life on the Streets for India’s Cows

A lucky cow on the street will have a little circuit she navigates, almost the same pattern repeating day after day – if she’s not interrupted by a player in the meat trade. She’ll stroll down to a friendly neighbor’s house where she knows she’ll find two chapattis (flat bread) which were left just for her precisely five minutes before her arrival. She’ll amble to the front gate of another home where a carefully installed a cement water trough and she’ll take a few long draughts of fresh water. Next stop is the vegetable man on the corner who cuts off the stalks of cauliflowers and throws them into a heap, just for her. She’ll stand and bask in the sun for a half hour after this tasty morsel.

But then, like so much in India, the silver lining has a cloud. Often cows are caught in traffic jams or hit my motorists on the chaotic streets of busy cities. For Animal Aid Unlimited, these speeding drivers are disastrous for cows, and they keep our rescue team of 55 busy every day. Many of the cows Animal Aid Unlimited rescues suffer from bones broken or gashes opened by passing vehicles. On most days, Animal Aid treats about 50 cows and bulls plastering fractures from toe to hip, snugly wrapping puncture wounds and gashes in fresh bandages, and pushing back prolapsed uteruses to safety inside.

The rescue keeps busy, treating on average about 50 cows who have been injured on the streets. 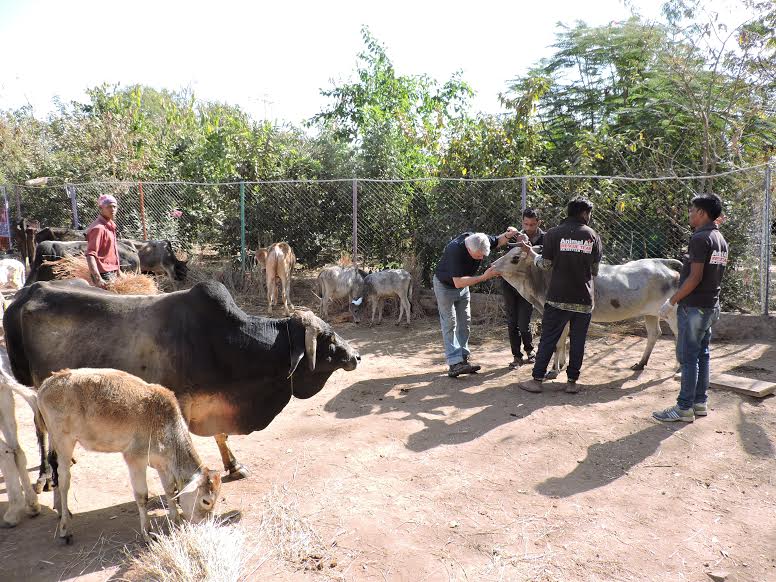 However, even more, serious than cars are plastic piles that are often mistaken for food. Cows will often wander into the rubbish piles that sweepers have created where there might be some remnants of a wedding party amidst hundreds of plastic bags, and plastic plates coated with tasty sauces and which, tragically, they mistake for food and swallows.

Often the cows and bulls we rescue come with stomachs filled with 40, 60 or even 80 pounds of plastic. In fact, many cows are pulled off the street by government cow-catchers who drop them off at a facility where they make their way to a garbage dump. 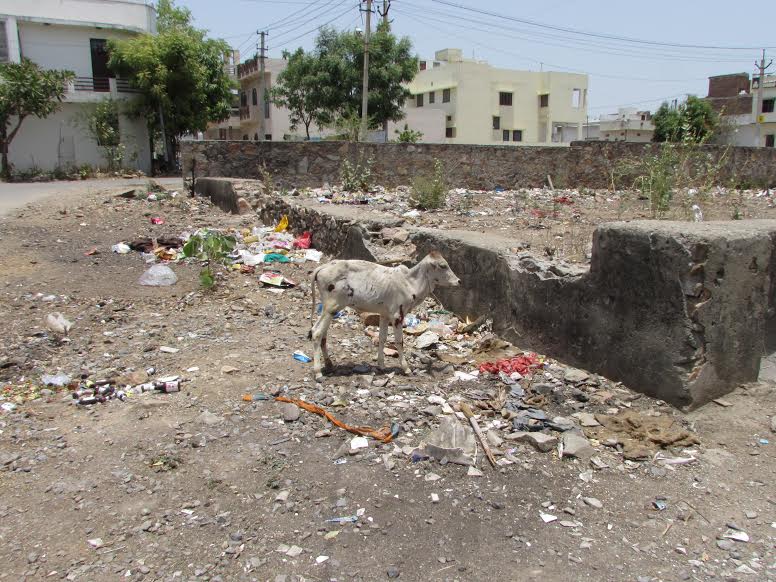 By the time someone calls Animal Aid to rescue them on the road, they are usually already starving. They are skin and bones and often appear pregnant because of the plastic in their stomachs.

Visitors and volunteers at the rescue see cows grazing on hay with bandages and splints; cows and bulls resting in the shade of trees, and sometimes, lying down on mattresses, their stomachs bloated from plastic, unable to stand.  Because it is illegal to euthanize cows in Rajasthan, we sorrowfully know that this is where some of them, sedated and in hospice, will spend their remaining few days. 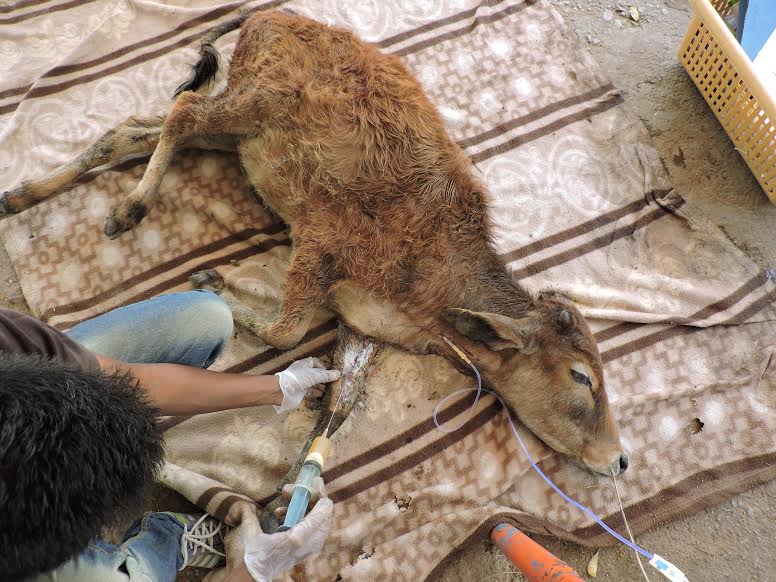 The removal of this plastic is virtually impossible. Rumenotomy – the evacuation of the contents of the stomachs or rumens – is a surgery with a high mortality rate because the delicate peristalsis (motion) of the intestinal undulations and enzyme secretions necessary to move even good food along through her four stomachs is easily frozen when traumatized by surgery.

Below, Animal Aid Rescuers Remove 40 pounds of plastic from a cow’s stomach.

Animal Aid Unlimited’s role is to treat cows for pain and suffering and to make it easy for people to visit so that through contact with cows and bulls they are better able to understand their intelligence, curiosity, naughtiness, affection and experience cows as the wonders they are.

To learn more about this organization and the work they do, check out the Animal Aid Unlimited website