After Being Tortured by Villagers, Rescued Orphaned Orangutan Gets Second Chance at Life in the Wild 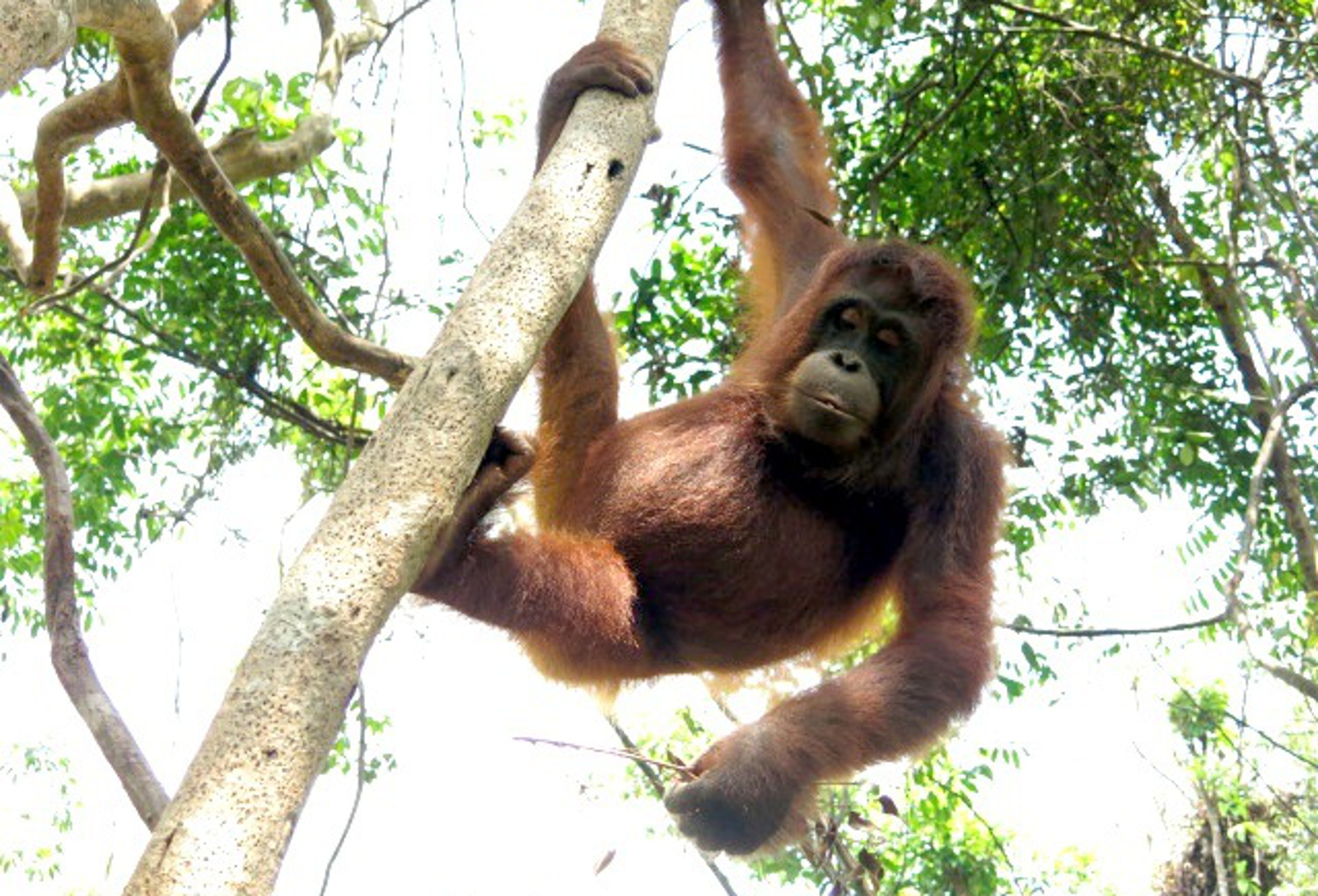 Orangutans share about 97 percent of the same DNA as humans, yet they are among some of the most hunted and exploited animals on the planet. These primates can be found primarily on the islands of Borneo and Sumatra, which also happen to be the home of ever-expanding palm oil production. Palm oil is a vegetable oil that is used in around 50 percent of consumer goods. The palm plant thrives in a tropical rainforest climate, making the native rainforest of Borneo and Sumatra highly susceptible to deforestation for these plantations. The orangutan has suffered incredibly due to the loss of their forest habitat. Unable to take shelter from humans in the rainforest, orangutans are constantly pushed into contact with humans. Seeing orangutans as a threat to palm oil crops, sadly, these gentle primates are targeted and killed by palm producers. In addition to this threat, orangutans are also endangered by the exotic pet trade.

Peni, the orangutan, knows the dangers of human-orangutan conflict first hand. When she was three years old, Peni witnessed the death of her mother who was tortured by villagers in a remote section of Borneo. The two orangutans had been spotted in the village of Peniraman after a landslide nearby forced them out of the forest. The majority of the forests in the area had been converted to palm plantations, leaving very little opportunity for Peni and her mother to take shelter. Seeing the pair of orangutans, villagers ambushed them, tied them up and started throwing rocks at the animals. After rendering the mother unconscious, they were then able to throw them both into a cage. Luckily, a vet from International Animal Rescue was able to intervene and take the two orangutans into custody. 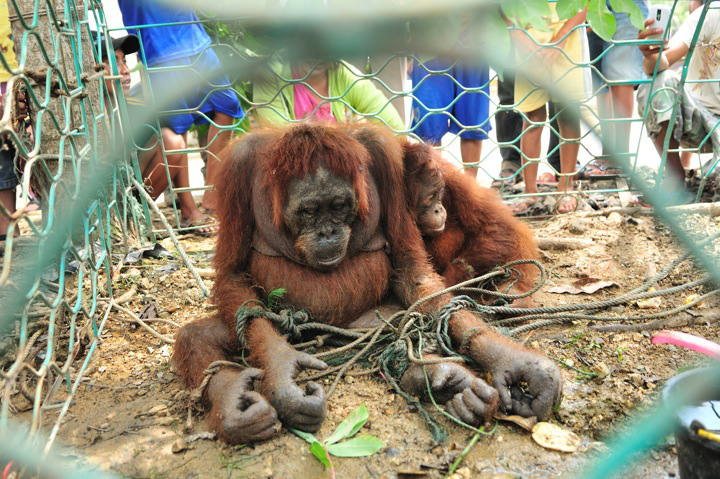 Unfortunately, Peni’s mother died from the injuries she had sustained, an experience that is just as traumatizing to an orangutan child as it is to a human. Thankfully, Peni was able to escape a similar fate due to the intervention of International Animal Rescue (IAR).

Peni came to IAR’s Orangutan Rehabilitation Center, location in West Kalimantan, Borneo in 2010. When the little orangutan arrived at the center, she was near starved and extremely distressed. Despite this, Peni was in relatively good physical condition, having escaped the brunt of the villagers’ attack. After undergoing a vet exam, Peni had to go through a period of quarantine, to ensure she was free of any disease or illness that could be transmitted to the other orphaned orangutans at the center.

Orangutans are incredibly social beings, so family and friends are very important to the mental well-being of these wonderful animals. According to her caretakers, the most difficult part of Peni’s rehabilitation was helping her “to overcome the psychological trauma.” 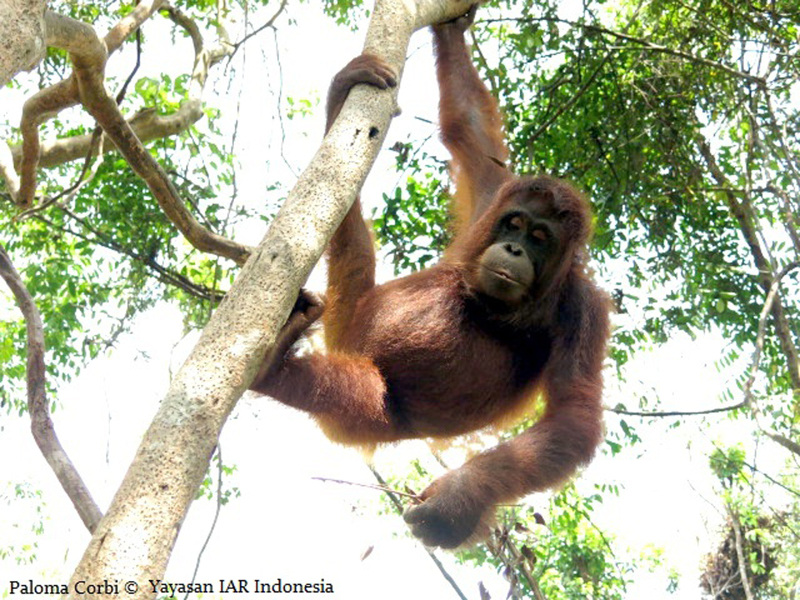 But Peni was a fighter and once she was able to join the other orangutans, she began to recover her positive temperament. The other females, Susi, Prima, and Helen became Peni’s foster orangutan family. Together, the orphaned orangutans learned all the skills they would need to survive in the wild. IAR’s Orangutan Rehabilitation Center cares for orphaned orangutans with the aim or releasing them into the wild once they are old enough and strong enough to survive on their own. 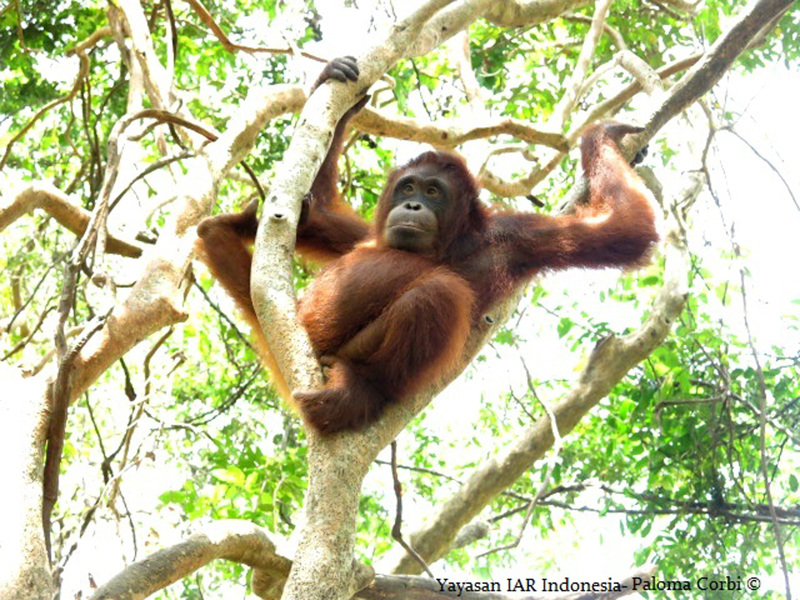 Peni’s caretakers describe her as playful and note her particular affinity for vocalizing all her emotions. Since Peni had spent the first three years of her life learning how to forage for food and climb, in the care of her mother, it did not take long for the center to deem her a fit candidate for wild release.

Back to the Wild

After spending three years learning how to make nests and play like an orangutan, Peni’s time for release finally came.

“Peni’s story was a horrific one,” states Karmele Llano Sanchez, Executive Director of IAR Indonesia. “We weren’t sure whether she would even survive the trauma of watching her mother being beaten and dying before her eyes. However, we’re thrilled to see how well she is coping with her new-found freedom. Now we just pray that she stays safe and grows up into a beautiful wild orangutan – and one day has a baby of her own.”

Peni would be the very first orangutan to be released from the new West Kalimantan center, making her debut back into wild life quite a big deal. A whole ceremony was performed in collaboration with the Government of Ketapang District and the Natural Resources Conservation Agency. Peni was released into the protected forests of Mount Tarak. The IAR team conducted a number of surveys to ensure that the area where Peni was released had ample food and resources available for the young orangutan. Her center-mates, Helen and Prima, had also been released to this area, making it the perfect spot for her release.

To see Peni’s release in action, check out the video below.


The IAR monitoring team stayed with Peni after release and reported that she was doing well, eating the local fruit, and even built a comfy nest out of leaves.

After six months on her own, the monitoring team discovered that Peni was not thriving as well as they had hoped, so she was brought back to the center for some more care. With a little more care, the IAR team hopes to see Peni return to the wild in the near future. While her transition back into the wild was not seamless, it is certainly not the end for this determined orangutan. We wish her the best of luck on her next venture out into the wild!

You can help other orangutans like Peni by checking all your consumer goods for palm oil. Most people are unaware that this oil contributes to mass deforestation and the gradual extinction of the orangutan species. See this article for alternatives to palm oil.