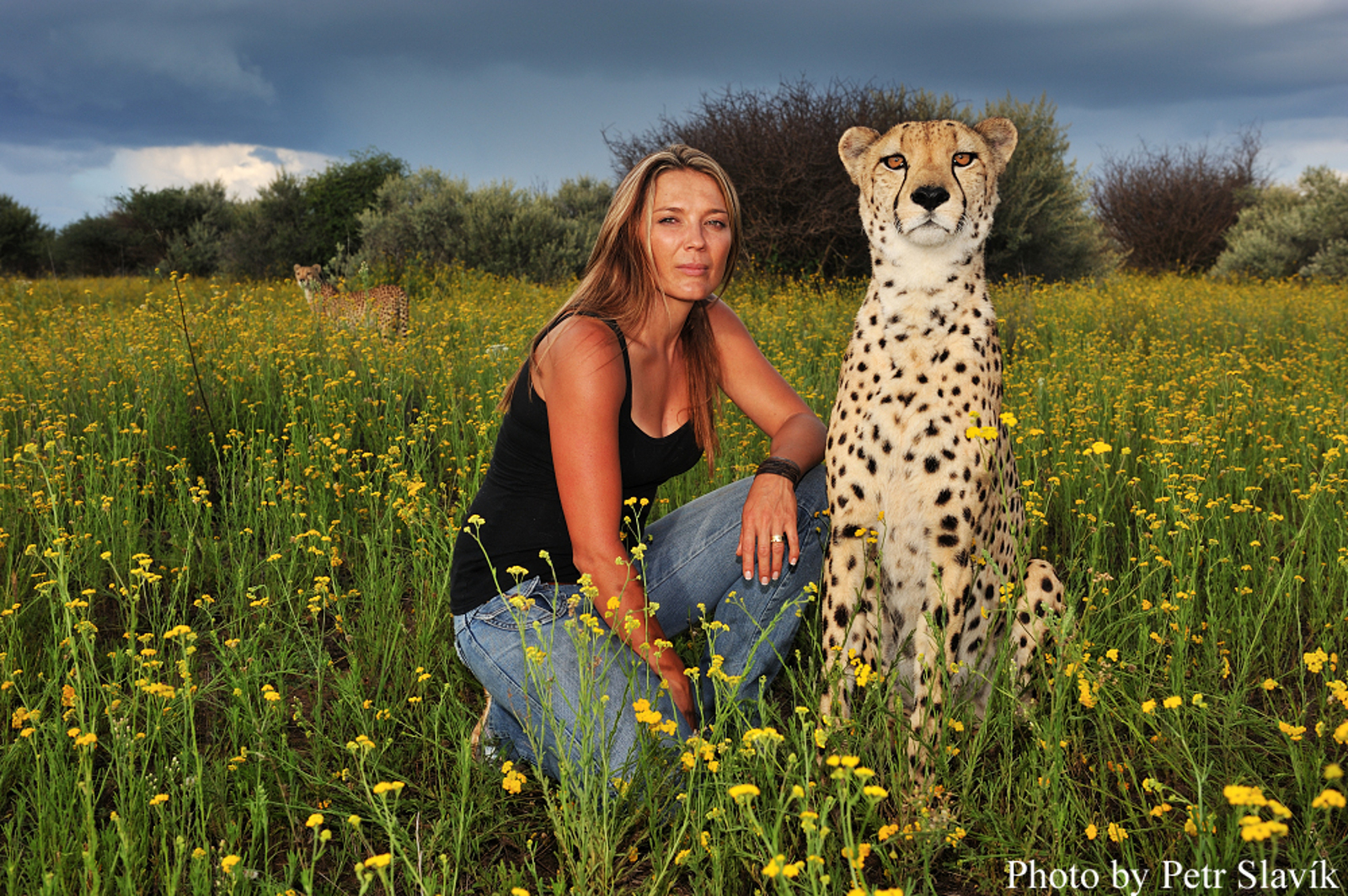 With their slender physique and tan colored body filled with black spots, cheetahs are recognizable to just about everyone. Found in Africa and famous for being the world’s fastest land mammal, this big cat is facing a threat it can’t simply sprint away from – extinction.

Today, less than 10,000 cheetahs exist in the wild. Habitat loss, the illegal wildlife trade, and human-wildlife conflict are driving this species to its end but thanks to committed and compassionate individuals, hope may be left for the cheetah.

Marlice van Vuuren, a Namibian conservationist, dedicates her life to rescuing and protecting cheetahs and many other animals, through N/a’an ku sê, the wildlife sanctuary she founded back in 2006 with her husband Dr.Rudie van Vuuren. Because Namibia has the biggest population of wild cheetahs in the world, she feels it is their duty to maintain these numbers and conserve Namibia as this conservation mecca.

One of the main goals of N/a’an ku sê is to conserve Namibia’s vulnerable wildlife. Marlice Van Vuuren will literally take in any animal that needs help, including meerkats, mongooses, baboons, lions, leopards and of course, cheetahs. But the procedure for each species’ rescue and development can vary greatly. So how does one rescue a wild cat?

“We have to take the following factors into account: their estimated age, the circumstances in which they were orphaned (what led to them being orphaned), etc. These factors determine the outcome of the cat,” Marlice van Vuuren tells One Green Planet. “If the cat is a young cub, it would need to be hand-raised, meaning that it would need to spend the rest of its life in captivity. If the cat is older when coming to N/a’an ku sê, there is a chance that the animal could be released back into the wild. In these cases, it is imperative that the animal remains as unhabituated as possible. The cats that are wild, and of a mature enough age, are released straight away.”

But it doesn’t come without its host of obstacles. If, for instance, a cheetah is semi-habituated, meaning that it has lost some of its fear of humans, this could spell disaster for the animal and lead to an increased chance of conflict between man and carnivore.

“With semi-habituated cheetahs, it is imperative that we find the right location for the animal to spend the rest of its life,” she continues. “We have to consider how and at what age the cheetah came into conflict and subsequently ended up at N/a’an ku sê. Semi-habituated cheetahs cannot be fully released back into the wild. They would need to remain in fenced areas.”

Human-cheetah conflict is one of the leading causes of this species decline as cheetahs are seen as more than just a threat to people, but also a threat to livestock.

The contentious relationship between livestock farmers and predators is an all too familiar one. In the U.S., wolves and coyotes are targeted and eradicated for the threat they pose to cattle. Similarly, in the Pantanal region of South American, Jaguars are hunted to prevent livestock losses. Sadly, a parallel situation exists in Namibia with cheetahs.

When a predator, such as a cheetah, approaches a farmer’s livestock, the farmer won’t think twice about shooting the unwelcome guest, in a bid to protect his resources. Things get complicated, however, with the fact that cheetahs aren’t the only predators hunting livestock, yet they are disproportionately targeted and blamed for losses in the country.

N/a’an ku sê helping to resolve this conflict by using innovative techniques to formulate a less destructive approach to keeping wild animals away from livestock. And their methods are proving to be very effective at preventing of deaths.

“We put lion scat (that we provide them with) in bushes and on play trees (also called marking trees). This keeps cheetahs out of that area, as lions are a natural enemy for them,” says Marlice. “And we encourage the farmers to monitor the behavior and population size of carnivores on their land.”

Other methods include building thorn barriers around cattle and livestock holding pens to prevent carnivores from getting in; using guard dogs and guard donkeys to protect smaller and larger livestock; and using sheep herders to guard livestock during the daytime.

“These methods are not drastic means of controlling carnivores, and prevent the unnecessary killing of predators,” Marlice tells One Green Planet.

Keeping predators away from farms, however, is becoming increasingly difficult as wild habitat is rapidly developed to accommodate a growing human population. The good news, according to Marlice, is that some farmers are learning to embrace the cheetah: “Farms are increasingly moving towards tourism as their main focus. This means that wild game has become more important for tourism operations, as well as maintaining pristine landscapes.”

This more holistic solution enables both cheetahs and farmers to live in harmony with mutual benefit for each.

To Marlice, conserving Namibia’s cheetah population is more than an isolated effort to save a species but draws from a desire to preserve the beliefs and practices of native cultures.

Marlice grew up with the San Bushmen, hunter-gatherer people of southern Africa, and is one of a handful of white people to speak their language. From the San, she has learned invaluable lessons that drive her mission for conservation.

“I understand and appreciate their beliefs and way of life. They are gentle people, who respect nature and wildlife, living at one with their surroundings,” she says. “Not only is their respect for nature such an important life lesson, but it teaches one to respect and appreciate different cultures. The San live in the present and don’t waste precious time worrying about tomorrow. From them, I have learned the importance of ‘today’.”

In addition to helping Namibia’s wildlife, she also wants to preserve the San community and culture, which she believes is so important.

“Discrimination, social stigmatization, and dependency prejudice make it extremely difficult for this community to elevate themselves out of poverty, and create a cycle of marginalization across generations. Furthermore, they have been forced from their original lands, which are increasingly used for grazing cattle, leaving the San unable to survive in their traditional lifestyle.”

“In a bid to conserve what is so quickly disappearing, N/a’an ku sê set up the Ancient San Skills Academy, a traditional San village, tucked away in the vast bush that makes up our reserve. San families base themselves in this traditional village for set periods, giving San children, otherwise living in the Western world and being fully influenced by a modern culture, the opportunity to experience their  fascinating, intrinsic heritage – learning  and strengthening the skills and language that their forefathers have tried so desperately to maintain.”

For Now and the Future

As a parent, Marlice believes it is important to encourage children to respect nature and wildlife.

She says, “My children are exposed to animal care every day, with different orphaned animals being in our house and living with us on a regular basis. My children are also involved with our Clever Cubs School, and I teach them to appreciate and respect all cultures.”

She holds a firm belief of hope for the future of Namibia’s wildlife. Through the sanctuary’s numerous projects, including the carnivore/human conflict mitigation research, Marlice is committed to protecting Namibia’s wildlife and preserving it for future generations.

You can support Marlice’s work by checking out N/a’an ku sê’s site and if you’d like the experience of a lifetime, why not think about volunteering at N/a’an ku sê?