Invented Fear and Injustice We Wrongly Place on Pit Bulls 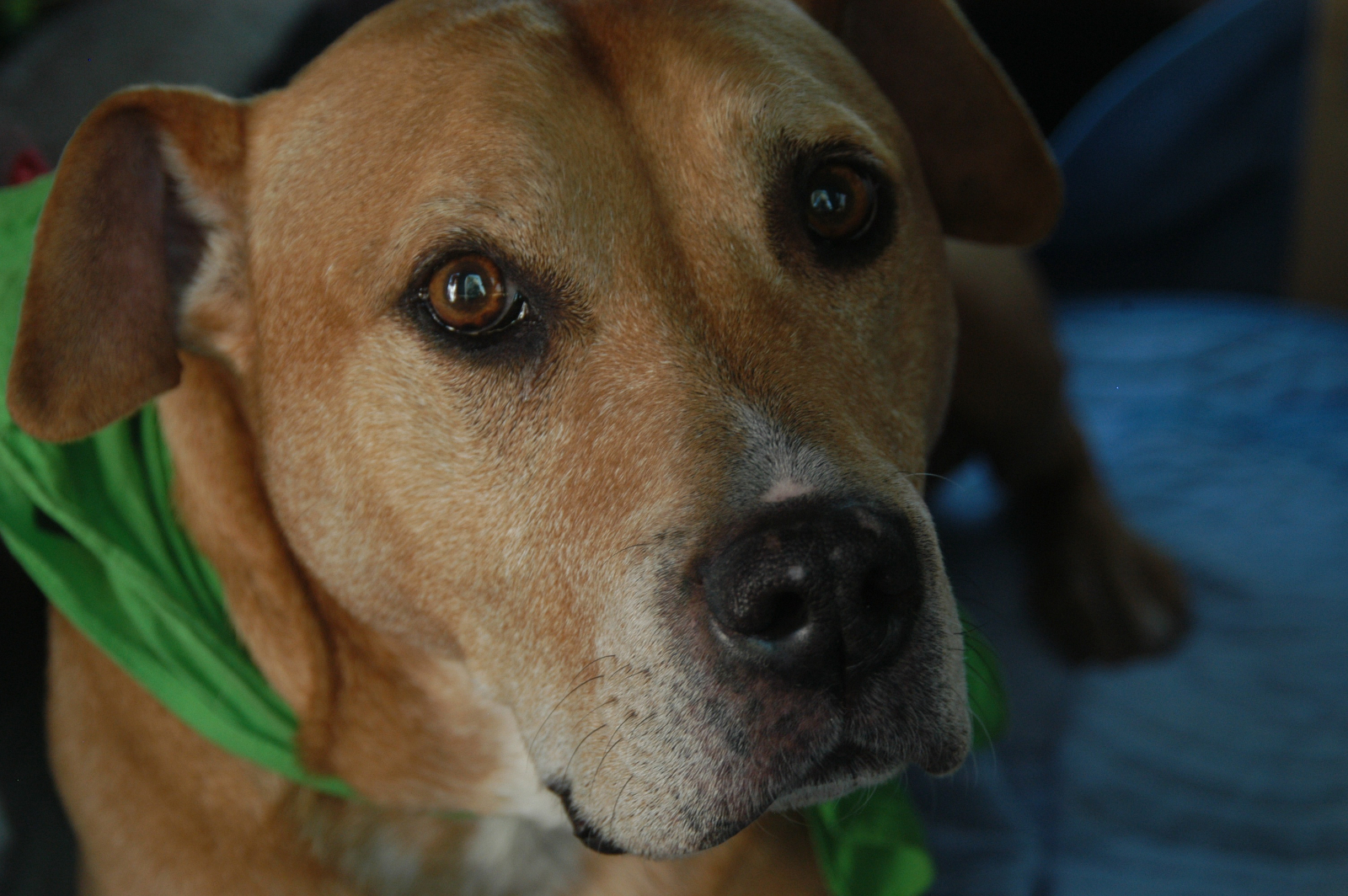 When photographer Lynn Terry aimed her camera at two pit bulls in a photo booth, a kind of mesmerizing magic happened. Gleeful entertainers Willis and Bumper were facing the camera, when Bumper, with his impressive tongue hanging out, turned to kiss Willis, and then turned to face the camera, both dogs wearing ridiculously clownish grins. The indelible shot capturing love in a photo booth transfixed viewers around the globe.

And then there’s the gripping story behind the cheery faces. Bumper, once “owned” by a dogfighter, wouldn’t participate in the blood “sport” and was saved by a young boy. Willis’ mother was pregnant with him when she was involved in the largest pit bull fighting raid in U.S. history, in 2009, when 500 dogs were rescued; Willis was born two weeks later. And since then, Bumper and the prodigiously blocky-headed Willis, whom Bumper mothers, are adored companions in a paradise of a home, where a pit bull isn’t a pariah, a murderous weapon, too dangerous to live, but a beautiful, loving, friendly, loyal, and fervently devoted family member with a hugely exuberant approach to life.

The Myth of the “Dangerous” Pit Bull

It is one of the enduring myths that only the most contemptible and boasting toughs strut around with these “dangerous” dogs or, more often, keep them as chained up, captive prisoners. And yet, like Bumper and Willis, millions of pit bulls live happily and peacefully every day with their families. They are dogs, like all other dogs, enjoying life. 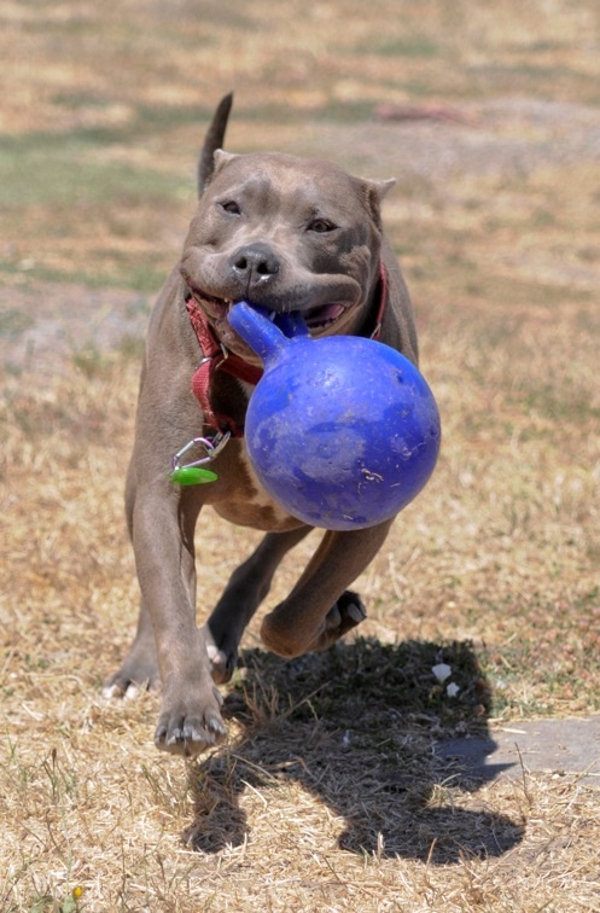 According to the American Temperament Testing Society, Inc., which tests dogs for stability, aggressiveness, and friendliness, the American Pit Bull Terrier achieved a passing rate of 86.8 percent, which is better than collies, golden retrievers, and beagles, ranking pit bulls fourth in highest passing grades of the 122 breeds tested. Pit bulls have been bred for companionship and have always been admired for their rock-solid and even temperaments.

Cindy Marabito, founder of Reunion Rescue, a nonprofit that saves as many pit bulls as it possibly can, says, “Pits were bred to be human-friendly. The goal was to be able to reach into the pit (for fighting) and grab the dog without getting bitten…. They bond to their humans and make crummy watch dogs because they are so people-friendly.” 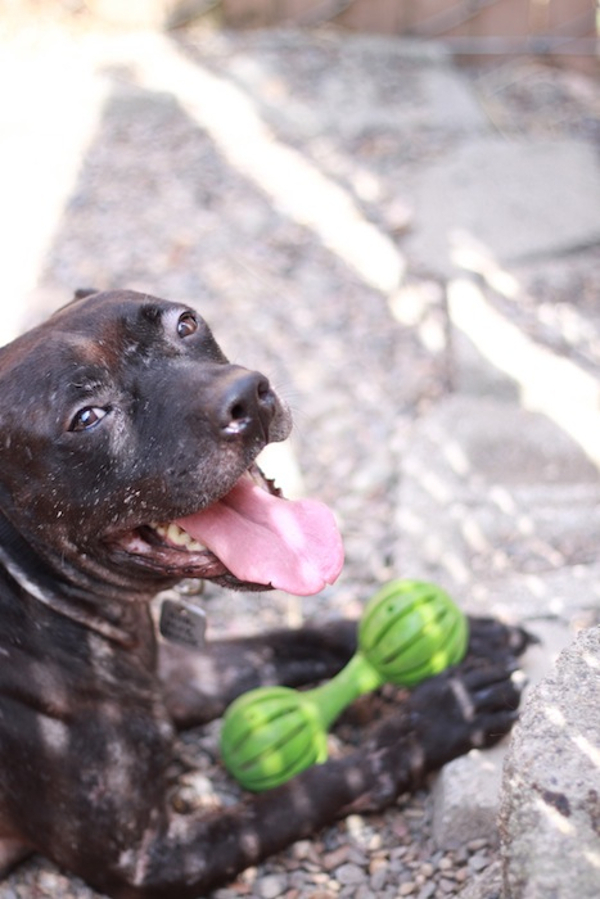 And with their legendary desire to please, pit bulls are often the dog of choice for the depraved— dope dealers, thugs, and illegal dogfighters, with their horrific mistreatment and jackboot tactics, making a living abusing, torturing, starving, and trying to make vicious these magnificent and highly sensitive dogs. Often, the most loyal are the most victimized, done in by those whom they love the most (it is well-documented that in the ring, dogs will fight to the death to please the one cheering him on). Such abusers create deadly situations, and what may provoke a dog bite is more about environment than genetics.

As Karen Delise writes in The Pit Bull Placebo, pit bulls are the targets of “every type of positive or negative emotional and physical circumstance humans are capable of imposing on dogs,” thus the emergence of “canine profiling,” or breed-specific legislation (BSL), also known as breed-discriminatory legislation (BDL), with its sudden seizures and killings of dogs in many towns and cities around the country, whether innocent or not, friendly or not, pit bulls or not. 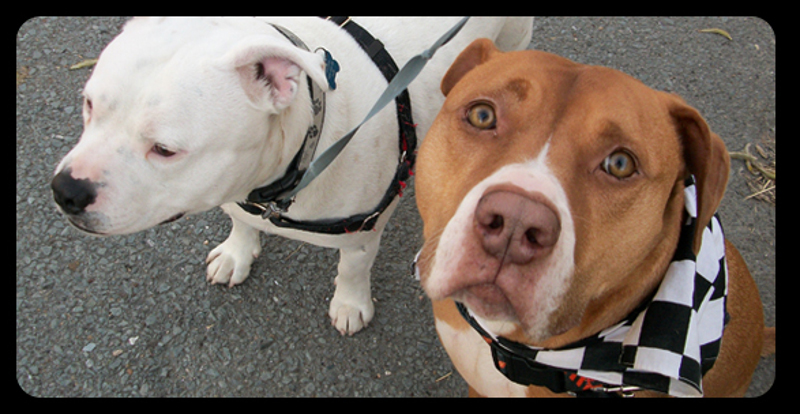 Bans don’t differentiate among the various individuals labeled as pit-bull types, belonging to the bully breed. (A pit bull is not a breed but a commonly used term to describe an athletic-looking class of terrier that includes the American Staffordshire Terrier, American Pit Bull Terrier, Staffordshire Bull Terrier, and mixes of those breeds. There are over 25 breeds of dogs who are routinely mistaken for pit bulls).

As John Adams famously said, “facts are stubborn things; and whatever may be our wishes, our inclinations, or the dictates of our passion, they cannot alter the state of facts and evidence.”

According to the National Canine Research Council (NCRC), based on a study from the Center for Disease Control, there is no scientific evidence that one kind of dog is more likely than any other to cause harm to a human being. 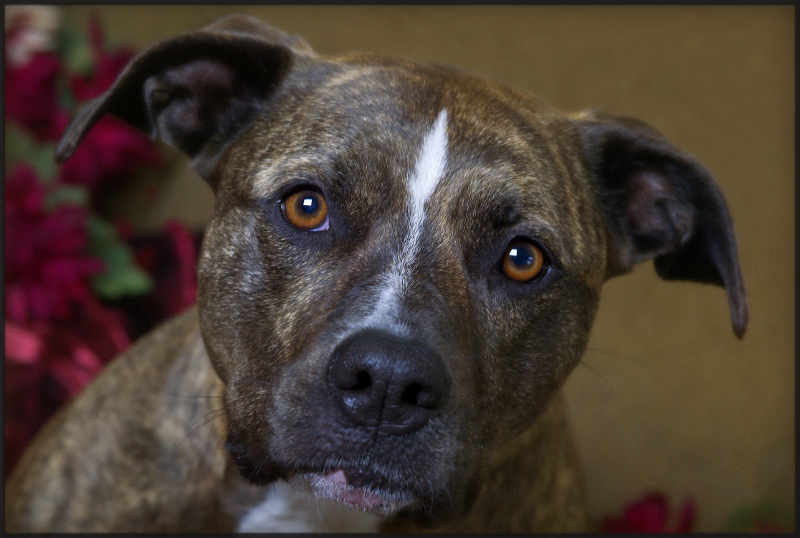 South Dakota’s Sen. Dan Lederman, who introduced the bill that will create equality among all breeds in the eyes of the law in his state, said, “The fact is, a dog’s breed has nothing to do with how the dog behaves. Dog bites are not a breed problem.”

Indeed, they are a negligent or reckless guardian’s problem. Many have long recognized that it is the humans behind the dogs who must be held responsible. As Sen. Lederman concluded, “This legislation takes the focus off Petey [the beloved pit bull from “The Little Rascals”], and puts it where it belongs”—on the guardians of animal companions. “It’s part of being a good steward for the animals in our care, and part of being a good neighbor.”

It was dogfighter Michael Vick, who awoke the world to the horrifying physical and psychological ravages pit bulls endured. With the signing of Vick, to the New York Jets, in March, Tessa Stuart in the Village Voice, wrote, “In addition to plunking down $34,000 to buy the Smithfield, Virginia, property where dozens of dogs were chained to car axles buried in the ground while they fought, sometimes to the death, in front of betting spectators, Vick and his co-defendants admitted to killing at least six (but perhaps as many as eight) dogs who did not display sufficiently aggressive traits during the ‘testing’ process. Several of those dogs were shot; at least two were hosed down, then electrocuted.”

In the backyard, there were graves of pit bulls Vick fought or had been torn apart serving as bait dogs during practice. Those who managed to survive were found beaten, starved, tortured, and chained to concrete slabs. After much public debate, they were not euthanized, because, as Malcolm Gladwell, wrote, “The betrayal of loyalty requires an act of social reparation.”

Here is the other side of the equation: the history of pit bulls is crowded with beloved companions — the iconic Petey, war heroes, poster dogs — pit bulls were so revered that the U.S. Military used an image of a pit bull on war posters — television stars, savers of lives, companions to such celebrated personages as Helen Keller, Humphrey Bogart, and Lauren Bacall, among innumerable others. 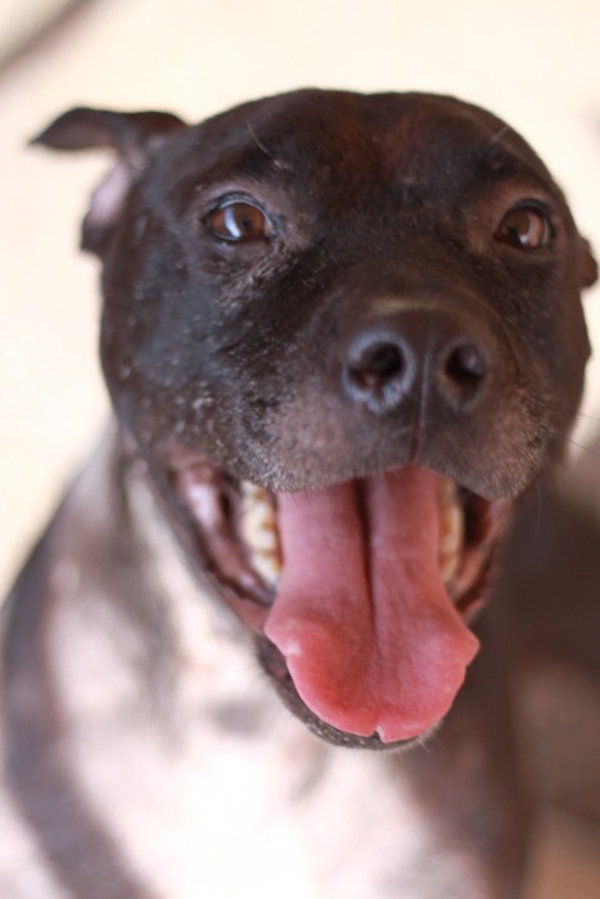 Let me enumerate all the ways in which pit bulls contribute to society: heroic and life-saving work with autistic children, law enforcement, animal-assisted therapy, search-and-rescue, nursing homes and hospital visits, drug detection, to name but a few. Mary Tyler Moore’s life depends upon her pit bull Spanky letting her know when her blood sugar gets perilously low. “He helps me with my diabetes—he can sense when something’s not right… He will come and sit and stare at me until I do something about it.”

In an act of great courage, a pit bill called Weela saved her human brother’s life as he was about to be ambushed by a huge rattlesnake, who then sunk his fangs into Weela’s face. A few years later, Weela saved the lives of 30 people, 29 dogs, 13 horses, and 1 cat. Heavy rains caused a damn to break on the Tijuana River and Weela pulled 30 to 50-pound loads of food across the river to a tiny island to feed the stranded animals the entire month they were there.

And there is Dakota, one of the most highly rated search-and-rescue dogs ever to wear a badge. Her reputation is so glittering that NASA requested Kris Crawford, Dakota’s guardian, and Dakota to assist in the recovery of the astronauts after the 2003 shuttle tragedy. Dakota and her two canine siblings, Cheyenne and Tahoe, are also certified hospital therapy dogs. Kris fiercely believes that the public needs to be enlightened about the real spirit of the pit bull. On her site, ForPitsSake.org., the banner reads: Where Heroes Are The Pits. 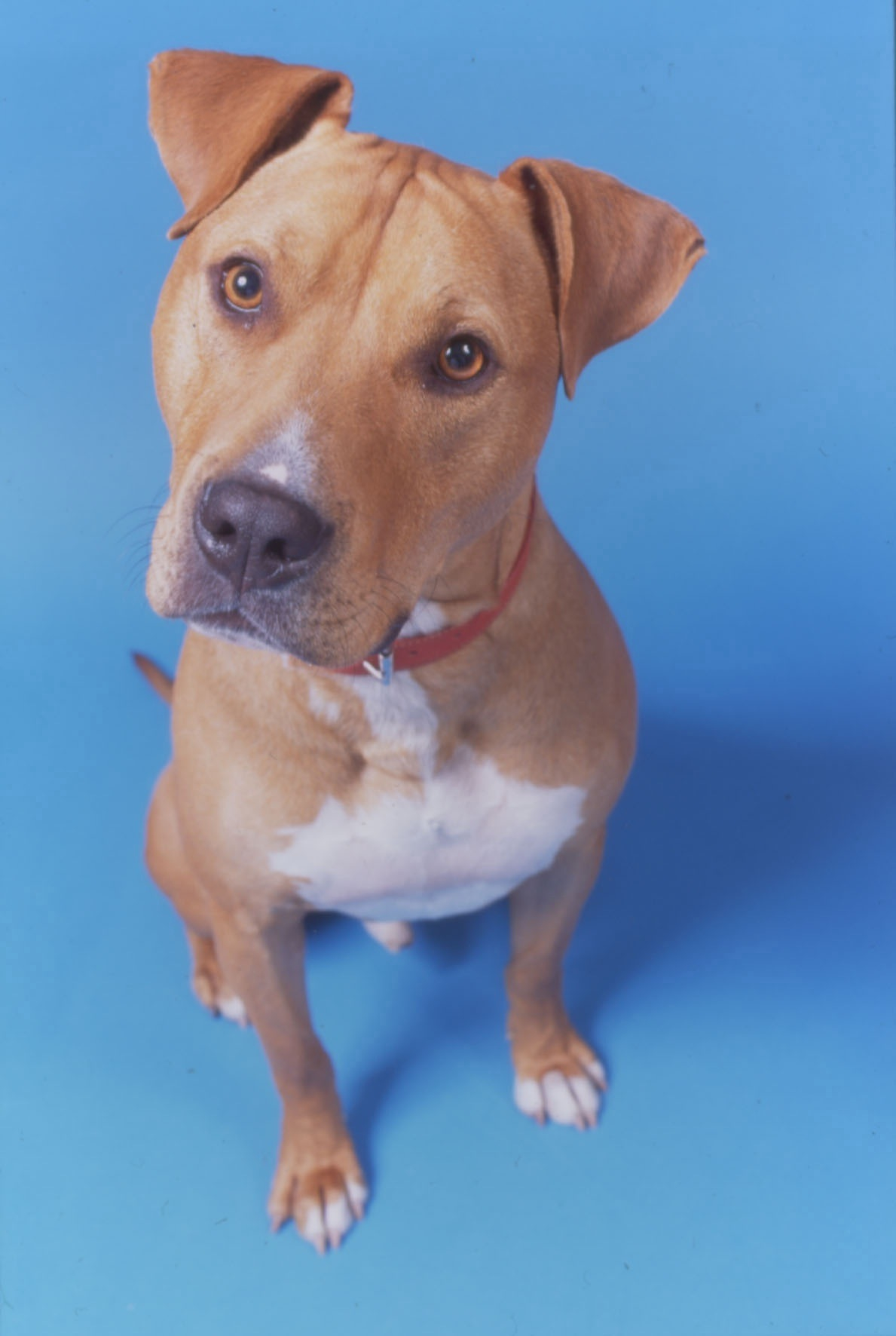 I used to take my pit bull, Brownie, with the velvety white tummy, and galactic brown eyes, dappled with flecks of gold, to the local nursing home, where he was greeted by a huge gushing of oohs and aahs and lots of cooing, where elderly hands patted his enormous head and rubbed his belly and treated him like a prince, so enthralled by his lofty status.

These elderly residents became so excited by his visit that now a few remembered their own dogs, sometimes as far back as their own childhood, and were thrilled to tell stories about them, while all the time playing with Brownie, whose tail wagged wildly as he moved slowly from one resident to the other, giving kisses and licks, making everyone feel good and loved. 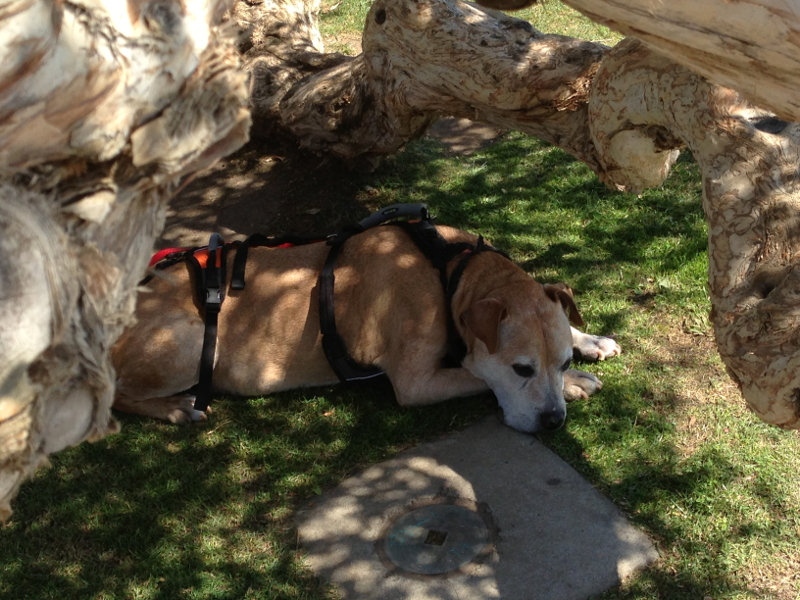 Brownie was there to please and, for these elderly citizens, this humble pit bull was a divine being, an angel to remind them of blissful reveries. Brownie passed away at the age of 15, in December, and this is my tribute to a perfect companion.