10 Years After the Bronx Zoo Ends Their Elephant Program, Happy Remains in a Solitary Prison 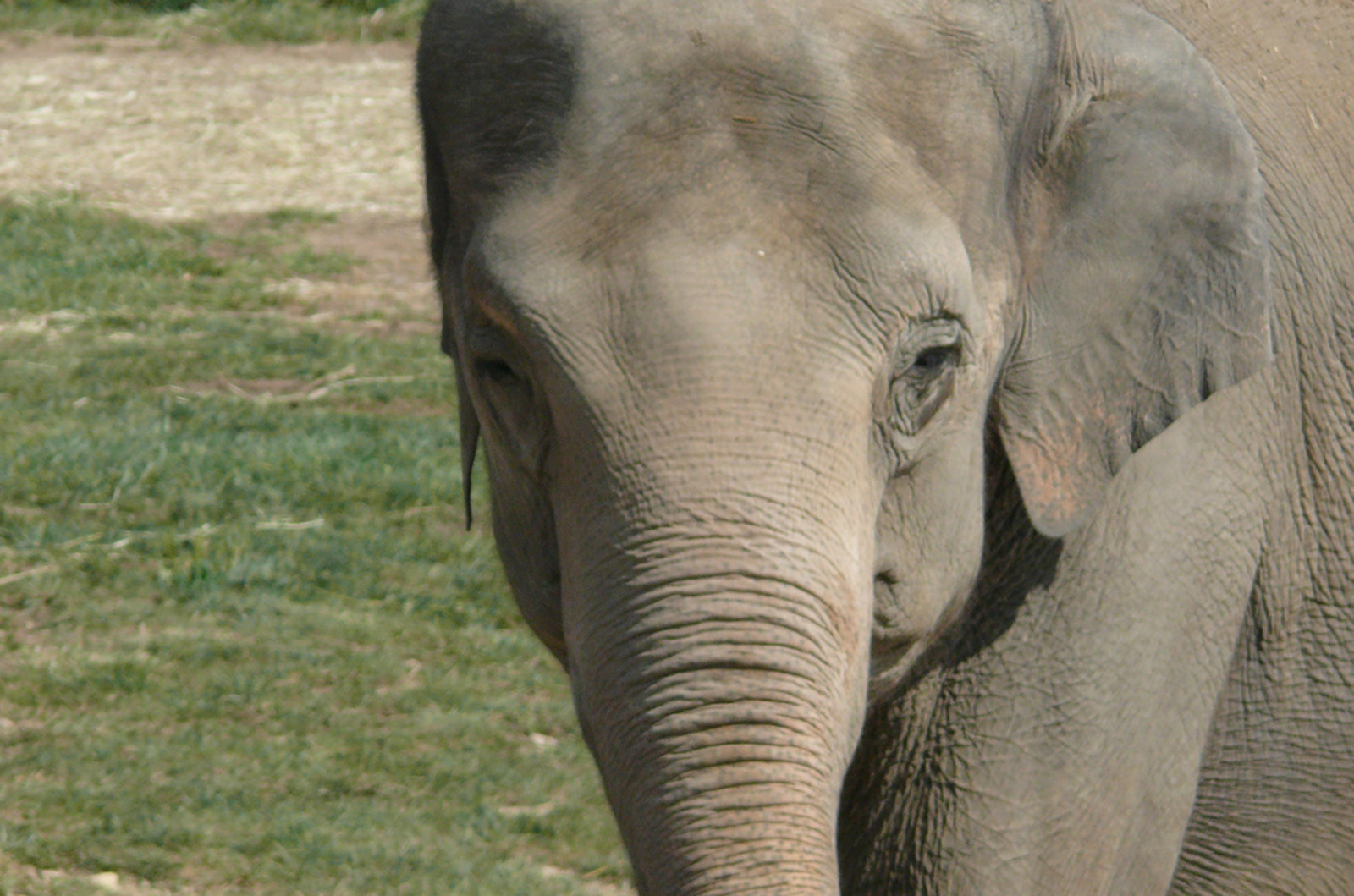 Elephants are some of the world’s most fascinating creatures. These gentle giants lead lives that bear many similarities to humans’; they form multi-generational family groups that remain loyal to one another for life and the elder elephants pass wisdom down to the younger ones to help them navigate their world. Elephants also experience complex emotions, such as grief and compassion, and they demonstrate advanced behavioral and cognitive abilities, including tool-use, self-awareness, and cooperation.

Knowing as much as we do about the complex needs of elephants, it perhaps comes as no surprise that the keeping of elephants in zoos has been the subject of controversy for a number of years. A 2008 study found that elephants in zoos could expect to live half as long as those in the wild. A 2013 study conducted by Honolulu Zoo suggested that around two-thirds of elephants in zoos in the U.S. display what are known as “stereotypies”; those are repetitive behaviors which appear to serve no useful purpose. These behaviors are considered to be indicators of psychological distress. Stereotypes are not observed in wild-living animals and are thought to be a reaction to being kept in captivity.

For all of these reasons, animal protection advocates and concerned citizens have been calling for an end to elephant captivity for decades.

So strong has the call been to bring an end to the keeping of elephants in zoos that even some zoos have begun to sit up and take notice. One zoo which committed, in 2006, to bring an end to its elephant program is the Bronx Zoo in New York. This decision perhaps demonstrates that at least some zoos may now be taking the interests of at least some animals more seriously than before. But, almost ten years after the commitment was made, the Bronx Zoo continues to hold three elephants captive. This isn’t because the zoo has gone back on its promise but because elephants have the potential to live very long lives – some of them living well into their sixties.

So, what exactly happens to the elephants in the zoo when the zoo says “No more elephants”? Noone knows better than Happy.

A Decade of Loneliness

In 1977, a young elephant named Happy was delivered to the Bronx Zoo with her companion, Grumpy. Both had been captured from the wild in Thailand and were two of seven shipped to the United States for display. After 25 years in captivity, Grumpy passed away, and the zoo replaced him with Sammie, another companion for Happy. Their time together lasted for four years before Sammie was euthanized following an illness. It was after Sammie’s death that the zoo made the decision to end its elephant program. But bringing an end to the elephant program appeared, in practice, to mean “waiting it out” until the elephants died, rather than actively seeking a solution for the animals already there. As a result, since Sammie’s death, Happy has been kept in solitary confinement; she has been alone for almost ten years. 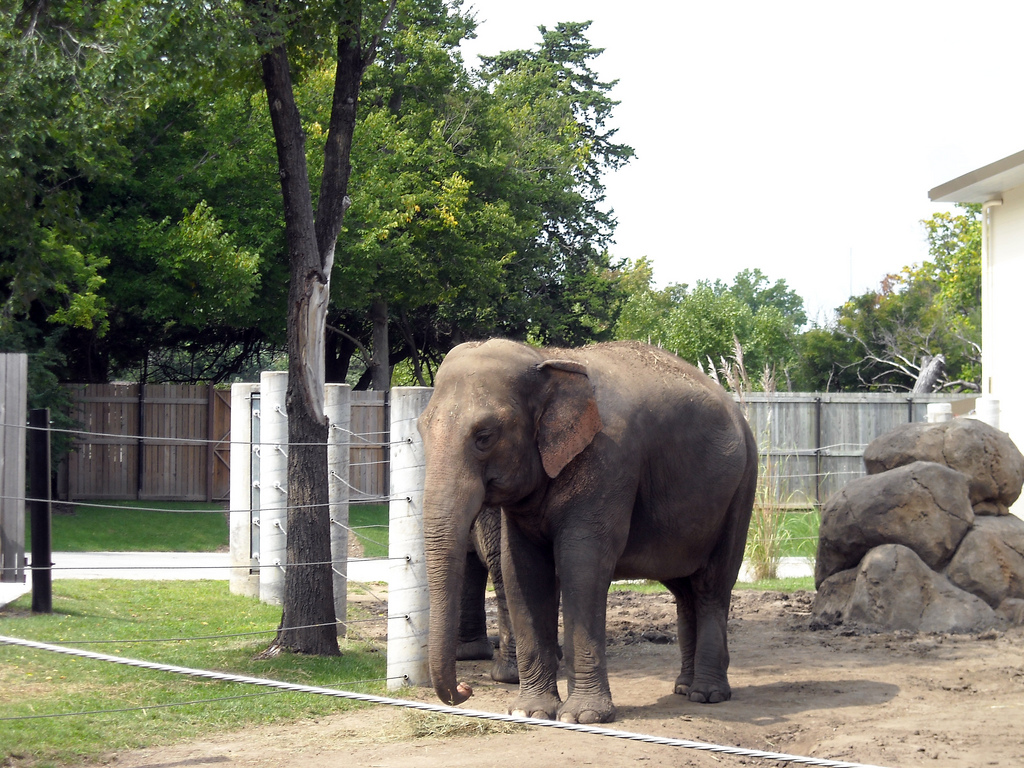 In 2006, Happy was featured in a study that aimed to test the self-awareness of elephants. Scientists draw a mark on Happy’s face and placed her in front of a mirror to see if she recognized herself and acknowledged the “x” located above her left eyebrow. In no time at all, Happy reacted by touching her trunk to the mark in confusion – proving the elephant’s ability to comprehend the fact that the elephant in the mirror was her. (You can watch the amazing video of this, here.) This was a monumental breakthrough for scientists, but for Happy, it only further proved the fact that she is far too intelligent and complex to be kept all alone in a solitary cell.

Happy’s health and well-being is constantly endangered by the fluctuating temperatures of New York and the stress of living in an enclosure that is far too small for a full grown elephant. So concerned are animal advocates about Happy, and other solitary elephants kept in zoos around the USA, that the People for the Ethical Treatment of Animals (PeTA) have threatened to file a formal complaint against the Association of Zoos and Aquariums, demanding that the zoos be stripped of their accreditation.

But even if the zoos lost their accreditation, however, the fate of Happy and the others would not necessarily mean indefinite retirement. Many advocates have made the call to allow Happy to move to a sanctuary for elephants, such as those established in California and Tennessee but, to date, there appears no appetite to do so from the zoo itself.

Change Must Start Now, but Suffering May Continue for Decades

There is no obvious solution for Happy unless the zoo itself makes the right decision and chooses to free her from her solitary confinement and send her to a credible sanctuary where she can live out her days in relative freedom. This is a process which could begin if zoo officials reached out to those who want the best for Happy and seriously considered allowing her to be moved, yet, none such movement has been made. Happy’s sad story is a poignant reminder that keeping elephants in zoos will not be phased out overnight and even if all the zoos made the right decision tomorrow, elephant-free zoos are still decades away while those already in captivity live out their lives.

What seems clear is that the first step needs to be taken if Happy’s suffering in captivity is ever going to end. The Bronx Zoo is incentivized to continue  holding Happy captive because her presence still draws visitors who are willing to pay to see her. We can all take action to help this establishment act in the best interest of this suffering elephant and make good on their promise to phase out their elephant program. They might have put an end to breeding and acquiring new animals, but the continued existence of the elephant exhibit certainly does not spell and end to their captivity.

Happy is just 44 years old. She may live for another 20 years. Right now, we can hope for a happy ending, or we can help her find the ending she truly deserves by lend our own voices to her. You can help Happy by refusing to attend the Bronx Zoo – or any other zoo for that matter – and sharing what you’ve learned with others. When the funds to see this elephant run out, the zoo will have no choice but to make good on their promise. You can also help by signing this petition to send Happy to a sanctuary and checking out the Free the Bronx Zoo Elephants community on Facebook.

Together, we can work to get this deserving elephant a truly happy ending.

Lead image source: marada/Flickr (the elephant featured is not “Happy”)