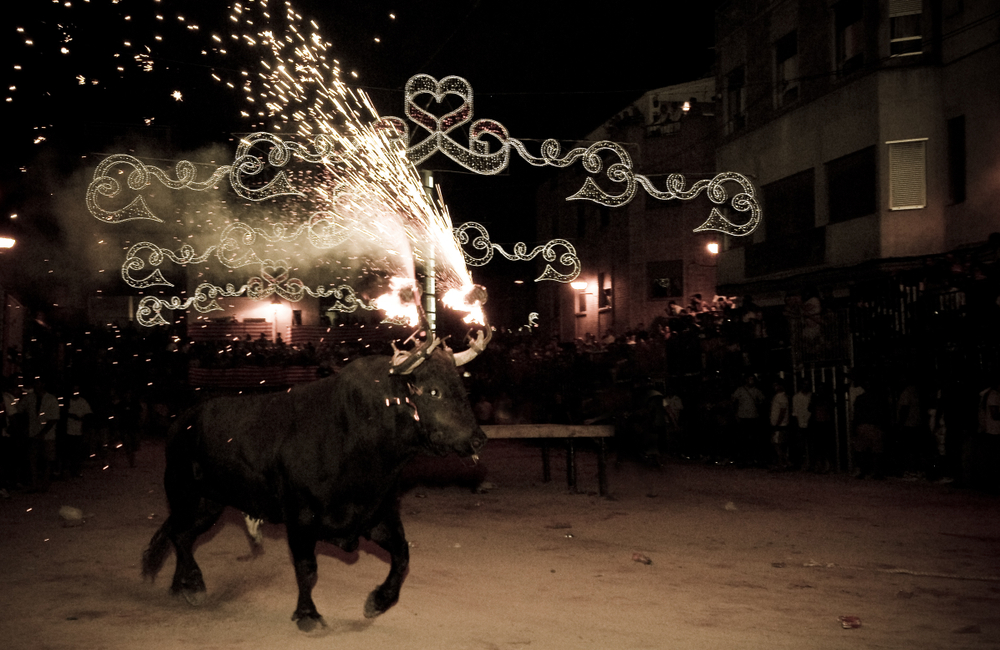 In some cultures, bulls suffer so much for the entertainment and pleasure of bystanders. It’s hard to grasp why the pain and torture of an animal is exciting and fun to watch, but it’s been ingrained in some cultures as traditions for a very long time. In countries like Spain and France, bullfighting is very common. The animals are tortured by a matador, which translates to killer, because that is what happens to them after much torture… they’re killed. Videos like this one of a matador wiping a bloodied bull’s tears before killing him and this one of a matador brutally and repeatedly stabbing a bull prove that this bloodsport is plain cruel.

The suffering of bulls doesn’t end at bullfighting though. There are also festivals and events in which the poor bulls are tortured and treated horribly. There are running festivals, at which a bull once broke his hind legs and was captured in heart-wrenching photos and videos dragging himself. Another festival is so cruel it was banned by the Supreme Court.

There’s another horrifying festival in which the bull’s horns are set on fire called Toro de Jubilo, and is also known as Fire Bull Festival. A few days ago on November 16th, the town Medinaceli in Spain celebrated this cruel festival, but animal rights organization AnimaNaturalis infiltrated to expose the horrors of this event. They took footage and shared it online to show the world.

Warning: the video below contains distressing content. Please use discretion!

The video is truly difficult to watch. As explain in the description of the video, huge balls of hay and a table are put on the bull’s head. It’s set up with cords and wires. The bull is immobilized so that the fire will not embrace his entire body. Then he is released while the contraption on his head blazes. The purpose is for the bull to struggle with the fire so that the mud around him can create smoky visuals.

AnimaNaturalis shared a photo of the poor bull on Twitter. His name is Tudelano and he’s marked with the number 31 on his ribs. They recall that the audience was shouting obscenities cursing the bull as he struggled.

If you are as devastated as we are and want these cruel fire bull festivals to end, sign this petition!

Lastly, being publicly-funded gives us a greater chance to continue providing you with high quality content. Please consider supporting us by donating!Pere