These 2 Farm Sanctuaries Are Making a Huge Difference for Pigs 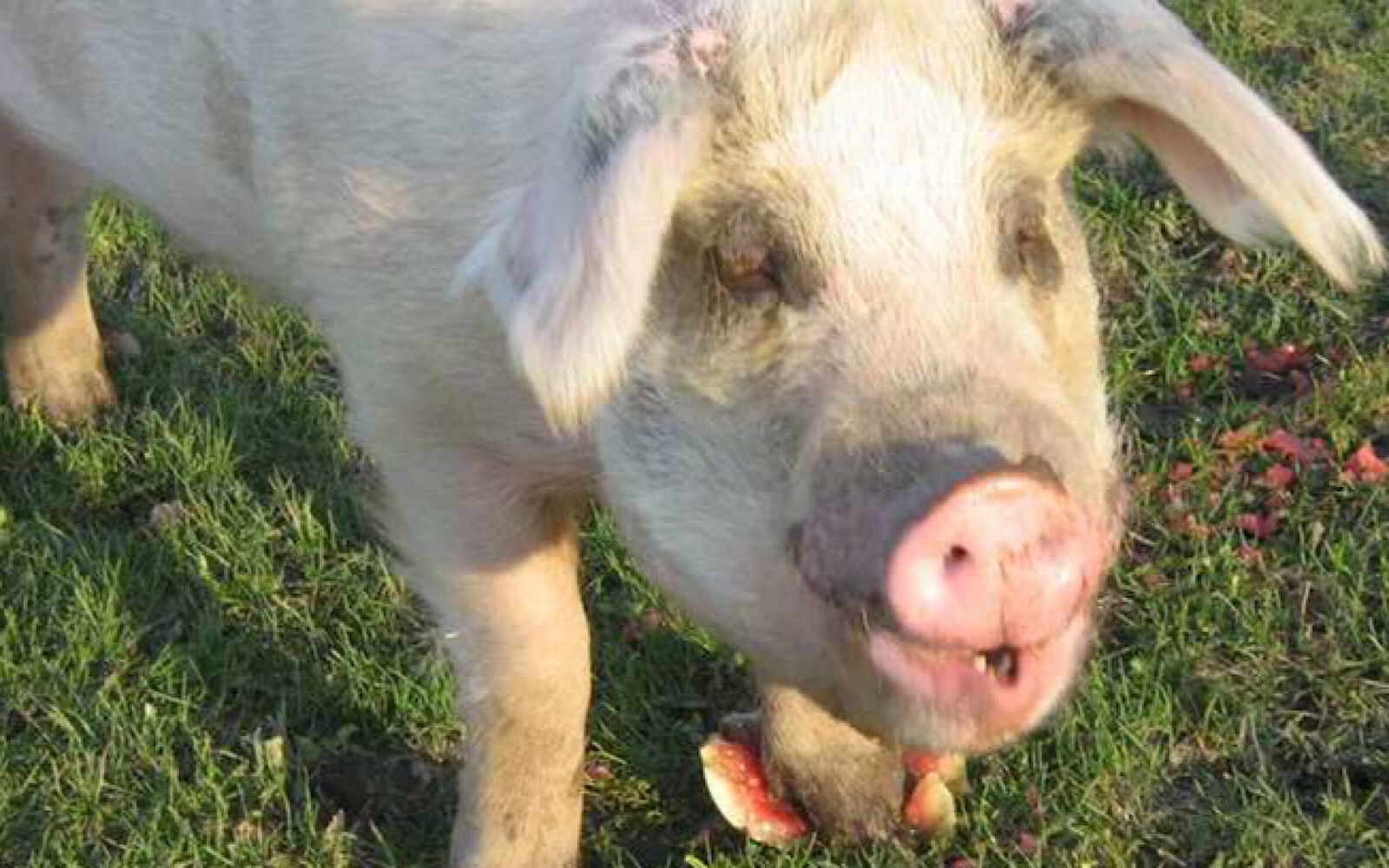 In a perfect world, there would be no need for the existence of farm sanctuaries. Unfortunately, reality makes them a necessity. Thankfully, these sanctuaries offer a life filled with peace and compassion for animals raised for meat, eggs, and dairy that would otherwise suffer inconceivable cruelties in the name of human greed.

Mass production has led to the exponential growth of the factory farming industry whose very essence encompasses torture, neglect, and abuse for the animals held within its walls. Most will spend their lives confined, unable to move or exhibit any natural behavior. Their death will be no less miserable.

Others that were once people’s pets and companions find themselves discarded when they are no longer needed or simply have grown too large. The small percentage that are fortunate enough to follow a different path are those who will know nothing but love and understanding thanks to the dedicated people behind farm sanctuaries all over the world. Two such sanctuaries have opened their doors to the curious, intelligent pig – The Pig Preserve and Ruby Ranch.

Pigs are routinely classified under two categories – the mini pig (which is really a potbelly) or the commercial farm pig. This further leads to the misconception that potbelly pigs remain small, and therefore are the ideal “pet pig.” Sadly, many of these pets will soon find themselves abandoned and in need of a new home simply due to the fact that their humans were unprepared to handle a large pig.

The Pig Preserve, located in Tennessee, is working hard to remove the stereotypes assigned to pigs by breaking down the barriers between pets and livestock. To them, all pigs share the same needs – freedom to roam, places to root in the dirt, and a peaceful life. Even potbelly pigs require space to express their natural instincts. Sadly, many have been forced into a role as companion animals … a role they were never designed for. These smaller pigs were once sought after as the fad pets of the 80s and 90s, and they are now the latest disposable pets of our culture; dumped on the side of the road, left at animal shelters to be killed, or abandoned in state parks to be attacked by dogs or shot by authorities as nuisance animals.

The concept behind this sanctuary is an innovative one based on the idea that pigs should be allowed to live as pigs, to roam and root as they please.

Pigs joyfully roam the property at The Pig Preserve. 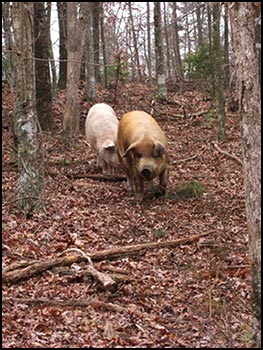 The Pig Preserve has taken in a number of pigs over the years – from potbellies to large “farm” pigs. One such rescue is that of a young pig named Petal. Saved from a dead pile on a factory farm, Petal arrived at The Pig Preserve suffering from a severe infection and no functioning immune system. Although her life was short, she thankfully got to experience love and understanding in the end, and she formed a strong bond with another farm pig named Baby. A tribute to sweet Petal can be viewed here.

Ruby Ranch, located in Ontario, Canada, was born out of the realization that there was a great need for a sanctuary for all pigs. Named after their first rescued potbelly pig, Ruby, this safe haven now provides a home to all pigs in need. Ruby Ranch understands the ongoing epidemic of potbelly pigs who were initially adopted as babies, and how most people have no idea how big they will get, what to feed them, what their needs are, or even if they are legal in their area. Some pigs are bought as gifts for children, and when the children lose interest, the pigs are forgotten and discarded. Some pigs were tossed away by petting zoos, who had no desire to care for a full-grown potbellied pig when it’s the piglets that the public wants to see.

Not only were the small potbelly pigs at risk of being discarded, but the large farm pigs were also in need of rescuing. Like the cute little potbelly pigs, people are in the habit of saving piglets from auctions and farms only to realize just how big the animals would eventually get. Thus, the need for a suitable environment to house 600-700 pound pigs was great. Harry is an example of this.

This is Harry happily chomping on watermelon at Ruby Ranch 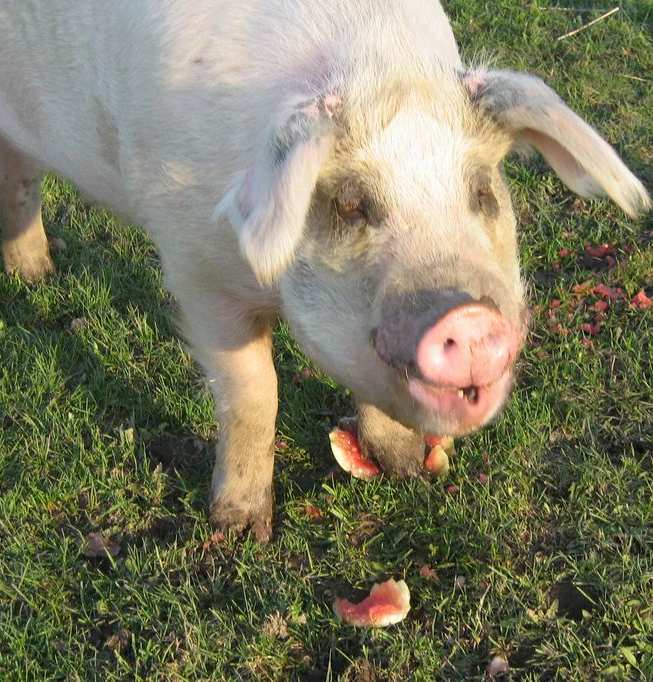 Harry began life as someone’s pet. Sadly, his human companions did not do the necessary research and had no idea just how big the cute little piglet would eventually get. They overfed Harry to the point that he could no longer be handled. He soon found himself in constant confinement in a small 10 x 12 foot shed – far removed from all of his natural instincts. Thankfully, he was pulled from this situation and taken to a sanctuary where he was brought back to health. Not only was he allowed the freedom to be a pig, but he also formed a strong bond with another pig named Willa. Both made their way to Ruby Ranch in April of this year in order to provide the other sanctuary additional space to rescue more animals in need.

Thanks to these pig-specific sanctuaries, these animals are getting the chance to lead lives that the majority of their species don’t. Most people assume that pigs are unintelligent animals, but in reality, they have outsmarted three-year-old children and can learn tricks just like dogs can. If you want to help disprove these false ideas about pigs and help protect them, consider the following:

Do not classify pigs in their assigned categories – mini and farm. All pigs share the same traits and require the same freedom to live life in peace. If you chose to adopt a pig, make sure to do your research. Do you have the appropriate environment for a pig, space, the time, and proper zoning? Why not sponsor a pig at a farm sanctuary and donate towards their monthly care? Supporting the tireless efforts of sanctuaries such as The Pig Preserve and Ruby Ranch will make a difference in the lives of so many pigs. Educate yourself and others. Leave these gentle, sentient beings off your plate by adopting a cruelty-free lifestyle. Pigs have as much right to live in peace as we do.