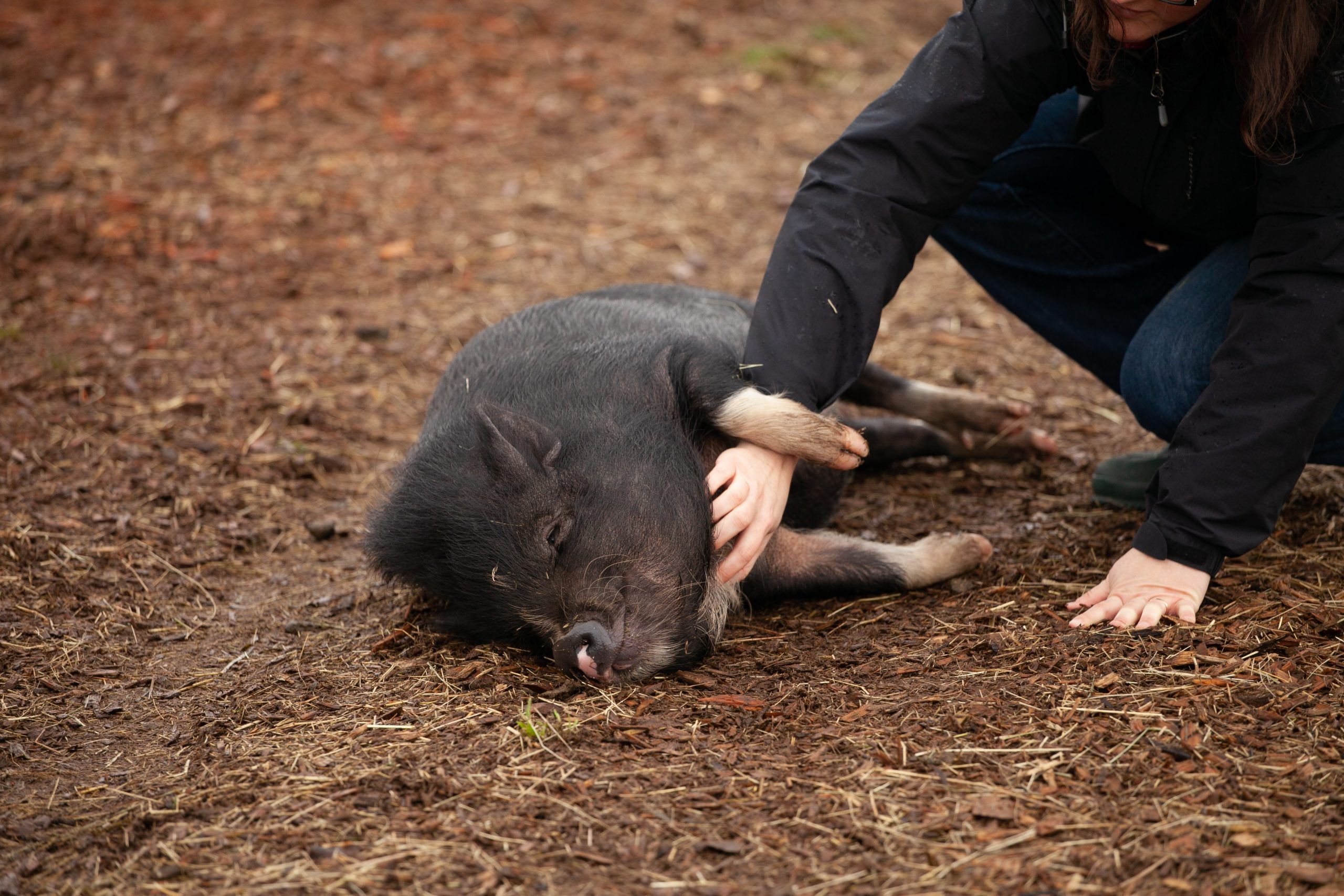 If you’ve ever had the chance to go on a farm sanctuary tour, you’ll know that there are few things more satisfying than seeing rescued farm animals flourishing in safety and happiness. These sanctuaries offer people the unique opportunity to see farmed animals outside of the agriculture industry. For some people, touring farm sanctuaries is their first time encountering the living, breathing animals used to make their food.

Because of this, many farm sanctuaries use their tours as a way to raise awareness of the harms of factory farms and the importance of adopting a vegan lifestyle. By offering visitors the opportunity to interact with farm animals, their hope is that people will think twice before eating these animals afterward. But one question remains: Are farm sanctuary tours an effective way to promote a vegan diet?

Like many animal protection organizations (including Faunalytics), farm sanctuaries often find it difficult to measure the impact of their activities. The question is: how do we know whether teaching people about factory farms, animal exploitation, and veganism during a sanctuary tour will convince them to go — and stay — vegan?

Recently, the Faunalytics team set out to answer this question. We teamed up with Farm Sanctuary, a well-known animal sanctuary organization in the U.S., to learn whether their tours lead to attitude and behavior change in support of farm animals.

We surveyed over 1,200 people who visited Farm Sanctuary’s New York and California locations to learn their attitudes toward farm animals and their intentions to go veg or reduce their meat consumption. We analyzed whether people’s beliefs and behaviors were affected by going on a tour, and we conducted in-depth interviews to gain a better picture of people’s reactions to their tour experience.

What Did We Learn?

Our Farm Sanctuary Study reveals some great news: We learned that attending a tour can lead to lasting attitude and behavior change benefitting farm animals! Here are some of our most exciting findings:

For sanctuary tour providers, this is further evidence that your programs are making an important difference in the animal advocacy movement.

How To Make Tours As Effective As Possible

What makes a sanctuary tour change people’s hearts and minds? There are several key takeaways from our study that suggest the main components of an effective, advocacy-driven tour.

First, when we asked participants what inspired them to make dietary changes, many people attributed it to the experience of interacting directly with animals. This means that offering quality time with your resident farm animals is important. However, it’s important to make sure that you continue to prioritize your animals’ needs, and to offer interactions on their terms. After all, your sanctuary is first and foremost their home!

Second, we found that balanced messaging is critical. To be as effective as possible, consider combining fun and light-hearted messaging about your animals with educational messaging about animal cruelty and the realities that these animals face in the animal agriculture industry.

Finally, it’s important to make it easy for visitors to take immediate action after finishing their tour. For example, Farm Sanctuary offers vegan concessions, and you can also consider handing out vegan pamphlets and free, plant-based recipe ideas. In other words, take advantage of your audience’s attention and willingness to change to drive the message home.

Overall, our study shows that the experience of going on a farm sanctuary tour can help people form meaningful connections with animals in a way that is not possible through other outreach activities. As such, in addition to being a fun, family-friendly activity, these organizations also play a key role in vegan advocacy! Whether you’re an established sanctuary or an up-and-coming organization, thank you for the hard work you’re doing to make the world a better place for animals.

For further information about this study, check out Faunalytics’ website. If you’re looking for more animal advocacy insights, have a look at our other original studies and the thousands of animal-related study summaries in our research library. Happy reading!