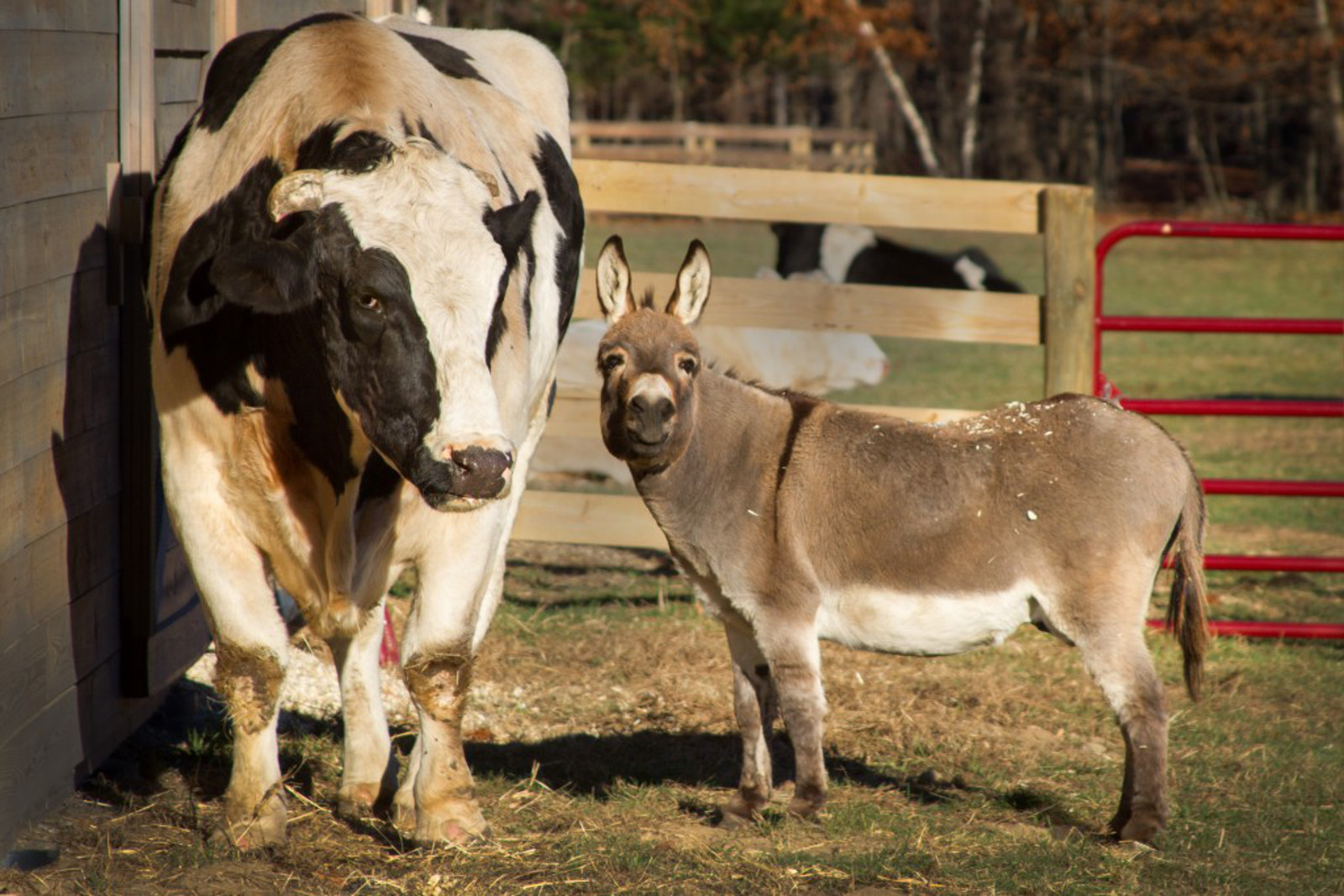 There are few things that can make people smile more than seeing unlikely friendships between animals. Not only does it make us feel all warm and fuzzy, it also reminds us that animals seek affection, just as people do. And when animals are forced to grow up in deplorable conditions, the need for a friend is even more important. Lots of people can agree that

Lots of people can agree that life in a factory farm is horrible for animals.  But did you know that many animals are suffering in the places many families visit? One such place to consider is petting zoos. That’s where Caesar, a steer, and Yoyo, a donkey lived in filthy pens filled with manure and rotting food.

According to Woodstock Farm Sanctuary, which rescued the animals, Caesar and Yoyo were kept in “woefully inadequate shelter,” with no rooms to run, grass to eat and were suffering from nutritional deficiencies from lack of proper nutrition. When their New Jersey petting zoo closed in November, the steer and donkey would have likely been sold for slaughter. Instead, they were given new lives at the sanctuary and are totally BFFs. 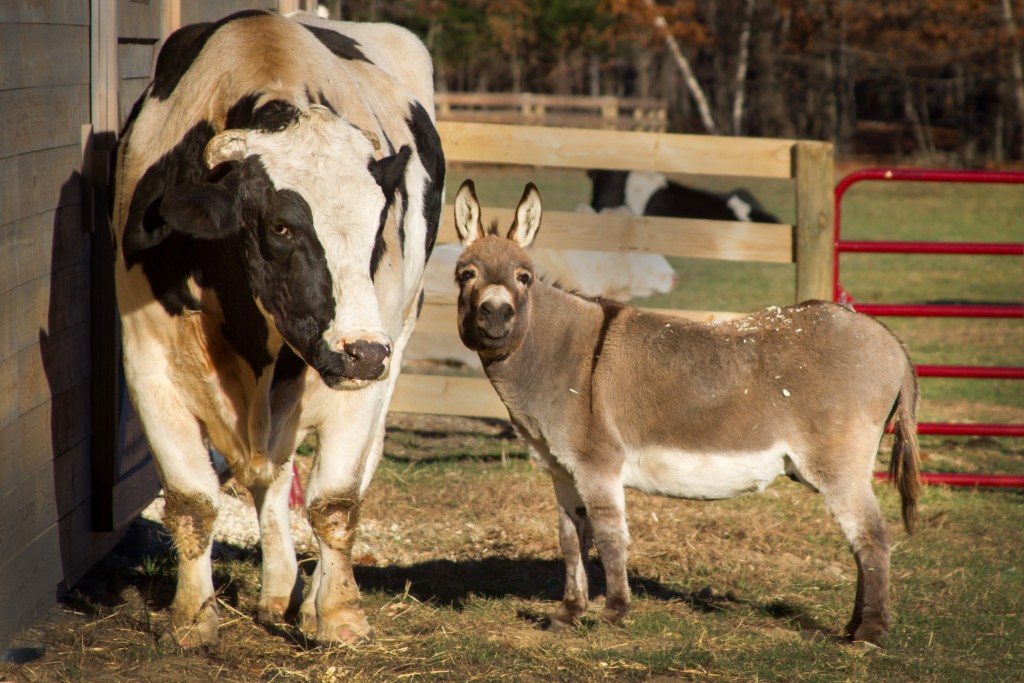 For five years, Caesar and Yoyo were kept in a small pen together where they stood in each others waste and suffered from neglect. However, the pair was among several animals that were rescued from a petting zoo in New Jersey in November of 2015. Woodstock Farm Sanctuary also rescued four goats, a sheep, and two hens. The petting zoo was part of a public attraction for a farmer’s market, which had been scrutinized by both visitors and staff members who witnessed the poor care for these animals over the years. According to the sanctuary, staff members had repeatedly complained about the animals’ treatment  Thankfully, the market was closed down in November 2015 and all of the animals have been given a chance at a better life in Woodstock Farm Sanctuary.

Caesar stands in the small, filthy pen where he lived for five years. 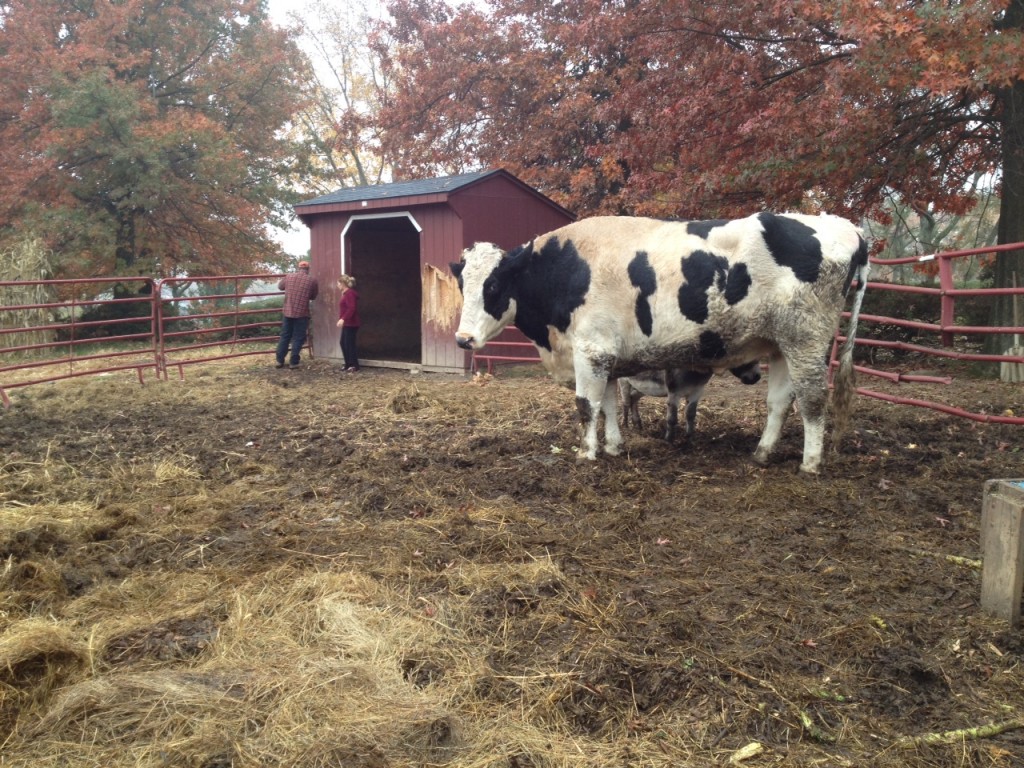 These days Caesar is happy to able to walk around freely. He enjoys being hand fed and his huge size sits in contrast to his sweet demeanor. Rescuers said that Yoyo is as spunky as can be and can be seen running through the pasture, enjoying the new space, and freedom. Yet after every run, he always ends up at the side of his much larger companion. Yoyo can often be seen tucking his head under Ceasar which makes us believe these two will always be close no matter how much space they have!

Don’t mind me, buddy. Just getting cozy under your leg – as usual. 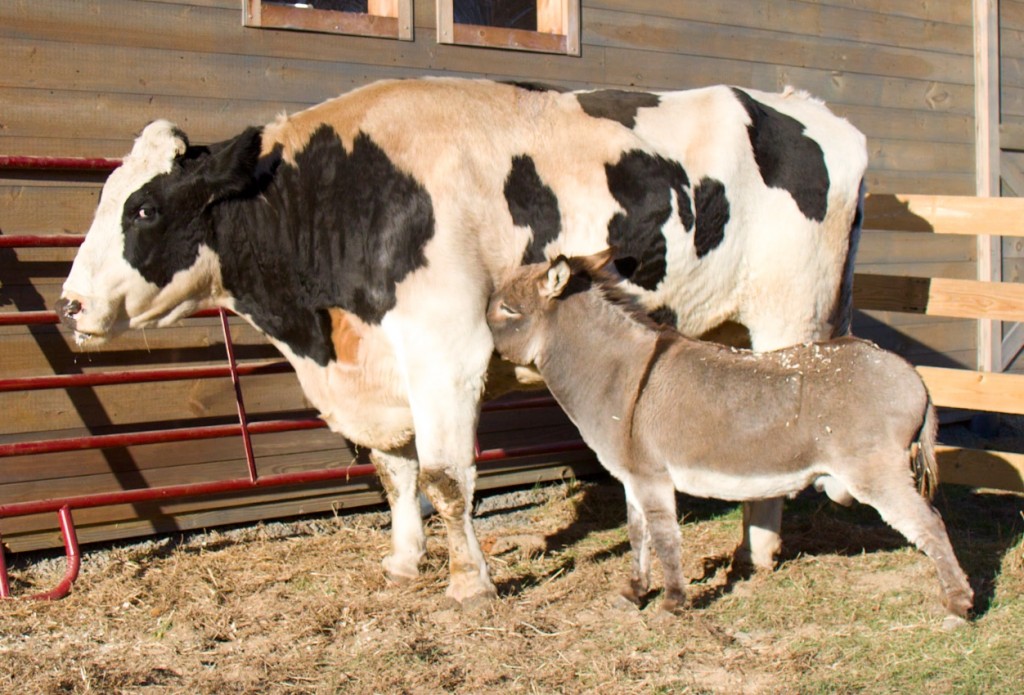 The overarching theme of most country fairs, where petting zoos are popular, is to promote agricultural practices in a favorable light, even though most of these animals are raised for slaughter in horrendous factory farms. The best thing you can do to help animals like Caesar and Yoyo is to not visit such entertainment establishments. These roadside attractions are fueled by dollars. Without financial support, they can’t continue to take in animals.

If you see poor treatment at your local fair, report it.  Educate yourself and others by sharing this post and starting a conversation around the hidden cruelty of country fairs. Instead of using those few bucks to visit a petting zoo, consider donating to a sanctuary that cares for the well-being of the animals, not the well-being of their pockets.

Woodstock Farm Sanctuary, where Caesar and Yoyo now live, is driven by “the simple philosophy that kindness and respect to animals is our duty and that all the creatures that share this earth are here with us and not for us.” This 100-percent donor funded organization provided Ceasar and Yoyo with a large pasture to play in, nutritional food to eat and a good bath to get off all of the manure that was stuck to them from living in such filth.  Most importantly they now have the dignity of not being treated as objects and will live out their lives in happiness together. Their friendship reminds all of us of the power of friendship and the kindness of people.