Factory farms crowd thousands of animals into tiny enclosures and these living, breathing creatures become little more than commodities. Because animals are raised in horrendous, filthy conditions, factory farms work their hardest to keep the public from learning the truth about what these facilities are really like.

In an effort to raise public awareness about factory farms, Last Chance for Animals has created a 360 degree viewing experience, called Factory Farm 360, that allows people to see what life in factory farms is really like. So far, Last Chance for Animals has created 360 degree experiences for life inside pig farms and chicken farms.

In the pig farm you see sows in gestation crates. These cages are so small that the female pigs will never be able to turn around for their entire lives. 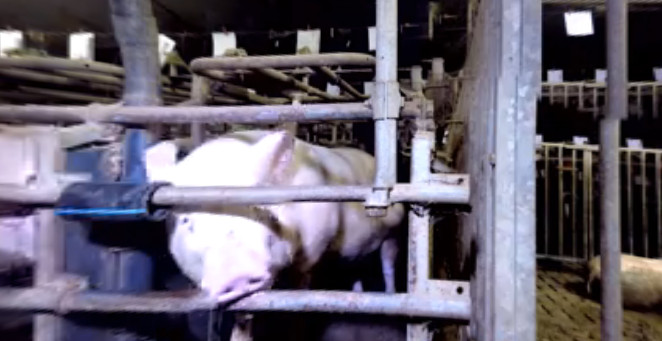 They are continually impregnated and when they give birth, they are moved to furrowing crates and their piglets come to feed. Sadly, many piglets are accidentally crushed by their mothers who are so limited in their movement, they cannot even shift their weight to save their babies. These piglets will never see the light of day and many die prematurely of infection.

The view of the chicken farm is equally unsettling. Broiler chickens, or chickens used for meat, are raised by the thousand in dim, enclosed sheds. These chickens live on top of their filth and levels of ammonia can become so high that it singes the chicken’s feathers.

These birds never get to see the light of day and will be fed until they become so obese they cannot hold up their own weight with their legs. Overcrowding and filth make salmonella and E.coli run rampant and the majority of chickens raised in factory farms are infected with one of the two (if not both).

To learn more about the Factory Farm 360 experience, check out the full trailer below. To tour a factory farm yourself, click here. We will warn you that some of the images might be a little gruesome.