By Jaya Bhumitra, Mercy for Animals 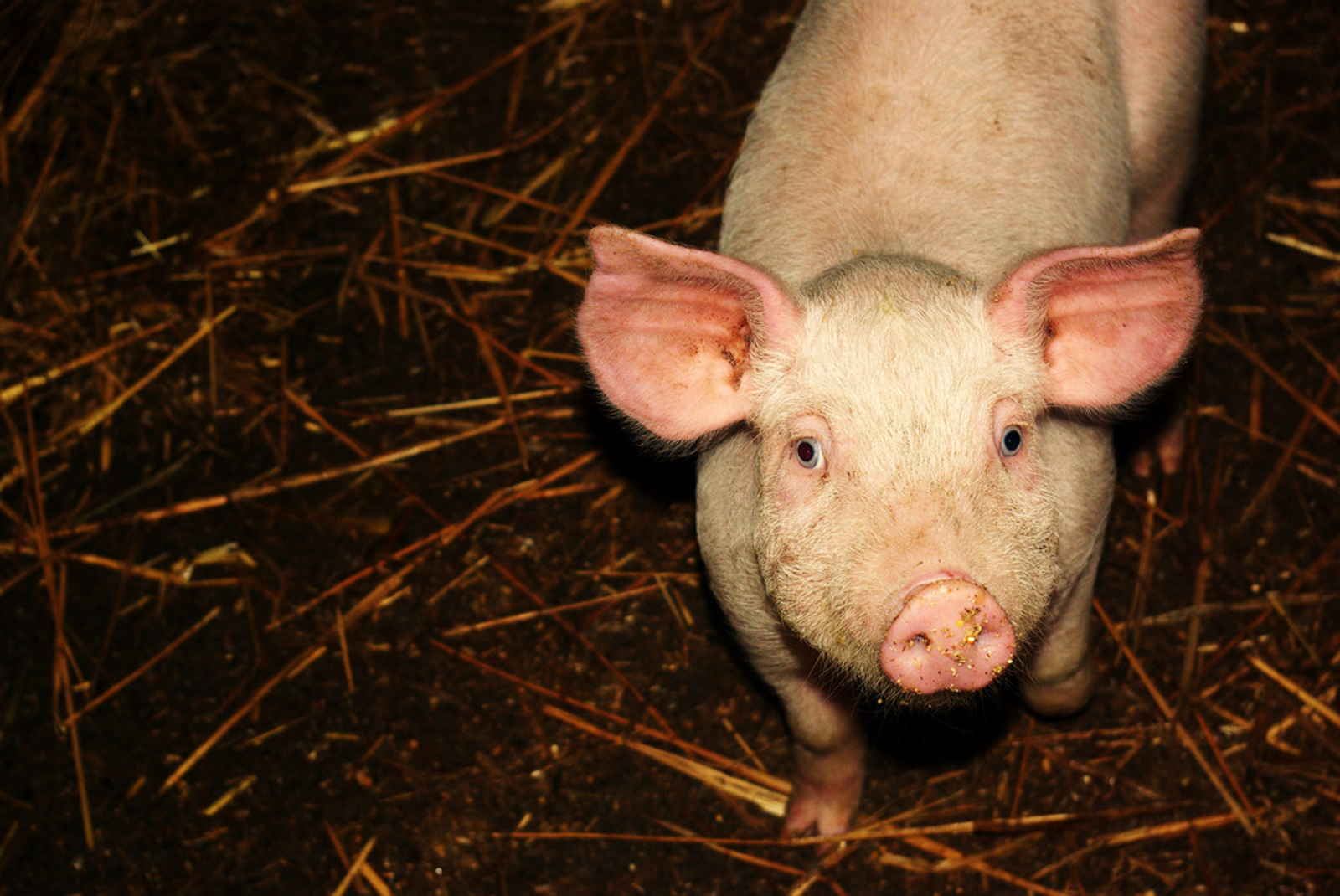 Many of the cruelties inherent in factory farming stem from the sheer number of animals packed onto each farm. Pigs and cows are confined by the thousands — and birds by the hundreds of thousands. Overcrowded conditions heighten animals’ stress, lower their immunity, and allow diseases to spread like wildfire as the recent avian flu epidemic illustrates. Antibiotics routinely administered to animals through their feed and water do little to prevent illnesses; in fact, we now know this practice breeds deadly superbugs that threaten both animal and human health.

Animals on factory farms live nearly their entire lives without ever feeling the sun on their backs or the grass beneath their feet. Instead, they spend months on end crammed inside barren, often windowless sheds, standing in their own feces and urine and breathing in toxic, choking fumes from accumulated waste. The least fortunate animals — egg-laying hens, mother pigs, and baby cows — spend most or all of their days inside cages so small they can barely move.

The Harsh Reality of Life for Factory Farmed Animals

On egg farms, each inhumane battery cage houses several hens, providing each bird with no more space than the face of an iPad. The chickens are unable to engage in many basic, natural behaviors, such as spreading their wings or walking without climbing over other birds. They dare not move much anyway, as the sharp cage wires cut into their feet and entangle their wings, and many birds become entirely immobilized and starve to death.

Breeding sows on factory farms are condemned to spending nearly all of their lives in cruel gestation crates—two-by-seven-foot metal cages barely larger than the pigs’ own bodies that prevent the animals from ever walking, turning around, or even lying down comfortably. Pigs, which studies cite as smarter than and as social as dogs, endure great injury to both their bodies and minds inside these tiny stalls. Many suffer from untreated open wounds, pressure sores, and abscesses. Repression leads to depression, and bored and anxious pigs gnaw on or bang their heads against the bars binding them in place in displays of psychological distress.

Unwanted male calves of the dairy industry are similarly imprisoned in hellish conditions for the entirety of their short lives. Not only are the calves confined to restrictive veal crates, they are also tethered by the neck to further inhibit their movement. Many calves cannot fully lift their heads due to the short leash.

How Factory Farms Respond to Poor Conditions for Animals

Extreme confinement and overcrowding on factory farms promote aggressive behavior not seen in natural settings. However, instead of providing animals with more room and enrichment, factory farmers mutilate the animals’ bodies to prevent them from attacking one another — not, of course, for the animals’ sake, but because injuries from fighting can cut into profits.

For instance, agitated pigs may bite each other’s tails, causing infection, and in severe cases, leading to cannibalism. How do farmers deal with this risk? By replacing one harm with another: without any anesthesia and just days after the piglets are born, their tails are hacked off and their teeth clipped with pliers. Likewise, chickens’ sensitive beaks are seared off without painkillers to prevent the animals from pecking each other to death. Farmers call that “debeaking”— we call it torture.

While the public would condemn the castration of a dog without anesthesia, workers on factory farms rip out piglets’ testicles without pain relief. Why? To remove “boar taint,” an unpleasant taste in meat from unaltered male pigs. Dairy cows fare no better — in an archaic practice deemed unnecessary by the dairy industry itself, workers slice off cows’ nerve-rich tails, often with unsterilized instruments as rudimentary as pruning shears. Farmers also burn off cows’ horns with hot irons — but without painkillers. Money before mercy; that’s the industry mantra.

Shockingly, these excruciating procedures are considered standard practice on factory farms, but malicious animal abuse is just as pervasive. Workers who might otherwise have an affinity for animals experience their own psychological damage from the inhospitable environments in which they are required to work and the constant suffering they are asked to inflict on other beings. As a coping mechanism, workers become desensitized to the misery of the animals, and the inevitable result is the everyday brutality documented by nearly every undercover video recorded on a factory farm. Time and time again, workers have been caught beating, punching, and kicking animals; breaking their tails, stabbing them with pitchforks, and raising them with forklifts to force them to stand; and hurling them into the air or the ground, among other abuses.

Following the release of undercover investigations exposing sickening animal abuse at factory farms, companies are quick to remove what they call “bad actors” from their supply chains.

But firing a few workers and launching an internal audit after the fact does nothing to curb the largest problem, which is systemic: standard practices too cruel to stomach and a lack of oversight to detect and deter malicious animal abuse.

Fortunately, many of the biggest players in the food industry have recognized the public’s rapidly growing concern for farmed animal welfare and transparency in food production. Just a month ago, Walmart — the world’s largest company and America’s largest grocer — announced a sweeping animal welfare policy that will reduce the suffering of millions of birds, pigs, and cows in its supply chain every year. Similarly, Nestlé, the largest food company in the world; Starbucks, one of the best-known brands in the world; and Aramark, the largest food service company in the U.S., recently adopted comprehensive animal welfare policies.

Equally encouraging, Compass Group and Sodexo, also among the largest food service companies in the U.S., this year expanded their cage-free egg commitments, and Great Lakes Cheese, Leprino Foods, and Saputo, three of the largest dairy companies in the world, just enacted animal welfare requirements for their suppliers.

These important policy changes, many of which were prompted by Mercy For Animals investigations and campaigns, signal a new era in corporate responsibility — not just for these particular companies, but the food industry as a whole.

It’s never been clearer that the days are numbered for factory farms that intensively confine, painfully mutilate, and otherwise injure animals for profit. After all, animals are not commodities and at the end of the day the question of their conditions — or their use at all — is not a financial one but a moral one.

Even if factory farming were eventually abolished the most tragically unnecessary practice to which we subject farmed animals is the one that ends their lives: slaughter.

Thankfully, the dirty business of raising and killing animals for food is one we don’t have to support. At least three times a day, we have an opportunity to choose compassionate plant-based foods that spare farmed animals a lifetime of suffering. Start at your next meal: check out One Green Planet’s database of 5,000+ plant-based recipes to start or visit ChooseVeg.com for free recipes, inspiring tips, and more.