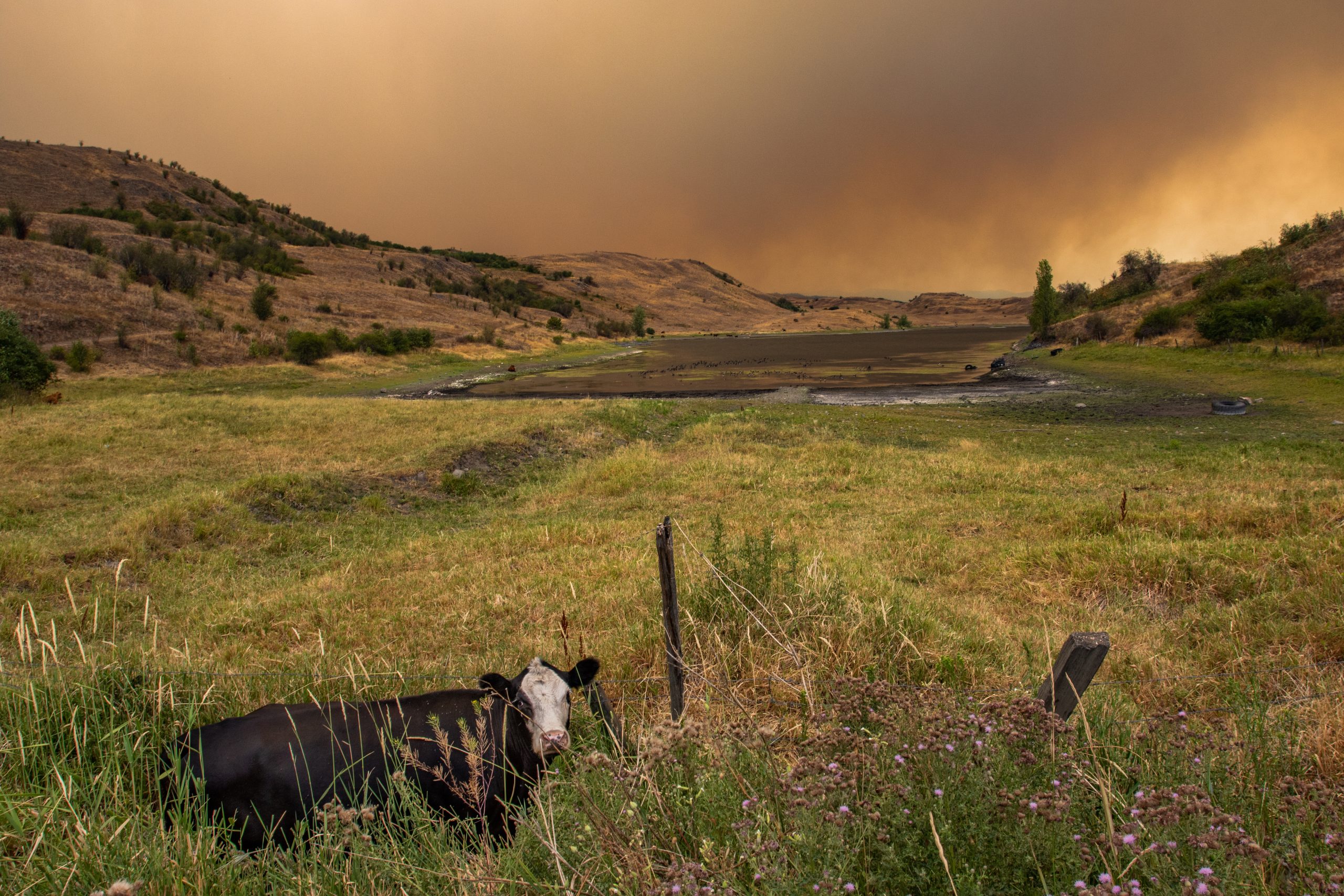 Wildfires have put animals in serious danger, leaving them in burned and smoke-filled environments without a way to get out. We Animals Media has photographed and rescued countless animals who were, due to human-caused climate disasters, unable to save themselves. 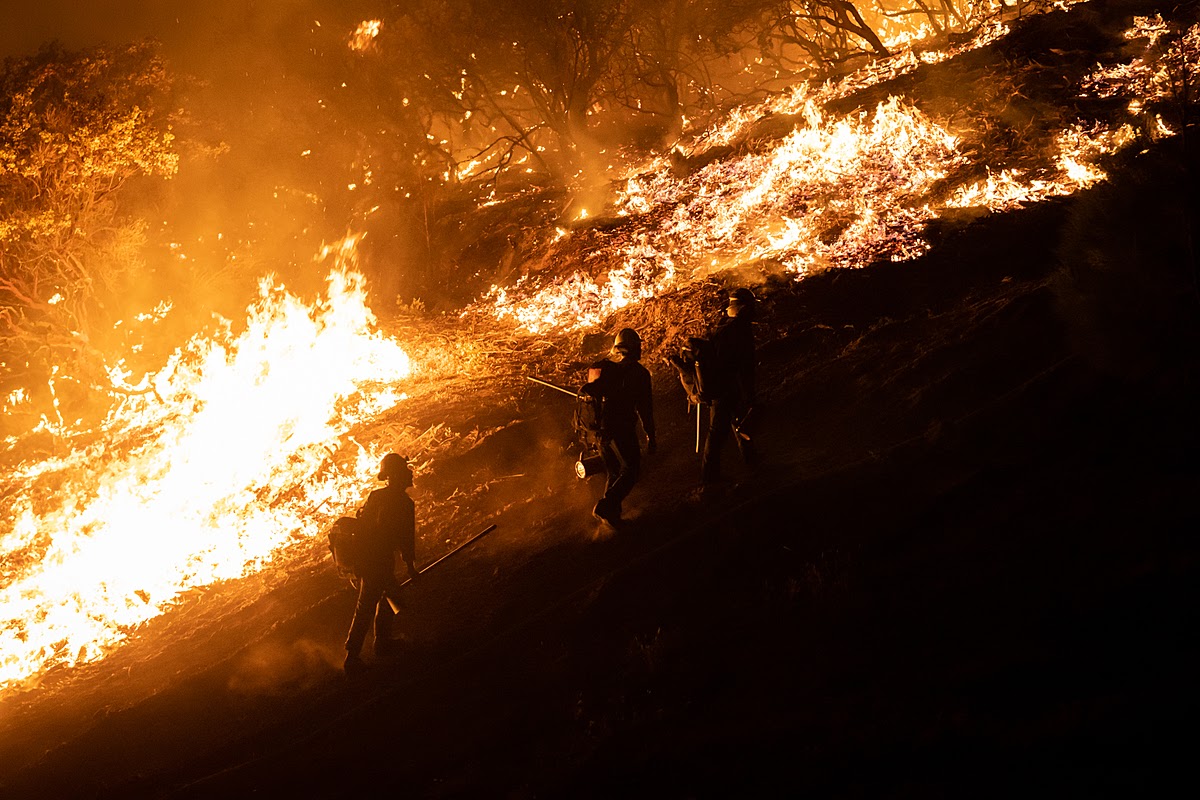 It’s easy to think of climate change as abstract when you’re not seeing the effects of it firsthand. However, when put in the middle of wildfires in British Columbia or Australia, watching animals get slaughtered due to drought, and seeing pigs get washed away in a hurricane in North Carolina, things become very real. Kelly Guerin, the photojournalist capturing the historically devastating scenes, felt how real the consequences of a changing earth were. “For this brief window of time climate change was no longer a line graph or a warning for future generations, it was a massive hurricane decimating neighbourhoods and drowning animals by the millions.” 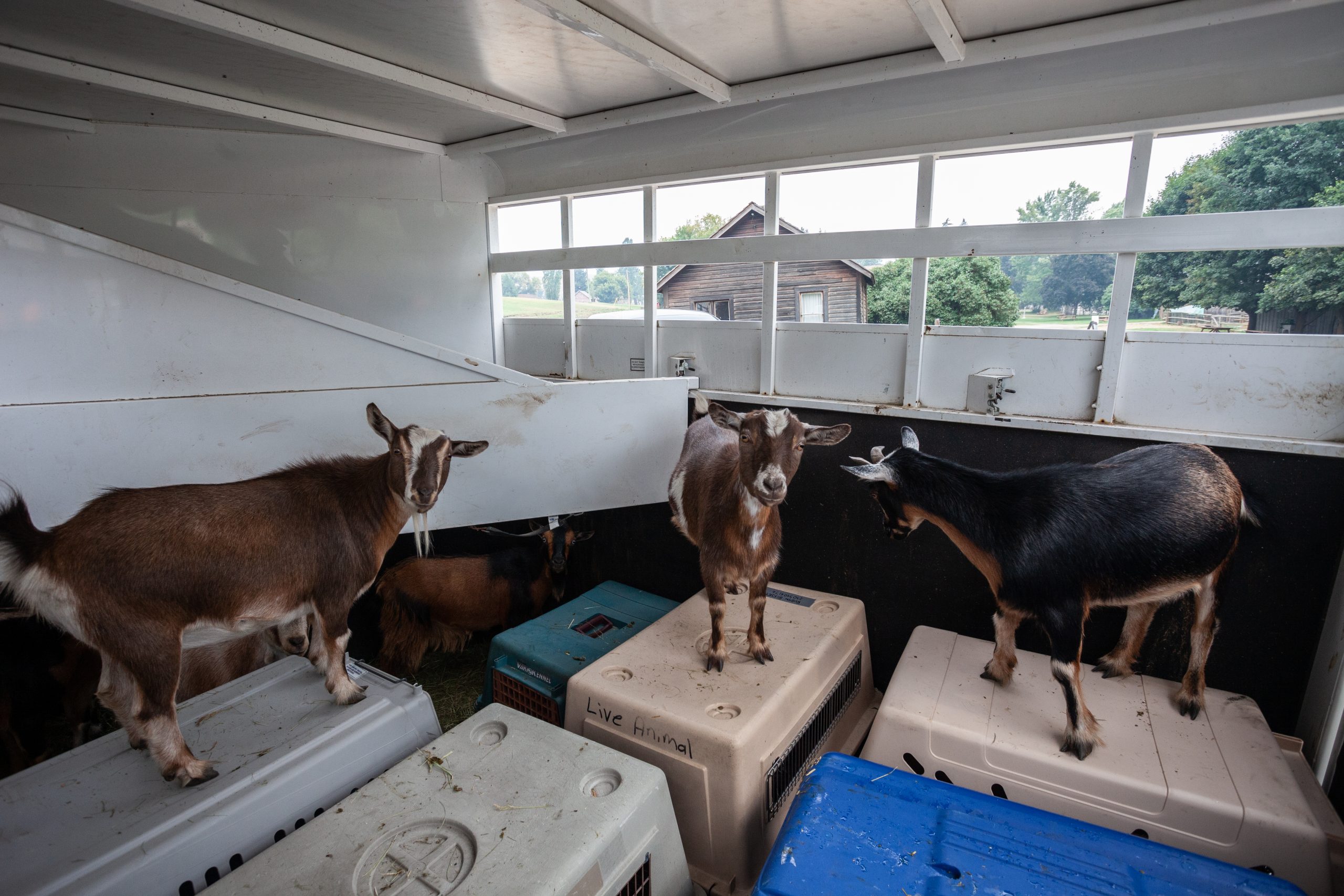 There aren’t evacuation routes planned to help farmers get the animals into trailers so they can be driven to a safe location. To make matters worse, the animals have usually not been trained to be loaded into trailers, making the entire experience that much more challenging. 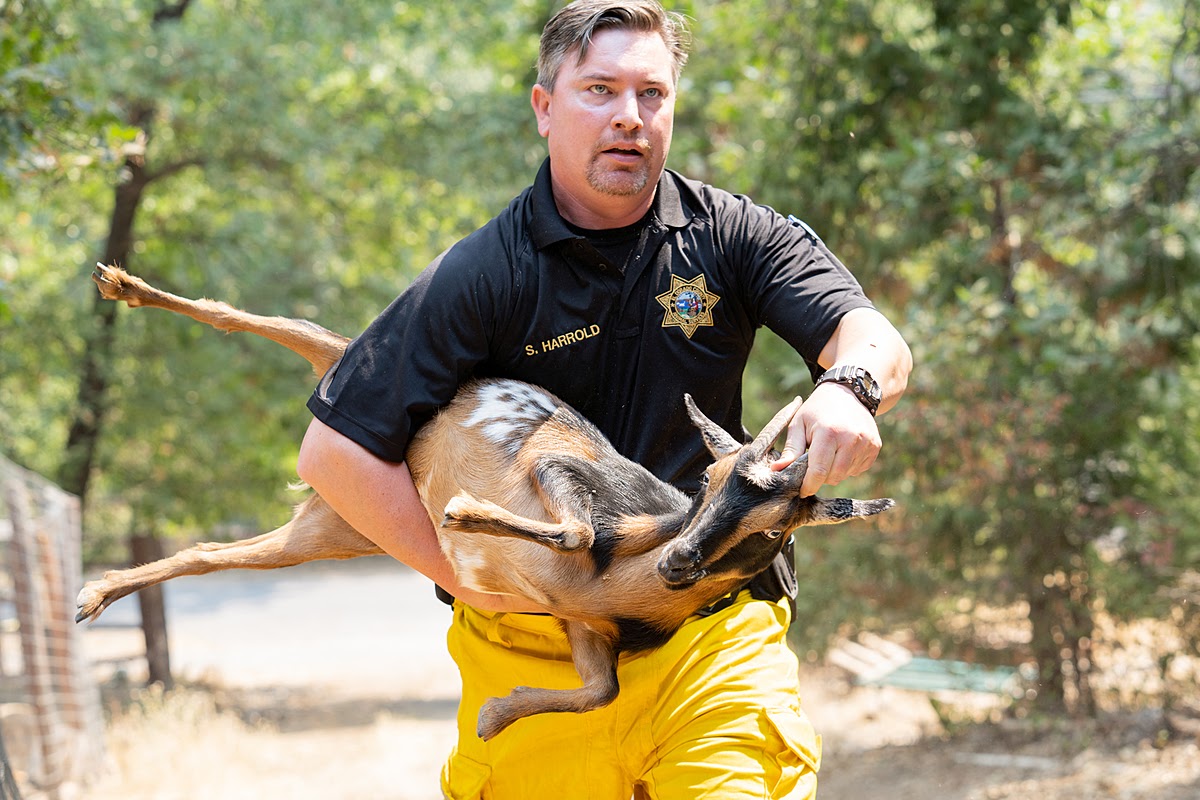 A team of seven animal rescuers worked non-stop to get animals out of the active fire zone during the Caldor fire in the Sierra Mountain range in Lake Tahoe, California on August 14th. Nikki Ritcher, a photographer for We Animals Media, was able to photograph the rescuers at work as they carried animals of all sizes into safety. They managed to save about 600 farm animals. 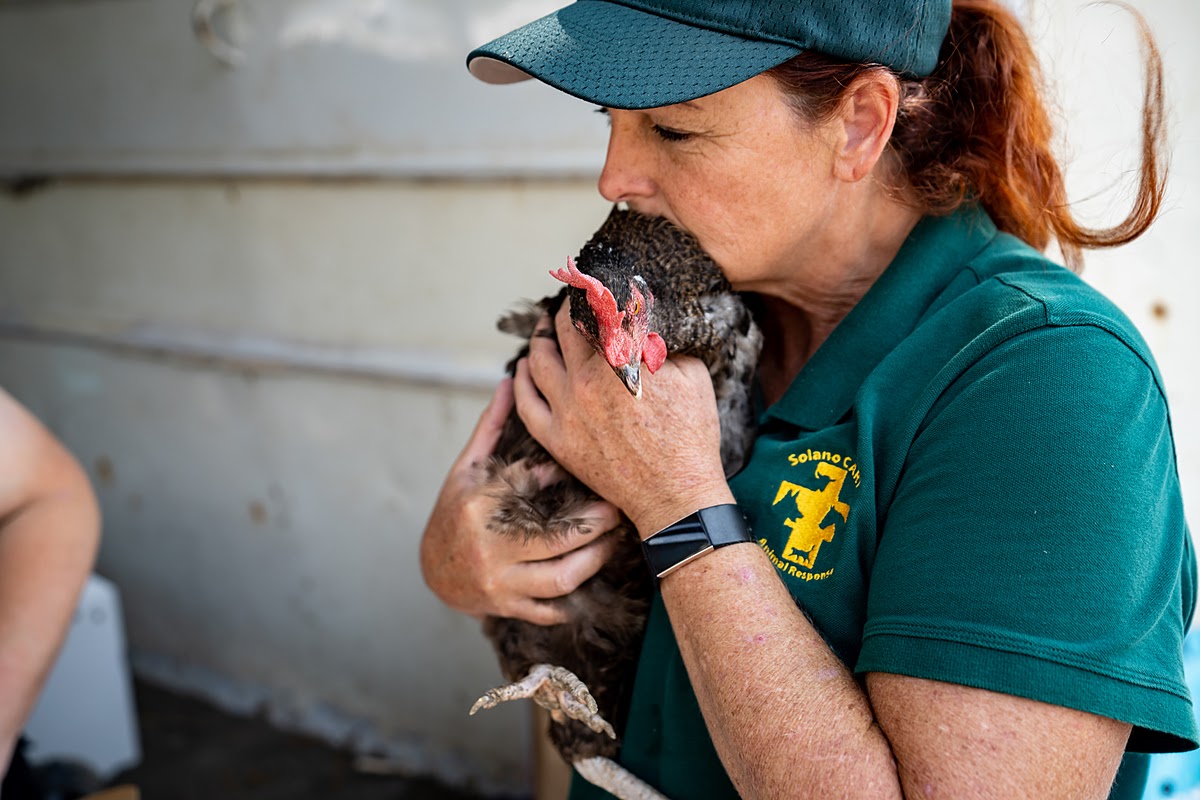 The fear and urgency in We Animal Media’s pictures are palpable. One worker was working his seventh day with no more than 2 hours of sleep a night. To deny climate change, to deny the misery being inflicted on humans and animals alike, is to continue to feed the wildfires, floods, and other disasters that are becoming far too common and destructive. 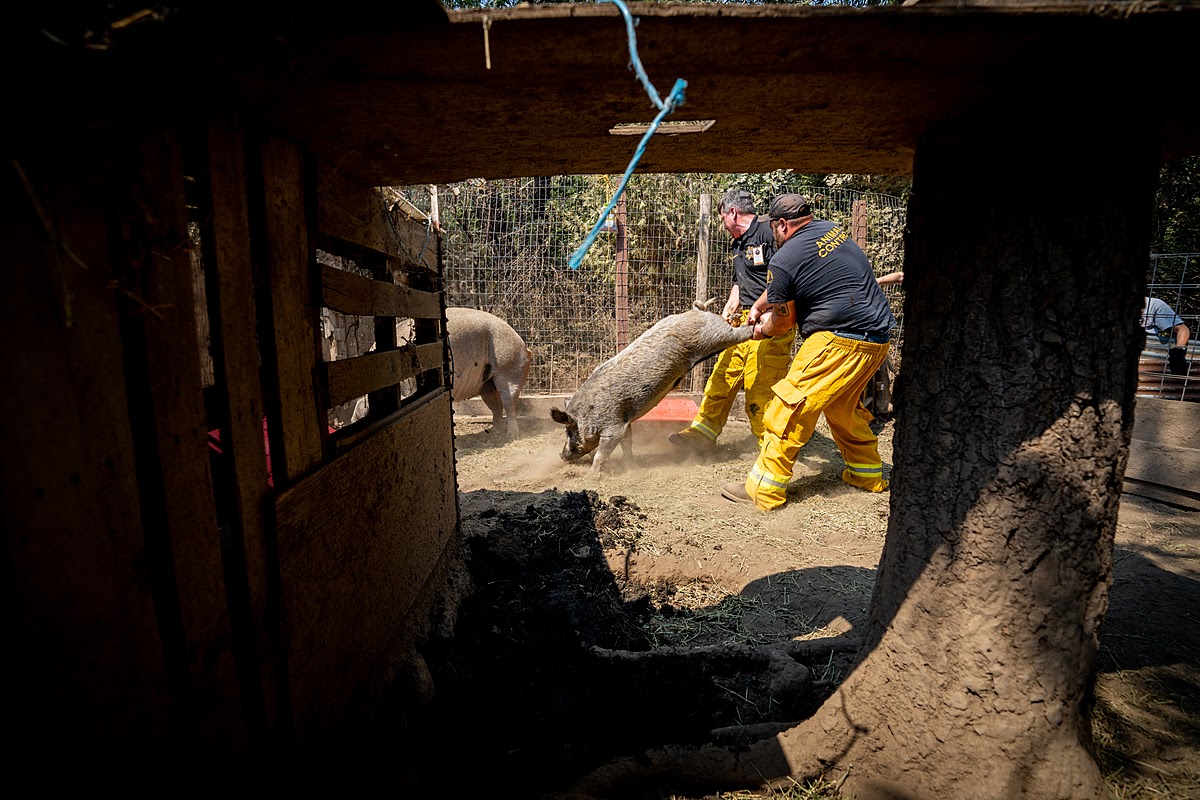 In early August, in British Columbia, We Animals Media was able to document a few of the 280 wildfires that took Canada by storm. These flames were sparked by unnaturally high and record-breaking heatwaves. Over 3,500 properties in the area were evacuated, and even as temperatures begin to lower, they are still being ordered to stay away from the area. The wildfires have burned 1.6 million acres. That’s twice the past decade’s wildfire average. Hundreds of animals have been evacuated and the BC Wildfire Services have responded to 1,427 wildfires since April 1st.

The UN Report & We Animals Media 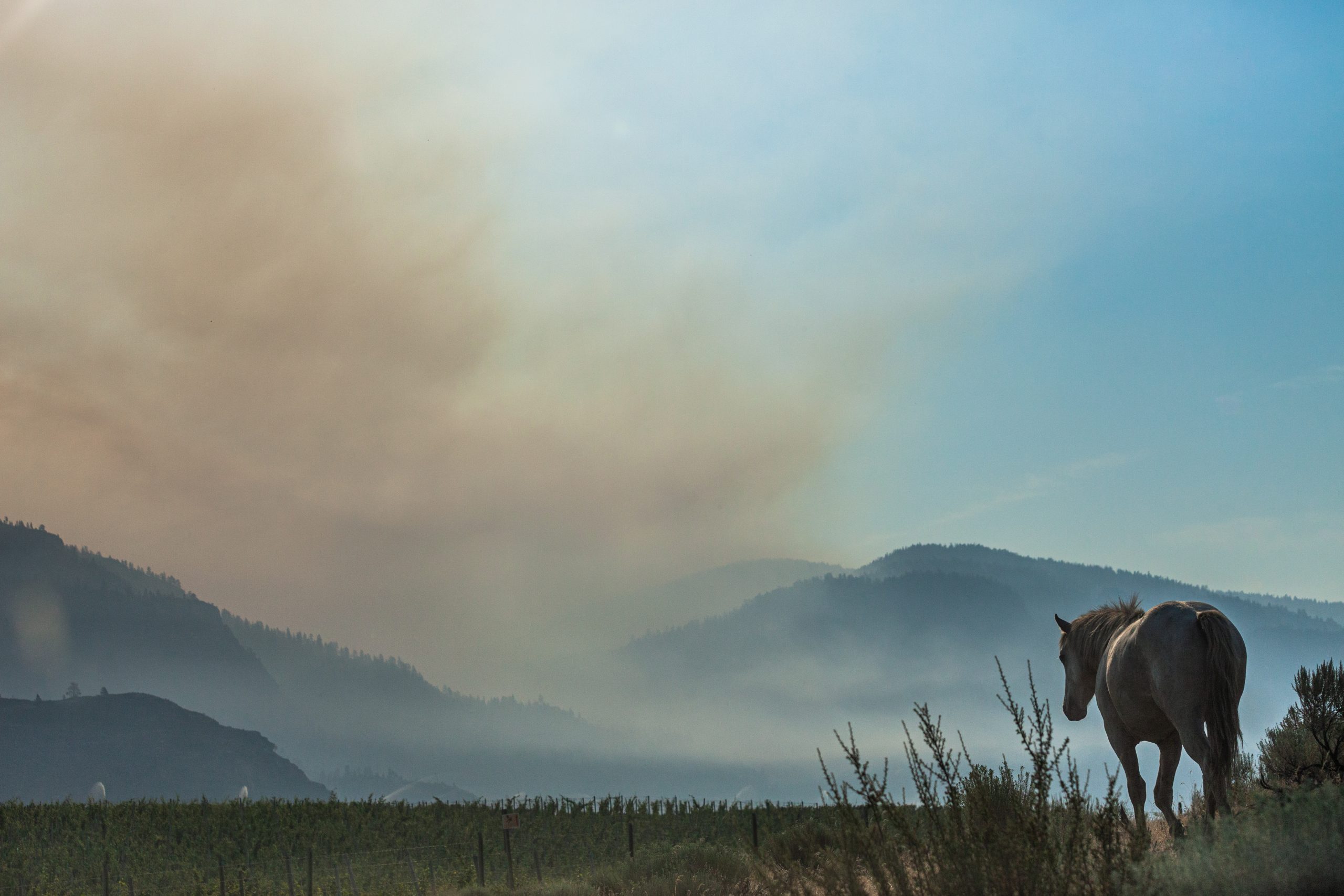 The UN has given the earth and its human population a few years to fix things, to stop the world from crumbling in on itself and taking everything with it. Things have never been this urgent. Animal agriculture pumps methane, nitrous oxide, and carbon dioxide into the air, promotes feed inefficiencies and deforestation and uses an unjustifiable amount of land and water.

We Animals Media’s work highlights how animal suffering continues to promote environmental destruction. It’s difficult to ignore the irony that animal agriculture-caused disasters are taking out the very industries that caused them in the first place. Unfortunately, the most innocent and mistreated creatures in the industry are being punished to the furthest extent.