These 5 Adorable Rescued Pigs Need Your Help to Save More Piggies in Need! 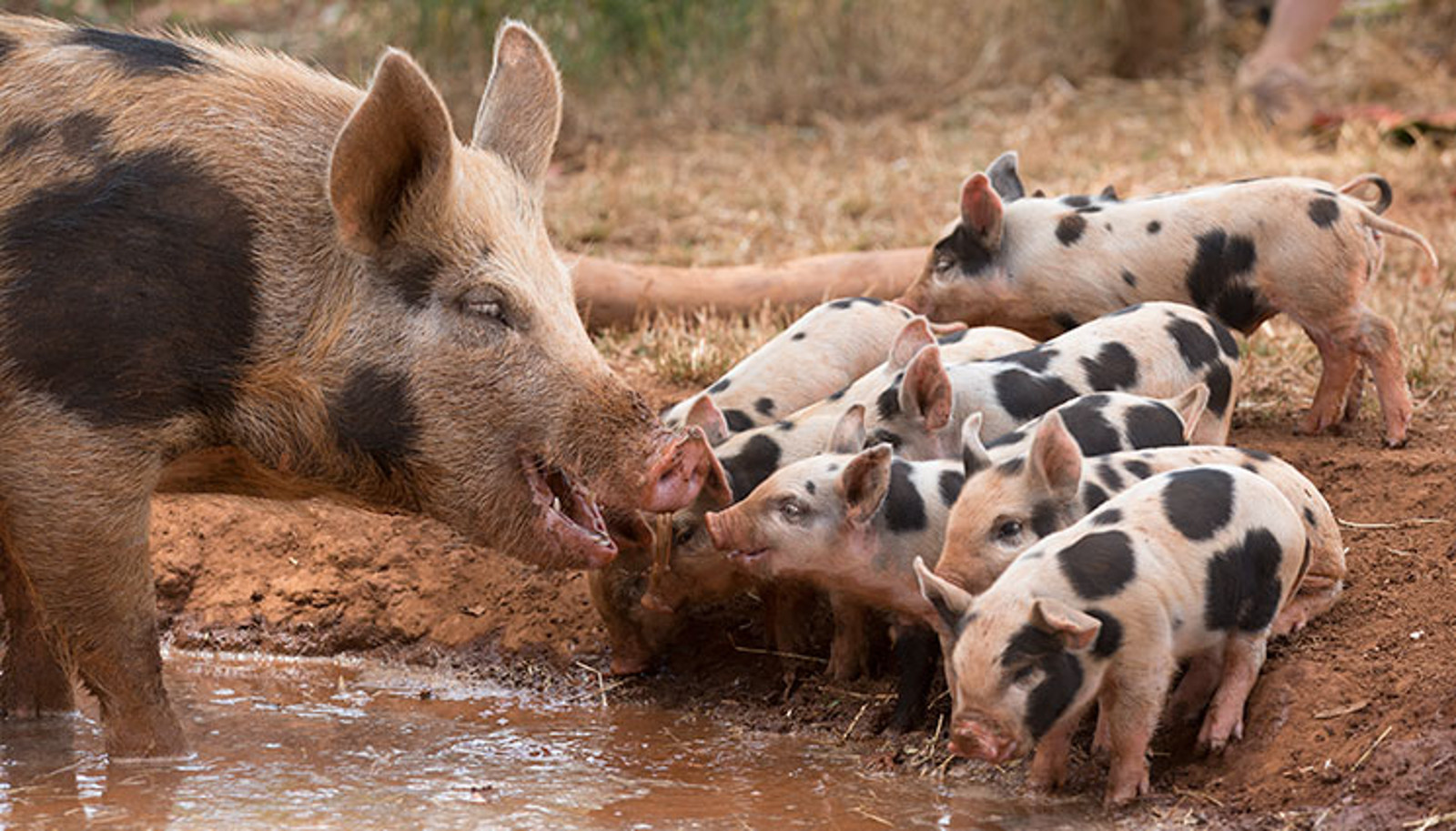 Many people do not realize just how intelligent and dynamic pigs truly are. Although these creatures can learn tricks as well as any dog and have amazing personalities, most never think of them as anything more than “food” animals. As a result, billions of pigs are sentenced to unimaginable suffering every year in the animal agriculture industry and are never given the chance to live life in their own right.

Treated like commodities, pigs are crammed into extremely overcrowded and filthy conditions on factory farms, subjected to ear cutting, tail “docking,” teeth trimming and castration, all without anesthetic. Sows are regarded as piglet breeding machines, confined to stalls so small that they will never get the chance to turn around for their entire lives. And piglets as young as three-weeks-old are separated from their mothers and sent to live in feeding warehouses where they are fattened up to be sent to slaughter by the time they reach six months of age. All for the sake of meeting our never-ending demand for pork, bacon and ham.

Thankfully, there are many kind people who see pigs as much more than just “food” or “commodities,” they see them as individuals worthy of a life free from harm. The people behind Australia’s Edgar’s Mission Farm Sanctuary, certainly fall into this category.

Operating under the motto, “If we could live happy and healthy lives without harming other… why wouldn’t we?” Edgar’s Mission provides a safe haven for the farmed animals that so many others overlook. While Edgar’s cares for a variety of farmed animals, pigs hold a special place in founder Pam Ahern’s heart as the idea for the sanctuary was inspired by a little piggy named Edgar.

Since the sanctuary was founded, Edgar’s has taken in many pigs and now they are on a mission to create an even better enclosure for their special porcine residents. Launching project “Piggy Paradise,” Edgar’s hopes to replace their old pig facilities with a new, state of the art barn.

In honor of this amazing new undertaking, let’s meet some of the sanctuaries current residents to learn a little bit more about how Edgar’s has changed their lives!

Leon was born on April 21, 2014 on a free range farm in Australia and shortly thereafter sustained serious injuries when his mother accidentally fell on him. Knowing that this poor injured piglet would never be given the care he needed on this farm, a kind person stepped in to adopt Leon. While this was an incredibly compassionate action, they ended up surrendering him to Edgar’s Mission once they realized he needed more help than they could give.

Edgar’s promptly took Leon to the vet and learned that he had suffered a broken hind leg and an injured hock ligament. It was clear that Leon would need a wheelchair to help him get around while his young bones set, but due to his size there was none available. So, unwilling to give up on the piglet, Edgar’s crafted a cart especially for him.


Leon is now free from his wheels and has grown into a strong, resilient teenage piggy. His story truly shows how far a little compassion can go!

Lily arrived at the sanctuary on June 11, 2005, already a star due to her role as one of the 46 piglets to play Wilbur in Charlotte’s Web. Many people do not know that pigs are extremely intelligent animals that can learn to tricks and solve puzzles, so being trained to play a pig was likely a cinch for Lily. Due to her extraordinary ability to learn and follow direction, Lily was the favorite of the film’s pig trainer. We’re sure it doesn’t hurt that her brains also come with a lot of cuteness, a love of belly rubs and a healthy dose of mischief.

Since coming to Edgar’s, Lily has made herself right at home and is always looking for new ways to pass the time. Some of her favorite activities include stealing volunteer’s cleaning bags, rooting and napping in her soft straw bed. Despite her former life in show-biz, Lily has managed to remain a down-to-earth, good humored little piggy. (Although there is no doubt that she remains a star in her caretaker’s eyes.) 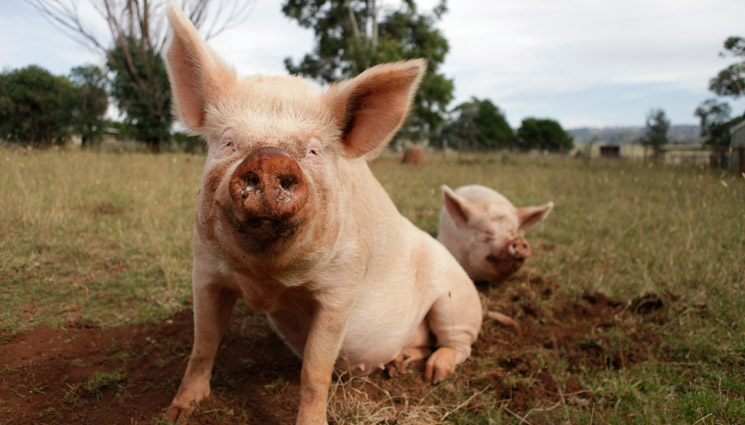 Unlike many of the other piggies at the sanctuary, Penelope-Sue was not born into a cruel or abusive environment, rather she is the daughter of one of Edgar’s older residents, Piggy Sue. Born in March of 2015, Penelope is the runt of nine piglets, which means she needs a little more attention than the others, but her squeals of happiness are more than enough thanks to make it worth every extra bottle and belly rub for the Edgar’s team.

Even though she is only a few weeks old, cleanliness is already the top priority for Penelope-Sue as she demands to be taken outside to use the bathroom. How’s that for busting the “pigs are messy” myth!

Like Penelope-Sue, Hip-Hop Bob was born at Edgar’s Mission. On November 7, 2010, this little piggy was welcomed into the world along with a big litter of piglets who would never have to know the horrors of life in factory farm. Shortly after Hip-Hop’s mother gave birth, her best friend, Emma, gave birth to a litter of her own. Totaling in at 16 piglets, Edgar’s sure had their hands full, but it was a challenge they were more than willing to take on.

Hip-Hop and his crew are surely the cutest group of trouble makers imaginable and can always be seen roaming the farm together. Their most notable adventure included sneaking into the sanctuary’s feed room and making a rather messy snack time of it. Although their snack party was busted by volunteers, this incident made them pretty famous around sanctuary.

Since his youthful days of mischief, Hip-Hop Bob has reformed (for the most part!) and now serves as an ambassador for farmed animals. He traveled on the Edgar’s Mission Kindness Tour around Victoria and showed everyone how amazing pigs are and why they deserve to be thought of as individuals, not “bacon.” 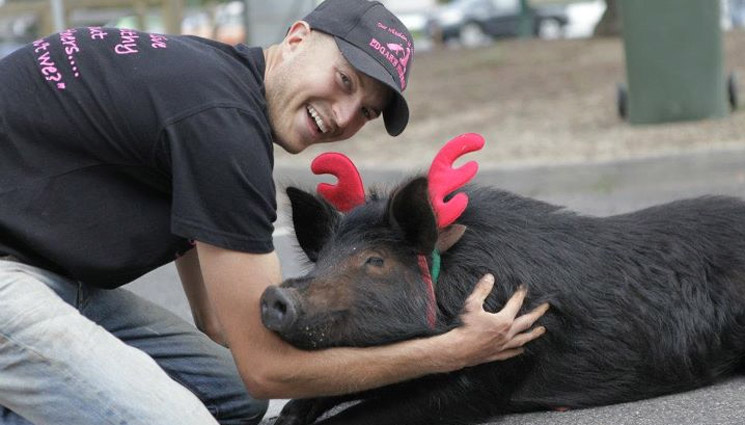 Wonder Woman, AKA Mama Pig, was rescued with two other pigs who had managed to escape from the farm that was raising them for meat. From the very beginning, it was clear that this was a brave and resilient pig who was determined to get the very best out of life, which she did when she came to live at Edgar’s!

After arriving at the sanctuary, it was discovered that she was pregnant. A few months later, it was time for this courageous mother to give birth. Though she was weary of humans at first, likely due to her harrowing past, she let the staff help her through the birth process, and welcomed eight happy piglets into life at Edgar’s on December 6, 2013.

Her story certainly illustrates the ability of one compassionate act to multiply into many others – eight to be exact, in this case!

Help Edgar’s Save Even More Oinkers!

If the reality of factory farming reads like a horror novel, Edgar’s Mission’s plans for their piggy paradise sounds like a pig fairy tale with a happily-ever-after ending. Their goal is to raise $100,000 for a barn to protect the pigs as well as space for them to roam. This high tech, ultra high-end barn will even include a sensor activated piggy shower because, despite the rumors, pigs are very clean animals. The campaign is currently about 50 percent funded, and you can still donate to receive great perks like the Perfect Pigs coffee table book, snout art and more.

With your help, not only can Edgar’s give these five amazing piggies a new, wonderful home, but they can also save the lives of many more pigs to come. Now that’s something we can all oink about!