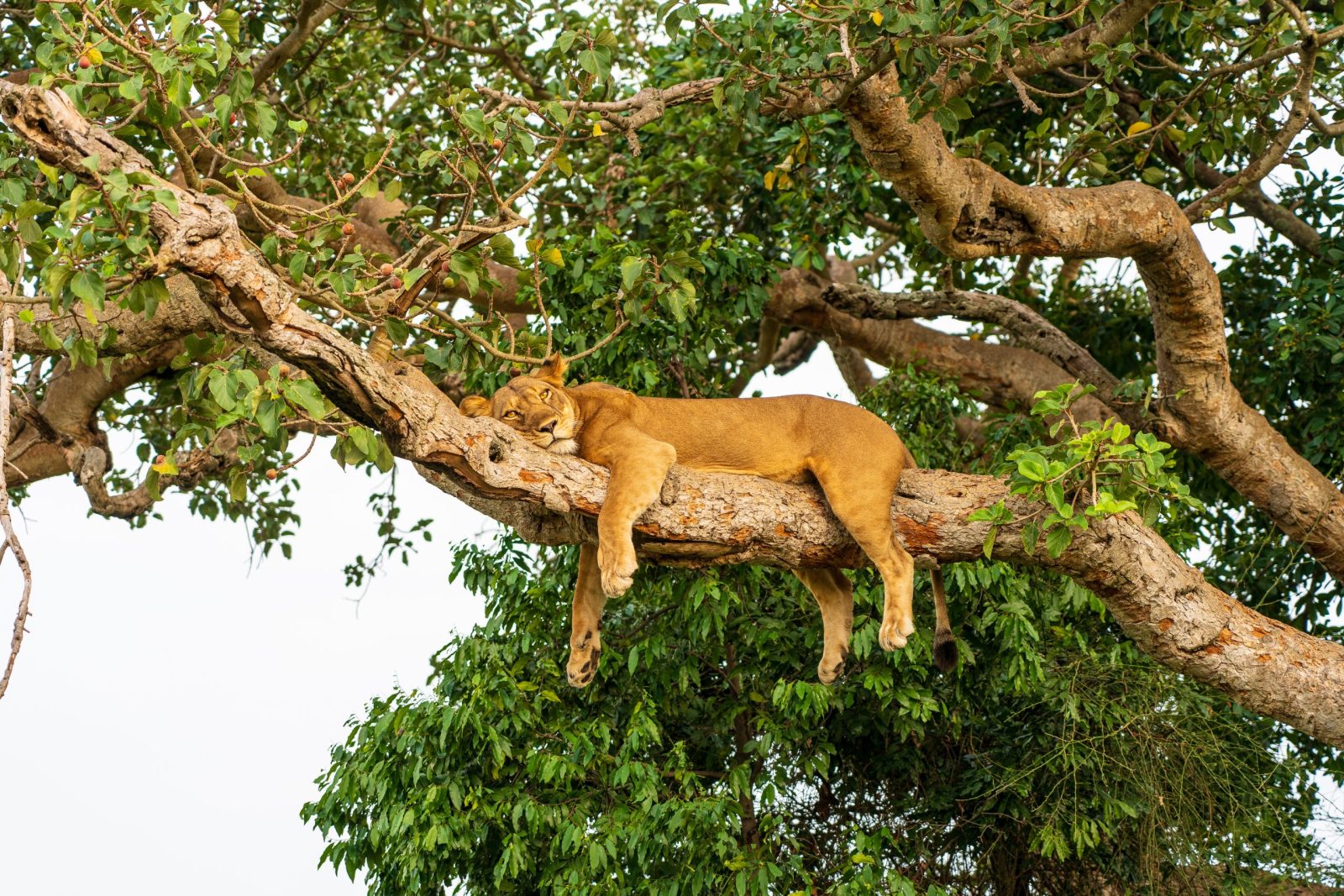 If you visit a select few national parks around the world, you’ll see lions doing something you probably didn’t know they could do: climb trees. In parks like Queen Elizabeth National Park in Uganda or Lake Manyara National Park in Tanzania, you’ll see prides of lions spending a large portion of their days above ground on tree branches. You won’t see lions up in the branches in most other places, so why are some hanging around in trees over there?

Other large predatory cats, like leopards, are known to climb trees. Leopards are light, slim, and built to climb trees. A study found that leopards would lose one-third of their kill to hyenas if they weren’t able to bring their meals up into the trees with them. Lions, however, are much heavier, are very social, and usually live in large prides.

Luke Hunter, executive director of the big cats’ program of the Wildlife Conservation Society in New York City, said, “Lions, on the other hand, are built with enormously powerful forequarters, and a very, very stiff back. That’s for wrestling heavyweight prey, such as a buffalo, to the ground.”

Climbing a tree can be dangerous for a lion because they are so heavy. It can be easy to break a bone when coming down from the tree if all of their weight landed in one spot. Lions also don’t have any need to climb trees. Most lions live in populated prides and can protect each other from predators. On the other hand, leopards live alone most of the time, so it makes sense they have evolved with agility and speed to vertically ascend a tree to get away from predators.

People have pondered for a long time why lions in some areas climb trees, and others don’t, mainly because they are not built to climb. Many speculate that it is due to learned behaviors and unique location conditions.

Moreangels Mbizah, a conservation biologist, working with lions in the Kavango-Zambezi Transfrontier Conservation Area, says there have been very few records of lions climbing trees in the park in Zimbabwe.

“The only reason they would want to climb is if there is something on the ground that they’re avoiding,” she said.

George B. Schaller, a German-American biologist, wrote the book “The Serengeti Lion” based on a three-year study of lion behavior in the Serengeti National Park. He found that after a period of rainfall in 1963, a plague of Stomoxys biting flies pushed a pride of lions up trees and even down warthog burrows. The lions were going anywhere to get away from these flies, and Schaller believes this event might be the lion’s precursor to the learned habit of climbing trees.

Scientists speculate that lions may also climb trees to escape the heat, survey the landscape, and look for prey. However, there may be other reasons for prides in Queen Elizabeth National Park in Uganda.

Prides in this park tend to live in smaller packs than other prides throughout the rest of the world. They also share the park with large herds of buffaloes and elephants. When there is a giant stampede of buffaloes, lions can escape up the branches of a tree to safety.

Stampede can be dangerous to lions, and they can sometimes get trampled and killed by a large herd of buffaloes. There have been records of lions getting run up trees by angry buffalo herds and sometimes being trapped up there for hours.

Dr. Hunter in Queen Elizabeth National Park said, “You get entire families — adults, youngsters, everyone — up trees. Generation after generation, it really has become a habit to go up in the trees. It just gets entrenched as a culture because it’s fun.”

Lions prefer to climb trees like the African sycamore dig tree or umbrella acacia thorn trees with lower horizontal branches. It is amazing to see these intelligent creatures evolve based on their environments and adapt to their surroundings. Sign this petition to tell Vietnam to stop the slaughter of innocent lions!