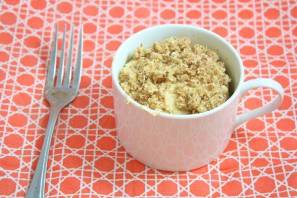 I just want to be straightforward here. This recipe rocks. It doesn’t get a lot better than this, folks. Coffee cake. In the microwave. Just for you. AND it tastes so great that it could put an overpriced coffee chain restaurant that happens to rhyme with Shmartucks to shame. Ever been tempted by that seemingly harmless loaf in the glass case? Congratulations, you’re human. Well that seemingly harmless loaf is actually really very bad for you. But let me turn that frown upside down! I come bearing a substitute that is at least 87x better than the Starbucks’s version. (Oops! I said the name. Sorry about that. I really ruined the surprise there.) This coffee cake is vegan, gluten free, grain free, low carb, sugar free, soy free, ready in less than 3 minutes, and only 130 calories for the whole spankin’ thing. Another bonus? (Yes, another one.) This can be enjoyed for breakfast alongside some cocomeal in your pajamas and fuzzy slippers. Can you do that at Starbucks? Not without some pretty speculating (but secretly jealous) stares you can’t. But hey, if you don’t just want to eat this in the morning, it’s your call. If you want to make this at eleven o’clock at night while watching endlessly enjoyable reruns of House Hunters, no one is judging. I mean, if I had to judge you in that scenario, I would judge you as being really smart and having a lot of common sense. Duh. You think so, too? I am so glad to hear you have your priorities straight. I’m proud of you.

For the crumb topping For the cake