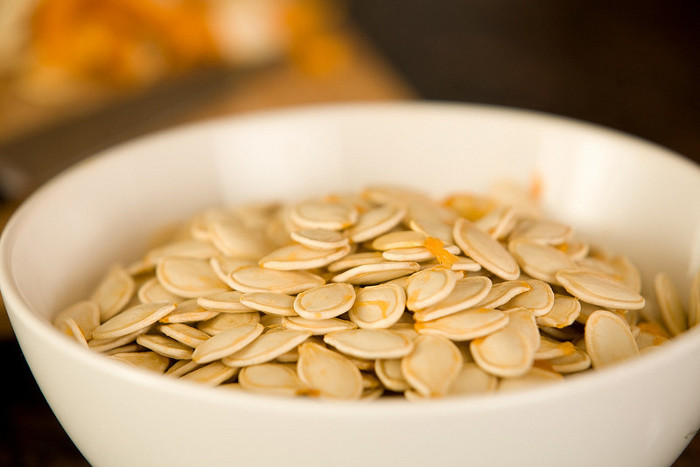 Pumpkin-flavored anything always seems to bring a sense of comfort: a pumpkin latte on a crisp fall day; pumpkin bread with coffee in the morning; pumpkin pie on Thanksgiving. And we can’t forget about the plant itself on Halloween.

Going straight to the source of these autumn treats brings you to the pumpkin seed. Considered one of the healthiest foods in the world, pumpkin seeds not only taste delicious, but just one small serving is packed with tons of health benefits.

According to the University of Arizona Cooperative Extension of Yavapai County, historians suspect that the pumpkin originated in Central America, as seeds from similar plants dating back over 7,000 years ago have been found in Mexico. Native Americans called pumpkins “isquotm squash” and used their seeds for medicine and food (they flattened strips of pumpkin and dried them to make meats). Early settlers also ate it and their method of adding milk, honey and spices into a hollowed pumpkin shell and then baking it is thought to be the origin of pumpkin pie.

Pumpkin seeds are one of those foods that can be consumed in many different ways. They can be toasted and eaten on their own, and they’re great to incorporate into recipes for their strong, sweet taste. But no matter how you eat them, you’ll be infusing your body with a tremendous amount of nutrients.

Add a Taste of Fall to your Recipes

When cooking or baking with pumpkin seeds, recipes usually call for them to be roasted–spreading them out on a baking sheet and putting them in the oven at 160-170 degrees for 15-20 minutes suffices. It’s important to note though that these seeds should not be roasted for longer than 20 minutes, as doing so for any longer can change their fat structure.

The following delicious recipes from our Green Monsters use pumpkin seeds for crunch, texture and garnish. And although pumpkins are considered to be a seasonal food, these dishes and desserts can be enjoyed any time of the year!