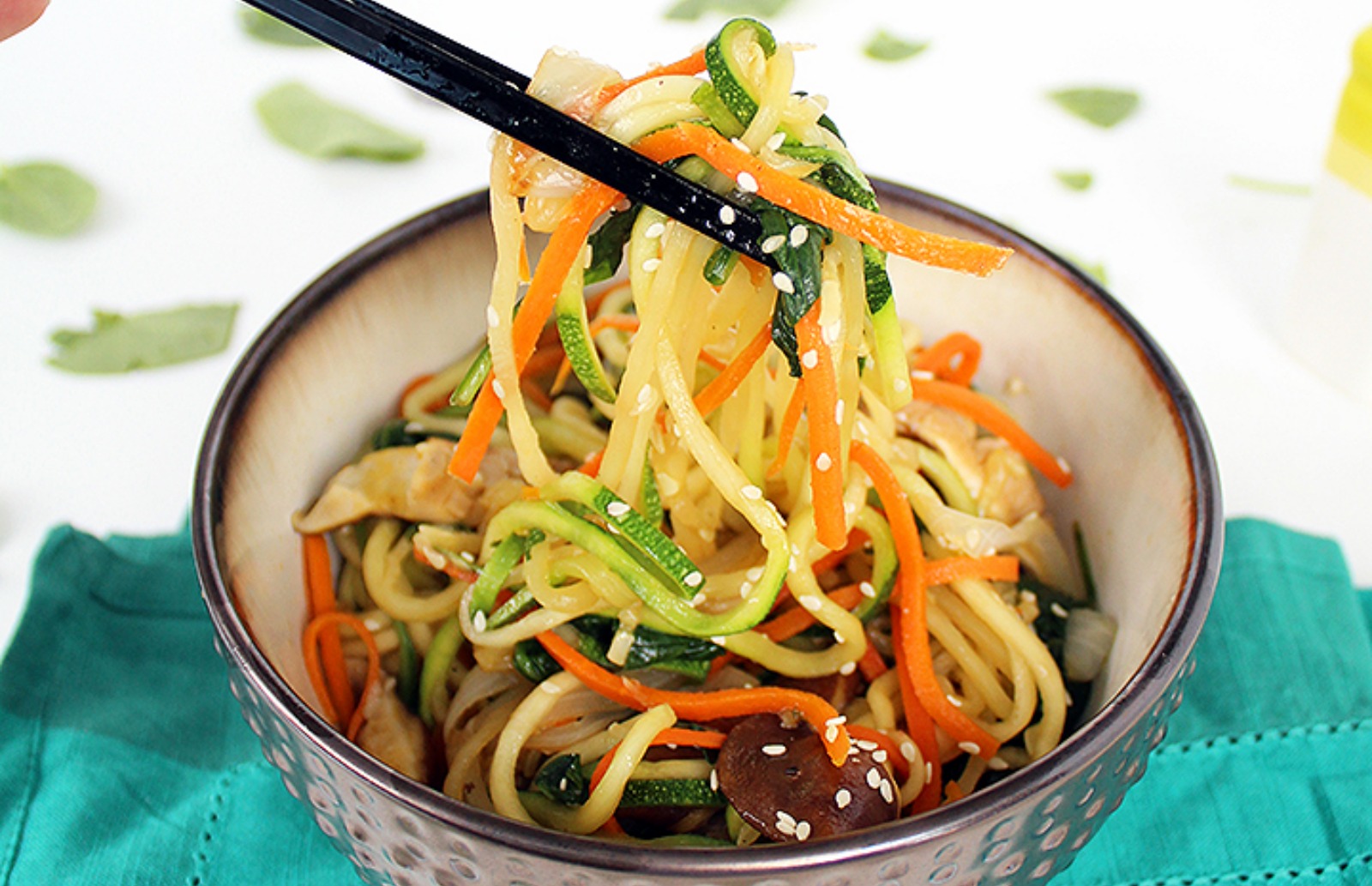 If you’re looking to eat more fruits and veggies, or trying to eat gluten-free, getting away from grains can be tricky. While glutenous pasta can easily be replaced with brown rice pasta, finding a way to get away from grains entirely can change up the way pasta dishes factor into your diet. But they can also be exciting, and guilt-free!

There are a few options for the vegetable to noodle transformation. The tool specifically crafted to get those long, spaghetti-like noodles is the spiralizer. While pricey, these are useful for the dedicated raw food enthusiast. For those just starting to experiment, or who want to switch up their diets, but aren’t giving up grains entirely, you can make noodles without a spiralizer. Julienne mandoline slicers and even vegetable peelers can get long, thin, noodle-like strips. A grater is also a possibility, but the end-product will be a little more like hash browns than noodles.

Even if you’ve never gotten to try them before, chances are by now you’ve at least seen pictures of zucchini noodles. As much as we love zucchini noodles, (and we do), they’re not the only option. If you’re not that into zucchini, or are ready to try something new, any reasonably hard, raw-safe vegetable can become a raw noodle. 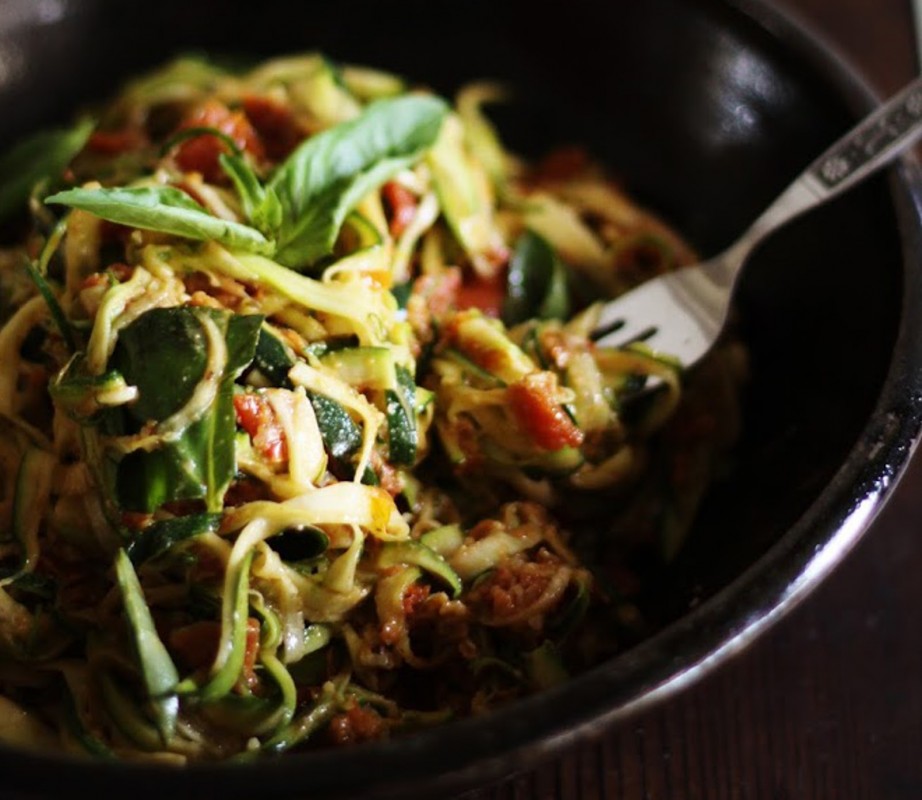 Summer squashes, including zucchini, are harvested before they mature, so that the rinds are still soft enough to eat, and are the best squashes for raw uses. Honestly, there is a reason zucchini is everybody’s darling. It’s easy to imprint with new flavors and keeps its shape without being hard to cut. If you’re just getting started on raw noodles, you may still want to start with Zucchini Pasta With Pumpkin Seeds and Garlic, and Raw Vegan Zucchini Marinara Pasta.

The cousa squash is like a zucchini, but with lighter colored, thinner rind and slightly sweeter. Basically, it’s perfect except for being unlikely to turn up in grocery stores. One easy squash to find, which works very similarly to zucchini, is the yellow squash. If using the yellow hookneck squash, the narrow neck won’t go through the spiralizer properly, but the rest will turn out just fine. The curved, pale green tromboncino is also worth a try if you can find it. If the raw part of the diet isn’t as important to you as the grain free, other squashes can be noodlified and cooked as a substitute for pasta in any pasta dish. Spaghetti squash even makes its own noodles without help. 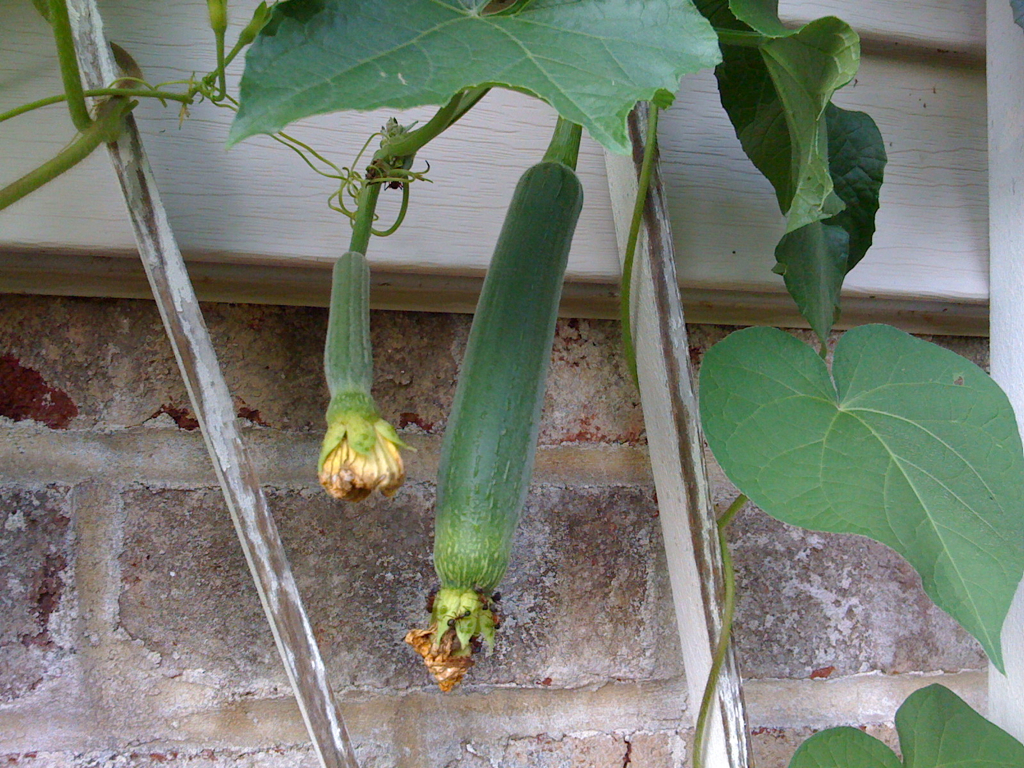 Cucumbers easily spiralize or peel into soft, thin strips. Depending on the dish, and for those who prefer their pasta well-done, these can be ideal. They’re particularly scrumptious in Sesame-Ginger Cucumber Noodles With Mint and Edamame. Luffa is in the Cucurbitaceae family with cucumber, and can be used like a cucumber. Luffa is popular in China and Vietnam for use curries, chutneys and stir fries, and unlikely to be found in the United States. If you do happen to find luffa, noodles are one more popular things you can do with them.

A Veritable Rainbow of Peppers 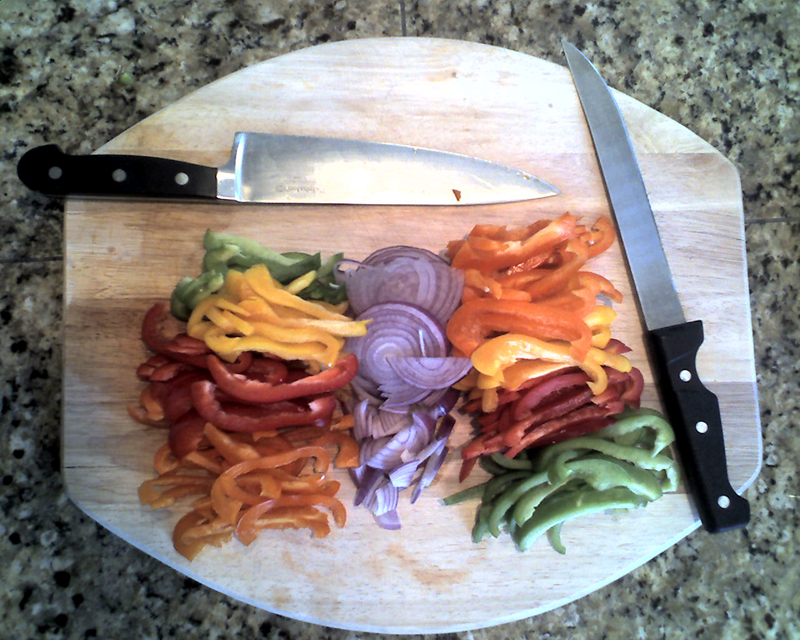 Slice peppers in long, thin strips, or even with a knife in a spiral. Hollow foods don’t work in a spiralizer, but turning the pepper in circles along the blade of a mandolin slicer can accomplish a similar effect. 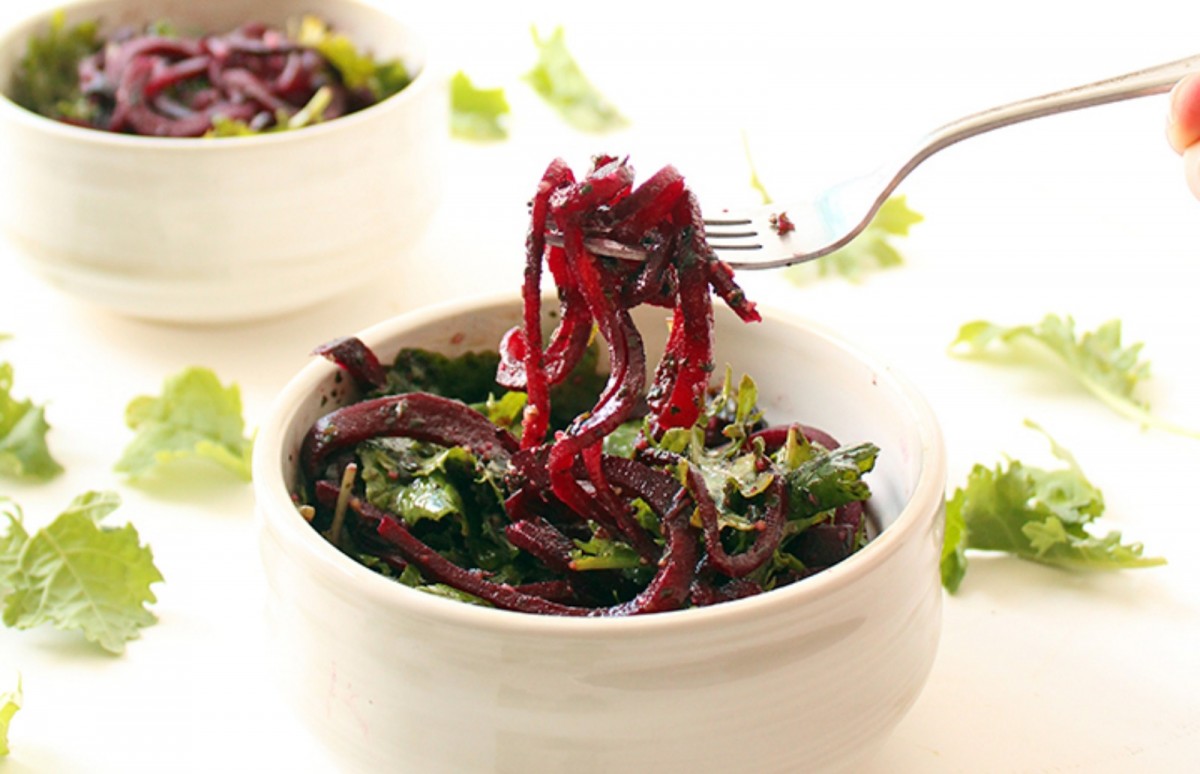 Root vegetables have a wonderful array of tastes and shades, and can make a dish alone or add color other veggie noodles. Jicama is a crisp root vegetable similar in taste to the asian pear, and prone to breaking when bent, but especially good for a refreshing snack. When shopping, aim for thicker, longer root vegetables, and peel before noodling them. The bite-sized radishes and turnips won’t be able to go through the spiralizer, and could be a risk to the skin on your thumbs if you peel or grate them.

Root vegetables are hard, so make sure your tools are sharpened properly, watch your fingers, and prepare to be a little patient. Potatoes are not recommended for raw consumption, although technically edible, because of the potential for toxic alkaloids. However, yams can turn into dishes as fabulous as this Sweet Raw Yam Noodles with Mushrooms and Sesame Seeds. Other vibrant combos are Carrot Beet Angel Hair Pasta with Spicy Pine Nut and Pistachio Pesto. 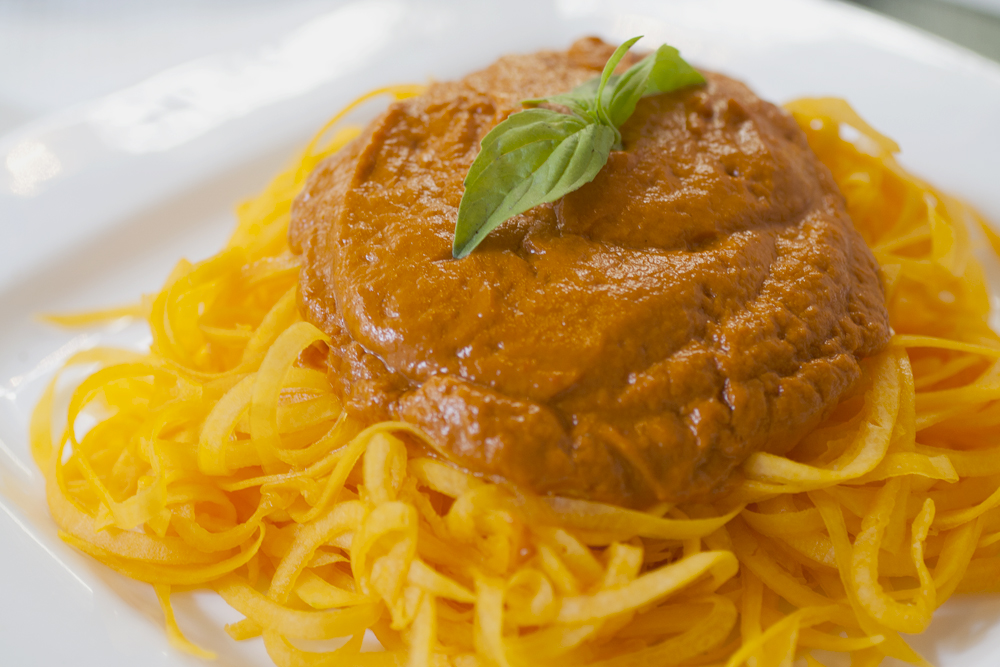 Take pasta in a fruity direction, and try a sweet and sour or sweet and spicy sauce to bring out the most in this combination. Asian pears, which stay firm when ripe, will hold up better for noodles. Both apples and pears can go through a spiralizer, but do make sure to remove the seeds and stems afterwards. 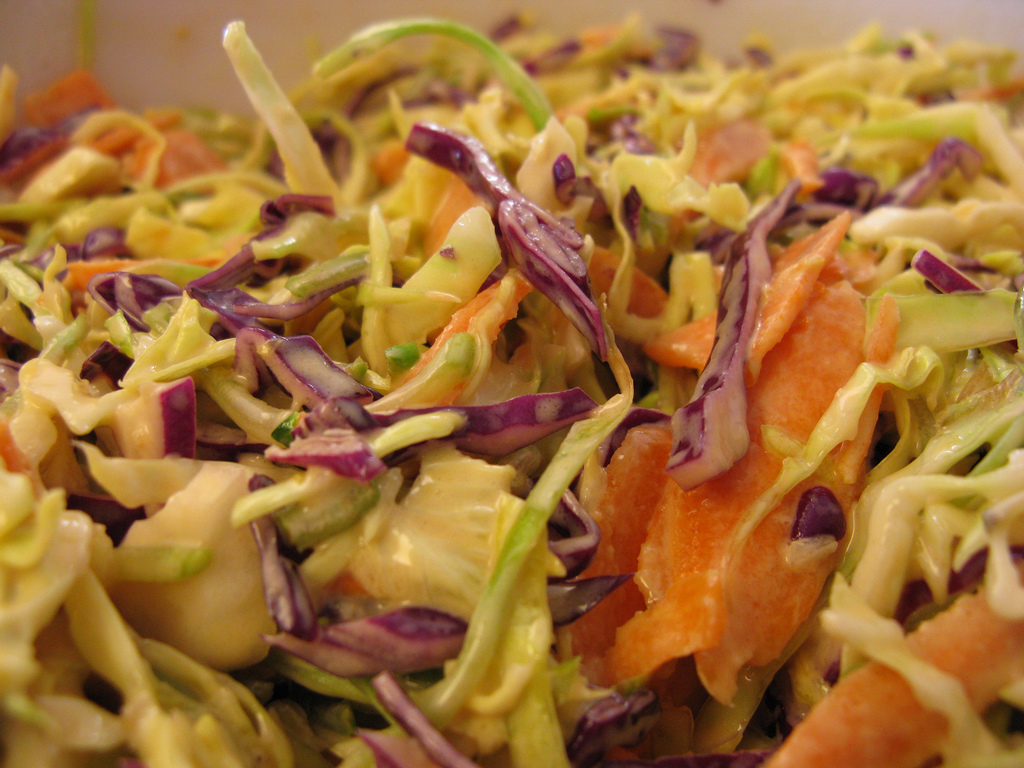 Fennel bulbs, onions and cabbages will all go through a spiralizer, but they don’t need to. Cut in half the long way from root to stem, and then in narrow horizontal strips and separate the rings to create noodly goodness. Soak, or salt and leave them to sweat if you want them to get soft. The effect of cabbage is a bit like slaw, but with a raw marinara sauce will be recognizably pasta. Fennel is going to be the least cooperative, making for harder, shorter pasta, but compensates with its distinctive refreshing flavor. For last-minute prep, and getting started without tools, these three will be your saving grace, and a mandolin could certainly speed up the process. All three together balance each other, and provide more variety when combined in a dish. 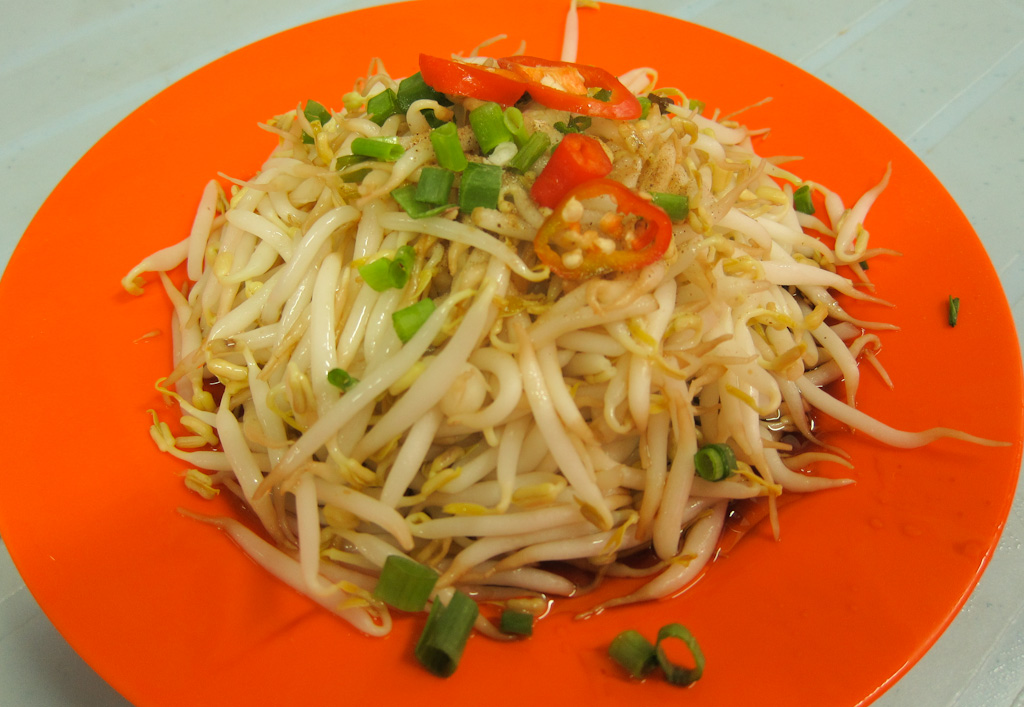 Finally, if you want to do zero work at all, except perhaps sprouting the beans, bean sprouts already look like pasta!

We find it useful to think of looking away from grains and gluten as an opportunity, rather than a restriction. Pasta can be infinitely interesting. Experiment with sauces, and mix together different vegetable noodles. Believe it or not, this actually isn’t a comprehensive list, and there are more veggies you can use to Switch Up Your Pasta Game.