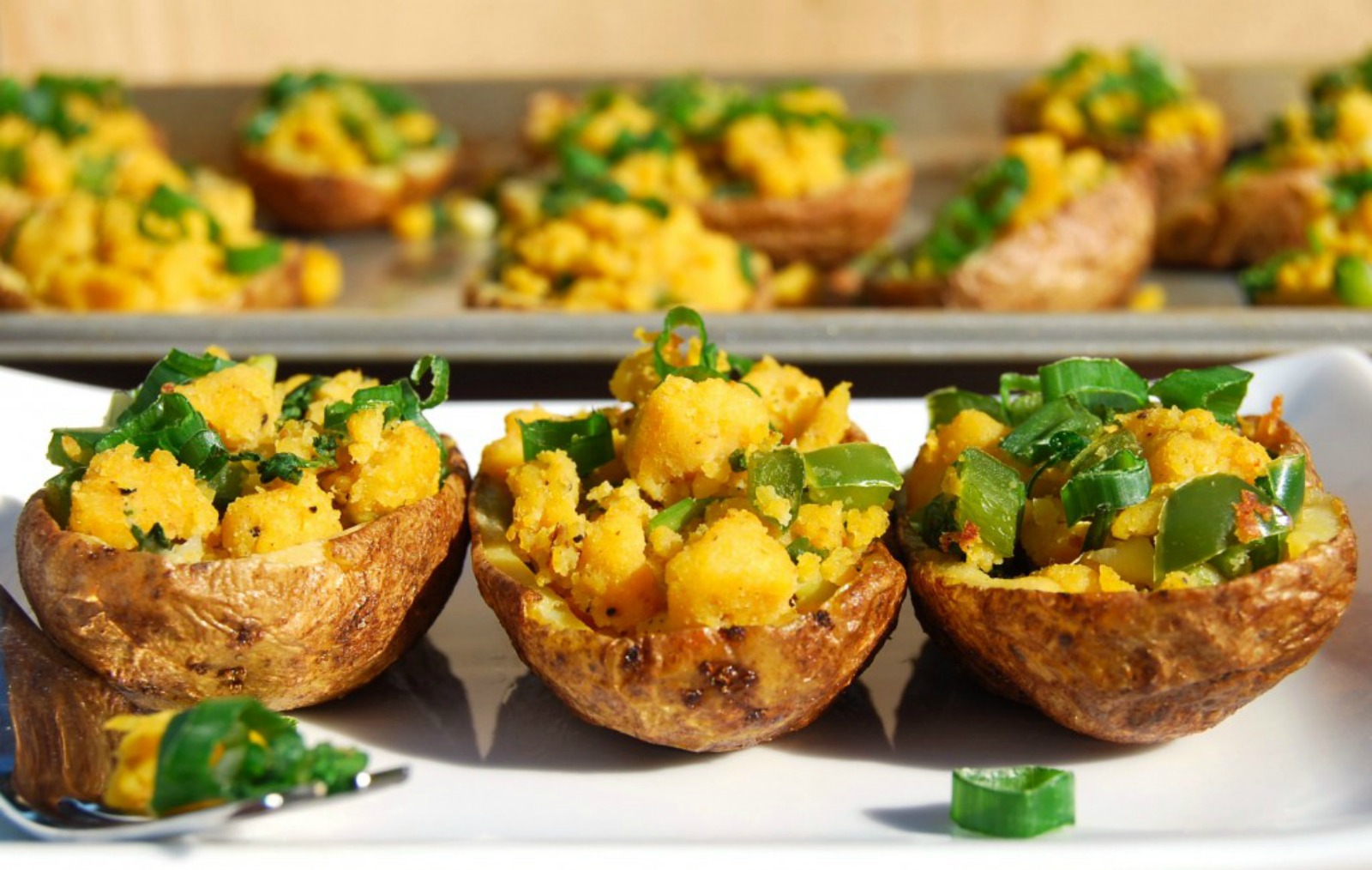 Cheap, filling and fun—baked potatoes have a way of making folks smile, especially on a chilly winter’s day when that something plentiful and piping hot has made its way into your belly. Or, even on summer’s day, the skin crisped on the barbecue … Who doesn’t like a baked potatoes?

The weird thing is that sometimes, for some foolish and forgetful folly, it’ll be ages between them. It’s almost as if, after hiding beneath the soil, lost in the onslaught of French fries and kettle pot chips, perhaps the healthiest form of potato gets overlooked. Well, no more! Today is the day in which these wrongs are righted.

Of course, cooking the baked potato is important, and there are many methods to appreciate: the six-minute microwave quickie, the camp coal cook up, the timely oven toss. Try them with the skin coated in a little oil, cracked black pepper and sea salt.

Whatever the case, there is no doubting it’s all about the toppings. Now, we’ve been around the world sampling baked potatoes, and what we’ve definitely come to recognize is that sour cream and chives is not the end of this story. People are putting all sorts of good stuff on their potatoes, and they are badass. 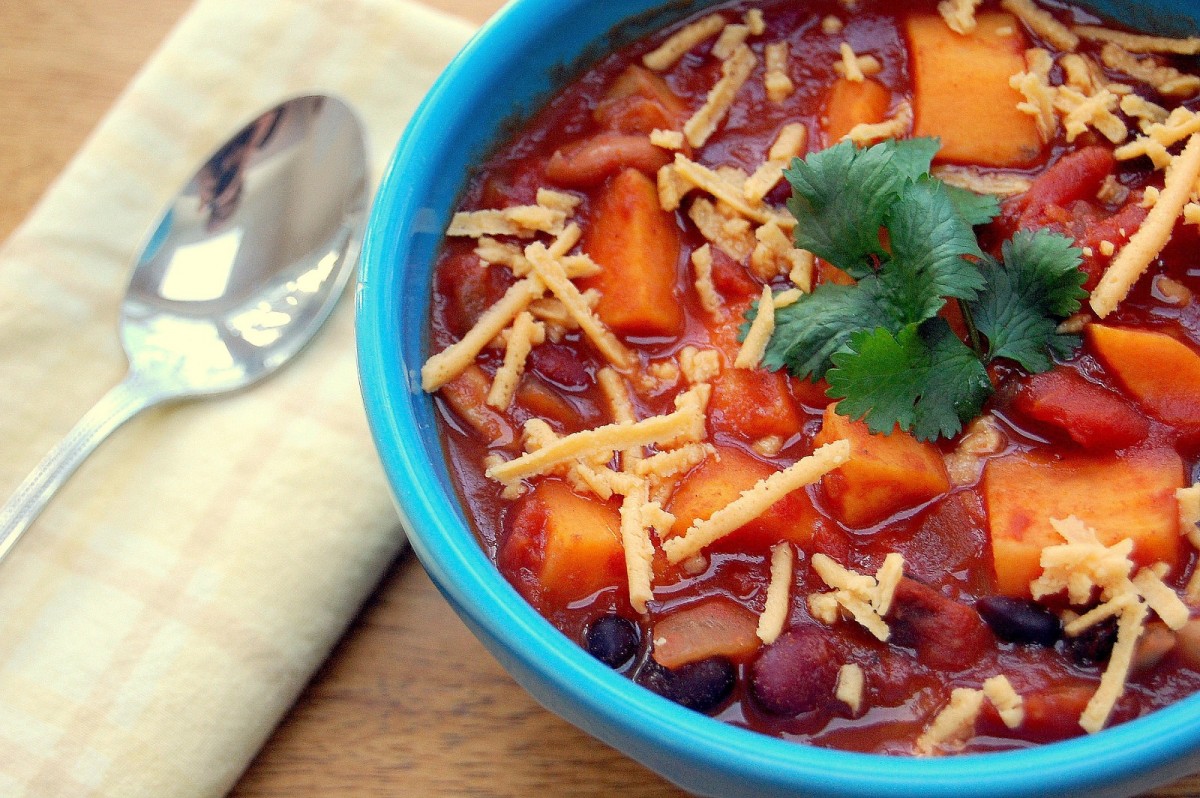 Get a bowl, get a potato and get some chili on that sucker. Make the chili yourself with this easy recipe, or in a pinch, there are loads of brand options at your disposal. Don’t forget to go all out with your favorite shredded vegan cheese and jalapeños. It’s like a Frito pie but with potatoes.

In Istanbul, kumpirs are a café classic. They are baked potatoes with a sandwich shop-style line of toppings, including couscous, cole slaw, sweet corn, olive mixes, pickles, peas, marinated mushrooms,… the kitchen sink. Make sure you have somewhere to rest and digest. 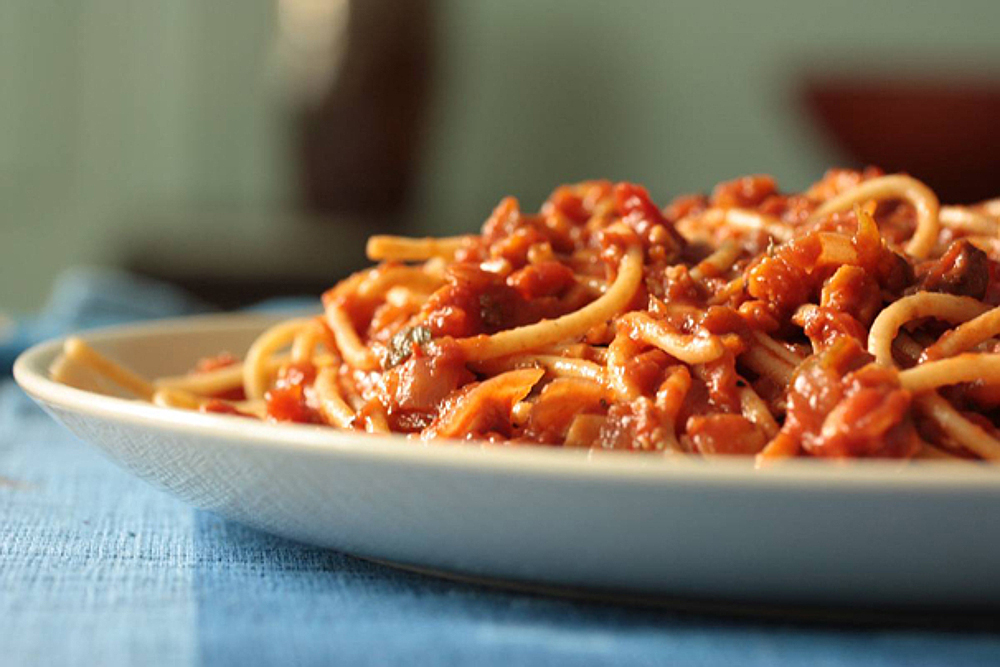 Don’t like gluten? Don’t like pasta? That’s no reason to give up a good vegan bolognaise! Sound odd? Maybe so, but remember potatoes (fries) and tomatoes (ketchup) go well together elsewhere. Only this time it’s a gut-busting meal with a shot of B12 from the nooch on top.

Putting tuna and mayonnaise on a baked potato is a British tradition, but personally, we much more relish the thought of this chickpea “tuna” salad. Top that off with some sprouts and diced tomatoes and it’ll be rockin’ twice the flavor and none of the fish. 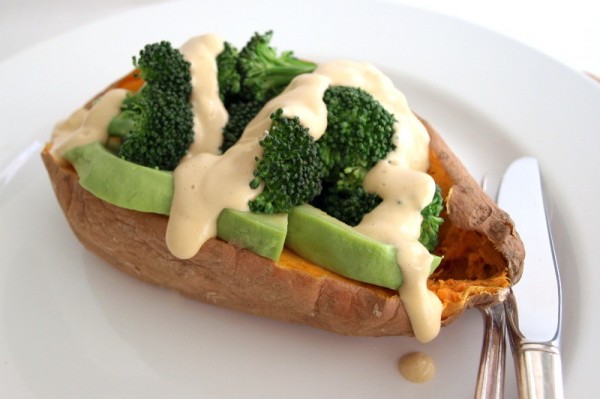 Forget about it. It’s a classic diamond in the spud. Nothing works so fine as to dine on broccoli with a creamy “cheese” over the florets, save for maybe tossing that all onto a chunk of baked potato. Just steam the broccoli, load up the potato and douse both in this quick and easy uncheese sauce.

Why not? Hash browns don’t have to be the only morning nod to the potato. Make a delicious tofu scramble, southwestern style, only put it into the potato instead of potatoes into it. (Kind of makes me want to wake up with a hangover next Sunday. What a brunch!) 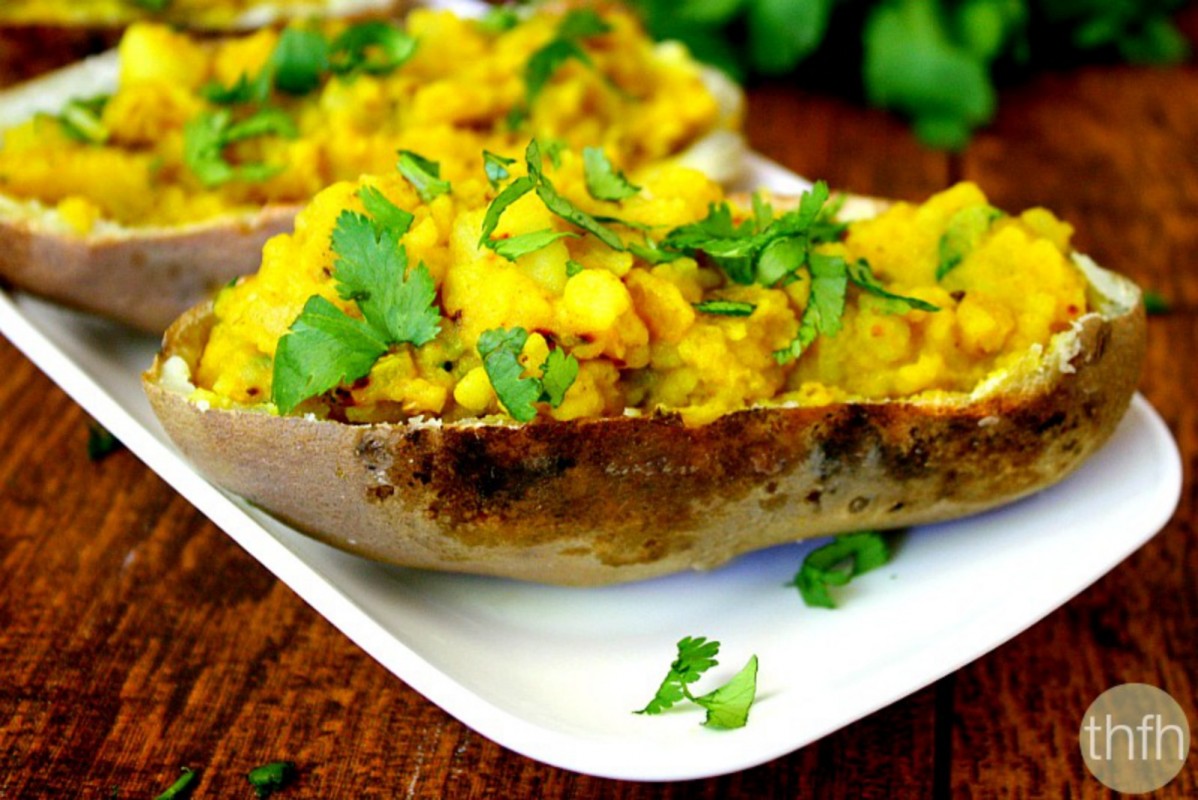 It would be an injustice to the world to ignore the delight that is a sweet potato. They can provide a twist on any of the aforementioned recipes, but what they can add to the mix is the dessert for dinner aspect of things: How about Gluten-Free Sweet Potato Brownies? Yes, that will do.

Oh, we couldn’t even count the ways, but what a way to handle a meal. Baked potatoes are just the perfect parcels for holding so many familiar flavors.