How to Make the Perfect Baked Potato 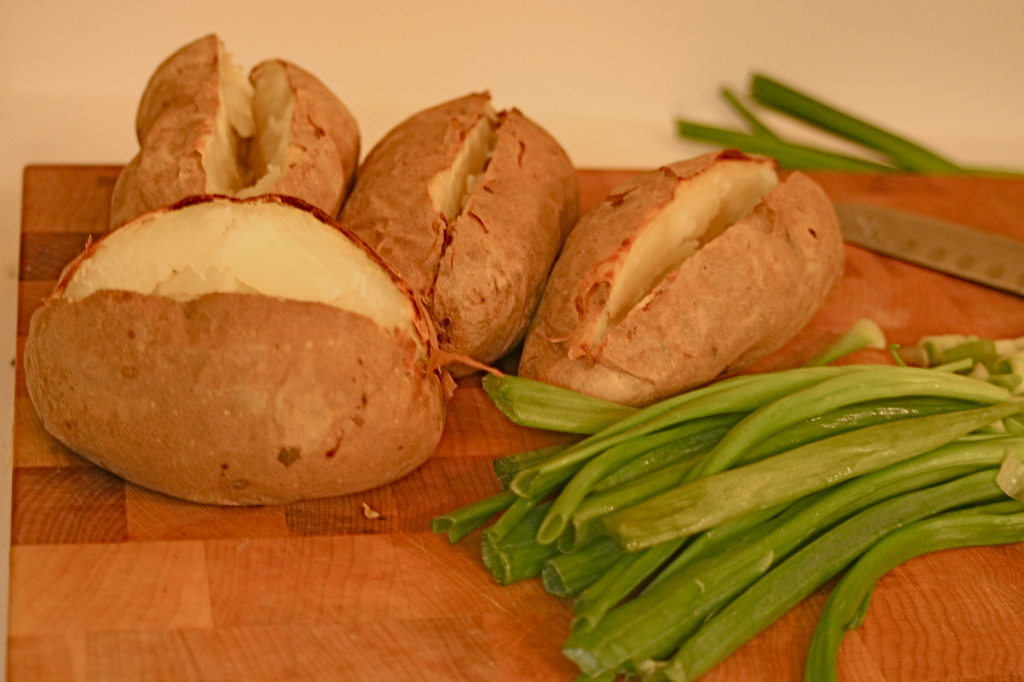 Potatoes are sometimes seen as starches that aren’t nutritious or delicious, but they can be both of those things, especially when they are baked! To ensure that your baked potatoes are the best, we have compiled five key steps in the baked potato making process. Read on, and be edified!

Settling for subpar spuds is always a bad idea, especially when baked potatoes are considered. Grab large, organic taters that don’t have roots growing out of them or pimple-like shoots running all across their skin. The indents in potatoes are called eyes and the things that grow out of them are shoots. Don’t be alarmed if you have week old potatoes in your kitchen that start growing these shoots out of their eyes: it’s not alive, Dr. Frankenstein, they are just  potatoes doing their thing. But, for baking potatoes, it’s best to start with a clean product, free of shoots.

Grimy ground grown spuds need to be thoroughly washed. If you want your spuds to be super clean, wash them with filtered water in a big pot, scrubbing off dirt in the eyes and the occasional shoot. A shiny spud is a happy spud.

3. Wrap it in tinfoil

Get yourself some tinfoil to wrap up your spuds. You might need one or two sheets of tinfoil per potato depending on the size of them. Before wrapping said spud, take a pitchfork and stab it silly. No, I’m joking, take a normal fork and puncture holes in it. This will allow for the heat to better penetrate the potato. To wrap your spud, start with the corner of the sheet and roll the spud up like you’re swaddling a baby up in a blanket. Swaddle that spud! Make sure it’s fully covered in its tin blanket.

4. Start up the oven

For large or medium sized potatoes, it may take an hour or so at 400 degrees F to cook them through. You can check them after 45 minutes have elapsed with a fork. Simply stab the spud with the utensil and see if it goes all the way through similar to the aforementioned step about stabbing. If the fork does not go all the way through the potatoes or if they’re still hard, they are not done yet, so let them bake for another 15-20 minutes.

5. Add on some toppings

Salt and Pepper. Hummus. Broccoli. Spinach. Refried Beans. Salsa. Onions. You can put a ton of stuff on baked potatoes, and it all tastes delicious. Or, you can eat it plain; no one will judge you. So, when your baked potatoes are done, take them out of the oven with an oven mitt and unwrap them, leaving them on the tinfoil as a wimpy plate. Slice the tater down the middle, and put whatever suits you on it. You could even cut the potato up into little cubes and put them in a stirfry or in some soup. As Samwise Gamgee says, ” po-ta-toes, boil ’em, mash ’em, stick ’em in a stew.”

Get a bag of potatoes, and don’t be scared to bake them. They are great vessels that can hold numerous toppings, and they are so simple to prepare. Make your next meal a baked potato!