How to Make These Classic Sauces Vegan 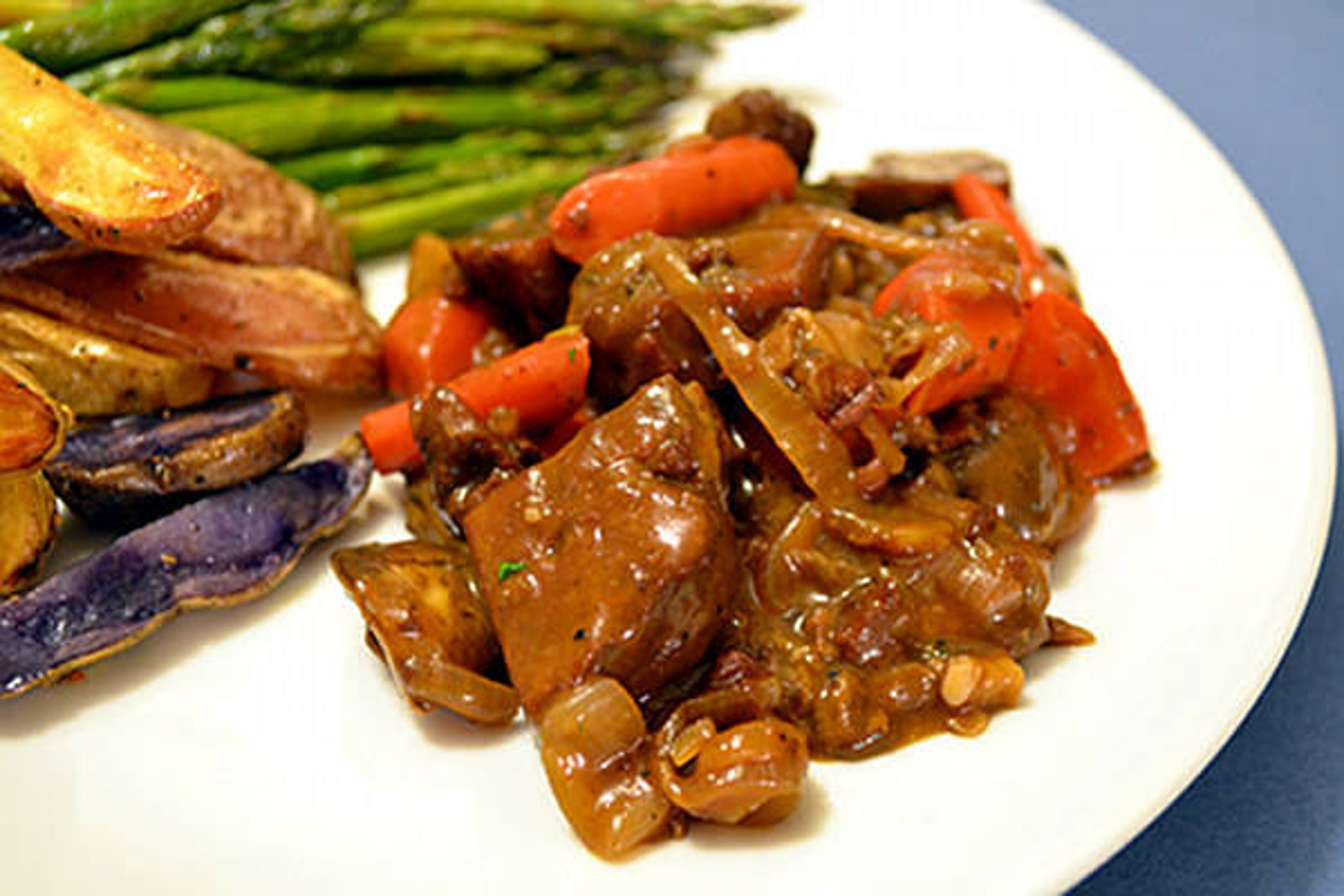 One of the most important classes taught in culinary school is how to make the “mother sauces,” or so I hear from watching way too many cooking shows on television. The term “mother sauces” refers to each sauce being like the head of an individual family of sauces. Each of the five basic sauces is a starting point for making secondary sauces by adding herbs, spices or other ingredients. The five mother sauces – béchamel, espagnole, veloute, hollandaise and tomate – differ by their main ingredients, flavors and thickening agents. That’s all sauces really are – liquid, thickening agents and flavoring. While these classic sauces are usually made with meat, eggs and dairy, with the help of a few substitutions and some creative thinking, it’s easy to make vegan versions of all of them. Nothing turns a plate of ingredients into a composed dish like a sauce does. Knowing how to make these classic sauces is definitely something you want to have in your cooking arsenal so let’s take a look at these mother sauces and turn them into compassionate, healthier Mama Sauces.

If you have ever eaten macaroni and cheese or fettuccine Alfredo, you have eaten a béchamel sauce. Béchamel is a creamy white sauce which uses milk as its base and is thickened with a white roux. A roux is a mixture of equal parts fat (oil or butter) mixed with flour. The sauce is then flavored with salt, pepper and nutmeg (and sometimes onions and cloves) and simmered until it is thick, creamy and smooth. Béchamel sauce is the base for other common sauces including cheese sauces and cream sauces like the one that tops my Moussaka Burgers. Béchamel sauce is mostly used in lasagna, mac and cheese, gratins and casseroles.

Here is how I make vegan béchamel sauce: Over medium-low heat, I heat 1 Tbs. olive oil or vegan butter in a small saucepan. Whisk in 1 Tbs. flour (any flour is fine) until the flour is completely incorporated into the oil or butter. Let the flour cook for at least a minute so you don’t end up with a pasty, flour taste. Slowly, whisk in room-temperature non-dairy milk. Let the sauce cook for a few minutes, stirring occasionally, until it thickens. Add salt, pepper and a pinch of nutmeg.

If you want to make a lighter béchamel, you can use a combination of non-dairy milk and vegetable broth which is what I do when I make white gravy. To make a vegan cheese sauce, turn off the heat and simply whisk in ½ cup of any vegan cheese until it is melted as I do in my Baked Macaroni and Cheese.

An alternative method for making a vegan cream sauce is to combine 1 cup of raw cashews that have been soaked for a few hours with water, salt, pepper and the zest and juice of one lemon in a food process. Mix until the cream is thick and smooth, about 2 minutes. You can also add other flavors such as onions, garlic, nutritional yeast, mustard and tahini as I do in my Rotini Alfredo with Asparagus and Peas.

Veloute is basically like béchamel but instead of milk, it is made with a light-colored stock. It is made by forming a roux and whisking in the stock. Then other ingredients such as mushrooms, shallots, herbs, spices, cream or white wine are added to make secondary sauces such as mushroom or white wine sauce. Veloute is usually made with chicken, fish or vegetable stock and is served with lighter dishes. Of course, for our vegan version, we will use vegetable stock or broth.

Here is how I make a delicious Mushroom Veloute Sauce that is amazing served over pan-fried tofu cutlets or seitan steaks: Melt 2 Tbs. vegan butter or oil in a saucepan over medium heat. Whisk in 2 Tbs. flour until the flour is completely incorporated into a roux. Let the flour cook for at least one minute. Slowly add in 2 cups of low-sodium vegetable broth and whisk until smooth. Bring the sauce to a boil, and then reduce to simmer. Add ½ cup sliced mushrooms and 2 Tbs. minced shallots to the pan. Simmer for ten minutes, and then season with salt and pepper to taste.

You can also add non-dairy milk or cream to this sauce to make an amazing mushroom cream sauce that is incredible over pasta as in this Succulent Tortellini with Mushroom Cream Sauce.

Brown gravy. Yes, Espagnole sauce is really just a brown gravy. Ok, it’s a very complex brown gravy but still… It is traditionally made with a dark roux, aromatics, and beef stock. Sometimes tomato paste is added. Usually, the pan drippings or fond from whatever meat is being cooked is also incorporated for extra flavor. Espagnole is often reduced to make a demi-glace which is a rich, deeply flavorful sauce which can then, in turn, be made into various other sauces like mushroom gravy. This Mushroom and Seitan Bourguignon is an example of a dish with an espagnole-type sauce.

Here is how I make a vegan espagnole sauce: Melt 2 Tbs. vegan butter or oil in a saucepan over medium heat. Add 1 small diced onion, 1 diced carrot, 1 diced celery stalk and 2 minced garlic cloves and cook until softened and translucent. Whisk in 2 Tbs. flour and make a roux. Let the roux cook for several minutes until it becomes medium brown. Whisk in 2 cups of warm vegetable or vegan “beef” flavored broth and 2 Tbs. tomato paste. Stir until there are no lumps. Add salt, pepper and a fresh bay leaf. Bring the sauce to a boil, then reduce the heat and let simmer for 15-20 minutes, uncovered, until reduced and thickened. If it gets too thick, add more broth. Strain the sauce before serving to remove the solids, if desired.

An easy version of an espagnole is making simple pan gravy. After you have already cooked food in the skillet, whether it be mushrooms or seitan steaks, there are always little brown bits of food left in the pan. This is called the fond and it is full of flavor. Just add some vegan butter, a little flour for thickening, salt, pepper and then some liquid to deglaze the pan. It can be broth, wine, balsamic vinegar or sherry. Scrape up the fond with a wooden spoon and stir the gravy until it is thick and smooth. That’s it. This is also the same way I make gravy for my Seitan Pot Roast.

Hollandaise sauce is a bit different from the other mother sauces in that it is made by whisking clarified butter into warm egg yolks. The butter is the liquid rather than milk or broth and the thickening agent is the egg rather than the roux. Hollandaise sauce is rich, creamy and tangy. It is most commonly known for being served with Eggs Benedict or over asparagus.

There are multiple ways to veganize Hollandaise sauce. Here is how I do it: Melt 2 Tbs. vegan butter in a saucepan over medium heat. Whisk in 2 Tbs. of flour until you have a roux. Let the flour cook for a minute or two. Slowly whisk in 1 cup of room temperature non-dairy milk. I prefer full-fat coconut milk for the richest, creamiest results. Whisk in a teaspoon of Dijon mustard, the juice of a lemon, a pinch of cayenne pepper, a pinch of ground turmeric and salt and pepper to taste. Bring the sauce to a boil, then reduce the heat and let simmer until it thickens. Serve warm.

The fifth and final mother sauce is the classic Tomate Sauce and no, I’m not misspelling tomato. Tomate sauce is similar to the tomato sauce we all know and love on our pasta and pizza but it is usually made with aromatics, meats and meat stock. The base of the Tomate sauce is tomatoes and it is traditionally thickened with a roux but this isn’t necessary as the tomatoes are usually enough to thicken the sauce. Once you have a basic tomato sauce, you can add other flavors, spices, herbs and ingredients to make many secondary sauces such as Puttanesca, Spanish or Arrabiata.

My vegan version of the classic tomate sauce is what I call “My Mom’s Marinara Sauce.” Heat a tablespoon of olive oil in a saucepan. Saute one diced onion and 3 minced garlic cloves in the oil until softened and golden. Add 4-6 cups of crushed and diced tomatoes (depending how much you want to make) to the pot. Season with 1 teaspoon each of oregano, basil and parsley, as well as salt and pepper to taste. After 20 minutes of simmering, the sauce is thick and ready to be used with your favorite Italian recipes like Ooey-Gooey Baked Ziti or Spaghetti and Tempeh Meatballs. Sometimes I change it up a bit by sautéing mushrooms along with the garlic and onions. This makes it a meatier and more filling sauce. When I want my sauce to be spicier, I add red pepper flakes and sometimes, a bit of ground fennel for added depth. To make a Mexican version, I start with sofrito – a mix of onion, garlic and peppers – and season with cumin and coriander rather than the Italian seasonings.

See? It’s not intimidating at all. These are just 5 basic sauces that if you know how to make and adapt them, a whole world of recipes and delicious dinner possibilities will be open to you. Forget the fancy French names and become familiar with these vegan Mama sauces.

Lead Image Source: Mushroom and Seitan Bourguignon with the Boxer