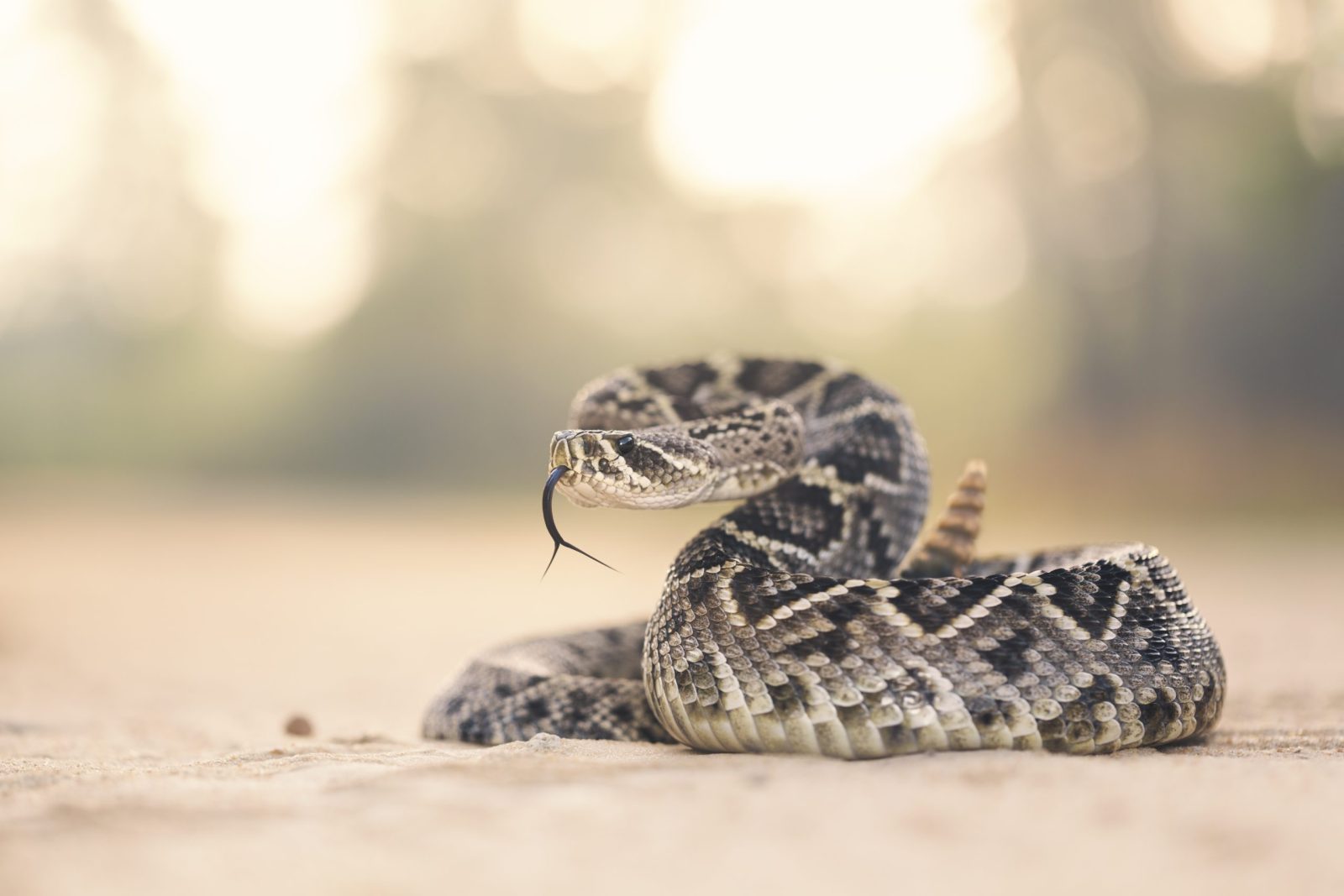 In the United States, the vast majority of snake species are non-venomous. There are only 22 species (37 subspecies) of venomous snakes in the USA.

Most of these venomous snakes are pit vipers, which include rattlesnakes, cottonmouths, and copperheads. Only the coral snake, amongst venomous snakes in the US, is not a pit viper. It is an elapid snake, the same family as cobras and sea snakes.

There are roughly 7,000-8,000 people who are bitten a year by venomous in the US, and just over a quarter of them (1750-2,000) envenomate victims. More than half of them are the result of someone handling the snake. As a country of 330 million people, we average about five deaths a year from snake bites, less than from bee stings or lightning strikes.

Even so, it’s good to have a healthy respect for snakes as potentially dangerous creatures, and it’s even better to understand which snakes are and how to identify them. The first step to that is becoming familiar with what venomous snakes might live where you live, and from there, it’s just a matter of learning what they look like, where they inhabit, and how they behave.

Technically, coral snakes have to most potent venom of the US snakes; however, it is rarely encountered. They are very shy burrowers and non-aggressive. They spend most of their lives hidden underground or beneath piles of stuff.

Also, they don’t have retractable fangs like vipers. Their fangs are quite small and require something more like chewing to deliver venom as opposed to the quick strikes of rattlesnakes and copperheads. They also have small bodies, less than a couple of feet long, and often thin.

Coral snakes usually have bands of red, yellow, and black, and people use the mnemonic device “red touch yellow, kill a fellow” to differentiate coral snakes from similar-looking snakes like the scarlet kingsnake.

Copperheads, though venomous pit vipers, don’t have particularly potent venom. However, they can be a little aggressive when threatened and strike quickly. The species is responsible for the most venomous snakebites in the United States, mostly because they are well camouflaged in the leaves of the forest floor and get stepped on.

Like other pit vipers, copperheads have a triangular-shaped head, providing room for the retractable fangs and venom glands. Their heads are also, surprise-surprise, a coppery color. They also have vertical pupils rather than round, a common trait for venomous snakes.

Copperheads are relatively short snakes, usually between two and three feet, but they have stocky bodies thinning out towards the tail. They have hourglass patterns across their backs, usually in darker shades of brown than the rest of the body.

This type of snake accounts for the most venomous species in the US. There are over 15 species of rattlesnake in the US and at least twice as many subspecies. In other words, they come in many shapes and sizes as well as live in lots of different climates and terrains, but they do have some distinguishing characteristics that are shared.

The tell-tale sign of a rattlesnake is the rattle. Many of the different species will use that rattle to audibly warn against threats, which makes identification very easy. But, some don’t use the rattle quite as readily. Either way, spotting a rattle is a great indicator of a rattlesnake.

Eastern and Western Diamondbacks can each get up to 6 feet long, whereas pygmy rattlesnakes tend to stay under two feet. Nevertheless, they both have stocky bodies. Rattlesnakes have quite large, triangular heads, much wider than their necks, and they have the classical elliptical eyes of many venomous snakes.

However, where there are cottonmouths, they often come in abundance. They are semi-aquatic snakes, hence water moccasin, and they are pit vipers. Unlike other water snakes, they have vertical slit eyes, and they are apt to stand their ground when approached, exposing the cotton-white interior of their mouth as a threat.

Water moccasins can have a lot of different colorations, everything from clear patterning to completely black. Again, their bodies are quite thick and heavy, they can measure up to five feet long, and their head is wider than the neck and triangular and has a flat top.

Being able to identify dangerous snakes is a wonderful skill, and it can be reassuring. However, the right move is to simply give all snakes their due space and play it safe, observing from a safe distance. And, of course, snakes, venomous or not, play a vital role in the ecosystem, so they are valuable members of our animal kingdom.