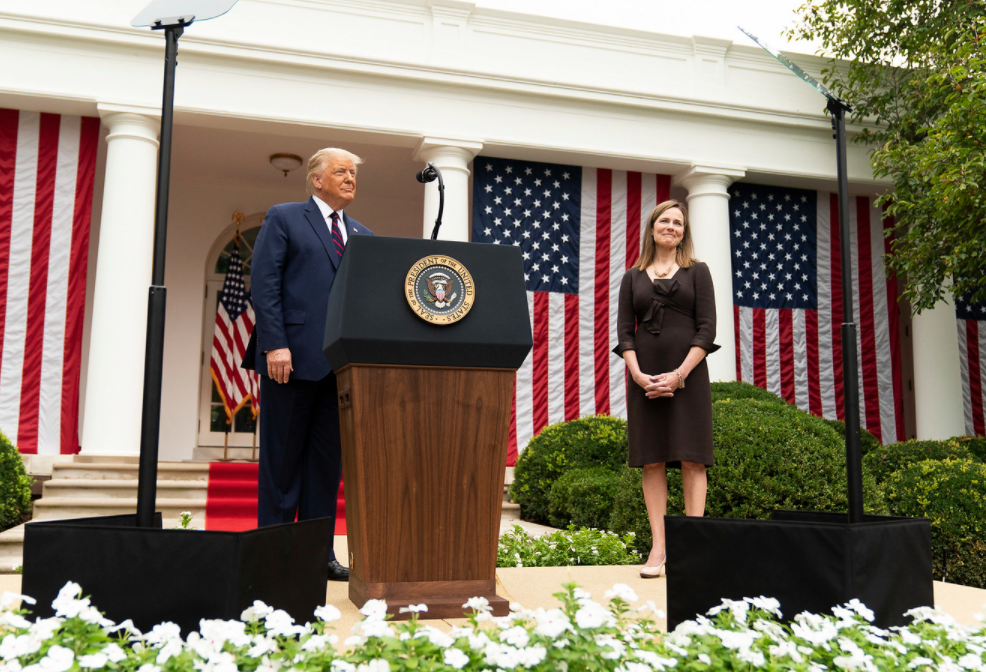 After the death of Justice Ruth Bader Ginsburg, the Supreme Court has been the subject of a heated political battle over her successor.

In her final days, Justice Ginsburg expressed that “my most fervent wish is that I will not be replaced until a new president is installed.”

Yet, on the same night of Ginsburg’s passing, Senate Majority Leader Mitch McConnell and Senate Republicans announced they will hold a vote on Trump’s nominee before the next president takes office, reversing McConnell’s precedent of refusing to hold hearings for President Obama’s nominee Merrick Garland six months before the 2016 election.

Barrett, an outspoken conservative judge supported by many Republicans, represents a real threat to issues including healthcare and women’s rights. At the first day of Senate hearings, Sen. Patrick Leahy (D-VT) explained why the American people are so concerned about this nomination.

“They are scared that you will rip away the health care protections that millions of Americans fought to maintain and which Congress has repeatedly rejected eliminating. They’re scared that the clock will be turned back to where women had no right to control their own bodies and when it was acceptable to discriminate against women in the workplace,” Leahy said. “And they’re scared that your confirmation will result in the rolling back of voting rights, workers’ rights, and the rights of the LGBTQ community to equal treatment.”

Based on her record, here’s how Barrett could severely endanger health care, reproductive justice, and LGBTQ and immigrant rights:

President Trump and Republicans have spent years working to dismantle the Affordable Care Act (ACA). On the Supreme Court, Barrett could solidify an end to the landmark law –  if the ACA is overturned, 21 million Americans could lose their health care and the insurance for 133 million Americans with pre-existing medical conditions would be at risk.

Amid a global pandemic that has claimed over 210,000 American lives, scrapping the ACA due to partisan concerns is unconscionable.

Eliminating the ACA could deny millions of COVID-19 survivors future health care or raise their premiums because COVID-19 itself or long-term health conditions from the virus may be considered a pre-existing condition covered by the ACA.

In a 2017 law review essay, Barrett criticized the court’s rulings to uphold the ACA arguing that Chief Justice John G. Roberts Jr. “pushed the Affordable Care Act beyond its plausible meaning to save the statute.” She praised Justice Scalia’s dissent against the ACA and argued that the Court distorted “either the Constitution or a statute to achieve what it deems a preferable result.” Barrett disagrees with the Court’s logic on the ACA as well as the ACA’s contraceptive requirement due to her Catholic faith.

The Supreme Court is set to hear arguments challenging the ACA on Nov. 10. If Barrett joins the Court, health care may be stripped from tens of millions of Americans.

The Supreme Court has played a critical role in the advancement and protection of LGBTQ rights including its rulings in Obergefell v. Hodges on marriage equality and in Bostock v. Clayton County protecting LGBTQ individuals from employment discrimination under federal law.

During a lecture she gave at Jacksonville University in 2016, Barrett said she supported the Court’s dissenters of Obergefell v. Hodges, questioning the role of the Court on marriage equality. She suggested laws on marriage equality should be left to the states rather than protected by federal law.

In the same lecture, she argued that Title IX protections do not cover transgender individuals and that protecting trans individuals would “strain the text of the statute.” LGBTQ rights are a matter of “public policy debate” rather than human rights in Barrett’s mind.

Her language, calling trans women “physiological males,” reflects her outdated views on gender identity. In 2015, Barrett signed a letter to Catholic bishops endorsing the church’s conservative views on abortion, sexuality, and marriage that says “marriage and family [are] founded on the indissoluble commitment of a man and a woman.”

Barrett refused to respond to questions regarding whether Obergefell sets a “superprecedent” which the court could not overrule. However, she has written about her willingness to overturn precedent in order to “enforce her best understanding of the Constitution rather than a precedent she thinks is clearly in conflict with it.” Her lack of respect for judicial precedent goes against foundational principles of the rule of law.

Barrett’s refusal to affirm the ruling on marriage equality comes as Justice Clarence Thomas and Justice Samuel Alito recently attacked the Court’s ruling on same-sex marriage, putting LGBTQ rights on the chopping block for the Court’s next term.

Barrett’s disregard for precedent extends from marriage equality to reproductive rights. Barrett has been publicly against abortion rights, calling for an end to Roe v. Wade in anti-abortion advisements. Drawing from her Catholic teachings, Barrett has written that abortion is “always immoral.” Overturning Roe could cause more than 25 million women to lose access to safe and legal abortions.

According to Planned Parenthood, 17 abortion-related cases are just one step away from reaching the Supreme Court, and the last two cases on abortion restrictions while Ginsburg sat on the Court were decided by just one vote.

If Barrett is confirmed, reproductive rights would be under attack with the court’s new 6-3 conservative majority.

Barrett has supported one of Trump’s key immigration policies to prevent low-income immigrants from entering the U.S. She dissented in Cook County v. Wolf, disagreeing with the Seventh Circuit’s decision to block the Trump’s “public charge” rule that “adds barriers for immigrants seeking green cards if they rely on public benefits, food stamps or housing vouchers,” Courthouse News Service reported.

On issues related to asylum and deportation, Barrett has taken a conservative stance often neglecting the human impact of immigration decisions. Barrett has refused to review a Salvadoran citizen’s petition for humanitarian protection after he was threatened by a criminal gang. She has also refused to reconsider a case brought by a naturalized U.S. citizen whose wife was denied a green card twice. She cast the deciding vote to immediately deport a Mexican immigrant who had been a lawful permanent resident of the U.S. for 30 years.

The future of tens of thousands of immigrants may end up in the hands of Ginsburg’s successor; with Barrett on the Court, the rights and humanity of immigrants will be pushed aside in favor of greater restrictions on immigration.

From health care and reproductive rights to LGBTQ and immigration issues, civil and human rights are at risk if Barrett joins the Supreme Court for a lifetime position. Over 150 civil rights and public interest groups have voiced their opposition to Barrett’s confirmation.

“Judge Barrett’s confirmation to the Supreme Court would grant President Trump nearly unchecked power to continue the devastating assault on civil and human rights in America, and it would cement an ultraconservative supermajority that could jeopardize critical rights and freedoms for generations – the very rights and freedoms that Justice Ginsburg helped secure during her nearly three decades of service on the Court,” the coalition’s letter reads.

Barrett has ruled against criminal justice reform, gun safety laws, sexual assault victims, among other laws to protect human rights. Her previous rulings and controversial beliefs present a significant threat to Americans’ rights and liberties that have been protected by the Court for decades.

Read more about the importance of voting and how to hold members of Congress accountable.