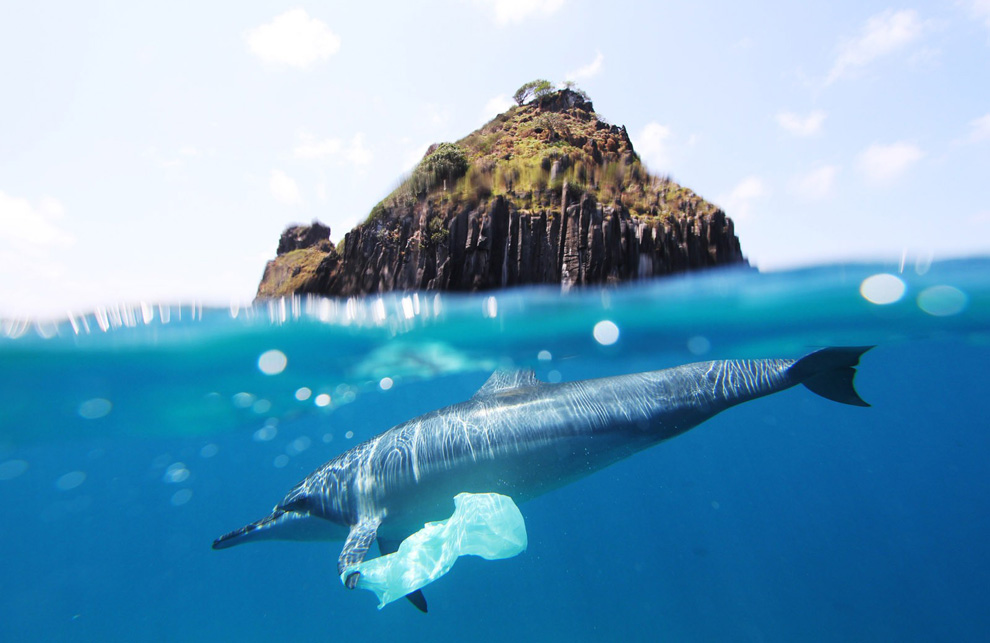 Marine life is currently under attack from all sides by plastic. From plastic in the form of large plastic bags and 2-liter soda bottles to tiny microplastics, our oceans are absolutely inundated with the stuff. It’s turning up on shorelines, in the stomachs of ocean life, and as giant patches, thousands of miles removed from civilization.

The relentless and ever-growing plastic problem our marine ecosystems face is massive. An estimated 8.8 million tons of plastics make their way into our oceans worldwide every single year. And while this sad fact is partially due to a growing population without a comparable and effective waste disposal system to match, marine plastic pollution is also the result of hundreds of little choices we all make every day at the individual level.

With 80 percent of marine plastics originally being sourced from land, it stands to reason that we carry much of the weight in reducing the amount of plastics that reach our oceans. Let’s discuss a few simple ways we can drastically cut our contribution of plastic pollution to our oceans and be superheroes to whales and fish everywhere! 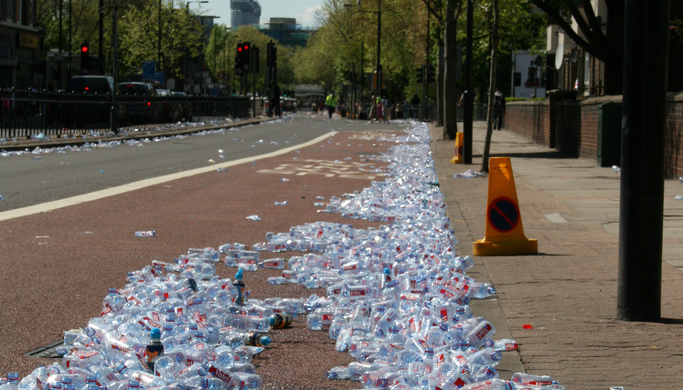 Staying hydrated is super important but you can certainly do it without bottled water. Relying on plastic to get your H2O on is proving to be really rough on the environment – Americans use an estimated 50 billion plastic water bottles a year. Sadly, only 23 percent of these actually end up recycled. The rest may end up in a landfill or even lost at sea. Switching out plastic for a reusable water bottle or cup is a much better choice for our oceans.

Your daily coffee (or tea) fix might be contributing to plastic pollution if you’re not careful. Every to-go cup of the hot stuff you buy at the gas station or local café most likely comes topped with a plastic lid and maybe even with a plastic drink stirrer thrown in the mix. If you buy a cup of coffee every weekday, that’s hundreds of plastic lids and stirrers wasted every year! In fact, 138 billion plastic stirrers (and straws) are tossed out in America on an annual basis. Want to kick this plastic habit without losing your caffeine fix? Invest in a reusable thermos or mug and stir your cream and sugar with silverware.

Like hot beverages you consume outside the home, cold drinks you’re served in a portable cup may also carry unwanted plastic. A soda or iced tea from a fast food joint is often accompanied by a plastic lid and straw, and maybe even housed in a plastic cup. Maybe you’re eating somewhere you can use a reusable cup, or you can ask for the cup minus the lid and straw. Need proof this change will make a difference? Check out how painful a single plastic drinking straw was for a sea turtle earlier this year. 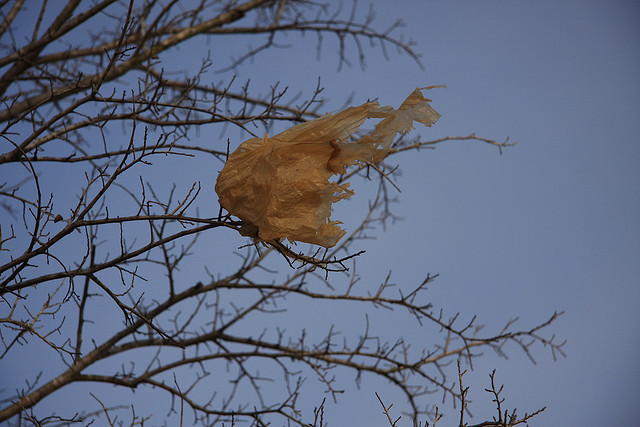 This one may be obvious, but we still can’t forget to mention it: nixing plastic shopping bags saves lives. Literally! A survey of leatherback sea turtles found that one in three has a plastic bag in its stomach. With the world using an estimated 500 billion plastic bags every single year, the ocean could certainly stand to benefit from us cutting out the stuff and replacing them with reusable shopping bags.

If you’re a smoker, please don’t forget to properly dispose of your cigarette butts once you’re done with them. Cigarette filters are actually not biodegradable as they’re made of plastic and pack quite a punch for the environment once you factor in the chemicals and carcinogens they leach. Once you stomp out your butt, put it in a trash can so it doesn’t end up in the ocean instead.

Styrofoam take-out containers are no fun for the environment. They are incredibly common forms of plastic pollution (when they aren’t taking up space in landfills) and are composed of a combination of toxic chemicals that can end up in both our bodies and those of animals that accidentally ingest them. You can avoid contributing to Styrofoam pollution by planning ahead and taking your own reusable containers with you when eating out.

Plastic packaging is really hard to avoid when shopping at a conventional grocery store, but try buying groceries with the intent of keeping as much plastic out of the picture as possible. Buy fruits and veggies that don’t come packaged in plastic bags or shrink-wrap. Aim for larger servings of packaged items in place of individually packaged ones (yogurt, chips, cheese, etc). Think these little changes can’t make such a big difference? Think again! Plastic packaging for food is actually the largest form of municipal waste in America, resulting in 80 million tons of waste every year!

Instead of opting for plastic cutlery, plates, bowls, and cups to use around the house, why not invest in some dishes and eating utensils that don’t get the heave-ho once the meal’s over? Using single-use plastics to eat every meal could result in thousands of pieces of plastic waste every year. But sticking with metal or bamboo eating utensils and plates and bowls that you can use time and time again would eliminate all that waste. 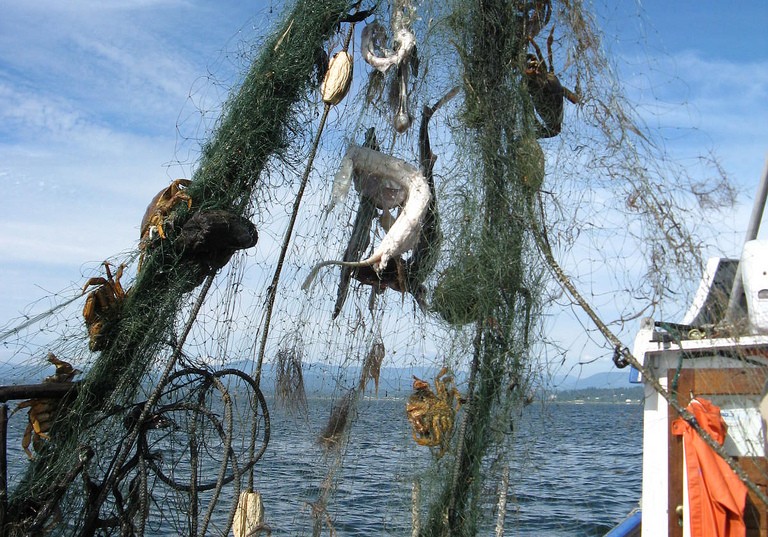 Plastic fishing gear has become a huge enemy of marine life. Both active fishing gear and discarded nets and lines present a problem for animals including sea turtles, whales, dolphins, seals, sharks, birds, and even corals. Cutting your support for this industry and replacing fish foods with plant-based alternatives could drastically reduce deadly plastics in our oceans.

10. Look Out for Microbeads

Microbeads seem to be everywhere these days. These tiny spherical plastics are used as scrubbing or exfoliant agents in many “whitening” toothpastes and face washes. While they might seem harmless because of their small size, in reality, they have an enormous impact. A recent study found that a single squeeze of a product that contains microbeads can release 100,000 tiny beads. Once they wash down the drain, they easily pass through water treatment plants and eventually end up in the oceans. Once in the ocean, they are easily ingested by marine animals, exposing them to harmful toxins and compounds. Not to mention, it is estimated that one in every three bites of seafood contain plastic, and even table salt has been found to have trace amounts of plastic – meaning the same beads we wash down the drain are swimming right back to us in the form of food. Yuck!

What’s important to remember is that these easy steps aren’t the one and only way to save our oceans from plastic pollution. They do, however, represent some of the most common ways that plastics can be mismanaged and end up in marine ecosystems, and thus some of the more effective ways we can begin to address marine plastic pollution. No doubt you encounter plastics in your daily life in countless other ways and have infinite opportunities to act in favor of the environment. Why not start making choices today that save our oceans from plastic waste?