France’s Vittel mineral water company introduced the first plastic bottles — for any product — and they hit the market in the late 1960s, only fifty years ago. In the beginning, the plastic bottle was promoted as a means for making products more readily available. The idea proved correct, and other companies followed suit. Business was good, but as distribution increased so did a mountain of bottles with which we’ve been left to sort out.

In total, eight million tons of plastic trash ends up in our world’s oceans every year. Once in the ocean, it can take thousands of years for each individual piece of plastic waste to break down, and when it does, it simply pulls apart into millions of very small fragments of plastic – it never “disappears.” It’s estimated that 80 percent of marine debris comes from land-based sources and 90 percent of that is comprised of plastics, meaning the water bottles we use on land … make up a significant portion of the plastic that ends up in the ocean.

And when it does end up in the ocean, it has an enormous impact on the marine animals who live there. Today, around 700 marine species are in danger of extinction due to plastic pollution either by way of ingestion, entanglement or toxin exposure – and this number is only set to increase as the plastic bottle industry continues to grow.

Given the startling statistics surrounding plastic trash in the ocean, it can be difficult to imagine how we let this become such a monumental problem – but this answer can be found in the fact that once in the ocean, plastic becomes “hidden.” The majority sinks to the sea floor or gets swept up in gyres, it doesn’t just simply float on the top, creating the perfect visual to wake us all up out of out trash apathy. No, our plastic trash gets masked in the vastness of the water’s expanse … but that hardly means that just because we can’t see it all, it doesn’t exist. Nor that it doesn’t have  an impact.

So, next time you go to the store with the intention of buying a plastic water bottle, remember where that bottle will end up. We might think we’re just picking up a quick drink, but in reality, we’re doing is purchasing a piece of plastic trash that will end up immortalized in the ocean. 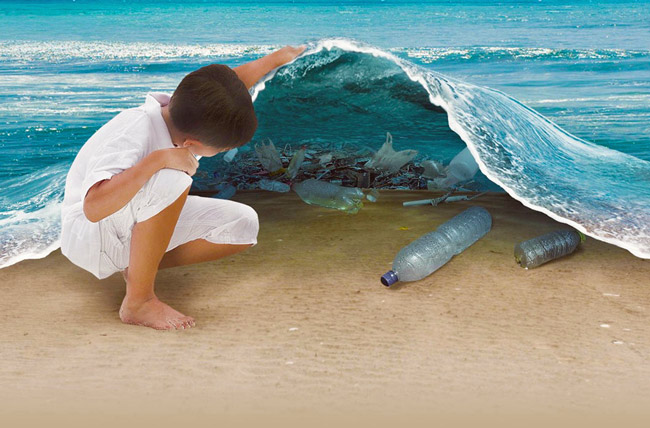 Think of this image the next time you reach for a plastic water bottle – or any other type of disposable plastic for that matter. We might only use it for a few minutes, but it will stay in the oceans for a lifetimes.