Why I Became a Vegan Outreach Activist 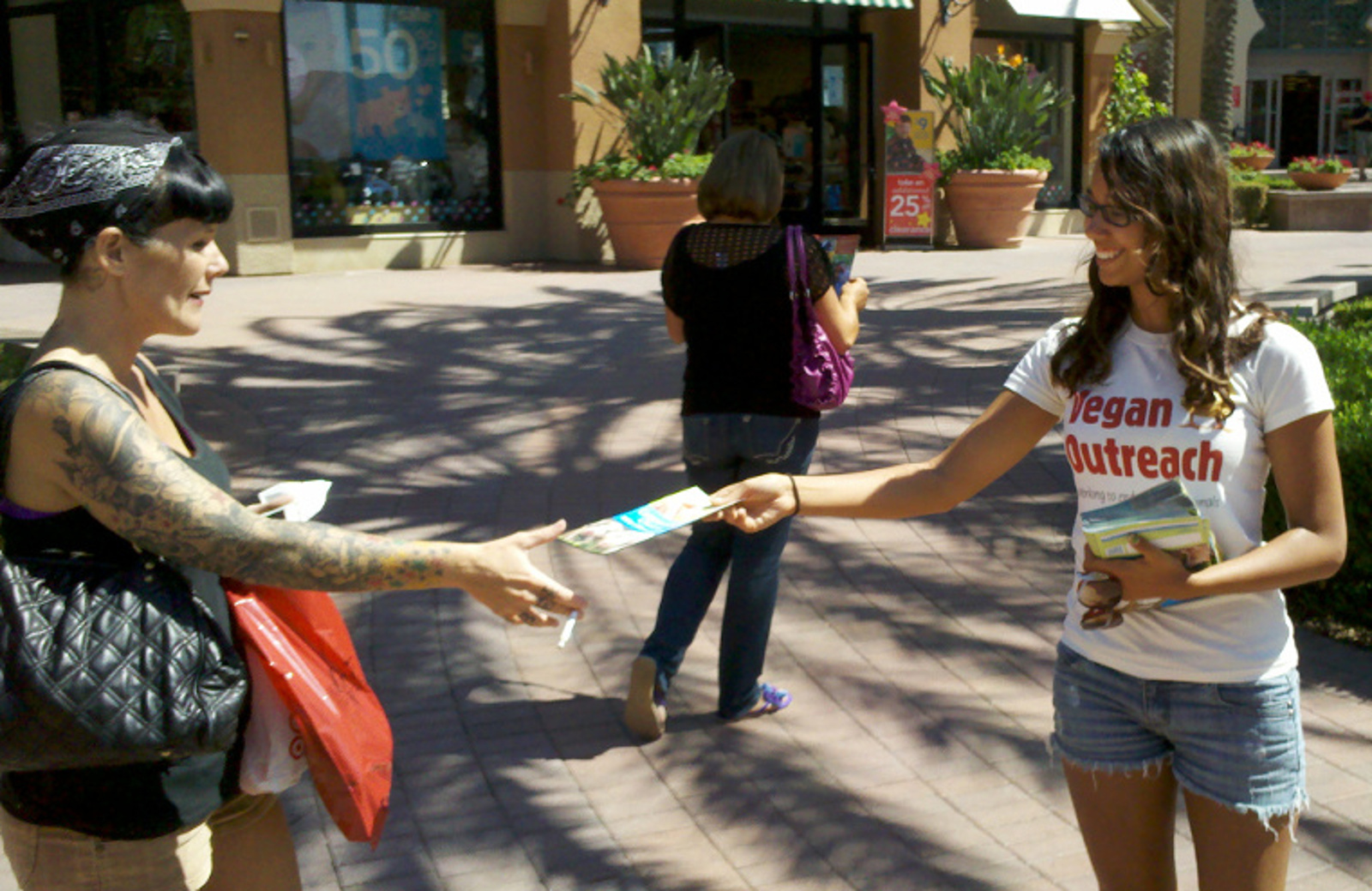 If you have ever been handed a booklet about factory farming on a college campus, busy sidewalk, at a concert venue, or festival, chances are it came from a Vegan Outreach leafleter.

Vegan Outreach is a non-profit animal advocacy organization working to expose and end cruelty to animals through the widespread distribution of our booklets promoting plant-based eating and compassion for animals.

Through Vegan Outreach’s largest campaign, Adopt-A-College, leafleters and volunteers have handed out hundreds of thousands of booklets nationwide. This past Fall 2014 semester, leafleters set the largest record in reaching 996,290 students at 897 schools. And to date Vegan Outreach has distributed over 22,800,000 booklets around the world.

From Advocate to Activist

After watching a documentary that opened my eyes to the suffering of animals used for food on factory farms, I went vegetarian, and 5 years later, vegan. I knew my personal choices were helping animals, but I couldn’t sit back and watch everyone around me unknowingly hurt others. I wanted to do more to get this information out there, so I sought out ways to get active for animals. I knew that if regular everyday people, like myself, learned of the animals’ plight, they too would make a switch to more compassionate choices.

As an eager new animal advocate I experimented with different types of activism: demonstrations, protests, silent vigils, etc. After trying all these different forms of activism I took a step back to think critically about the work I was doing for animals.

Yelling through a bullhorn, voicing my frustration, and joining a group dressed head to toe in black may have felt good, but were these activities the most effective use of my time for animals? I had to remind myself that for every second I was out there, there were chickens standing on wires, crammed in battery cages. There were mother pigs lying on cold concrete floors confined to gestation crates. For the sake of these animals, I wanted to be sure that the activism I was engaged in was going to reduce the greatest amount of cruelty. 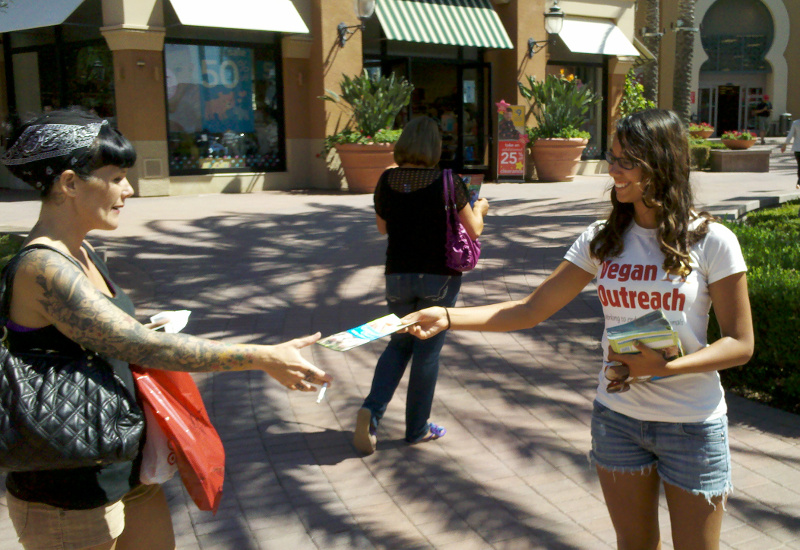 A year into my activism career I was introduced to a different type of activism, leafleting.

The Power of a Leaflet

With limited time and resources, animal advocates ought to focus on how to make the largest impact for animals in the shortest amount of time with the least amount of money. At a cost of about 11 cents per booklet, leafleting is an incredibly effective form of activism dollar per dollar. 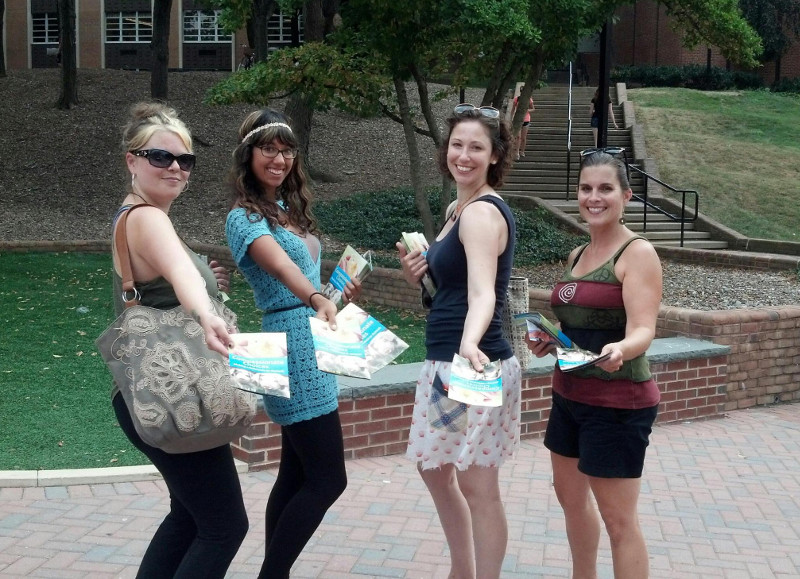 By analyzing our own activism, conducting studies, and focusing on what causes behavioral changes in others, we will save the greatest amount of animals’ lives possible as efficiently as possible. Leafleting on a busy walkway at a college campus, the exit of a concert, or a street corner during a festival, are all great ways to educate a large number of people about modern animal agriculture. Despite the fact that while leafleting one can easily reach hundreds of people in a single hour, many are still skeptical of the effectiveness of distributing booklets. Fortunately, the results are in, and cold hard data shows us that leafleting does work.

According to a study conducted by Farm Sanctuary in 2013, about 1 in every 50 students indicated they became vegetarian or pescatarian after receiving a booklet on a college campus. To keep things at a conservative estimate, let’s decrease the results to 1 in every 100 students who go veg from a booklet. Statistically, in just two hours of standing on a college campus, where you might reach 200 students (oftentimes many more), there are now two new vegetarians! 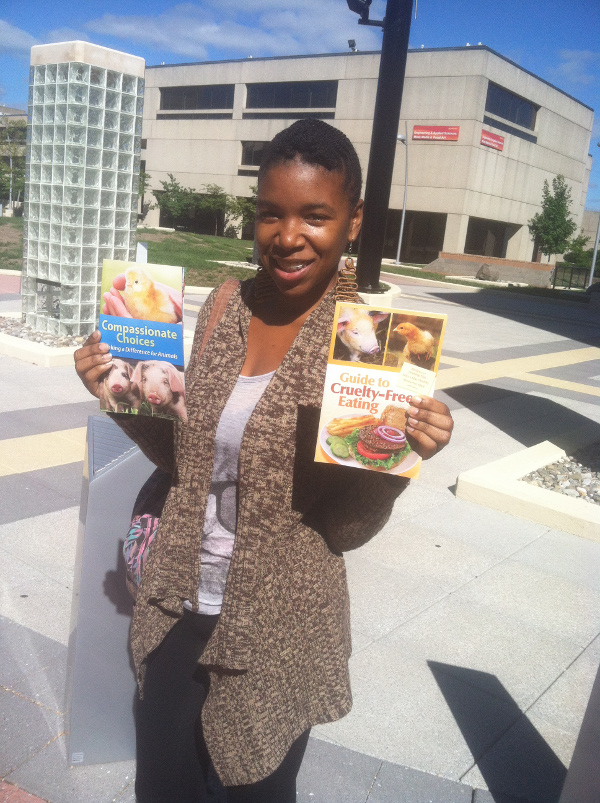 These new vegetarians will now spare hundreds of animals from a lifetime of unnecessary suffering. In terms of the animals themselves, this study has also concluded that for every 2 booklets distributed, 1 animal will be spared. Clearly leafleting works.

For best results, let us consider our target demographic, high school and college students. Those younger than high school age have very little buying power, so meal decisions are left to their parental figures, and those older than college age are often much more set in their ways.

Thus, young adults aged 15-25, are ideal leaflet recipients as they are more inclined to make their own buying decisions and question the status quo. These young adults also have many years of potential vegetarian eating ahead of them, so their potential to reduce cruelty for decades to come is immense.

Making an Impact for Animals

Having worked for other animal advocacy groups, I feel the best use of my limited time and resources is doing grassroots advocacy with Vegan Outreach. I find that by focusing on animal agriculture, which accounts for the vast majority of animal suffering here in the U.S., I am positively impacting as many animals as possible with the limited time that I have.

I am grateful that I can regularly speak one-on-one with the individuals about the plight of farmed animals. I frequently see the direct results of our work as well. Whether it’s running into a vegetarian who cites our literature as their foray into veg eating, overhearing “I’m never eating meat again!” several times each day, or seeing text message requests for our “Guide To Cruelty Free Eating” pour in, I’m constantly reminded that I’m making a difference, and the results keep me motivated to expand my impact for animals even more. 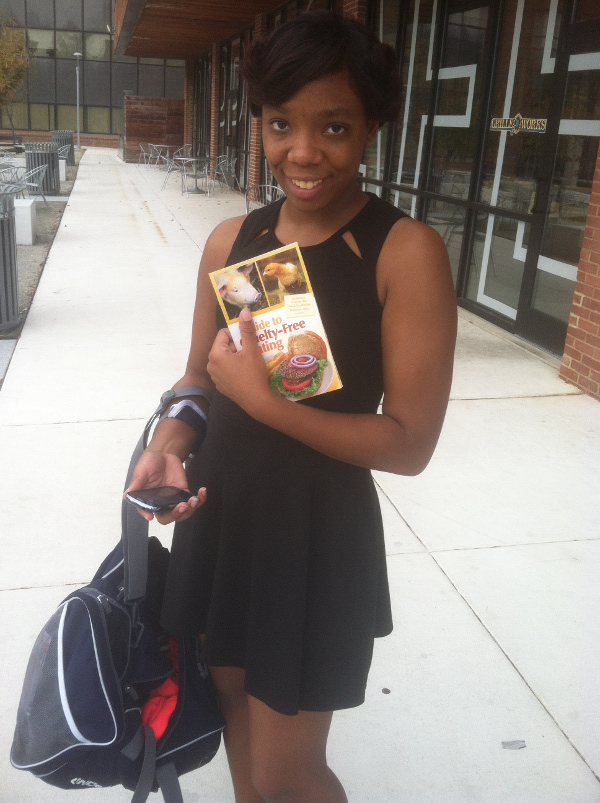 Vegan Outreach has assembled a team of dedicated and passionate activists from across the globe, and our leaflets are now being distributed globally as far away as Australia. Many of our leafleters tour throughout the country, hitting hundreds of schools each semester, reaching hundreds of thousands of young adults nationwide.

Some even cross our borders into Canada and Mexico expanding our outreach outside the U.S. One of Vegan Outreach’s dedicated crew is Midwest Outreach Coordinator, Rachel Shippee, who has reached over 145,000 individuals since 2009. While the traveling coordinators drive hours weekly from city to city across the nation, I am one of the few who are stationary coordinators, as my Delmarva (DE/MD/VA/DC) region is very dense with colleges and universities.

A Day in the Life of  a Vegan Outreach Leafleter

Whether touring or not, typical routines for our leafleters are similar. We wake up early and drive to our schools to catch students arriving for their first class of the day.  Upon arrival, we’ll carry our boxes of Vegan Outreach literature across the campus in search of the ideal leafleting spot, many of which are well known from years past. From there we’ll leaflet throughout the day, stopping every so often to answer questions from curious students. We leaflet through the end of each school day, drive home, answer some emails and submit our daily report, go to sleep and do it all over again the next day.

We follow the Monday through Friday school week, but often times we’ll leaflet more than one university in a day. Depending on the size of each school, we may reach anywhere between 200-5,000 individuals per day. 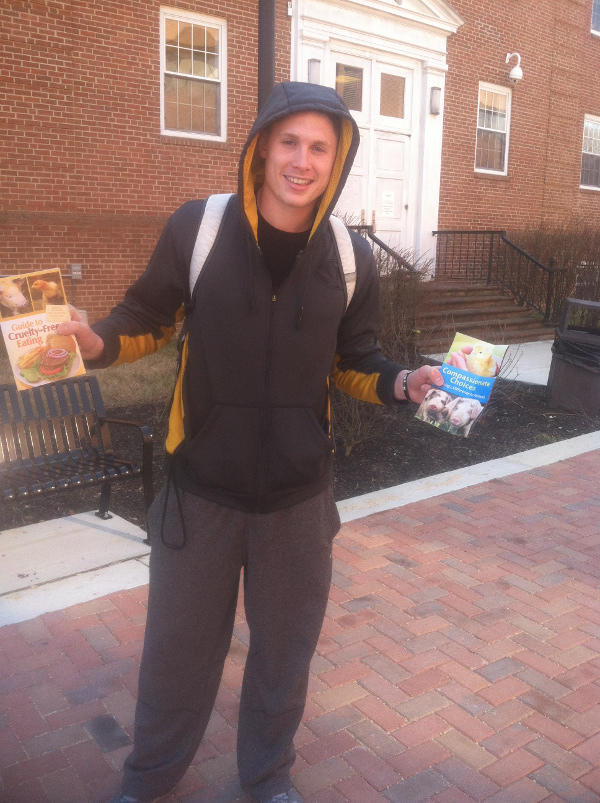 While there are many vegetarians and vegans out there living compassionately many do not actively engage in activism. The demands of careers and families are certainly important and time consuming, but it is important to understand the potential each of us has as a voice for animals.

By simply living and eating veg we personally save approximately 100 land and marine animals each year.

But we must look beyond our own vegetarianism in order to accelerate a positive paradigm shift for farmed animals. Leafleting is as simple as it is effective, anyone can get involved, and it’s a great way to maximize your impact for animals. Dedicating just a mere two hours each month for one year, we could expand our influence to 10, 20, 30… or 100 new veg eaters.

I encourage giving leafleting a shot! For those who are confident and want to get started on your own, check out this video of leafleting tips and tricks created by a well-seasoned leafleter, and feel free to order yourself some booklets online.

For a first-timer, it may be helpful to join an experienced Vegan Outreach leafleter who can ease any hesitation, and demonstrate some helpful techniques. Ready for some effective activism for animals? Shoot an email to [email protected] to get connected with a leafleter near you. Happy Leafleting!