Why Compassion is Key in Helping to Rehabilitate Rescued Horses 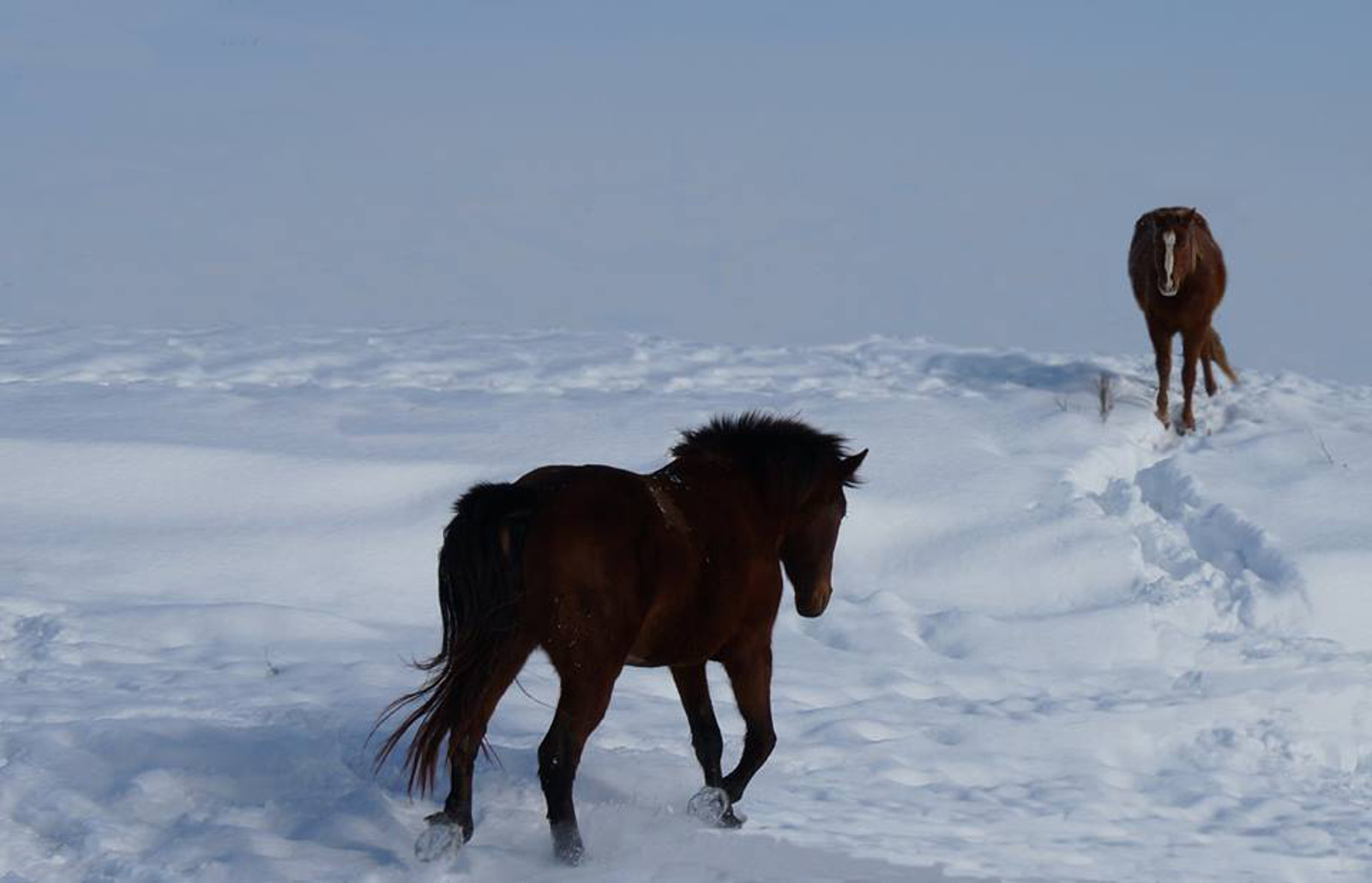 Horses are powerful animals, there is no doubt about that. They require a certain amount of confidence to handle and interact with. Being too complacent in their presence can result in injury or worse. This especially holds true with horses that have been rescued – horses whose past experiences are relatively unknown.

The rehabilitation process is dependent on the training style used. The old school training methods focus on asserting dominance over the horse and sometimes requiring a heavy-hand to ensure absolute control. The goal: to make the horse do exactly what you ask of them, forgetting that they are living, breathing animal with far more emotions than humans give them credit for. Dealing with horses that have past histories of abuse and neglect, does this type of “training” aid in their rehabilitation or inhibit their ability to move past their experiences?

Horses are flight or fight animals, that is, they are largely fear-based. If something is perceived to be a threat, they will simply flee in the opposite direction.  The domestic horse has long complied with the desires of its human companions, whether by choice or by force, in order to avoid conflict.

Being deeply involved in the care of rescued horses, I have found my way into the complicated life of the “horse world.”  It is a highly competitive one filled with individuals that believe they know best and have grown up treating horses as they seem fit.  The belief that the individual is in charge at all times, dominant over the animal, controlling it as if it were a mere machine is a common one.  I have witnessed horses being violently hit, screamed at and forced into submission as part of their ”training” sessions.  There always seems to be an urgency on the part of the human – the horse must be ready to ride in a set number of days.  The term is to “break” a horse – to break its spirit is more appropriate.  Examples of severe methods can be found in all sorts of disciplines including soring, racing and competitive riding.  That is not to say that all horses used for these purposes are mistreated or abused.  For horses that have experienced past torment are best handled with a gentler, more compassionate hand – a new wave of training known as positive reinforcement.

Positive reinforcement is a reward-based system.  The horse is asked (not ordered) to complete a specific task and is rewarded for doing so.  Eventually, after repetition, the horse will associate the given task as a favorable one.  The ultimate goal is to strengthen the bond and relationship between horse and human in order to achieve a high level of trust on both sides.

According to a study that was conducted in 2010 by Sankey et all, “the association of a reward with a learning task in an interactional context, which in this case was the training of young horses by humans, induced positive reactions towards humans during training. It also increased contact and interest, not only just after training but also several months later, despite no further interaction with humans.” Creating a positive learning environment strengthens the horse’s bond with humans, including building new relationships.  It produces a lasting memory in the horse resulting in a more visibility content animal. 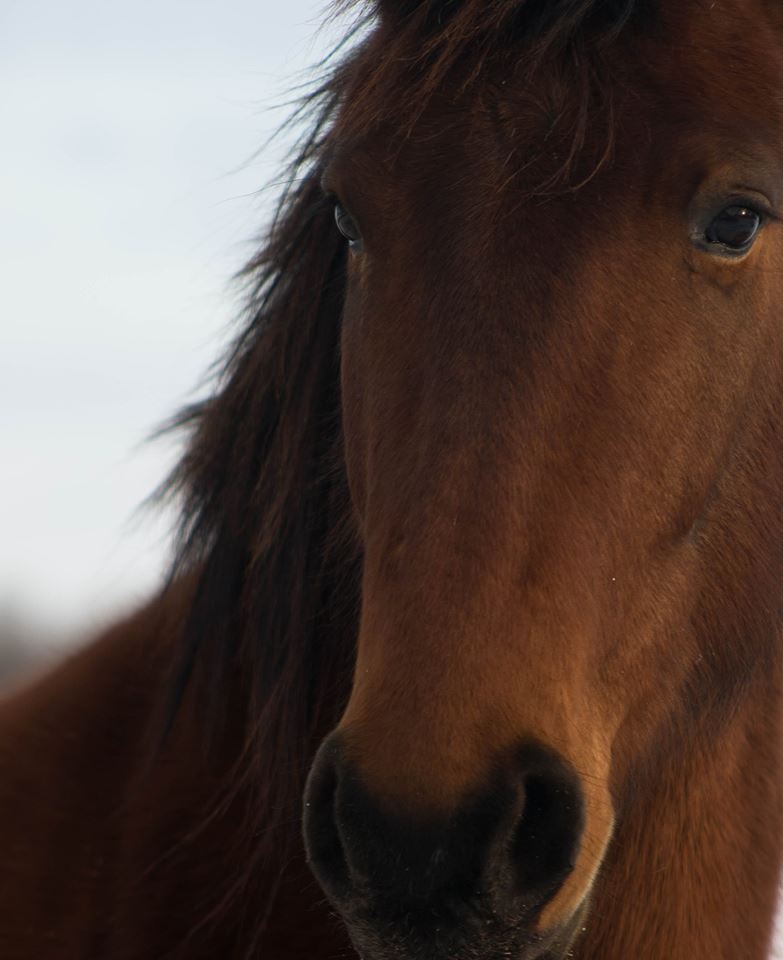 Nikita arrived at the sanctuary after being pulled from the slaughter pipeline.  She was being loaded onto the slaughter-bound trailer when she happened to sneeze.  As it is against regulations to slaughter a sick animal, Nikita was taken off the truck at the last minute.  The plan was to make her healthy and ship her again.  Thankfully, she was spared this fate.

Her past was completely unknown – a mystery. She was young, vibrant and full of life. The first “trainer” to work with Nikita deemed her as “too much horse” and stated that she would always be difficult to control and manage. Believing in old school training methods, this trainer decided that what Nikita needed was to be dominated, to be told what to do, how to behave.  When the physical contact started, that was it.  These methods were not appropriate in rehabilitating a horse that had clearly suffered some type of abuse in her past.  She was terrified.

The second trainer to come in and help with Nikita practiced more of the Natural Horsemanship ways – that is, less aggressive but still asserting dominance over the animal.  Progress was made however it soon became apparent that Nikita was not reacting positively.  She seemed disinterested in the learning process, unwilling to establish any type of bond with the trainer.  A third method was then introduced involving positive reinforcement.

The tasks are simple to begin with: Nikita is asked to back up, move forward and receives a small treat as a reward.  She is beginning to associate learning with positive interactions.  She is an extremely curious horse and very quick to catch on to new challenges.  Her demeanor has changed drastically over the last few months.  It is as though she looks forward to her sessions.  She waits patiently at the gate when it is training time isn’t forced to do anything she does not want to do and there is no strict time frame. Patience is key and so important to helping a horse recover from past abuses.  Nikita reacts to everyone the same way – she is friendly and approachable.  There are no specific plans to make Nikita rideable.  Working with her on a daily basis is a means of establishing trust and strengthen bonds.  It is amazing feeling to connect with a horse on a balanced playing field in a stress-free environment.

In Nikita’s life, there are no leaders, just equals.  This is particularly evident in how she interacts with her fellow herd mates.  There is no “lead” horse in the group.  They have learned to interact in a positive way and have formed bonds that will likely last a life time.

There are many ways to train a horse and many people with opinions on what is right and wrong.  Using violence and strict methods to enforce dominance is unacceptable and crosses the line into abuse.  There seems to be a shift towards positive reinforcement and creating bonds by mutual interaction.  More and more people are coming to the realization that you can do far more with your horse than simply ride.  Horses are amazing creatures, almost spiritual in nature and definitely therapeutic and having a little patience goes a long way.  Take the time to build a solid relationship with your horse.  We are forever learning from our horses as they are learning from us.

“For to be free is not merely to cast off one’s chains, but to live in a way that respects and enhances the freedom of others.” – Nelson Mandela