What Has Our Interference Cost Dolphins? 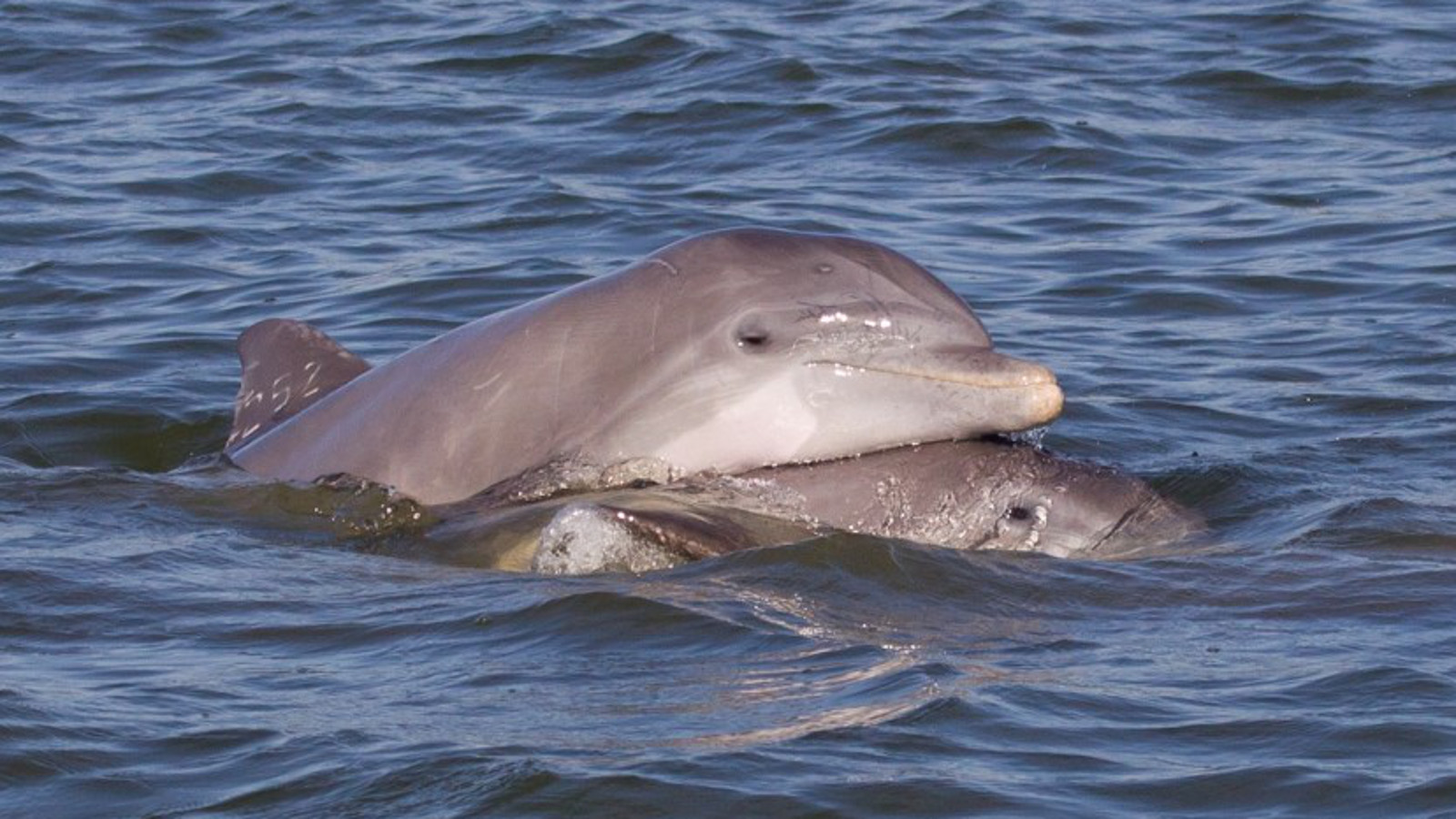 Reprinted with permission from DolphinProject.com

Have you noticed the ads on television and the internet, filled with happy dolphins? Yes, those ads, where bottlenose dolphins delight in performing and orcas cruise leisurely through plexiglass tanks. There are others too: the swim-with programs, the swim-on programs where you can take hold of a dolphin’s dorsal fin and get towed through the water, and even feed the dolphins programs, where you can toss a dead fish into an animal’s mouth. No matter the marine park or aquarium, the messaging remains the same: it’s a dangerous world out there, and honestly the dolphins are better off under the care of trained staff.

Rather than wasting time and money supporting an industry with direct ties to the Taiji drive fisheries, where dolphins are slaughtered or selected for a dead-end existence in captivity, why not engage in cruelty-free activities? I’m a longtime fan of watching whales and dolphins in their natural environments, where both species are free to come and go as they please. But, if this option isn’t possible, you can view the world’s first wild dolphin immersive virtual reality experience from home. It’s like swimming with dolphins from the comfort of your couch.

The thing I noticed, after watching wild dolphins off the coast of Key West, was their tight, social bonds. Juveniles would brush up against their mothers, and all members of the pod swam close together.

In Taiji, Japan, these social bonds are callously disregarded, with pods decimated on an oft-daily basis, between the months of September and March of each year. Adult members are either killed for meat or selected for captivity, while babies and juveniles are routinely witnessed being dumped back at sea, their chances of survival, minimal at best. On a Live Stream captured by Dolphin Project Cove Monitors, a baby bottlenose dolphin was seen rubbing against an adult, presumably its mother, seeking comfort from the terror of being brutally driven into The Cove. 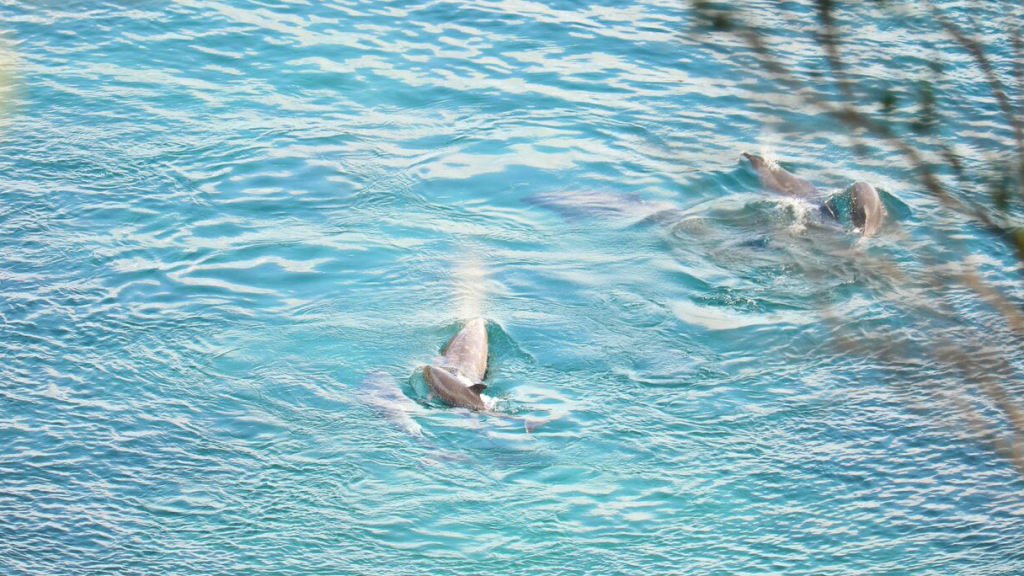 Aside from the meat itself being unfit for both human and animal consumption, due to high levels of mercury found in dolphins caught around the waters of Taiji, one must question what sense of tradition the Taiji fishermen believe they are upholding, while systematically destroying the culture of other species? The Japanese themselves are pushing back against this practice, with the first Japanese activist standing in protest at The Cove, back in 2013.

“It’s not about tradition or culture. It’s all about profit and greed, powered by the engine of the captivity industry. The real money is made in the trade of dolphins to aquariums and marine parks. Taiji is ground zero for the largest trafficking of dolphins in the world,” said Ric O’Barry, Founder and Director of the Dolphin Project.

Watching the animals participate in “reward-based” behavior (that’s code-speak for performing for food), it’s obvious they are suffering, their existence, abhorrent. On one hand, you’re told by enthusiastic marine mammal trainers that dolphins can swim 50-100 miles a day in the open ocean in their hunts for fish, while on the other hand, what you’re seeing is an entirely different existence, where, day and night, dolphins circle the periphery of the tank, driven to either depression, aggression, or both. Wounds and growths can often be observed on the skin of the animals, as documented in this photograph of a captive pilot whale, taken at the Taiji Whale Museum. 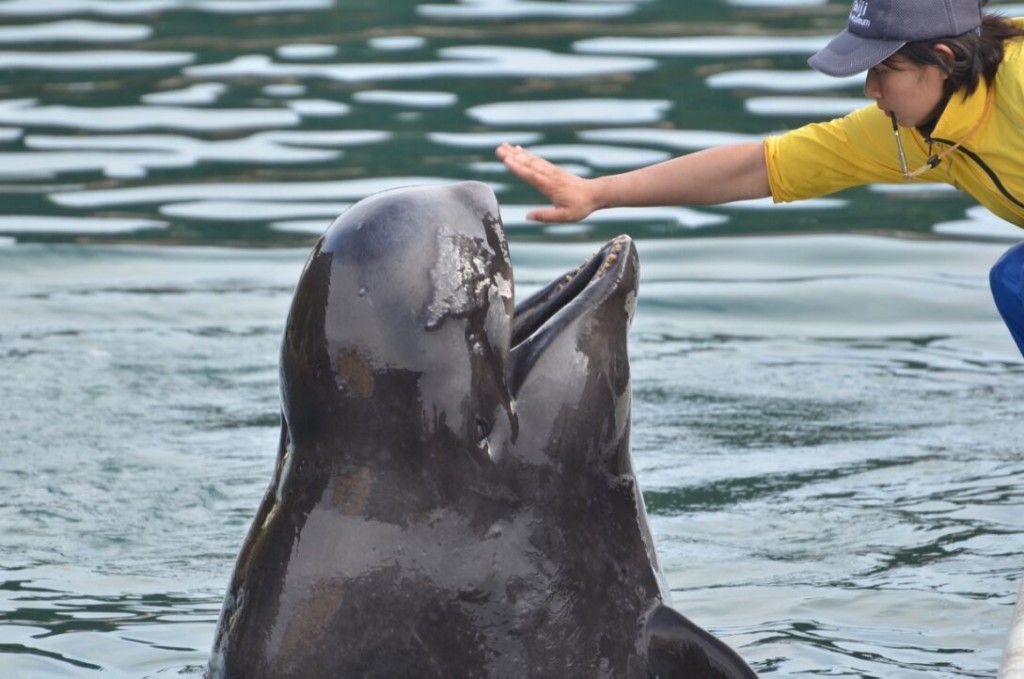 It’s an issue of quality versus quantity, and there is absolutely no quality to these animals’ lives, regardless of their individual life spans reached in whatever facility they have been shipped to.

With such films as A Fall From Freedom, The Cove, Blackfish and the mini-series, Blood Dolphins, the tide is turning – literally – and we are the collective reason. I have always believed that education equals empowerment. The more people educate themselves on these issues and have access to responsible and balanced information, the more they can make their own decisions and choices as to what they support, or not. Dolphin Project’s study guides are an excellent starting point for all ages, to help educate ourselves and then, others.

Angel is an albino bottlenose dolphin captured during one of Taiji’s drives in January of 2014. At the time she was just a calf, now, two years later, she continues to be displayed at the Taiji Whale Museum, along with other tank mates. She is curious, often responding to the presence of our Cove Monitors, yet with nothing to do, and, with the smell of chlorine strong in the building, swims with her eyes closed for much of the time. 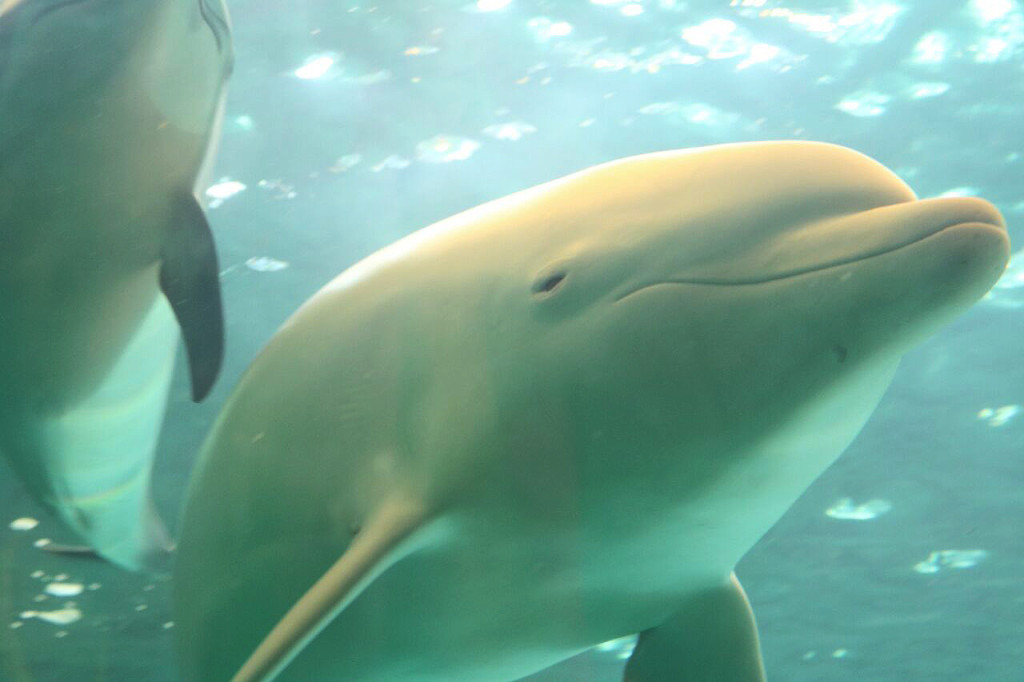 According to the dictionary, an angel is “an attendant or guardian spirit.” Without attaching any religious significance, this seems fitting for dolphins and other whales, whom, throughout history, have been documented rescuing humans and acting as our allies. Yet they expect nothing in return. For beings who have existed on our planet in one form or another for over 50 million years, our treatment of them is careless, selfish, and by some, unimaginably cruel. It’s time for us to embrace gratitude, kindness, compassion, and respect – all virtues which are attributed to our own species, deserved or not – and apply them in our interactions with theirs.

To me, these are the qualities traditions are made of, passed down from one generation to the next. Dolphins have had millions of years to perfect themselves, and adapt to an ever-changing world. It would seem prudent, ethical, for us to step aside and allow them to continue on their evolutionary path.

What can you do to act as an advocate for dolphins? You can Take the Pledge to NOT Buy a Ticket to a Dolphin Show. Then you can tell your family, friends and colleagues to do the same. Consider this simple, but profound act a contract with yourself to never support the mistreatment of these marine mammals. For other ways to help, please click here.