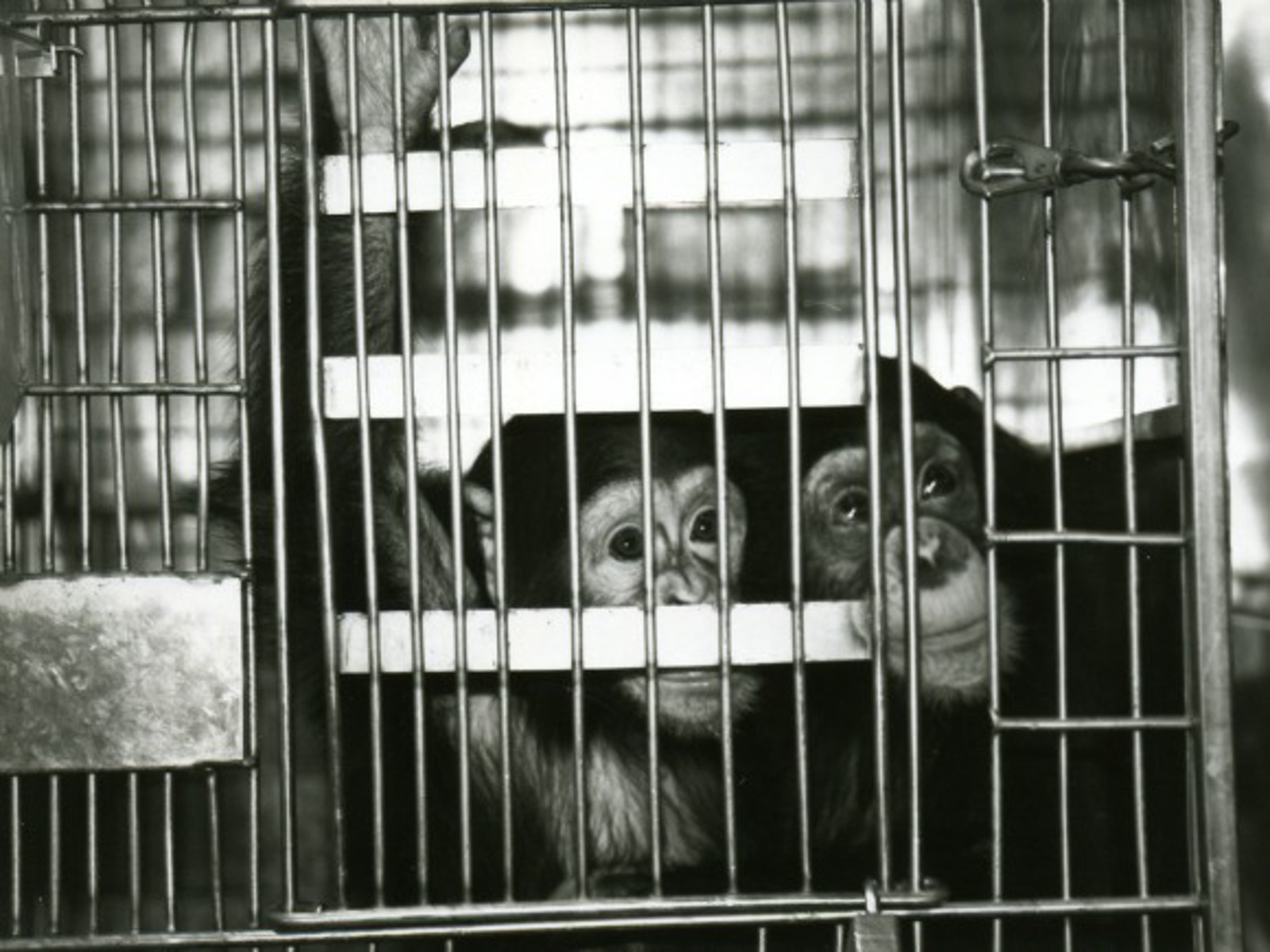 Over a decade ago, a friend had invited me to a graduate student event at New York University where he was enrolled. As an ice-breaker exercise, we were all given name tags and asked to write a topic of our interest/expertise on the bottom. “Ask me about _____.” Having just returned from volunteering at a wildlife sanctuary in Cameroon, I wrote “chimps” on my tag. During the course of the evening, a silver haired gentleman in the upper echelons of the university’s administration squinted down to read my sticker and grunted. “Chimps? You’re not one of those animal rights activists are you?”

He proceeded to tell me how a few years prior, these “crazy” activists took hold of the university president’s office. What he was referring to was when in November of 1997, members of NYU’s Students for Education and Animal Liberation occupied then NYU President L. Jay Oliva’s office, demanding that the remaining chimpanzees of NYU’s Laboratory of Experimental Medicine and Surgery in Primates (LEMSIP) be retired to sanctuaries rather than transferred to another laboratory notorious for its animal welfare violations. After 20 hours of occupation, NYU agreed to the protesters request to retire the remaining chimpanzees

While the silver haired gentleman was dismissive of these activists the act of placing their bodies in the highest office on campus, revealed truths about what was going on hidden behind closed doors.

Today, it is no longer just the “crazy” activists advocating for the retirement and phasing out chimpanzees from biomedical research, but also federal agencies within the U.S. government.

NIH to Retire the Majority of Research Chimps

In June of 2013, the National Institutes of Health issued a statement that it would “substantially reduce the use of chimpanzees in NIH-funded biomedical research and designate for retirement most of the chimpanzees it currently owns or support.”

The decision came out of a multi-year process, that was initiated in response to public outcry over NIH’s announcement in 2010, that they would be transferring of chimpanzees from Alamogordo Primate Facility in New Mexico, which held but did not conduct research on chimpanzees, to Southwest National Primate Research Center, where they would be integrated with a chimpanzee colony available for research. In response, the Institute of Medicine of the National Academies of Sciences convened a group of experts and hosted a public process on the scientific necessity of using chimpanzees in research.

In December 2011, the IOM report concluded that chimpanzees were, for the most part, no longer necessary, and where they were needed in research, they should be housed in “ethologically appropriate” conditions. The director of NIH then charged a working group to make recommendations on how IOM principles should be implemented.

While these actions by NIH are promising for animal advocates, there are several limitations. To be clear, this is not a ban on chimp research. NIH still intends to maintain a small population of chimpanzees (roughly 50) for future research. They are to be housed in conditions where they can exhibit their full range of chimpanzee behaviors, but NIH hasn’t accepted the space recommendation of 1000 square foot per chimpanzee, and it is yet to be determined how any laboratory can be ethologically appropriate. For those not slated for further research, retirement is still “contingent upon resources and space availability in the sanctuary system.”

Captive Chimpanzees Are Endangered Too

Wild chimpanzees are protected under the Endangered Species Act (ESA), but historically captive chimpanzees in the U.S. have not been afforded the same protection. The United States Fish and Wildlife Service, which enforces the ESA, received a petition to list all chimpanzees as endangered. After 12 months of deliberating on this issue, USFWS announced in June 2013 that “ the ESA does not allow for captive-held animals to be assigned a separate legal status from their wild counterparts,” and have proposed to list captive chimpanzees as endangered too.

What does this mean for the use of chimpanzees in biomedical research? Now researchers would have to apply for a permit for any activity that could result in a “taking” (bureaucratese for harming) of an endangered species. Vivisection clearly falls within this category, and this new legal status for captive chimpanzees would add more scrutiny and regulation on future research.

IOM committee argued that it is chimpanzees’ genetic closeness to human beings that “demand a greater justification for their use in research than is the case with other animals.” These ethical concerns, they continued “are not as prominent when considering the use of other species in research.”

Why not? Shouldn’t the necessity of all animal research also be given scientific and moral scrutiny by our federal government? While chimpanzee research seems to be on the decline, research on monkeys and smaller animals heavily persists. Shouldn’t discussions of what is and isn’t “ethologically appropriate,” also occur for rats and mice, the vast majority of animals used in research who are also currently excluded from basic protections under the Animal Welfare Act? Shouldn’t we justify our “takings” of all research animals?

Animal research is ethically troubling, and perhaps that is why many labs keep their animal experiments hidden out of site. In the fall of 2012, it was not a student occupation, but a hurricane, that exposed this underground reality at NYU, when thousands of lab rats and mice died in the flooding of the university’s basements, during Hurricane Sandy.

We must ask is it ethical to only grant ethical consideration to the animals closest to humans, or protect a species only after we’ve driven them to the brink of extinction? Now that we’ve started this conversation on science and ethics with chimpanzees, let’s take it a step further.