By The Humane Society of the United States 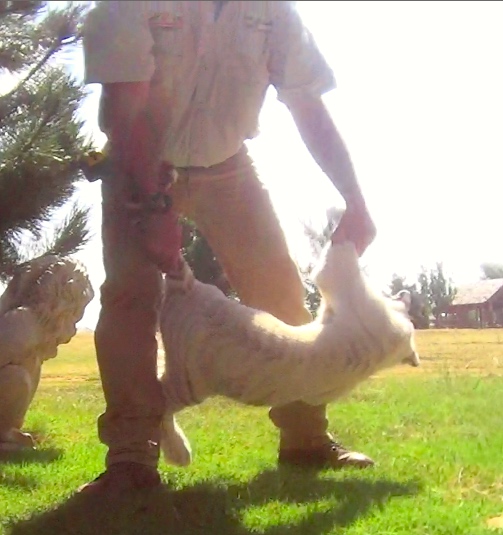 While Joseph Maldonado-Passage also known as “Joe Exotic“, Kevin “Doc” Antle and others featured in the Netflix series “Tiger King” are now household names, the Humane Society of the United States has been working for years to stop the horrific treatment of animals at these – and many other similarly cruel – operations. In 2011 an HSUS investigator worked undercover at Joe Exotic’s G.W. Exotics for 100 days. In 2014 the HSUS investigated two other roadside zoos and made an undercover visit to Antle’s facility, Myrtle Beach Safari.

Tiger King barely scratches the surface of the suffering these animals endure and the extensive networks of cruelty involved in breeding and selling by Antle and Joe Exotic to other wildlife menageries. The HSUS is publicly releasing additional undercover footage for the first time, see below:

Kitty Block, president and CEO of the Humane Society of the United States and the CEO of Humane Society International, said, “Facilities like Joe Exotic’s and Doc Antle’s masquerade as rescue or conservation operations, but in fact they breed tigers and subject the cubs, who are torn from their mothers immediately after birth, to stress and abuse. After a few months, when the cubs are too large for close encounters with the public and the opportunity for profit is over, the cubs are caged, sold into the pet trade or die. This cycle of breeding for temporary use leads to a surplus of unwanted animals who languish in horrible conditions. This is not conservation. No animal deserves this life.”

Joe Exotic and Antle have been the country’s most prolific big cat breeders, producing untold numbers of tigers, lions, and hybrids for their own cub handling profits as well as for other exhibitors. The HSUS’ 2014 undercover investigations at two facilities with cub handling programs reveal the extent of Antle’s far-reaching network. The facilities are Tiger Safari in Tuttle, Oklahoma, and Natural Bridge Zoo in Natural Bridge, Virginia.

The investigator documented the treatment of Maximus, a cub born at Tiger Safari to a tiger who had been acquired from Antle. Max’s three littermates were immediately sent to Antle while Max remained at Tiger Safari where he was used for public handling from three weeks to approximately five months of age. He was then caged and died about one year later. Sarabi arrived at Tiger Safari at just three weeks of age from Antle’s facility. She was immediately subjected to extensive handling by the paying public despite the fact that she was an infant and was infected with ringworm. She was also consigned to a cage once Tiger Safari was done using her and was just over a year old when she was found dead. Daxx and Deja were born at Natural Bridge Zoo to a tiger who belonged to Antle. The other three cubs in their litter were sent to Antle while Daxx and Deja remained at Natural Bridge for photo ops with paying customers. At approximately five months of age, Daxx and Deja were also taken to Antle’s facility.

Once big cats grow too large for cub handling, Antle dumps many at other substandard facilities and/or warehouses them at his own location in Myrtle Beach, South Carolina. During a behind-the-scenes tour at Antle’s facility, the HSUS investigator saw dozens of adult tigers kept in cramped, reconfigured horse stalls with cement floors. A double-wide stall contained 13 two-year-old tigers, while the rest of the stalls each contained one to four mature tigers. He also said that he normally euthanizes white tigers who are born cross-eyed. Crossed eyes is a common hereditary defect in white tigers, who must be extensively inbred to produce white fur, blue eyes, and chocolate stripes.

In 2016, Antle attempted to expand his network internationally by applying for a permit to export 18 tigers to Mexico for filming and a breeding operation. The HSUS and Humane Society International filed successful legal comments in opposition, asserting to U.S. Fish & Wildlife Service that the proposal would violate federal law.

In addition, Joe Exotic and Antle’s breeding trail extends to the circus. Both have provided tigers to Ryan Easley’s ShowMe Tigers, a traveling U.S. circus act. A 2017 HSUS undercover investigation found that the eight tigers in Easley’s act were trained and handled through the violent use of whips and sticks, forced to perform tricks that could lead to physical ailments, fed inappropriate diets, and kept in cramped transport cages with no room to stretch or exercise. Joe Exotic sent two tigers to Easley in 2012 and, despite HSUS’ video showing cruel treatment, Antle sent three tigers to Easley in 2018 and 2019.

Fortunately, there is legislation before Congress to protect these animals. The Big Cat Public Safety Act, H.R. 1380, passed the House Natural Resources Committee in September 2019 and is expected to be voted on by the House of Representatives in the coming months. A companion bill, S. 2561, has been introduced to the U.S. Senate. The bill prohibits cub-petting activities which will help to prevent abuse and the huge population of captive big cats that the activities create. It also prohibits individuals from keeping big cats as pets, which is important to protect the welfare of these animals as well as to ensure public safety.

“It shouldn’t take undercover footage of the abysmal conditions of these majestic tigers and their cubs to highlight why private possession of big cats and cub petting is abject animal cruelty,” said Sara Amundson, president of the Humane Society Legislative Fund. “The current patchwork of state laws cannot fully address the problem perpetuated by fake ‘sanctuaries’ making money off the backs of endangered and threatened species. Please join us in asking Congress to pass the bipartisan Big Cat Public Safety Act to put the antics of Joe Exotic and Doc Antle where they belong–in the distant past.”

Whether it is swimming with dolphins, petting a tiger, snake charmers or dancing bears there is a tremendous amount of torture and suffering (starvation, drugs, beating, bullhooks, whips, tight collars, muzzles, electric prods, etc) these beautiful species have to go through to be forced to interact with us. ⁣⁣⁣⁣⁣

Below are some additional articles in One Green Planet that show first hand how tigers are exploited and abused for entertainment: