Empty The Tanks! Stories of 5 Orcas Still in Captivity 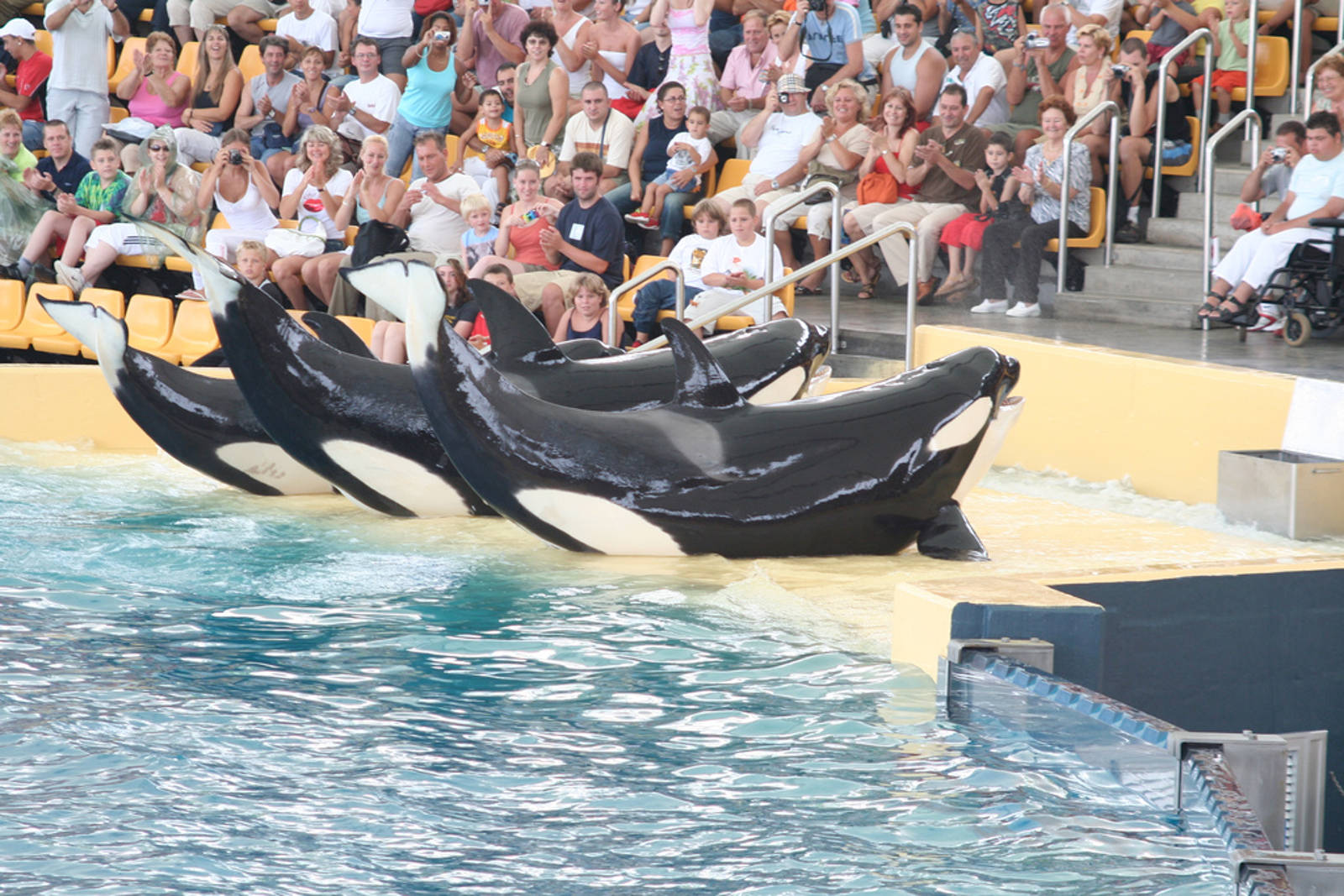 As cruel whale and dolphin hunts continue unabated, trying to make the point that orcas, dolphins, and all other marine animals, do not belong in captivity, can sometimes feel like banging our heads against a brick wall. It seems that the people responsible for these hunts refuse to view cetaceans in any other light than as useless objects, to be sold for profit and slaughtered for their meat.

The best way for us to move past the idea that these beautiful animals are commodities is to familiarize ourselves with their stories, and understand that they, just like humans, are complex beings with fears, hopes, and dreams of their own. With this in mind, let’s hear the stories of five orcas who have lived in captivity for most of their lives.

Let’s start with the most famous captive orca of them all: Tilikum. This 12,000 pound male has acquired a certain level of infamy because of his violent attacks on humans and other orcas, the most well-known incident being the drowning of SeaWorld trainer Dawn Brancheau, which was explored in “Blackfish.”

Tilikum was first captured off the coast of Iceland in 1983, at the tender age of two. He was then held in a cement holding tank in the Hafnarfjörður Marine Zoo in Reykjavik, Iceland, for almost a year, before being transferred to a slightly larger pool in Sealand of the Pacific in British Columbia, Canada. Here, he was trained to perform tricks by the use of food deprivation, and endured frequent attacks by his two female tank mates, Haida and Nootka.

On February 21, 1991, Sealand trainer Keltie Byrne fell into the pool. She was pulled to the bottom by Tilikum before being attacked by all three orcas, and ultimately drowned. After this horrific incident, Sealand closed down for good and put all of its animals up for sale.

When SeaWorld caught wind of the fact that the 12,000 pound Tilikum – the largest orca in captivity – was on the market, they quickly snapped him up as an “asset” for their breeding program. As a result, 54 percent of SeaWorld’s orcas now have Tilikum’s genes.

Most of Tilikum’s teeth have been worn down to stumps (due to his abnormal habit of gnawing on the bars of his enclosure) and his dorsal fin has also completely collapsed – a common phenomenon amongst captive male orcas. Marine advocacy group The Orca Project says that an orca’s dorsal fin “has less than a 1% collapse rate in the wild because the oceanic pressure of the water keeps them erect, compared to the almost 100% dorsal fin collapse rate when kept in a tank.”

The frustration of captivity has led Tilikum to be connected with two other deaths: that of Daniel P. Dukes in 1999 and Brancheau in 2010. And yet, SeaWorld’s Vice President of Communications, Fred Jacobs, has continued to insist that Tilikum is “doing well” and is provided with adequate stimulation.

As we reported in January, a recent campaign has been started by the Blue Freedom Foundation, aimed at his permanent release. Called “Free Tilly Now,” the campaign has one, simple aim: to gather one million signatures via an online petition on Change.org, and send “a clear, responsible message to the leadership at SeaWorld and the Blackstone Group (the owner of SeaWorld) – a message that cries out for the release of Tilikum to a seapen for rehab.”

Katina, along with another female orca named Kasatka, was first captured off the coast of Skardsfjara in Iceland in 1978. It is estimated that she was three years old at the time.

Katina’s other children include Katerina, Taku, Unna, Ikaika, Nalani (whose father is Taku), and most recently, Makaio, who was born on Oct. 9, 2010, just days after her eldest daughter had passed away. Katerina and Taku have also died.

Katina’s teeth, just like those of Tilikum, have been progressively worn down as a result of her stress-induced gnawing on tank rails.

Female orca Corky has what “Death at SeaWorld” author David Kirby describes as the “dubious distinction” of being the longest-held captive orca in history. Captured off the coast of British Columbia at the age of four, she has now been held prisoner for over 44 years.

From the time of Corky’s capture until 1987, she was held at Marineland Palos Verdes near Los Angeles. On Feb. 28, 1977, she gave birth to her first calf – a male – who lived for just sixteen days. A further six pregnancies also ended tragically, and the longest any of her calves has survived is 46 days.

She stopped ovulating at the young age of 21 – an abnormal development. According to Whale and Dolphin Conservation (WDC),  “In the wild, Corky would probably have had several calves by now. A female orca in the wild might look forward to about twenty-five reproductive years and have perhaps four to six offspring.”

After Marineland Palos Verdes was bought by SeaWorld’s corporate owner, Harcourt Brace Jovanovich, Corky was transferred to SeaWorld in San Diego, and became the park’s star performer. During her time in captivity, she has experienced a variety of social difficulties, most memorably an altercation with another female orca, Kandu V, in August 1989 (which sadly resulted in the death of Kandu).

Like Tilikum and Katina, most of Corky’s teeth are worn down, and she is also blind in one eye.

From photographs taken at the scene of her capture, and knowledge about the behavior and composition of killer whale families, researchers have been able to identify who her mother is, and who her pod members are. Sadly, her mother, Stripe, died in 2000, without ever seeing Corky again.

However, the fact that her pod members have been identified means that she could be a candidate for successful release back into the wild – if SeaWorld ever agree to give her up, that is. WDC says that Corky still remembers her family, as she “visibly shook and vocalized poignantly when a tape recording of her family’s calls were played to her in 1993.”

Morgan, a young female orca, was just captured in 2010, but as David Kirby puts it, “Her life at Loro Parque has been anything but safe.”

Dr. Ingrid Visser, of the Free Morgan Foundation and New Zealand’s Orca Research Trust, says that Morgan has been “brutally and continually attacked, and is subjected to excessive sexual pressure from a male orca whom she is often locked into the same tank with.” While observing her over a period of eight days, Visser claims that she witnessed no less than 91 “aggression events,” in which she “was attacked, on average, more than once an hour.”

Shortly after Morgan’s capture, the Free Morgan Foundation warned officials of the Netherlands court and the Dolfinarium Harderwijk aquarium that placing her into the same tank as the orcas of Loro Parque – all of whom have displayed serious social and psychological issues – would lead to her inevitable harassment and abuse. Sadly, they did not listen, and Morgan is now suffering the effects of this greedy decision.

The Foundation also disapproves of Morgan’s diet of dead fish, saying, “When an animal is truly being rehabilitated for release, they are given food that is as natural as possible. Also, that food is preferably given with little if any human intervention. The Dolfinarium Harderwijk, within hours of putting Morgan in their tank, only ever gave her dead fish, by hand. Loro Parque continues with this practice, encouraging Morgan to beg.”

They have recently launched a court appeal to fight for Morgans’ release, funded by U.S. philanthropist Sam Simon – and the verdict is expected on Feb. 19! Fingers crossed, Green Monsters.

Bull orca Kshamenk was found stranded off the Argentine coast in 1992. While Mundo Marino, a theme park outside Buenos Aires, have always maintained that they “rescued” him from his stranded state, animal activist groups say that he was purposefully forced into stranding.

The Free Willy-Keiko Foundation and Earth Island Institute, in particular, have slammed Mundo Marino’s excuses by saying, “Four orcas (including Kshamenk) were forced ashore by Mundo Marino boats pulling a net between them. One was released because he was too big to be handled by the capture crew. One died on the way to Mundo Marino, and one beat himself to death on the concrete walls when he was placed in the tank. The only survivor in captivity of the four orcas is Kshamenk.”

His former tank mate, a female orca named Belen, died in 2000, and the Free Willy-Keiko Foundation states that as a result of all this trauma, Kshamenk is now “uncooperative, sexually frustrated, angry, and depressed.”

In fact, he is so desperate for companionship that he has reportedly attempted to mate with a female dolphin tank mate named Floppy. Sam Simon (the same philanthropist who funded Morgans’ release  campaign, above) has described Kshamenk as the “most abused orca in the world.”

The Free Willy-Keiko Foundation believes that Kshamenk could be a successful candidate for release because he is a transient, rather than a resident orca – meaning that he could adapt well to pods other than his original family pod. They urge supporters of their campaign to release him to email Nestor Kirchner, president of Argentina, at [email protected] A sample message is outlined here (bottom of the page).

If you want to take another action that will help free Kshamenk, add your name to this online petition from The Petition Site, which has garnered over 11,000 signatures to date.