EXPOSED! Ringling Brothers and Barnam and Bailey Circus: The Cruelest Show on Earth! 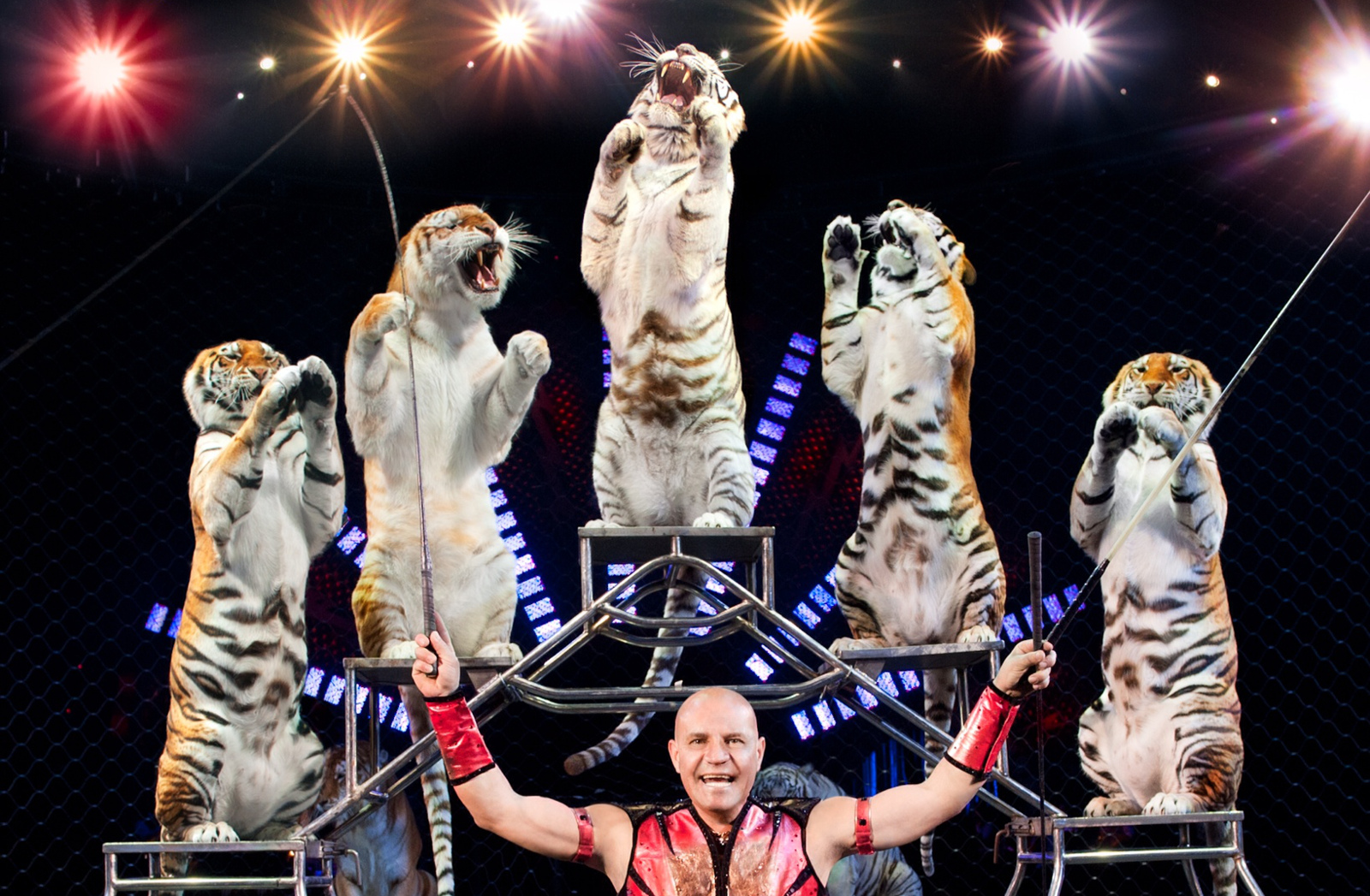 There is nothing more exciting to a young child than the prospect of going to see the elephants and tigers when the circus comes into town. Synonymous with this excitement to see real-life wild animals is the Ringling Brothers and Barnam and Bailey circus. Joining all the exotic species that are so fascinating to children – and adults alike – under a single tent, these shows have become a veritable staple when it comes to good-time family entertainment.

People enjoy attending the circus because it is an opportunity for them to escape real life and enter into a magical world where wild animals dance and perform in ways you could only ever see in cartoons. There is no denying that the experience of watching a circus act is an otherworldly experience, but what happens when you pull back the curtain on this fantastical spectacle? You see it for the reality it is. And the reality is not pretty.

While all circus animals suffer abuse, the animals that belong to the Ringling Brothers and Barnam and Bailey troupe are especially mistreated. The blatant violations of the Animal Welfare Act and deep history of cruelty and misconduct all to rarely come to mind when audiences hear the name “Ringling Brothers and Barnam and Bailey,” so let’s for a moment, pull back the curtain and expose what really goes on under the big top.

1. Where do Ringling Brothers Animals Come From? 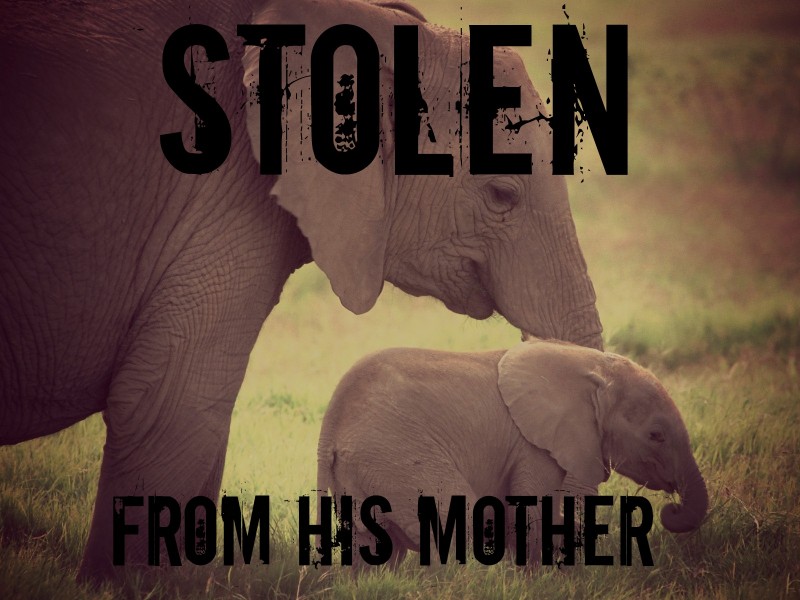 While it may appear that the animals that perform in Ringling Brothers and Barnam and Bailey shows are special breeds that were simply born to thrive in the spotlight and eat up applause, in reality they are not. It is estimated that about 50 percent of the Asian elephants owned by Ringling Brothers and Barnam and Bailey were captured from the wild. 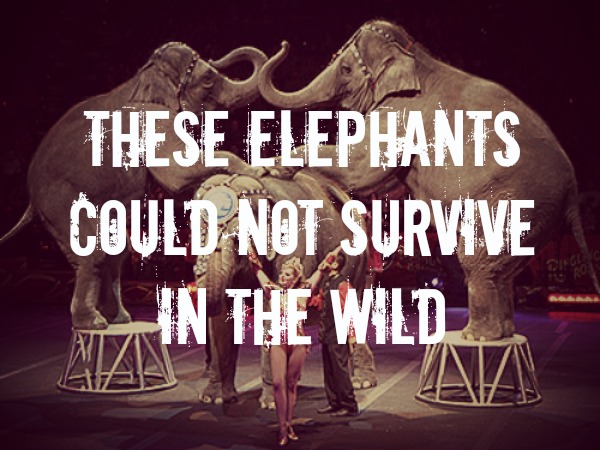 The Asian elephant is an endangered species, and while Ringling Brothers and Barnam and Bailey asserts that is runs a comprehensive “conservation” program, not a single elephant born into the circus has ever been released back into the wild … we imagine an elephant that only knows how to balance itself on a bucket would not fair too well in the wild. 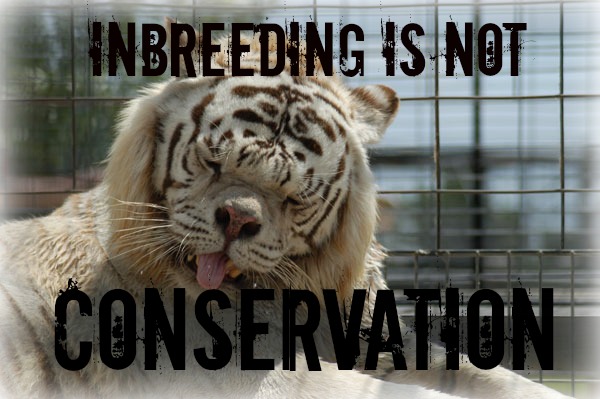 The illustrious white tigers that the circus parades as a majestic and rare animal, is the result of constant inbreeding to perpetuate the genetic mutation that accounts for white fur. Suffering from the same mutation across generations, all white tigers are cross eyed, and many exhibit club feet, spinal defects, cleft palates, even defective organs.

While the origin of the other big cats used in their shows is “unknown,” according to Big Cat Rescue, “circus acts are transient and often are a way of moving big cats across state lines or even in and out of the country. Because the endangered species protection acts are so poorly enforced, this transience creates a legal cover for the illegal importation and exportation of exotic cats.”

2.  How are Ringling Brothers Animals Trained? 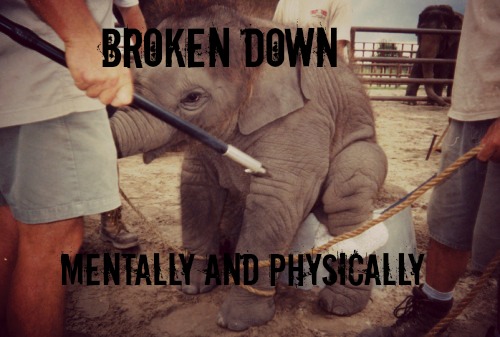 Whistleblower, Sam Haddock has first-hand experience training the baby elephants used in Ringling Brothers and Barnam and Bailey’s shows. After over 30 years training elephants for Ringling Brothers and Barnam and Bailey, Haddock was compelled to report the abuse, providing detailed insight into the process in a declaration, that can be read in-full here. Haddock shared his experience with PETA, along with detailed photos documenting the abuse. The process he explains is as follows.

At the age of 18-22 months, babies are removed from their mothers (who are forcibly restrained to prevent them from acting out to try and rescue their babies) and anchored to one another by ropes that are fastened around their necks. They then enter a six-month “breaking” process where their legs are tied together and they are forced to stand still for 23 hours a day.  This process hinders every natural instinct a young elephant may have, and their days are spent in pain and anguish, deprived of the basic ability to even sit down for hours on end. By the end of these excruciating six months, these elephants lose all willingness to fight back and enter into the training process.

Using bull hooks, ropes, electric prods, and even fireplace pokers, elephants are forced to bow, lie down on command, and balance on their hind legs. This process is hidden completely from the public and is wholly unmonitored by any federal, state, or local entity. 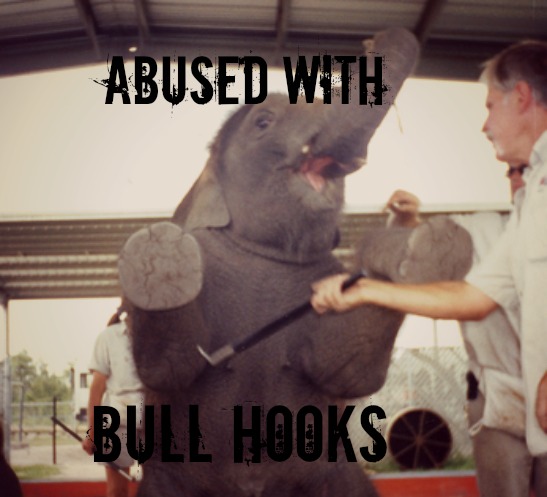 And elephants aren’t the only animal that Ringling Brothers and Barnam and  Bailey exploits, they also feature lions, and white tigers which suffering similar abusive “breaking” processes. Additionally, to maintain control over these animals they are often deprived of food and water for extended periods of time. 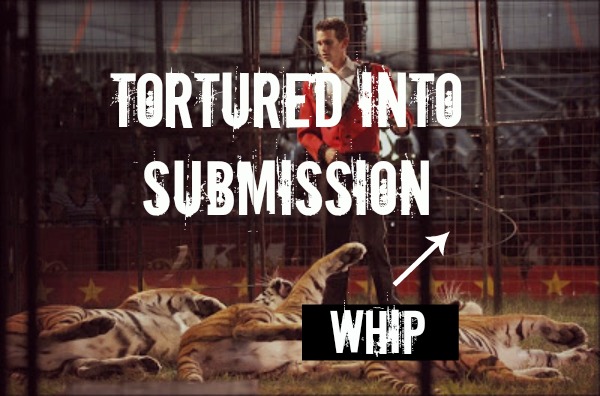 There is a seemingly endless list of reported abuse, mismanagement, and Animal Welfare Act violations that riddle Ringling Brothers and Barnam and Bailey’s rap sheet. PETA has compiled the full list of these unfortunate events in this fact sheet. Of the violations, those mentioned below standout as some of the most deplorable.

In 2011, Feld Entertainment, the parent company of Ringling Brothers and Barnam and Bailey, was ordered by the USDA to pay a fine of $270,000–the largest civil penalty ever assessed against and exhibitor under the AWA for dozens of violations dating back to 2007. Violations include improper handling of dangerous animals, failure to provide animals with veterinary care, causing trauma, behavioral stress, physical harm, and unnecessary discomfort, poor maintenance of enclosures, and failure to test elephants for TB which has been continually passed amongst elephants and spread to trainers as well. 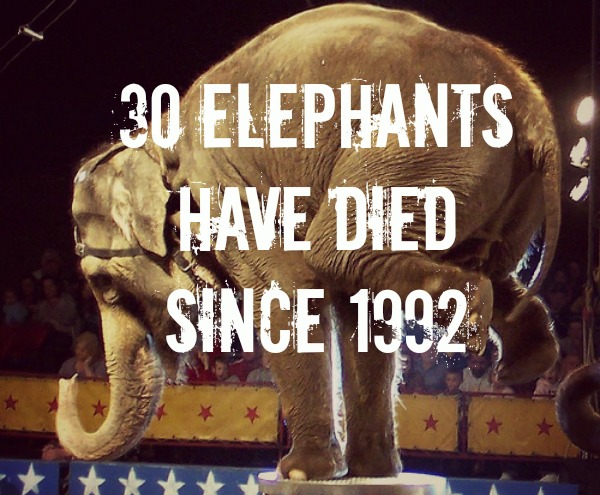 At least 30 elephants, including 4 babies have died since 1992, 2004, a 2-year old lion died from heatstroke when the circus train traversed the Mojave desert. And a number of endangered elephants have been euthanized after sustaining injuries in training  or during performances.

There is also a history of trainer endangerment. In 1993, an elephant killed her trainer, crushing him with her foot. A number of trainers have been hospitalized after sustaining full-body injuries, cuts, and bites.

And the abuse and criminal activity does not end with animals, there is a long record of drug trafficking, aggravated assault, sexual abuse, and rape in the line of employees Ringling Brothers and Barnam and Bailey has on their payroll. Clearly the misogynistic drive to abuse and torture living beings is not solely reserved for animals.

Although Ringling Brothers and Barnam and Bailey would surely have us believe otherwise, the animals used in their shows are in fact wild animals, not creatures bred to perform and love the spotlight. Many of the behaviors circus animals exhibit are fundamentally unnatural. An elephant in the wild would never haphazardly perch themselves on a rock the size of their foot, nor would a wild lion ever willingly approach a burning fire, let alone attempt to jump through it!

While we have learned about how animals are trained by Ringling Brothers and Barnam and Bailey to perform these tasks, what we still need to examine is how life in a circus differs from life in the wild for these animals. Let’s take a look:

In the wild, tigers reside in habitats that range from tropical rainforests, to woodlands, mangrove swamps and the savannah. In the circus, tigers are confined to cages that are barely larger than their own bodies. Tigers only spend about one to nine percent of their time in training, the rest of their time is spent languishing in cages with no enrichment or stimulation. 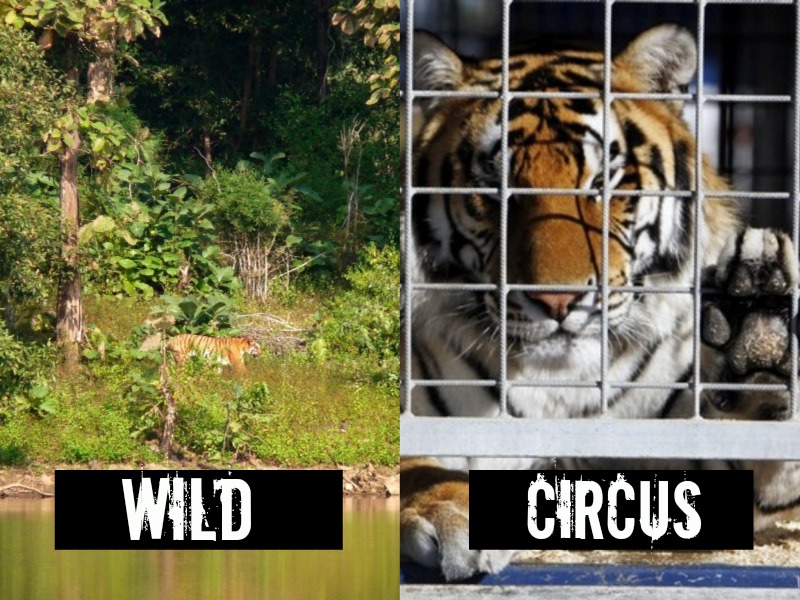 Baby elephants love dust baths, in the wild they spend their days playing with the other young members of their herd. In the circus, the only dust bath baby elephants get happens when they are shoved into the ground “learning” to bow for their human captors. Trainers use bull hooks, electric prods, and ropes to force the terrified young elephant into submission. 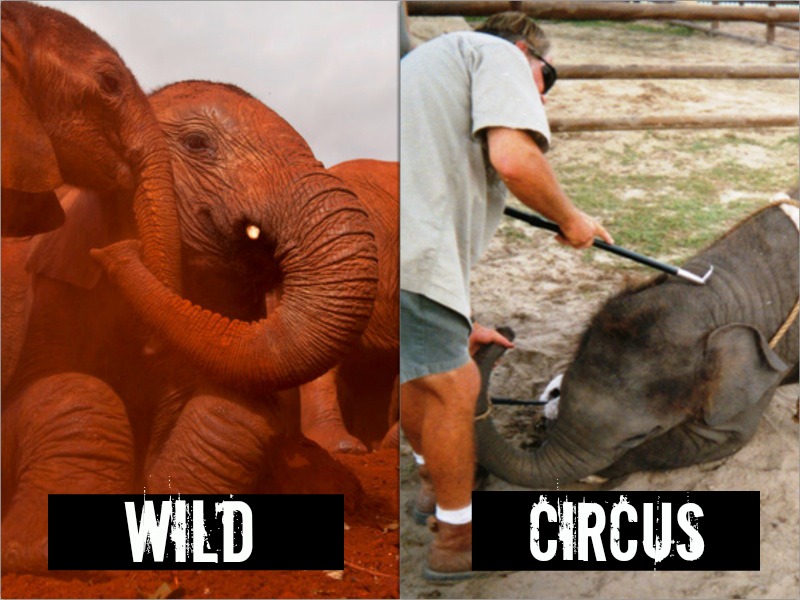 The most important thing in the entire world to a baby elephant is its mother.  In the wild, an elephant baby can nurse for up to two years. The experience of being separated is incredibly traumatic for both a young elephant and its mother. Elephant infants in the circus are ripped from their mothers at a few months of age and both are forcibly tethered to keep the mother from trying to comfort her crying child. 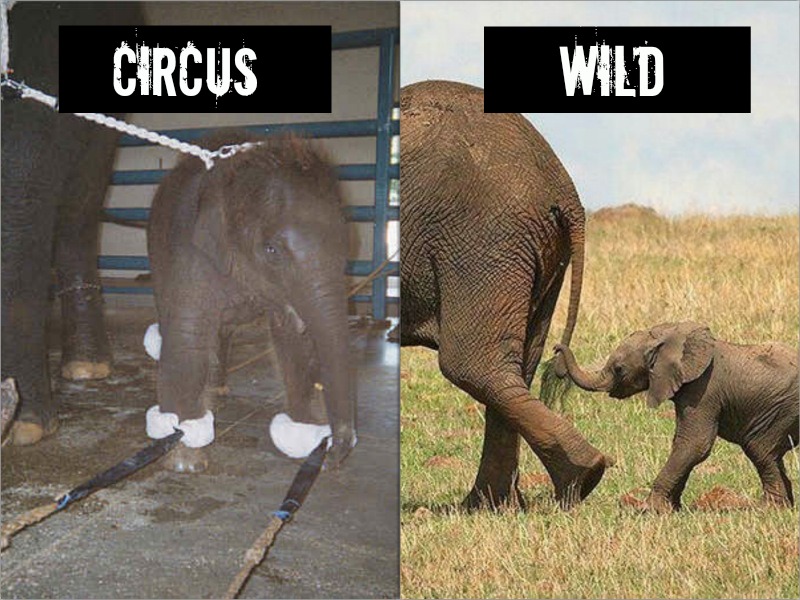 In the wild, lions hunt for their food. When prey is plentiful, lions will literally gorge themselves, able to swallow up to 15 percent of their own body weight. In the circus, when lions are fed, their meals are composed of mostly frozen meat. Lions are habitually starved and deprived of water while being “broken.” Starvation is also used as a trade tool to ensure lions perform to their trainer’s every will. 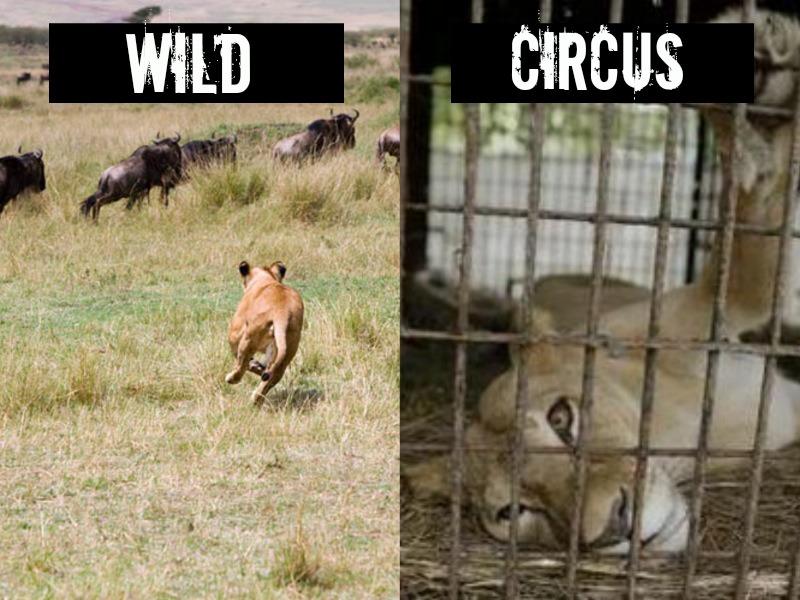 In the wild, elephants can walk an average of 30 miles per day. When they aren’t performing, elephants in the circus are shackled for 12 to 23 hours a day. The rope that restrains them only allows elephants to move one or two meters. 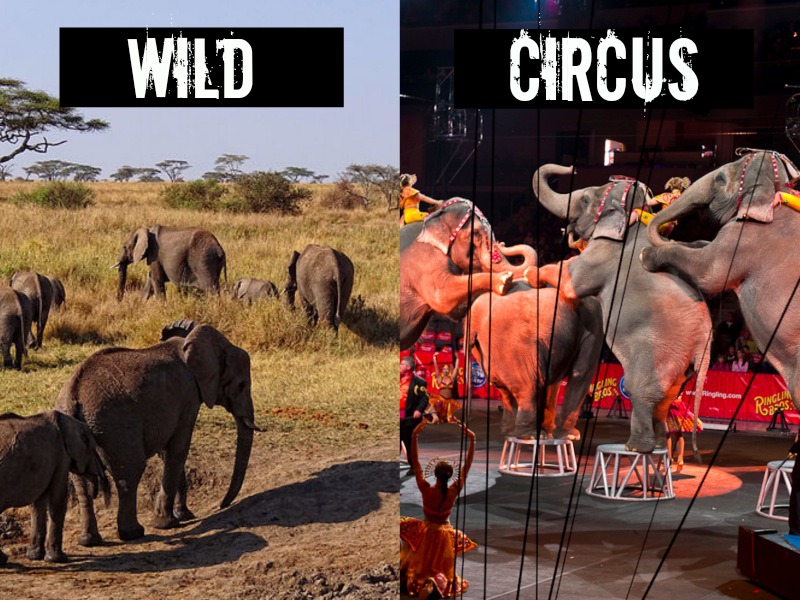 5. What YOU CAN and MUST Do to Stop This Suffering

After reading this, we are sure that as a Green Monster, you’re pretty upset about what you’ve learned. The good news is that you (yes, little ol’ you!) have the power to end this senseless suffering and it all begins with the simple act of deciding not to buy a ticket.

Ringling Brothers and Barnam and Bailey run on profit, without ticket sales, they have no show. According to recent data collected by PETA, in 2014, “Ringling Bros. and Barnum & Bailey Circus has just 544 shows on its schedule, compared to 617 shows in 2013…The decline comes after a wave of protests across the U.S. against the circus’s cruel treatment of elephants, tigers, and other animals.”

Many performances have been cancelled due to low ticket sales and as the market for their act dries up, so to will the undue abuse. This drop in attendance has lead to the cancelation of a number of shows and even the development of a complete ban in Mexico City.

While your individual boycott of Ringling Brothers and Barnam and Bailey shows will make an impact, you can magnify that impact by spreading the word and mobilizing along with your fellow Green Monsters.

Share this post in the review section of the Ringling Brothers and Barnam and Bailey’s pages on Tripadvisor to advise others against going to see the circus when in town.

Participate in our social campaign and share why you are boycotting Ringling Brothers and Barnam and Bailey Circus!

When you know truth, it is your duty to share, so share away Green Monsters and let’s put an end to the cruelest show on Earth!