NYC Carriage Horses Don’t Get What They Really Need… 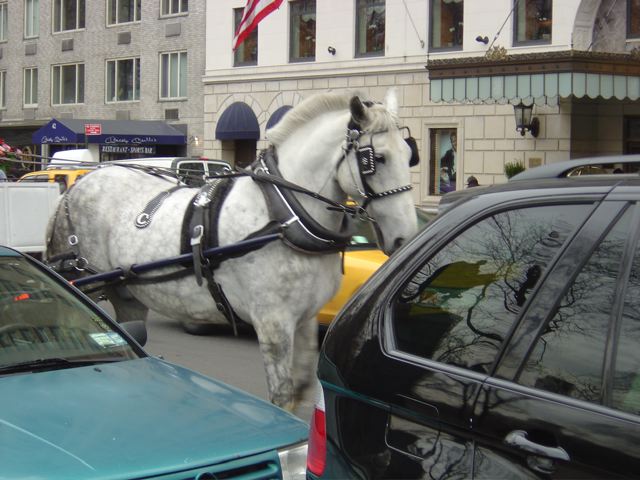 A carriage horse doesn’t need a “vacation.”  But they do need daily turnout to pasture, which they are denied in New York City.

“A needed neigh-cation” by NY Post’s Candice M. Giove, which ran on June 26th, made no pretense at objectivity and read like an advertisement for the controversial NYC carriage-horse business.  The article highlighted a few NYC carriage horses who were on “vacation.”  No opposing viewpoints were included and Senator Tony Avella was described as someone who “misunderstands” this business. An opponent of horse-drawn carriages since 2007, when he introduced the historic bill to ban the trade, Avella recently introduced a similar bill in the NY State Senate.

The word “vacation” is a human concept, so it was disturbing, but not surprising, when the City Council voted in 2010 to require that carriage horses get five weeks of “vacation” a year … perhaps better than nothing, but not the daily turnout they need.

“Persuaded” by Speaker Christine Quinn, who wields ultimate power and is a big supporter of the industry, most Council members voted for the industry bill with no real understanding of equine needs.

Some of the members expressed concern with how this clause would be enforced since it appeared to be on the honor system.  But that was as far as their concerns went.  There is no way of knowing if a horse is truly relaxing or working on an Amish farm.

One of the problems with this window-dressing legislation was that it did not provide the necessary daily turnout to pasture, which requires 1 to 1 ½ acres per horse and cannot be accommodated by NYC stables.   As social herd animals and not machines, horses need to interact with their own species, to graze, run, buck, roll and play, to scratch themselves, stretch and engage in mutual grooming, which is a great stress reducer.

They have none of this for 47 weeks of the year.  Humane?  I think not.

Snow job on the public?  Absolutely.

The few horses at this “retreat” in the Catskills are the same ones who lug tourists around for the other 47 weeks and never get to roll in the grass of Central Park as they pass by,  encumbered by blinders, barely able to get a glimpse of the grass that is denied to them.

Legally allowed to work up to nine hours a day, seven days a week, the horses return to their stables down traffic-clogged Ninth Avenue, mixing with vehicles going to the Lincoln Tunnel, as they breath in exhaust fumes.  It has been referred to as a “nose-to-tailpipe” existence.

There are over 200 horses living in four multi-storied warehouse stables.  Stalls are legally required to be a minimum of only 60 square feet  – less than half of what experts recommend, which is 144 square feet for standardbreds and at least 196 square feet for the larger draft breeds.  The stable for police horses on 12th avenue has 12’ x 12’ stalls and an indoor ring for exercise.

Is this business popular like some in the media like to claim? And what about the use of the public relations word “iconic?”

Some say the word is overused.  A writer in the Liverpool Daily Post called the word “iconic” a word “pressed into service to describe almost anything” and that it was “a word that makes my flesh creep.” The Christian Examiner nominated “iconic” to its list of overused words.

Let’s stop referring to this inherently inhumane business as “iconic” as if it were something sacred – as if saying it enough times would make it so.  It isn’t and it should go the way of gas lamps.

But “iconic” aside, we have thousands upon thousands of signatures on petitions of people who want to see the industry shut down – from all 50 states and over 55 countries.  Every time there is a poll  – whether from EXTRA, Crain’s NY Business or WCBS TV, about 75% of respondents vote in favor of a ban.  I would say that “popular” is not an accurate description.

Carriage horses are not things to be exploited for monetary gain.  They have no voice and no choice.  As long as the industry continues to be politically connected and the media supports a myth, the truth will not get out.

CLICK HERE to find out what YOU can do to make a difference for NYC carriage horses.