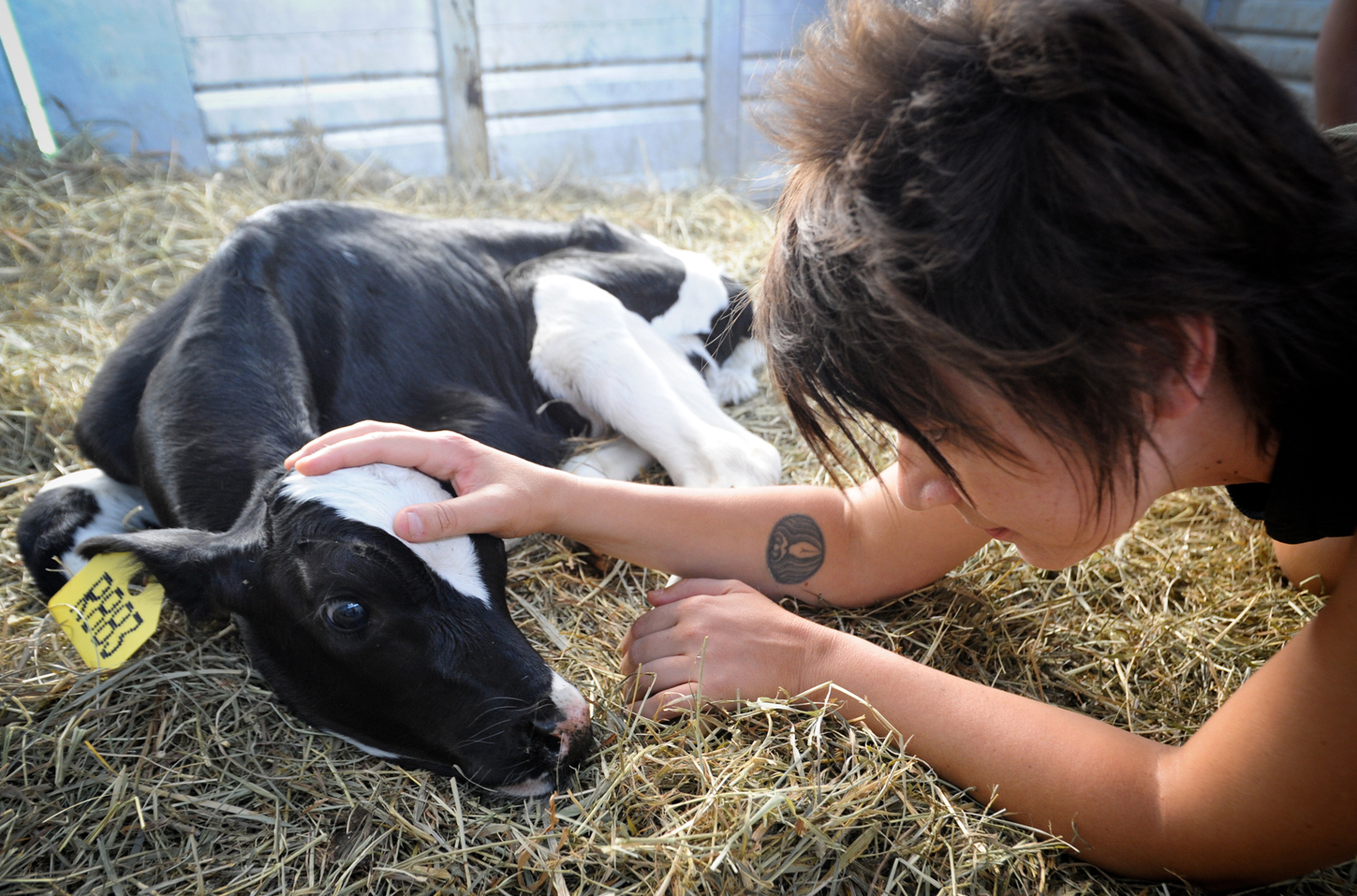 The suffering of animals in factory farms or the horrors of environmental degradation can often seem far removed from our day-to-day lives. It can be difficult for us to connect the delicious cookie in our hands with mass deforestation and habitat loss in the Leuser Ecosystem of Sumatra, or to fathom the vast amount of suffering that goes into our hamburgers. When we hear that 52 percent of the world’s wildlife has disappeared over the past forty years, or that 8.8 million tons of plastic make their way into the oceans every year, those statistics can seem as though they have little relevance to the everyday decisions we make. In recent years, however, a growing number of artists, photographers, musicians, and filmmakers have dedicated themselves to portraying the truth about what’s happening to our planet and its inhabitants.

Art can be a powerful awareness-raising tool that helps us to break down our resistance to acknowledging the scale of environmental and animal rights problems, and envisage solutions instead. When it comes to factory farmed animals, a number of pioneering artists such as Dana Ellyn, Jonathan Horowitz, and Sue Coe are helping us to revolutionize our understanding of their plight, and one of the most iconic art activists is filmmaker, Liz Marshall. 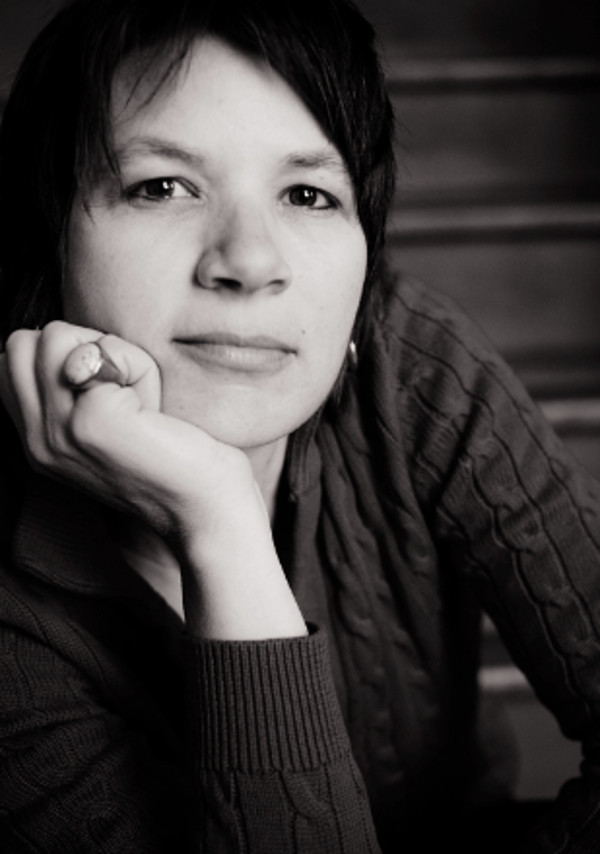 Liz Marshall has a long record of exploring environmental and animal rights issues in her work. Her 2010 documentary, Water On The Table, followed the renowned “water-warrior” activist Maude Barlow’s efforts to have water declared as a basic human right that should be protected from privatization. Her 2013 documentary The Ghosts in Our Machine – which featured famed animal rights activist and photographer Jo-Anne McArthur – has been feted as one of the definitive animal rights documentaries of our time, and has received more than fourteen award nominations across the globe.

Marshall will be speaking at the ENDOTREND Festival in Denver, Colorado, on October 1st, arranged by philanthropic event organizers Tindakan. This event aims to use art and interactive components to engage and inform people about the issues facing the environment and animals while at the same time, teaching them how they can use their everyday choices – from the food they eat to the goods they buy – to make a positive impact on the world around them. Ahead of Marshall’s appearance at the festival, One Green Planet spoke to her to find out more about the inspiration behind her films, and how she hopes to change viewers’ perspectives of animals and the environment.

“I began my career in the 1990s, focusing my lens and my passion on human stories which led to an array of life changing projects shot around the globe in war torn, developing and developed countries,” Marshall explained. “In the mid 2000s, I became very interested in environmental issues, but also in long form storytelling, which led me to make my two feature length documentaries: ‘Water On The Table,’ and ‘The Ghosts in Our Machine.’ My partner in life is a long time animal rights activist, and she inspired me to pay closer attention to animal issues. I have been an animal advocate for as long as I can remember, but I really credit Lorena as one who tapped me on the shoulder, and urged me to look closely, as a filmmaker, at the animal question.”

Aiding a Societal Shift Toward Empathy for Animals 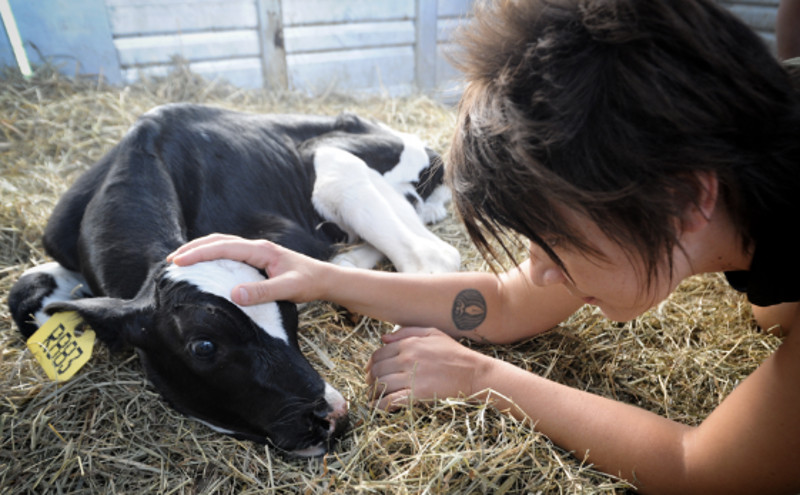 Speaking about the driving force behind her desire to highlight these issues, Marshall said, “The profound disconnect between our dominant urban world and the natural world, including nonhuman animals, is a chasm that must be rectified, for the sake of sanity.” But it is clear that she isn’t content in settling with this conclusion, she continued, “I do believe that a significant shift is taking place, towards a more respectful and curious and humble understanding of our dependence on the natural world, and as part of that shift we are learning about animal sentience, which is very important if we are going to see a move away from the conventional system that enslaves animals en mass for food, fashion, research, and entertainment.”

She admits that making “The Ghosts in Our Machine” – which pulled no punches in portraying the reality of how animals suffer when they are used in human industrial systems – was an emotionally taxing endeavor. “What keeps me going while I do my work is staying focused on the story at hand, and making the best film that I can, that hopefully a lot of people will watch,” she stated. “Making the film, and then dialoging with audiences, is what helps me to work out my emotions around what I have witnessed.”

In spite of the difficulties associated with shining a light on the harrowing issue of animal exploitation, Marshall is grateful for the impact that the documentary has made among people who may never have considered the issue before. “Each film I have had the privilege of making and collaborating on with others, is life changing in some way,” she explained. “Making ‘The Ghosts in Our Machine’ expanded my world view, and I couldn’t be happier with the global response the film has had, and continues to have.” She hopes that the main things people take away from watching her films are: “A new way of seeing the world. Reflection and dialogue. Greater empathy. Motivation and energy.”

Marshall’s Plans for the Future

Despite the scale of Marshall’s previous success, it looks she has no intention of resting on her laurels any time soon! She currently has two films in the works, one focuses on a back-to-the-land social experiment (commune) that her parents founded in the 1970s.  Marshall is more reluctant to give away precise details about the second film she and her team have in production, but it sounds as though it’ll be worth the wait. “The other film I am directing/producing is very different,” she said. “I am currently working with a great team of producers, and some partners in the U.S., to develop a big documentary that we will unveil this fall via social media. In many ways it is an extension of all of my social issue documentary work to-date, and in the spirit of ‘The Ghosts in Our Machine,’ I am very interested in engaging an audience early on in the process.”

Looks like we’d better watch this space, Green Monsters! You can keep up with Marshall’s progress – in addition to gaining more information about her previous work – by visiting her website.