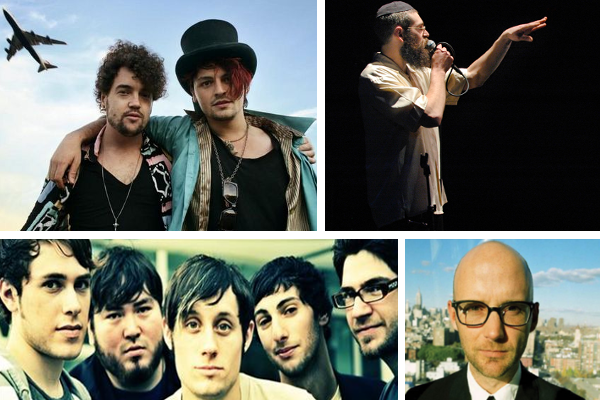 From Fiona Apple and Alanis Morissette to Bif Naked, Ted Leo and the legendary Joan Jett, vegan virtuosos are pervasive in every music genre. So, no matter your musical fancy, you're bound to find an artist who's got a taste for tofu stir-fry. Here are some varied vegan artists who I'd have over for dinner any nigh "> Vegan Musicians: More Than Just A Trend - One Green Planet
Food Monster App Tiny Rescue Shop Newsletter Support Us Cookbooks Petitions

The people who say all vegans are tree-hugging hippies probably don’t know very many vegans. And the people who say that all vegan musicians are punk rockers just haven’t done their research. More and more musicians are taking an alternative, cruelty-free path and it’s not just the Propagandhis of the world, though credit must be given for their scream-it-like-you-mean it lyrics, “life’s too short to make another’s shorter – animal liberation now!”

From Fiona Apple and Alanis Morissette to Bif Naked, Ted Leo and the legendary Joan Jett, vegan virtuosos are pervasive in every music genre. So, no matter your musical fancy, you’re bound to find an artist who’s got a taste for tofu stir-fry. Here are some varied vegan artists who I’d have over for dinner any night.

American Idol winner, country-pop songstress and true beauty Carrie Underwood recently revealed that she has made the switch from vegetarian to vegan. Health reasons were her main driver in this decision, but growing up on a farm, Carrie has said about her vegetarianism, “Once I learned why we had a farm, that was that.” Okay Carrie, I think you should come over for some vegan soul food.

Shawn Harris just celebrated his birthday with vegan carrot cake. He told me, “I’m eating vegan carrot cake, and so are my friends, and they have no idea it’s vegan. Ya gotta fool em before you school em.” Wise words indeed. Formerly the frontman in pop-punk group The Matches, Shawn has since started Maniac with friend Jake Grigg. Shawn’s sister, Vanessa, also vegan, tours with the guys and sings backup to their pop hooks. Together, Maniac’s creativity is off the charts. At live shows, the three have been known to start their performance from within the crowd, singing and playing acoustic to “Fill the Lens” as they walk onto the stage and plug in. And, take their music video for “3 Kings Day” as another example: Shawn and Jake filmed the entire video over iChat, seamlessly transitioning from Shawn filming in California to Jake filming in Australia. Absolutely brilliant!

He’s rock, he’s reggae, he’s hip hop and part Jazz. He’s an Orthodox Jew and he’s freshly vegan too! Matisyahu wowed crowds with his unique style and rose to the top of the charts in 2006 with “King Without a Crown.” He’s been going strong since, having released three studio albums and two live albums. Just last year Matisyahu announced that he and his wife had gone vegan. The move makes great sense especially because most all vegan food, by definition, is also Kosher. In an interview with heeb’n’vegan, Matisyahu sums up the main idea as, “to be conscious of what we put in our bodies, to be healthy, to not partake in the karma of mistreating or disrespecting anything that is a part of this world, especially living creatures.” Well said! This Friday night, let’s pull out two loaves of vegan challah for Matisyahu!

At SXSW this year I am sure that I went to one of the best day parties of the festival. Not only did this party have vegan BBQ and a see-saw constructed to look like a hipster’s mustache, but Moby was the host and star DJ. I’ve never been disappointed by a live Moby show. It’s energetic, electric, puts you in a trance and makes you jump up and dance. His music is fun, rhythmic and beautiful, a work of modern musical art. Moby is also a vegan veteran, animal rights activist and environmentalist. He’s an avid supporter of Farm Sanctuaries and in 2002 he even opened a vegetarian tea shop and cafe, Teany, in New York’s Lower East Side. Though no longer owned by Moby, the restaurant still serves up delicious vegan sandwiches and goodies like vegan chocolate peanut butter mousse cake. Yes, please!

Indie: The Lives of Famous Men

When you think of Alaska, you probably don’t think “vegan-friendly.” That may be true, but Alaskan indie rockers, The Lives of Famous Men, could change that. In 2009 I had the pleasure of interviewing the bright-eyed, fresh-faced quintet and was also prompted to issue the band’s drummer, Dylan Mandel, a vegan challenge. Could he go vegan for 30 days? In Alaska? In the studio? On the road? With guidance from other musicians like The Cro-Mags’ John Joseph and the support of Peta2 and PlanetVerge, staying vegan wasn’t much sweat for Dylan. Dylan has since inspired bandmates Jason Wahto and Daniel Hall to go vegetarian. Now that’s what it’s all about! And the music? As the PlanetVerge girls like to say, it’s love at first listen.

Listen in on some Lives of Famous Men’s originals as I teach the guys how to get vegan protein from a source other than peanut butter: