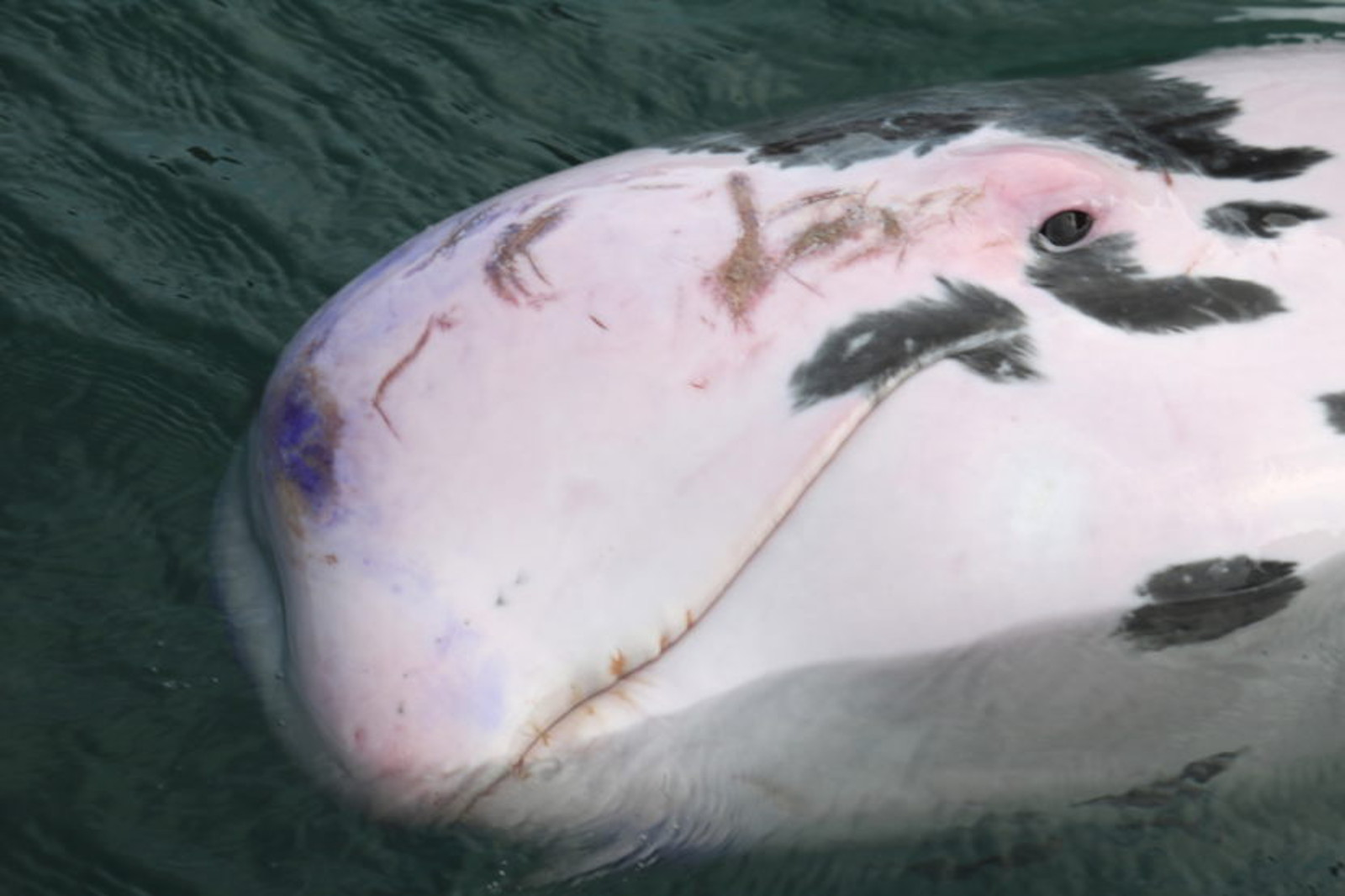 The following is reprinted by permission from Dolphin Project, authored by Cynthia Fernandez.

Two years ago while documenting a drive of Risso’s dolphins, I noticed an unusually-colored individual. It was mostly white with patches of gray pigment – a piebald. The dolphin wasn’t a true albino, due to the gray, but it was a rare capture, nonetheless.

I watched in horror as the piebald, along with a normal-colored companion, were wrestled into slings and taken out of the infamous cove to be dumped into a sea pen in the Taiji harbor. Their lives would forever be changed, destined to suffer in captivity. The rest of the unfortunate pod were slaughtered.

Over the next, few days I checked on the piebald and it’s companion as often as I could. I watched as the trainers would come and toss dead squid into the pen and watched as their spirits were broken, as they did what they had to do, to survive.

I watched as they were relocated to the Taiji Whale Museum, hidden in a back pen where I couldn’t see them very well. Sadly, I had to leave Taiji, but while on the train to the airport, I learned that a second unusual Risso’s dolphin was captured, this one, a true albino. And I knew what it’s fate would be. As you can imagine, I left Japan with a very, heavy heart. 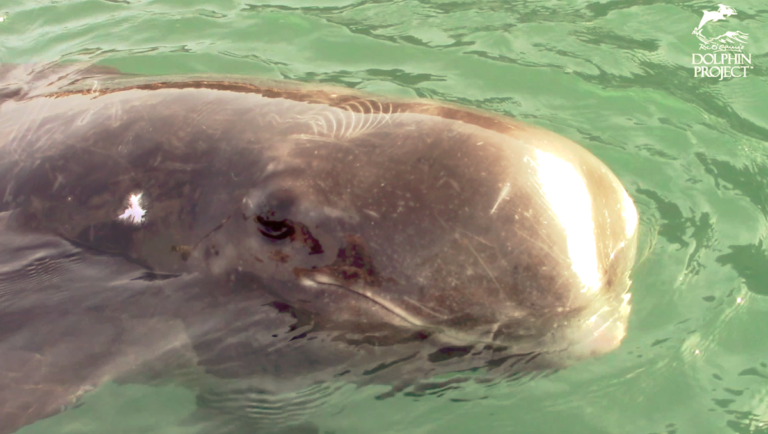 The following year when I returned to Taiji (2015), I went straight to the Taiji Whale Museum to check on the captive dolphins. I had to see for myself what had become of the piebald and the albino Risso’s. I finally found the piebald in a pen with bottlenose dolphins, and while I couldn’t see him very well, he appeared agitated, splashing continuously. I was unsure about his condition and wondered why he had been separated from the other Risso’s.

A few days ago, I returned to Taiji, once again, as a Dolphin Project Cove Monitor. Naturally, I was eager to see what had become of the piebald that I felt such a strong connection to. I made my way past the front pools and the front part of the lagoon to check on the Risso’s pen.

Nothing could have prepared me for what I saw.

I literally gasped when I spotted him. That beautiful animal had rake marks over much of his body, both large and small ones.  Some looked like open wounds. He also had a bunch of little wounds around his mouth. He looked beaten and bloody. 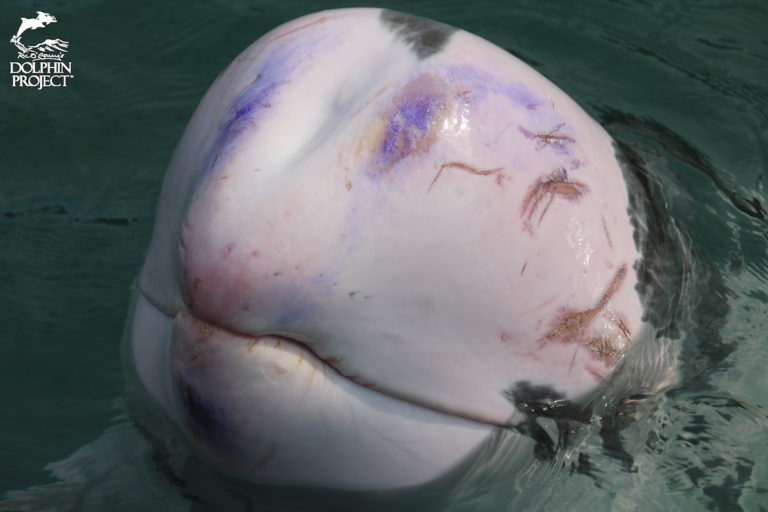 Not only had he been raked mercilessly, he also had some sort of skin condition that caused raised bumps in patches along several areas of his body. As I attempted to assess his condition, tears welled up in my eyes. However, the most haunting thing was the way he looked at me. The poor Risso’s hopped in front of me, looking directly into my eyes. I couldn’t help but wonder if he knew I had been with him when he was captured and wanted so desperately to help him. His gaze looked like a plea for help – and it broke my heart.

I apologized for not being able to help him and for the actions of my species. I will never understand how anyone could think dolphin captivity is okay. Trapped in a small sea pen with other frustrated, captive dolphins, there is no place to run when one is getting bullied, and no escape from the attacks – behaviors that stem from the utter devastation of being held against one’s will. How I wished his family had never tried to migrate past Taiji, and that he and his family were still swimming free in the ocean. I’ve experienced a lot of heartbreak here in Taiji, but knowing the depth of his suffering and feeling powerless to help was gut-wrenching. 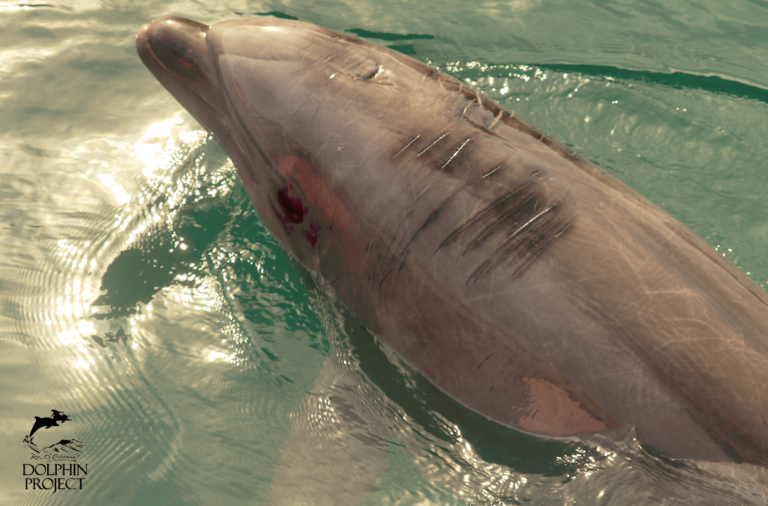 We Need to Do Better

My fellow Cove Monitor, Alexandra Johnston, pointed out another suffering animal – a bottlenose dolphin with deep gashes across it’s back. Again, I was horrified. The injuries were hideous, and when the dolphin approached us at the pier, begging for handouts, it took all I had not to reach down and comfort this poor soul. Other bottlenose dolphins were inflicted with various skin conditions, and all the dolphins we documented spent most of their time logging listlessly on the surface of the water. Many jammed their faces against the nets which held them captive. The albino Risso’s spent much of its time in the corner of the pen, pressed up against the net while emitting a series of squeaks. Again, I interpreted this as a cry for help.

Before I left for the day, I returned to the pen holding the piebald. His raised bumpy patches were now purple, covered in some sort of medicine. He spyhopped near me and once again, we locked eyes. I will never forget the look in those eyes and the guilt I felt for not being able to help him. I asked him to stay strong and to fight back, to not let the others bully him so much.

Yet, even when I uttered those words, I wondered if death might be the most humane release for him. Maybe then, he could join his family in an ocean free from humans, and be wild and free for all eternity.

For more information on Dolphin Project’s campaign in Taiji, Japan and how you can help, please visit DolphinProject.com