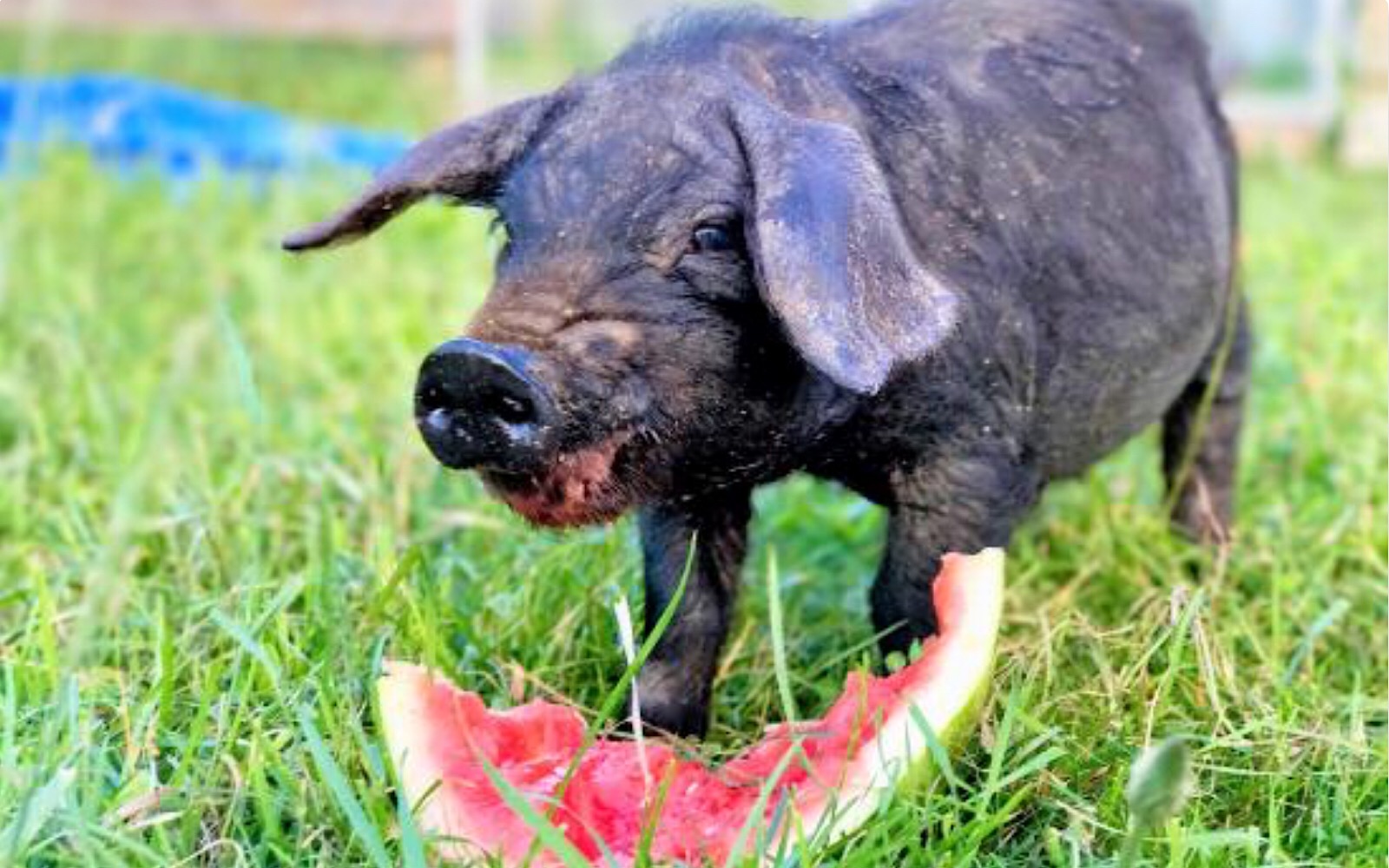 Meet the newest family at Woodstock Farm Sanctuary! Mother pig Agnes and her four babies were recently rescued from a local resident who was raising them for food. Today, they are learning what it means to be loved, but sadly it wasn’t always this way. In fact, it took the loss of one of Agnes’ baby piglets, Hurley, to lead to the rescue of this neglected family.

Hurley was just a tiny baby when he was found lost and wandering around this summer. He was in such terrible shape that the woman who found him couldn’t even tell what he was. But she was kind enough to take him to a vet as it was clear the animal was suffering greatly. After examining him the vet reached out to Woodstock Farm Sanctuary, and they agreed to take him in.

In the days that followed, caregivers worked around the clock to help little Hurley. His skin was so badly sunburned and covered in mange that the pain he endured must have been immense. Shelter Director Kathy Keefe tears up as she describes giving him his first bath, pulling back his ears and seeing his eyes filled with what could only be described as “resignation.”

Here is baby Hurley after he was rescued from the side of the road. 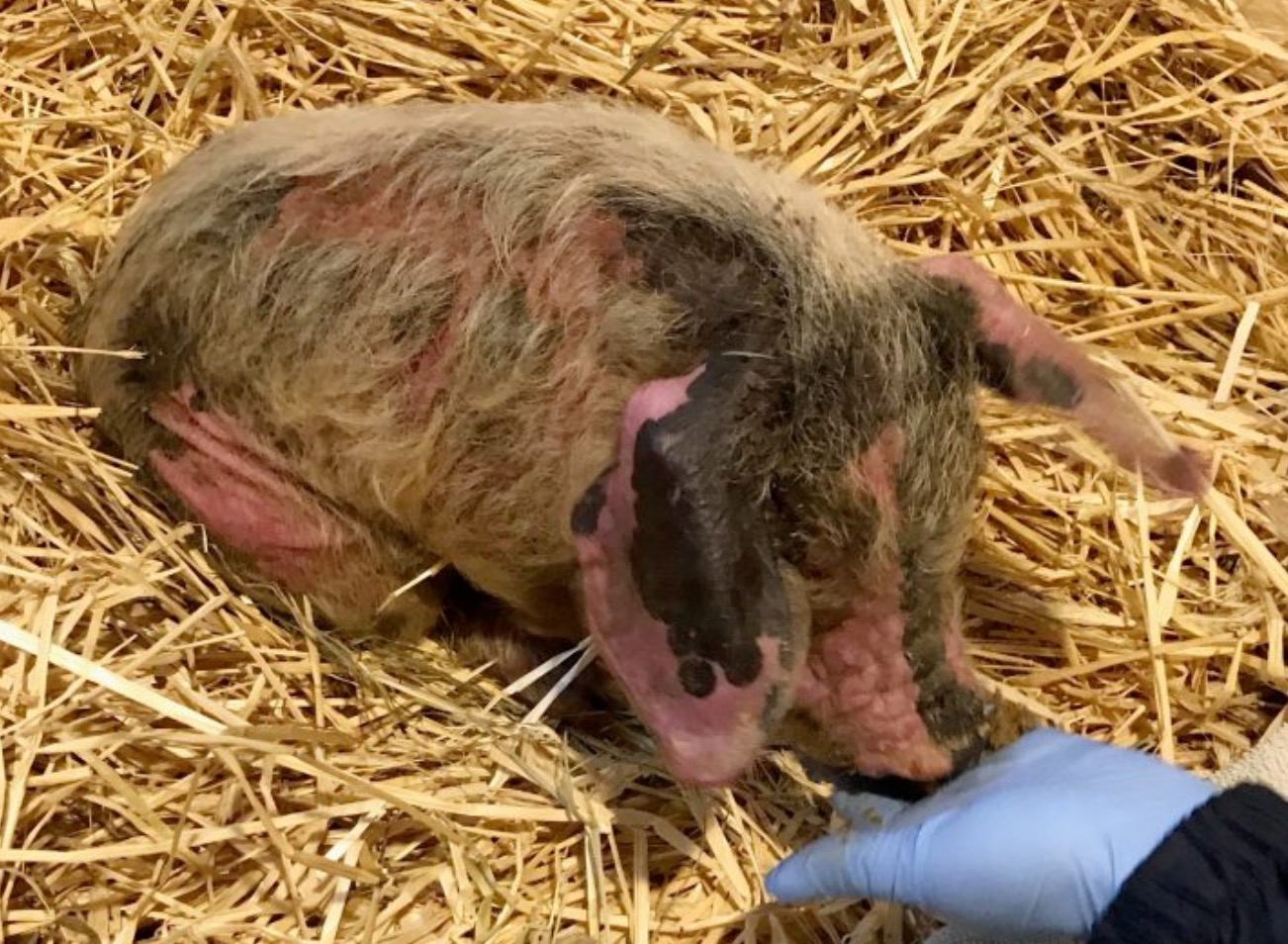 Even if he looked like he had given up the team continued to fight for little Hurley, putting aloe on his skin, giving him medications and making sure he was never alone, even overnight. He began to show improvement, but sadly the neglect, hunger, and weeks of being in pain finally caught up with him, and after four days, he died. As devastated as the team was, they knew Hurley had to have come from somewhere, and that meant that more animals could be suffering. And so they worked with the Ulster County SPCA and found the property where the rest of Hurley’s family lived.

And thank goodness they did! Upon arriving they found Hurley’s mom and his three brothers in a small pen, exposed in the sunlight, with no food or water and nothing but dirt underneath them. Their skin was sunburnt and they looked emaciated. Most people think pigs just play in the mud because they are dirty but in fact, pigs use mud as a way of cooling and protecting their delicate skin which is easily prone to burning, especially when there is no shelter or shade from the sun. With no access to mud to help them retain moisture, this family must have suffered immensely, the worst of which we saw with Hurley.

Along with the three baby pigs in the main pen, rescuers knew from reports that there was one more piglet that was missing and feared they many have been too late. But they soon spotted her in another pen across the property, all by herself, scared and alone. They planned to get her after loading the rest of the family into the trailer.

After they cut into the pen where Mother Agnes was, caregivers used food to try to lead her towards the trailer, but as most mothers know, there is nothing more important than knowing your baby is safe. Agnes ignored the food and ran to her little girl’s pen where she began pacing and trying to find her way in. In order to get her to follow them, rescuers had to scoop up the baby, Pamela, and run her into the trailer with Agnes quickly following behind! Then the rest of her piglets, Peter, Bradley, and Mishka, were brought in, and the family began the journey to their new home at Woodstock Farm Sanctuary.

The rescued piglets share a tender moment with their new caretaker at Woodstock Farm Sanctuary. 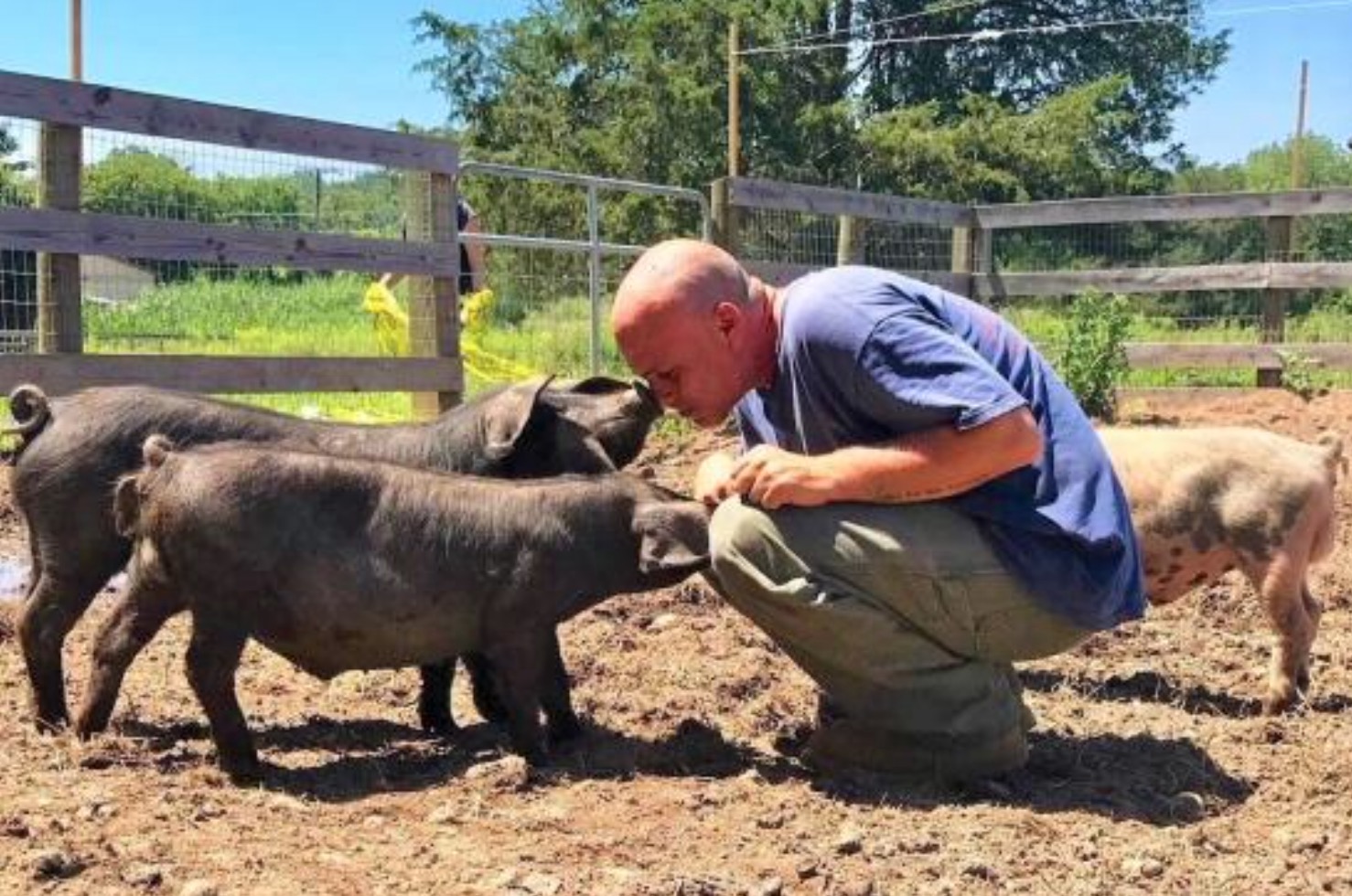 While we can see the physical damage that this family endured, we can never truly know the mental and emotional agony that they have experienced. What we do know is that pigs are complex, highly intelligent animals who feel emotions like us and care for their friends and families. We can only wonder if Agnes, who chose to run to find her little girl rather than take food or water, still misses Hurley.

Today, Agnes and her babies know love for the first time. They feel grass underneath them and are able to run and play and be the social animals that pigs are. Agnes has slowly opened her heart to her caregivers. She has come to understand that she is safe and she lets them handle her babies. The whole family loves to lay on their sides and get belly rubs, which is a favorite for most pigs!

Soon this brave little family will meet and live with the other pigs that live at the sanctuary, and hopefully, in time, they will forget the trauma of what came before. As for us humans, it is our job to remember and fight for those who cannot speak; animals like little Hurley who hang on as long as they can, waiting for us.

If you would like to make a donation towards the care and shelter of this family, and in memory of Hurley, please do so here.