This Incredible Organization is Using Oranges to Save Asian Elephants 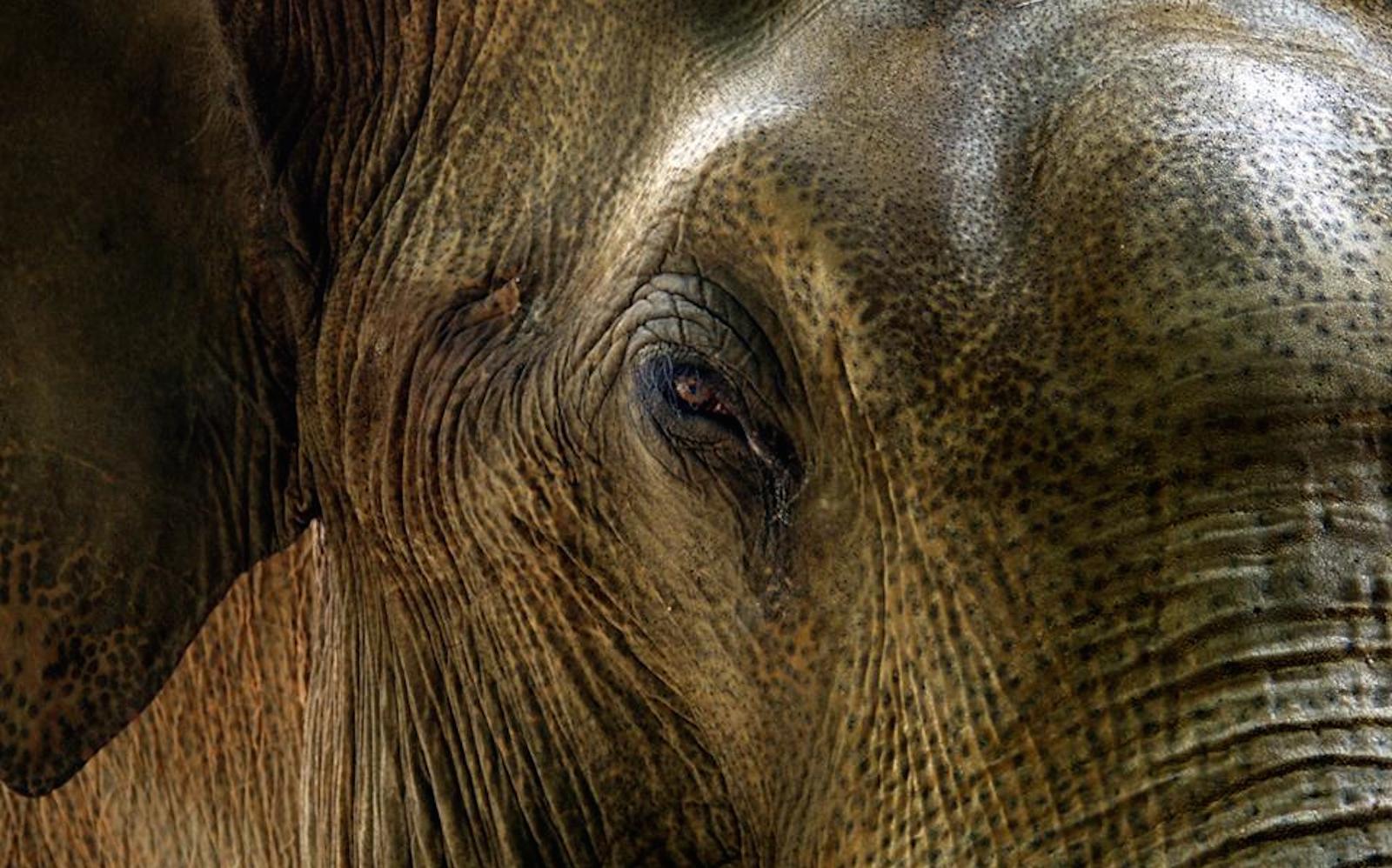 Asian elephants are one of the world’s most endangered species. Although they are revered and respected in many cultures, these animals are still targeted by poachers for the illegal ivory trade and exploited in the tourism industry. There are only around 30,000 Asian elephants left in the wild, and unless human-elephant conflict ends (and soon), these animals will go extinct within our lifetimes.

Rather than placing blame on any one group or community for the plight of elephants, Heart of Ganesh chooses to promote understanding, education and raising awareness to alleviate tension between people and elephants. They feel that educating people and empowering them to make compassionate choices is the perfect way to help both wild and captive elephants around the globe.

The Beginning of Heart of Ganesh

It all began with a beautiful temple elephant named Ganga. Sundari SitaRam, the founder of Heart of Ganesh, came across a video of Ganga online and was shocked. She saw the little elephant, miserable at a temple, as people filed past ignoring her completely. 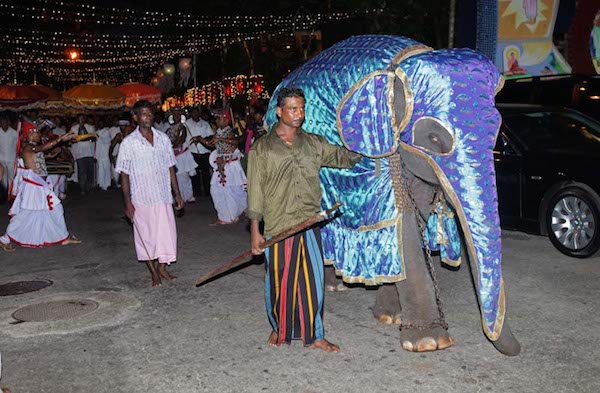 “[I thought] Why doesn’t somebody DO something about this?” SitaRam tells One Green Planet. “The moment the sun rose the next morning, I knew my life was about to forever and irrevocably change.  That morning I started the process to sell the yoga center that had formed the core of my life for over 10 years and began pricing plane tickets to places like Thailand, Myanmar, Cambodia, Sri Lanka.”

After spending a month researching and volunteering in Thailand, she traveled to Sri Lanka where she finally met the elephant that changed her life.

“She was chained by her front right and back left legs, confined on urine-drenched bricks, unable to turn around or even see the traffic that roared behind her, and had no free access to water, rest, or even companionship from another elephant,” describes SitaRam to One Green Planet. “I suffered an absolute crisis of disbelief the moment I saw her that haunted me for the better part of the 2014. I tried to turn away. I wanted to turn away.  But as I spent hour after hour watching people watch her and picturing her there day after day, year after year, chained and alone, there simply was no turning back.” 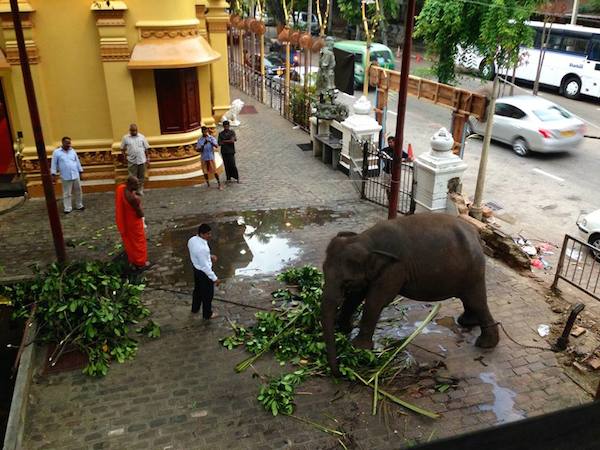 At the beginning of her time in Sri Lanka, SitaRam worked closely with the Sri Lanka Wildlife Conservation Center, SLWCC. Some of their work focuses on resolving human-elephant conflict by taking care of people. Raising the socio-economic status of villagers will allow them to make choices that are more compassionate.

In places like Sri Lanka, human-elephant conflict is rampant. In fact, according to SitaRam, every week at least three elephants will die and one human will lose their life as a direct result of this conflict. As resources become scarce and elephant habitats become more limited, the conflict is expected to only get worst. Elephants regularly destroy the only livelihood these people have, their farms and homes. In response, people fight off elephants, sometimes killing the elephants, sometimes dying in the process. Figuring out a solution to harmoniously living sounds easy, but takes more creativity and hard work than we would ever expect.

“Humans … We are the largest challenge facing Asian elephants,” explains SitaRam, “That’s the bad news. The good news is, we are also the only hope for saving them.”

In their first year, Heart of Ganesh joined with SLWCC and printed human-elephant conflict resolution brochures in several languages, distributing them to farmers. This was a fantastic and effective way to begin to educate the people dealing with elephants the most.

The next project Heart of Ganesh took on was designed to promote peaceful living between Sri Lankan people and their wild elephants. The project aims to help farmers protect their rice paddy’s and homes from encroaching elephants, increase their income and keep elephants and people safe by planting orange trees. By growing a barrier of citrus trees around rice crops, rural Sri Lankan families can create a safe and sustainable elephant deterrent. Elephants don’t tend to “raid” citrus trees and they tall enough that the elephants won’t trample them. The orange trees also provide new income for these families in case they do lose their rice crops. 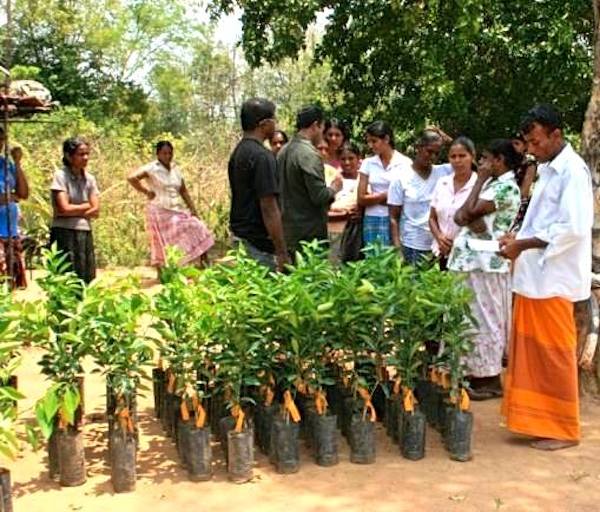 “We aimed to raise funds for 10 farmers but were able to supply 18 families with their new crops and additional support such as generators, water pumps, and professional support in learning how to get and keep their orange trees thriving,” says SitaRam. “There are still so many families on the waiting list, and we are committed to including all of them in the project so the entire village can be successful.”

With 18 families more informed about how they can live in harmony with elephants while increasing their income, Project Orange Elephant was a huge success. SLWCC and Heart of Ganesh are now working on the next phase of this project, hoping to supply over 100 more families with education and orange tree saplings.

“This summer we’ll be launching a crowdfunding campaign to support that project with the SLWCS, with a goal to get every family in the village off the waiting list and supplied with orange trees,” explains SitaRam. “After the trees get in the ground, we’ll begin building a long-term, multi-faceted, systems theory approach to human-elephant conflict resolution in the village, saving wild elephants by helping local people.”

Project Orange Elephant isn’t all this awesome organization is doing. They are working hard to better the lives of captive elephants as well, starting with Ganga.

“In April we launch ‘Two Million Letters for Compassion,’ an international campaign raising awareness about temple elephants, starting with Ganga,” says SitaRam, “Two million letters coming from all over the world to the new president of the country and to the monk in charge of Ganga’s care. We have no desire to blame or shame, so the letters will be in encouraging support of them turning the tide and leading the call for compassionate care.”

And you don’t have to be in Sri Lanka to get involved with this incredible project. Heart of Ganesh needs people from around the world to write these letters. If you are interested in getting involved, visit their website here.

Heart of Ganesh is working to completely redefine the relationship between humans and elephants, both in captivity and in the wild. Time is running out for elephants and it is critical that we do all we can to protect these incredible creatures before it is too late.