A new undercover investigation found over 200 dogs being held in captivity for a dog meat auction in South Korea at Nakwon Auction House in the city of Namyangju.

Footage and images from animal rights nonprofit Lady Freethinker depicted more than 200 dogs stuffed in 60 metal crates and cages, barking in fear as an auctioneer prods them with a metal hook.

The auction and investigation took place earlier this summer during the “Bok Nal Days,” believed to be the three hottest days of the year. During these days, dog meat is consumed mainly by the elderly out of a misguided belief that it will reduce lethargy, cool the body, and invigorate one’s health. The dogs are typically cooked a soup called boshintang or as a tonic sold in traditional medicine shops.

However, most major dog meat auction houses in South Korea have closed and demand for dog meat among locals remains low. A 2019 poll from the Korean Animal Welfare Association found only 12.2% of South Korean respondents were still eating dogs and 41% reported that they used to eat dogs but were no longer doing so.

Yet the Nakwon Auction House still remains open but is advertised as a dog breeding facility. South Korea is the only country in the world with large-scale, commercial dog meat farms according to Lady Freethinker. 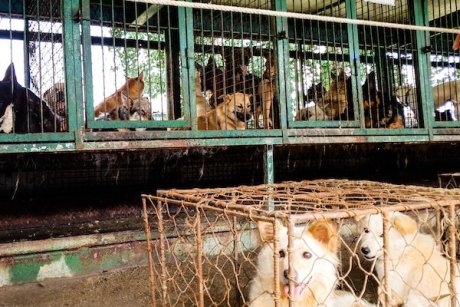 “It’s shocking to see these large-scale dog meat auctions still taking place,” Nina Jackel, Founder and President of Lady Freethinker, said in a statement. “Dogs suffer immensely in inhumane conditions as they’re raised for meat and when they’re slaughtered. The majority of Koreans do not eat dog meat, and we urge the South Korean government to end this cruel and outdated trade for good.”

Dog traders often take animals from the streets, steal pets from backyards, or buy them from owners. The animals are crammed into unsanitary cages and face a cruel slaughter either being beaten to death or hanged and electrocuted.

Lady Freethinker has sponsored 20 taxi ads in the city of Paju saying “Dogs are not food but family” and garnered over 88,000 signatures on a petition calling on South Korean leaders to end the dog and cat meat trade.