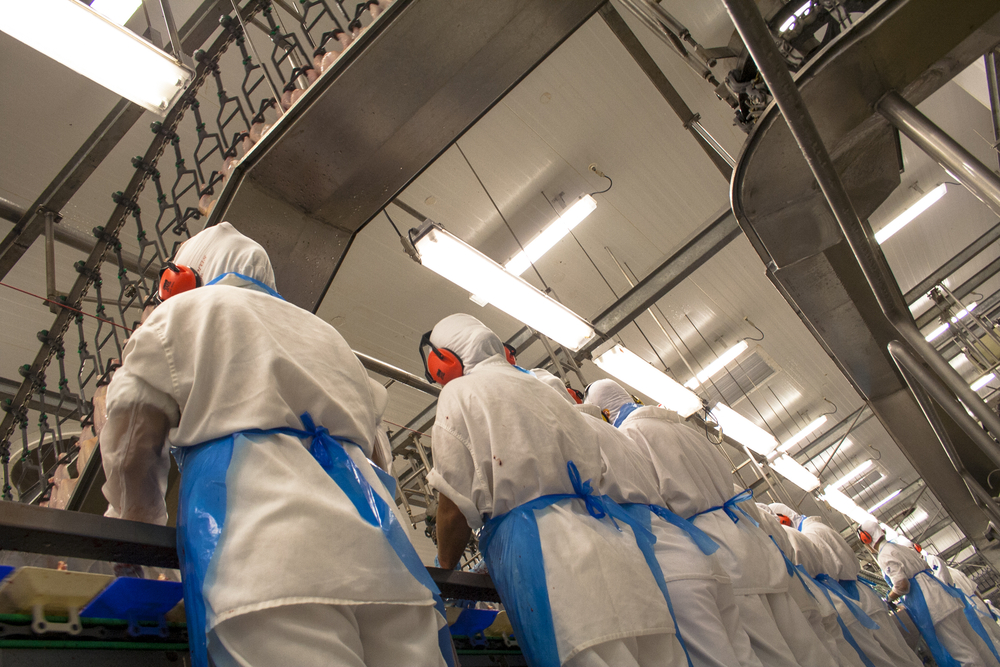 Most people are aware of the notion of factory farms, or industrialized animal agriculture, which treat living beings strictly like commodities, keep them in unimaginably filthy and cramped quarters, only to brutally slaughter them and sell their body parts for a profit. Largely thanks to whistleblowers and undercover operations, the world has become increasingly aware lf the reality of what factory farmed animals endure. According to a recent survey, nearly 50 percent of Americans support a ban on slaughterhouses and would prefer animal-free meat. However, even for those who see no problem with how animals are raised for meat, there are some alarming facts about how factory farm workers are treated that will have consciences weighing heavy next time they have a burger.

The Government is interested in speeding up the rates of factory farm processing plants for the sake of profit, which has led concerned individuals to look deeper into the serious issue of workers’ rights at these plants, and the findings are disturbing to say the least.

As reported by The Guardian, Occupational Safety and Health Administration (OSHA) records show that there are at minimum 17 “severe” incidents each month at U.S. meat processing plants, on average. What are “severe” incidents? They are classified as those which cause “hospitalizations, amputations or loss of an eye”.

Yes, amputations. According to the same data, amputations of factory farm workers happen twice a week on average. During a 31-month time period between 2015-2017, 270 amputations were recorded, with the majority being the loss of fingers and fingertips, but incidents causing the loss of hands, arms, and toes were not uncommon either. These 270 amputations are part of the 550 “serious” injuries reported. It must be noted that these stats only cover results from 22 states, so the actual numbers for the entire nation are more than likely much, much higher.

A factory farm worker, who wished to remain anonymous, shared his firsthand experience with injuries and exploitation at such facilities. “If you complain about your hands, they just say you’ll be fine … they want you to put ice on it during your break time or lunchtime … When I get home I have to stretch my hands, I feel a pinch, it hurts … You never get used to the work. I do it because I have to support my family. I don’t have an education.”

Another plant worker, Eric Fuerstenberg, pleaded with the USDA: “Every co-worker I know has been injured at some point … I can attest that the line speeds are already too fast to keep up with. Please, I am asking you not to increase them any more.”

To learn how you can limit or eliminate animal products from your diet, and thus remove your funding of such gross animal and human welfare violations, visit here.

And PLEASE make sure to SHARE these eye-opening stats with your network to help speak out for those who are being exploited!