Why It Is Crucial We Stop Cruel High-Speed Pig Slaughter – and How You Can Help! 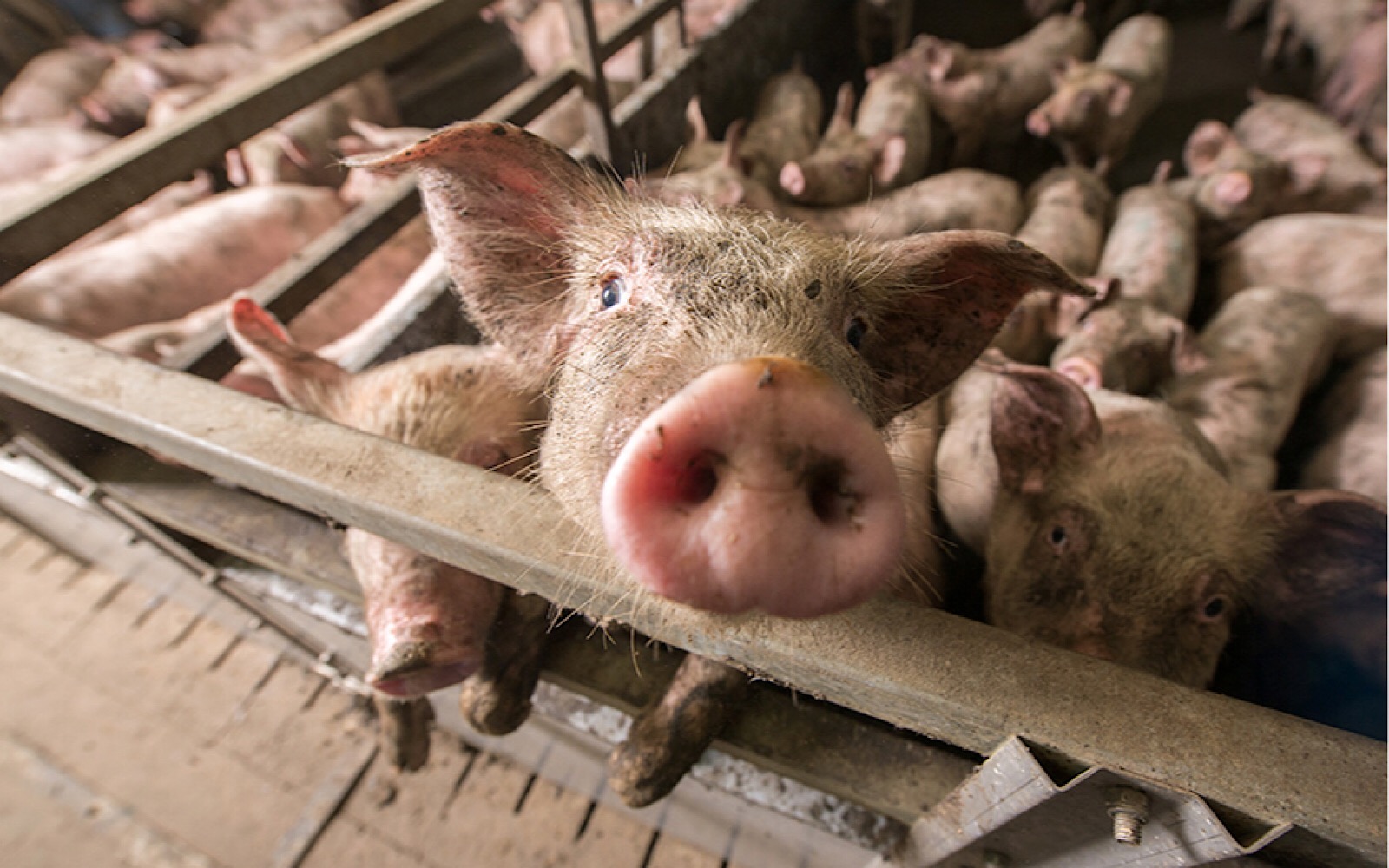 Despite a broad outcry — from the agency’s own Office of Inspector General and its front-line inspectors in HIMP slaughter plants, to a bipartisan coalition of lawmakers, and the general public — USDA appears poised to remake pig slaughter in the image of Hormel Foods. As the example of HIMP plant Quality Pork Processors, Inc. (QPP) makes clear, this would mean abuse, terror, and painful slaughter for many thousands of pigs across the country. QPP supplies meat exclusively for Hormel Foods and slaughters a whopping 1,295 pigs per hour, or one pig every three seconds. A 2015 undercover investigation of QPP revealed plant employees, under pressure to keep up with the facility’s high slaughtering speeds, illegally dragging, kicking, beating, and excessively shocking pigs with electric prods. Disabled “downer” hogs who were too sick or injured to move were abused as slaughterhouse workers tried to force them to the kill floor. The QPP investigation also documented numerous instances of improper stunning of pigs — another serious violation of federal law. A QPP supervisor who was supposed to be overseeing the required stunning of pigs was filmed literally sleeping on the job. Does this facility sound like a model for the nation?

As if this weren’t bad enough, implementing the New Swine Slaughter Inspection System nationwide also carries dire consequences for food safety. In the words of one HIMP plant inspector, “[f]ood safety has gone down the drain under HIMP.” Poorly-trained plant employees have been enlisted as on-line sorters, replacing FSIS inspectors with expertise in pathology and decades of experience in inspection — while slaughter speed increases dramatically. Reprimanded and threatened with termination for performing inspection duties too rigorously, company sorters have every incentive to ignore violations. As large pig carcasses speed by, employees miss or ignore dangerous and unsanitary contaminants, defects, and diseases — fecal matter, bile, grease, hair, toenails, cystic kidneys, bladder stems, abscesses, lesions, diamond skin, and more — allowing sullied pigs to proceed down the slaughter line to be processed into food. FSIS inspectors similarly face pressure not to stop the slaughter line to remove carcasses with contaminants, experiencing threats and retaliation both from the company and their own agency superiors.

This toxic formula has wrought dismal results. As the USDA’s own watchdog sub-agency reported, of the top 10 pig slaughter plants nationally racking up the most food safety citations in a three-year period, three were HIMP plants, and by far the most-cited plant in the country during that period — with nearly 50 percent more citations than the slaughterhouse with the next highest number — was a HIMP plant. FSIS’s own HIMP plant inspectors were so alarmed by the pilot program — and by their leadership’s repeated failure to heed warnings — that they became whistleblowers. Citing abysmal results for food safety, slaughter plant workers, and the welfare of animals, a bipartisan coalition of members of Congress further warned FSIS not to proceed with HIMP, while over a quarter million people signed a petition opposing the plan. FSIS should heed this chorus of well-placed criticism, and discard the new pig slaughter program as a failed and unlawful experiment.

While the QPP investigation revealed Hormel’s pig slaughter failings, the Animal Legal Defense Fund also gained a shocking first-hand view into Hormel’s mistreatment of pigs in its care when we obtained undercover footage from a pig breeding facility operated by The Maschhoffs, LLC, which sources pigs to Hormel. The investigator documented pigs suffering for weeks with prolapsed rectums, gaping open wounds, and bloody cysts among other illnesses. Pigs deprived of food for long periods of time became agitated and injured themselves. We called on Hormel to clean up its supply chain and protect pigs from these heinous abuses.

And in 2016, the Animal Legal Defense Fund filed a lawsuit against Hormel Foods, alleging the company is misleading consumers by advertising its Natural Choice®-brand deli meat and bacon products as “natural,” “clean,” “honest,” and “wholesome,” when in reality they are sourced from industrial, pharmaceutical-using factory farms and inhumane, unsanitary slaughter facilities like QPP. Through its “Make the Natural Choice” advertising campaign, Hormel paints a picture of sustainably-sourced, ethically-raised products that we allege bears little resemblance to its true practices and dupes consumers into believing they are buying something they’re not. Learn more about the Animal Legal Defense Fund’s lawsuit against Hormel.

The USDA is accepting public comments on the proposed pig slaughter plan until May 2, 2018. Make your voice heard and tell them to ditch this dangerous and inhumane proposal.