How Did We Get Here? The Evolution of Whale and Dolphin Captivity in the U.S. 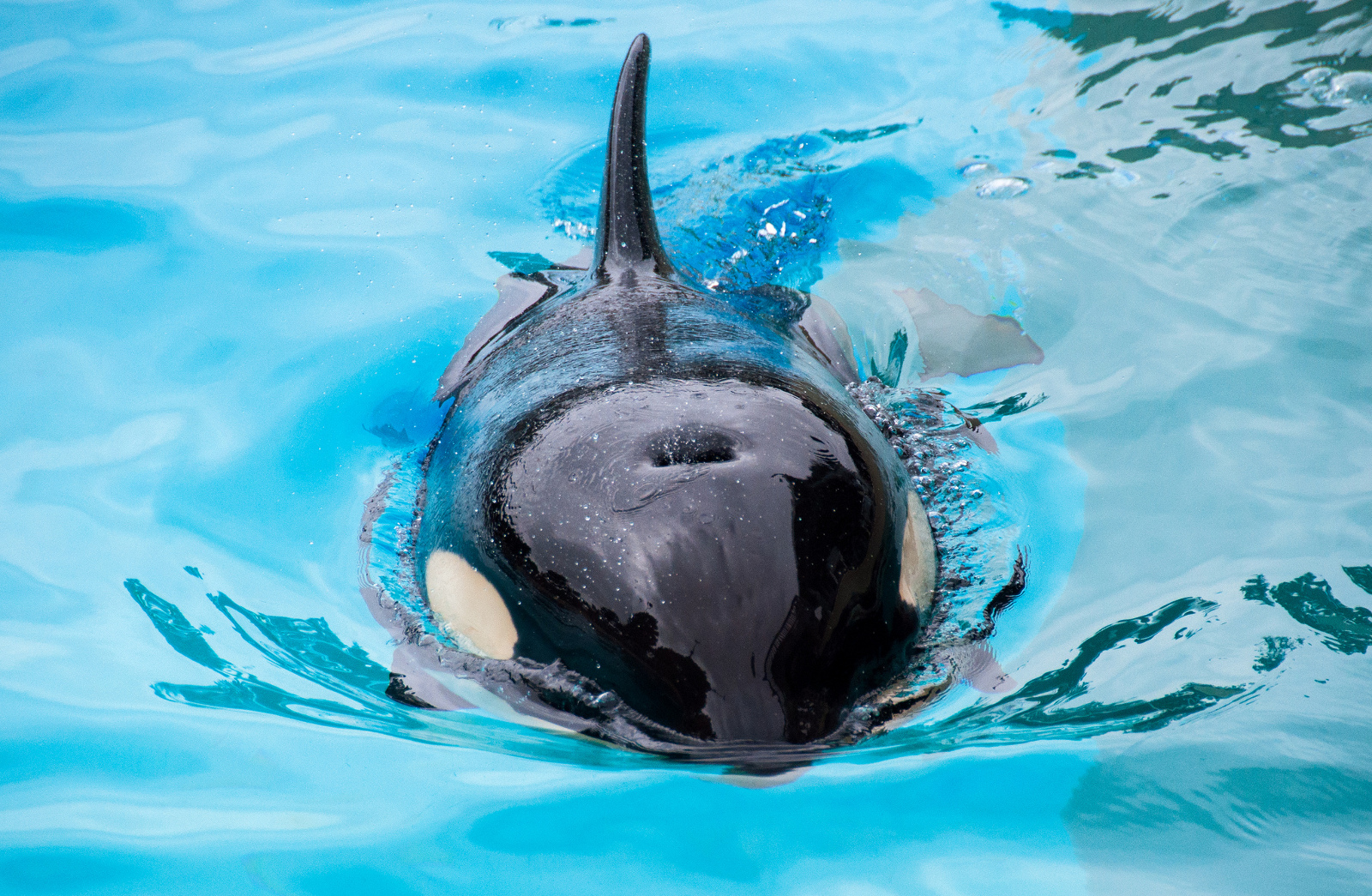 Two years ago the documentary Blackfish was released and profoundly changed the way we think about marine mammal captivity. While there are many activists, including Ric O’Barry and Dr. Ingrid Visser, who have advocated on behalf of captive cetaceans for years, Blackfish was able to open a dialog about captivity in a way that the animal rights community had never witnessed before.

Following the tragic death of trainer Dawn Brancheau, OSHA filed citations against SeaWorld recommending that trainers no longer be permitted to enter the water with captive orcas. The U.S. Federal Court subsequently ruled that SeaWorld trainers could not enter the tanks without a physical barrier separating them from the whales and since then, the debate over marine mammal captivity has escalated.

Across the globe, there are still dozens of orcas and hundreds of dolphins held in captivity that engage with trainers, and sometimes the audience, daily. They perform an array of unnatural and exaggerated tricks, but the excitement of trainers and facade of “happiness” that marine parks present convince customers that keeping these wild animals in tanks the size of fish bowls is perfectly okay.

We now know even more about how socially and mentally complex marine animals are, and separating these animals from their families and forcing them into a life where they know nothing but boredom and frustration is all the more inhumane. So we have to ask ourselves, how did we even get here? 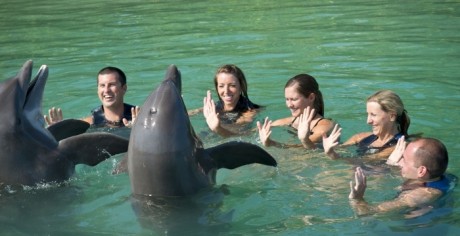 The Beginnings of Marine Captivity

Prior to the release of Blackfish, the debate over marine mammal captivity was a relatively quiet one. Companies like SeaWorld owned the market and the media for so long it was easy for them to quiet activists and scientists who spoke out against them. SeaWorld has been a leader in the fight to breed and hold marine mammals in captivity for years; they’re also some of the pioneers of capturing marine mammals.

Marine mammal captivity spans a far greater period of time than what most marine parks lead the public to believe. It also entails a violent and discreditable past they would rather the world not see. In the 1860s and 70s, beluga whales and dolphins were being captured and shipped to aquariums throughout the United States and Europe. Marineland of Florida, previously Marine Studios, opened in 1938 and was home to the first captive born bottlenose dolphin in 1947.

By the 1960s, wild-capture whaling was underway and with little regulation. Orcas were a hot commodity and were being captured with the help of high-speed boats and large nets, violently forced into submission. Exhausted and traumatized, those that lived through the ordeal were taken from their families, the life that they knew, and shipped to marine mammal parks around the globe.

Between 1970 and 1971, ten orcas were captured from the Puget Sound off the coast of Washington state. Half of the animals were sent to SeaWorld, one (Lolita) was sent to Miami Seaquarium, and the other four were dispersed internationally. With the exception of Lolita, all of these orcas died prematurely in captivity. In the 15 years that followed this new wave of live-capture and export, up to 307 whales were captured, 13 died during the violent capture process, 55 were sent to aquariums.

Around this time, the – now infamous – Taiji dolphin drives began. In these drives, fishermen use high-speed boats to corral entire pods of dolphins. Some of the “good looking” dolphins are captured and sold into captivity while the rest of the dolphins are brutally slaughtered for meat. While it is now illegal to import wild caught dolphins in the U.S., this was not always the case. 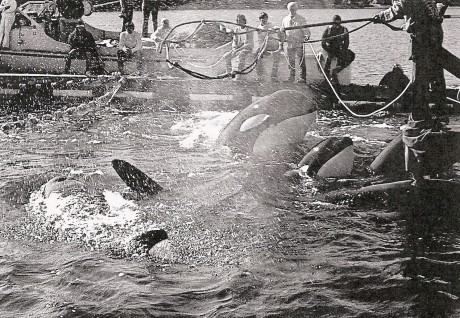 During the mid-1970s, the public began to question the ethics of live-capture and the captivity industry as scientists and activists began to understand the complexities of marine mammals.

In 1972 the Marine Mammal Protection Act was passed in an effort to shield wild and captive animals from harm. However, as of 1994, this piece of legislation states that any entity offering, “an education or conservation program based on professionally recognized standards of the public display community,” can, without legal repercussions, import and breed wild marine mammals.

After years of wild-capture expeditions, Washington became the first state to ban the capture of orcas in 1976. In what would become a historic trend for this corporation, SeaWorld opposed legislation that would protect orcas from being captured in U.S. waters.

Internationally, orcas and other whales are still captured from the wild and sold into captivity. The Convention on International Trade in Endangered Species (CITES) regulates the trade of orca whales and dolphins; however, since they are not classified across the board as “endangered,” their trade does not need to be controlled. CITES also only has a limited ability to regulate the trade of cetaceans across country borders, meaning if individual countries approve permits to import animals, they can be traded at will. 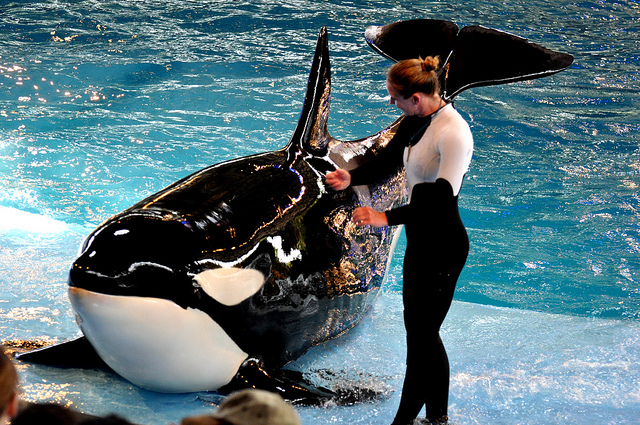 What is the Purpose of Captivity?

SeaWorld and their affiliates have long defended holding marine mammals in captivity, they cite the educational benefit holding these wild animals captive serves. Although knowledge and education generate compassion and ultimately benefit conservation efforts, there is very little evidence to show that watching cetaceans perform elaborate routines and tricks does either of those things.

If anything, ignoring the history of how marine mammal parks got to where they are today and opting to focus on the individual history of an animal instead of the natural history of the species as a whole only further perpetuates the problem and the ideology that marine mammals should be kept captive for mere entertainment.

SeaWorld, and other marine parks, are quick to refute any claims that their animals are stressed (despite evidence of unnatural behaviors and acts of aggression) by arguing that their animals reproduce, and in order for this to happen, their level of stress must be minimal.

Although marine parks have had very successful breeding programs since the 1940s, artificial insemination is commonly used. This, we are sure, is far from a natural behavior.

Animal welfare advocates are at times told that they’re “extremists,” leading emotionally fueled arguments for the release of these animals. Although we admit this whole captive situation bothers us, that perspective blatantly ignores the countless scientific studies and papers that have been published by well renowned scientists and biologists stating, without hesitation, that cetaceans are sentient beings that live complex emotional lives, experience a range of emotions similar to humans; and that captivity, simply, is harmful to their well-being.

What Have We Learned and What More Can We Do?

SeaWorld, as far as we know, has not captured or imported a wild orca or dolphin in years. In 1992, the federal government blocked the import of dolphins from Taiji to Six Flags Discovery Park in Vallejo, CA after a complaint was filed, citing the Marine Mammal Protection Act. Later, in 1993, three Pacific White-Sided dolphins were captured off the coast of California, the public backlash from these captures made them the last in U.S. waters. However, just because wild capture have ended in the U.S. does not mean that the captivity industry will die off anytime soon.

Marine parks in the United States rely heavily on their breeding programs. Former SeaWorld CEO, Jim Atchison, once stated that they could easily create more parks with only four or five whales, thanks to their captive breeding program.

Marine parks often claim to be focused on conservation and rehabilitation of marine mammals, but they’ve simultaneously created their breeding programs, particularly of orcas and dolphins, to spawn a surplus of animals that can be shipped back and forth between parks, whenever necessary, with no intention of ever releasing them to the wild (not that they could). The monetary value of these animals, it seems, voids any real commitment to conservation or welfare.

The capture of marine mammals is still very prevalent in other parts of the world. While tides against marine captivity are beginning to turn in the U.S., SeaWorld plans to expand into international markets where people are “less sensitive” to marine captivity. The only way we can prevent this from happening is to raise awareness for the plight of marine animals and show the world that there is nothing entertaining or educational about systematic torture.

If you’d like to get involved, especially if you live in a state with a marine mammal park, urge your local representatives to support marine mammal legislation like AB-2140. There is still hope for the end of marine captivity, but based on history it is clear that the industry is not going to be the one to put an end to this cruelty. Above all, boycott marine parks at all costs and share what you have learned, far and wide. Let’s empty those tanks!