Ending the Dog Meat Industry in South Korea: A Journey of a Million Tears

It was for the first time, six years ago, that I visited Moran Market, South Korea’s largest dog meat market. As someone who has always loved dogs and has never questioned that they are indeed “my” best friend, if not “Man’s,” seeing dogs waiting for their moment of slaughter was horrifically surreal and painful to witness. That moment when a trader opened the cage and threw a noose over a dog’s neck, dragging it to its death is burnt in my mind. I closed my eyes, weeping silently, and wished more than anything that I could take the dog’s pain away. Hoping that somehow each dog knew that I was with them and that I cared. That I could see them and that their pain hurt me so very deeply. I wanted to be able to tell them that they mattered to me and that witnessing their suffering would change my life forever – that their suffering wouldn’t be in vain.

That cold morning in Seoul I made a promise that has changed my life. I promised that I would carry on fighting until dogs were no longer valued for the meat on their bodies. Their beautiful broken bodies that had endured so much suffering before they even arrived at the heartless market.

Dogs for sale outside a “health store” in one of Seoul’s dog meat markets. 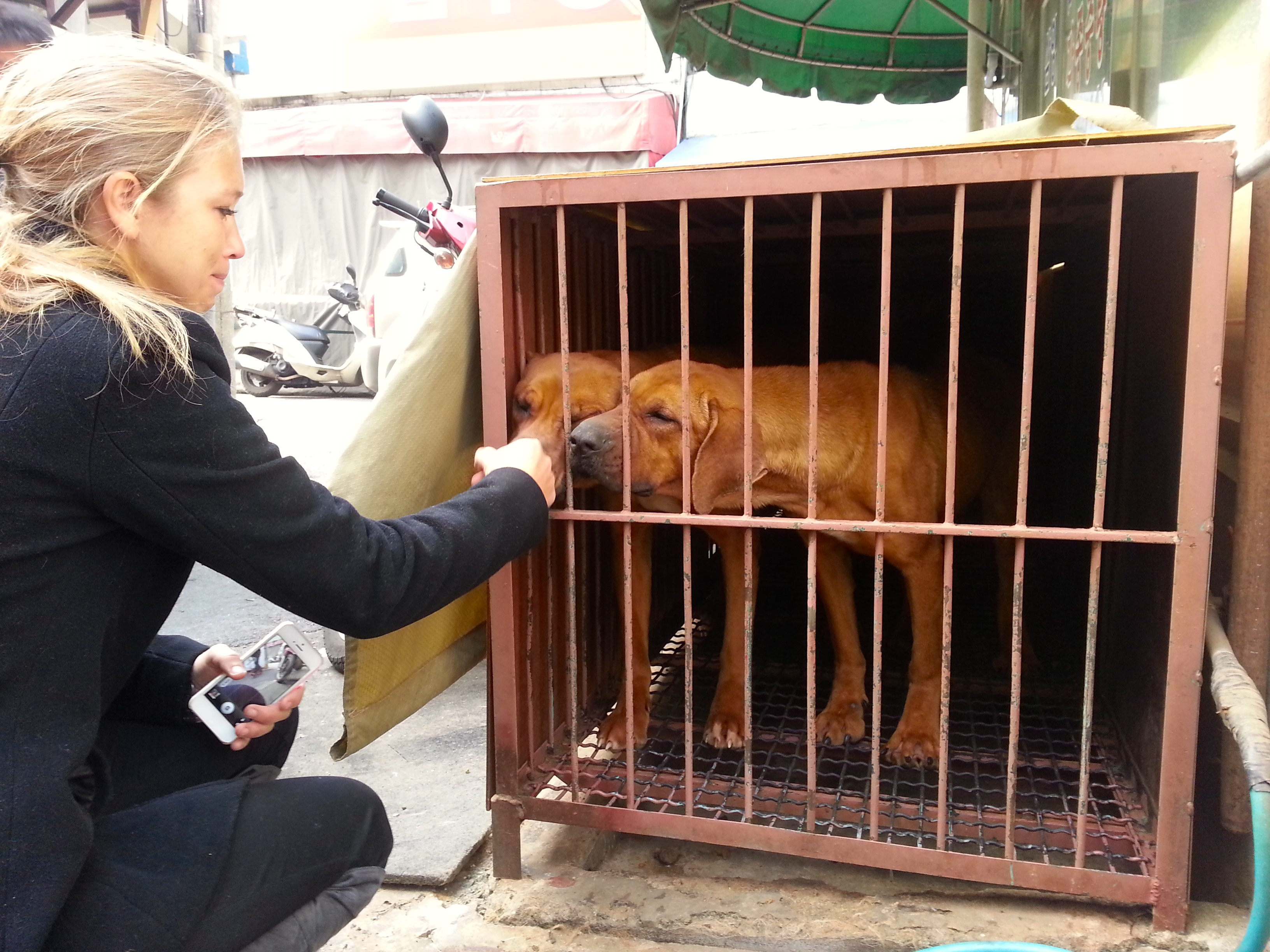 The majority of dogs sourced to supply South Korea’s dog meat markets, restaurants, slaughterhouses and “health stores” come from dog meat farms. There are thousands of these farms throughout South Korea, ranging from small backyard enterprises, housing a small number of dogs, to intensive farming facilities containing thousands of dogs. Regardless of the size of the farm, the suffering of the animals is the same. Throughout their short lives there is no reprieve, no moment of happiness or absence of fear. It is a pitiful existence that has a brutal end. 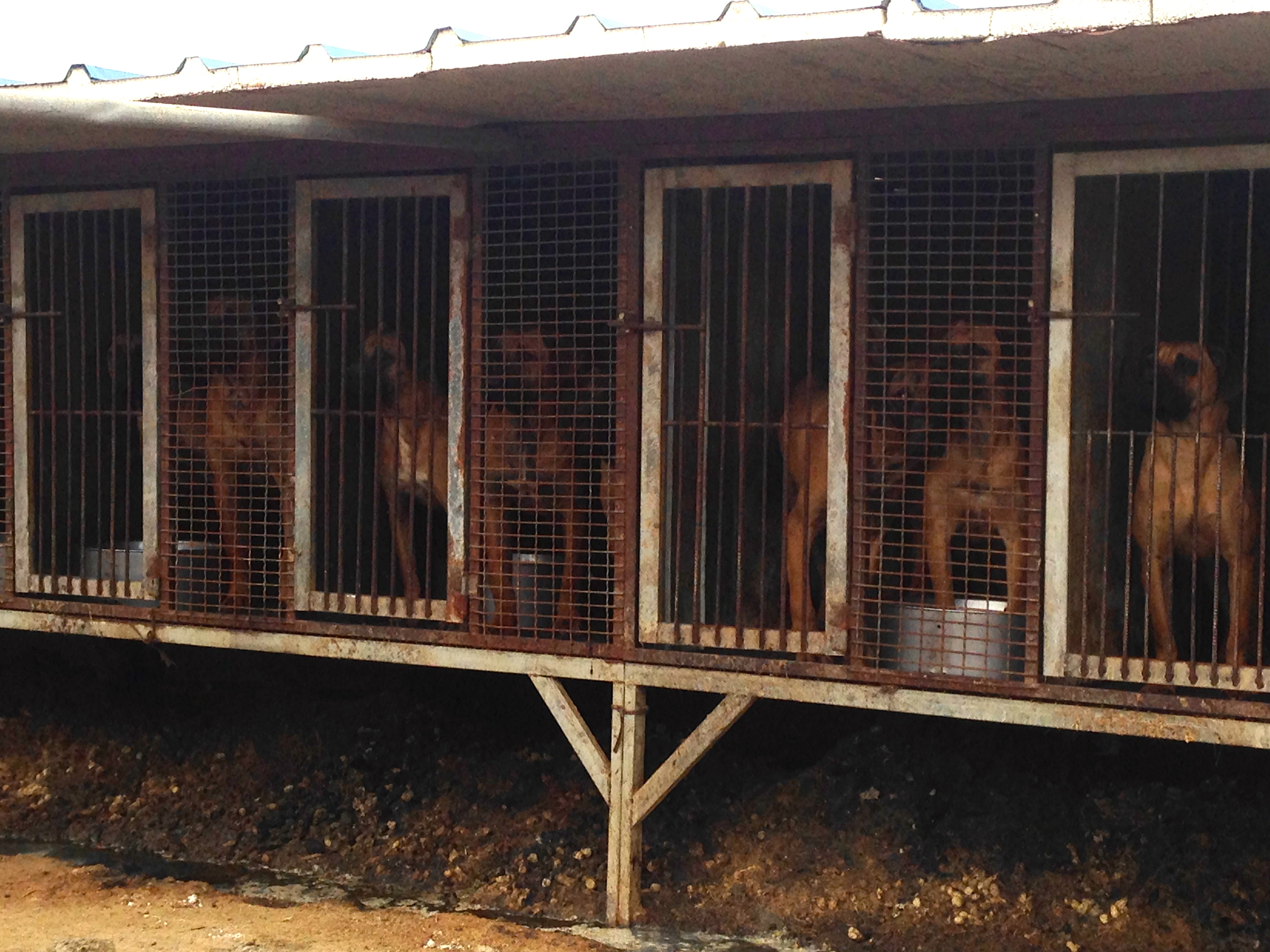 I also remember everything about the first time I visited a dog meat farm. The smells, sounds and the sight of faces peering out from the bars of the cages were overwhelming. The sadness I felt was suffocating. I walked away and I wept. The sense of hopelessness, combined with the need to do something NOW, felt overwhelming. Walking away from suffering and misery does not sit well in my heart or soul, and it filled me with a shame that was going to destroy me or make me fight harder.

And so, when failure is not an option, you fight. You fight for the lives of these animals as though you are fighting for your own life. The only thing you know for sure is that giving up is not an option and that you need to act now, because tomorrow will be too late for so many dogs…

Change For Animals Foundation was founded so that there would always be an organization that would fight for an end to the suffering of the dogs in South Korea. We will continue no matter how difficult it gets, and no matter how impossible or distant that victory might feel. It’s a hard campaign – one that requires tenacity to change both the societal and legal status of dogs, so that all dogs are viewed equally in people’s hearts and within laws designed to protect them.

A dog peering out from its cage on a dog meat farm near Seoul.

It took years of research and investigations to gain a full understanding of the dog meat industry in Asia; to determine the motivations, drivers, and the changing culture, building up invaluable relationships and gaining the trust of people within the industry. Over this time, the heartbreak of seeing these dogs and witnessing their horrendous suffering has been immeasurable.

Yet, at the same time, we have had many victories. And each one has given us the strength to bandage up our broken hearts and carry on.

The launch of the “Stop It!” anti-dog meat campaign by CFAF, CARE and Animal Guardians in 2013. 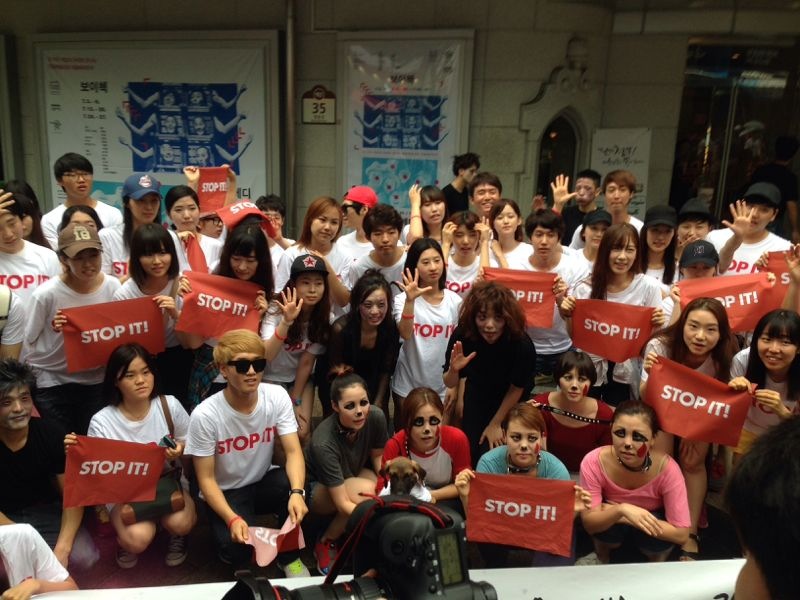 The support of our small, yet determined, army of amazing online supporters from around the world, enables us to continue to create this lasting and positive change.

The demand for dog meat in South Korea is decreasing, particularly amongst younger generations where pet ownership is rising exponentially. As a wonderful example, the country’s longest-running dog meat restaurant closed in 2014, after 33 years of operation, as customers were said to be turning away from eating what are now widely viewed to be companion animals.

Thanks to local groups and inspiring individuals, the animal rights movement is the fastest growing civic campaign in South Korea, increasing in strength and numbers each year.

We are also seeing an astounding change in those involved in the industry – dog meat traders, farmers, and restaurant owners – who are reconsidering their livelihoods and changing their opinions. I have met many dog farmers and traders, yet none of them has shown pride in their job, each one expressing remorse for the dogs who have suffered at their hands. They tell me they are ready to leave the industry but need help to do so.

CFAF knows that change will be the most effective when it comes from within, so we are committed to working with those in the industry who want to bring the trade to an end. By showing industry workers that there is a way out and by uniting our calls to the government for support to end the trade, as well as presenting sustainable and viable alternatives, we can and will end the dog meat industry. We always work in partnership with local and international animal protection groups and individuals where possible, because we believe the fastest change will come from a unified movement. And part of our current essential activity involves supporting farmers who are ready to close their farms, and helping traders who want to leave the industry and transition to humane trades.

And our approach is working!

Dog farms are being closed down and hundreds of individual animals have been saved from a cruel fate – they have been rescued and have begun new lives of freedom, love and compassion.

Gillian was rescued from a dog meat farm in July 2015.

Over the last six years, I have visited South Korea countless times. I always go there with a heavy heart because I know it will hurt to bear witness to the pain of these animals. But leaving hurts even more. Leaving so much suffering behind that I couldn’t fix there consumes my being. But CFAF will always go back. And we will always fight to end the whole industry, while saving as many individual animals as we can on the way, because each and every individual animal in this world matters.

CFAF’s ambassador dog, Django, is a breed considered to be a ‘meat dog’ in South Korea. He was rescued from a dog meat farm in June 2013 and now lives with Lola and her family. 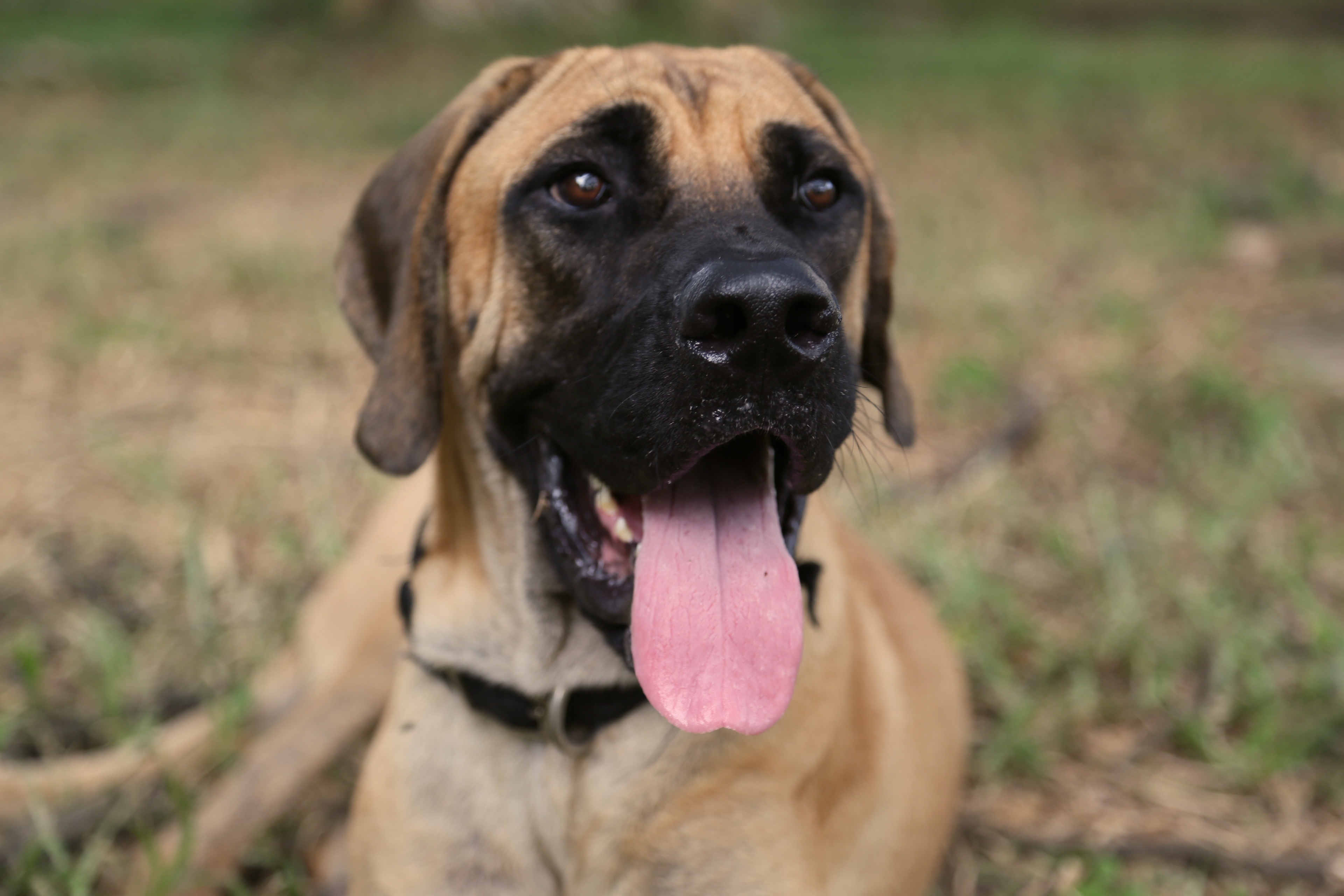 Given that this story started in Moran Market, I will end it here too. But I will end it with a story of hope… With the story of “Nun” (meaning “snow” in Korean):

It was a cold afternoon in January a couple of years ago in Moran Market. It was snowing and already dark. We were about to leave when I saw a dog darting through the parking lot at the front of the market, only about 65 feet away from the dog meat traders. She was terrified and, as I approached her, she hid under a car. I pleaded with her to come out and promised her she would be safe if she would just come to me… I crawled under the car to her and held out my hand. She licked it. I coaxed her out and we got her in the car and drove away…  Nun (or “Nunnie” as we called her afterwards) was one of the breeds considered to be a “meat dog” in South Korea. She had likely somehow managed to escape from the traders. Just like that, bundled into our car and safe in my arms, the dog meat industry ended for her. I remember thinking as we drove away, “how did someone so beautiful end up somewhere so awful.” Nunnie is now living in the U.S. and is doted on, being treated with the compassion and love she deserves … and that all animals do. To me, she will always be a miracle and a symbol of hope.

Nunnie moments after being saved from Moran Market. 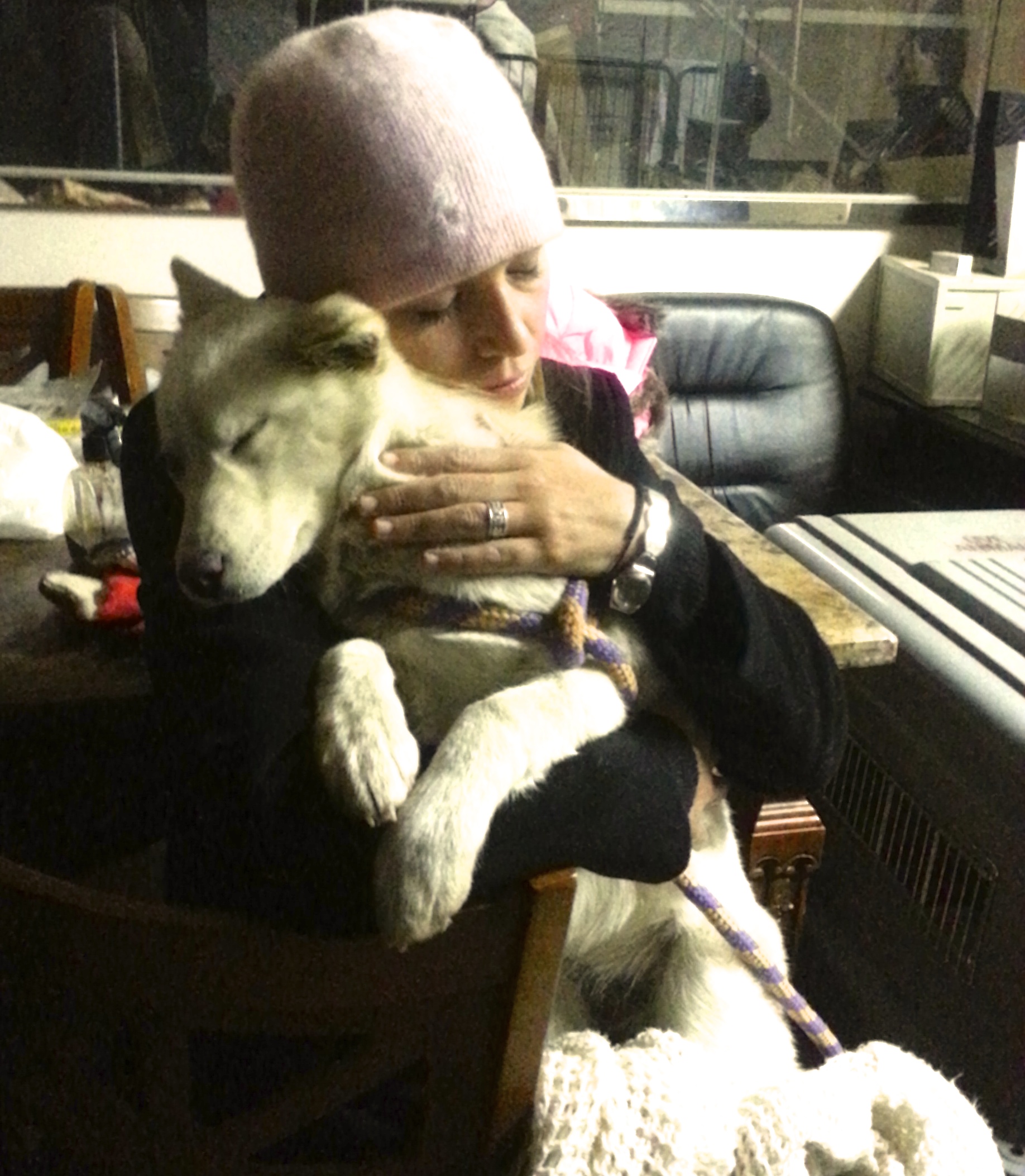 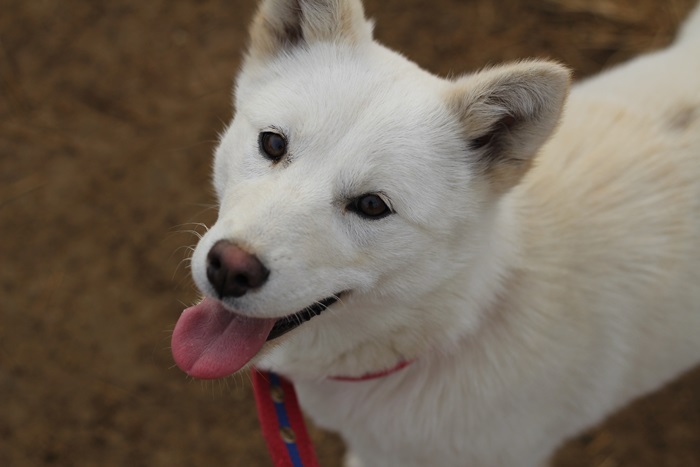 I am often asked if I truly believe that one day the dog meat industry will end in South Korea. It always seems like an odd question to me because for us at Change For Animals Foundation, it’s not a question of “if,” but “when.” I always respond with a resolute “YES!”