Dogfighting Persists—But Here’s How We Can End It 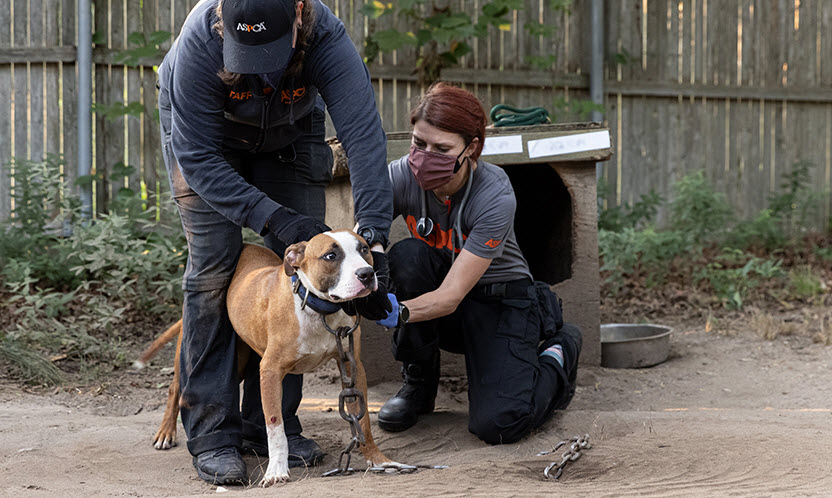 On the weekend of July 31, 2021, the ASPCA assisted the Suffolk County District Attorney’s Office and Police Department in the raid of a large-scale dogfighting operation spanning Long Island, New York City, and several other states.

The collaboration resulted in the arrest of 10 people and the seizure of 89 dogs, who were found outdoors and in basements, garages, and sheds—some without food and water. Several animals exhibited extremely fearful behavior, and many had medical conditions consistent with dogfighting, including scarring and broken teeth.

This investigation, which started in 2019, uncovered a range of dogfighting paraphernalia, including “rape stands” used to immobilize female dogs during breeding; electric cords used to kill underperforming dogs; “break sticks,” which break fighting dogs apart by their mouths; and equipment and drugs used to improve fighting dogs’ endurance, tenacity, and strength.

Most of the dogs were relocated to an ASPCA emergency shelter, where they are receiving veterinary forensic exams, behavior evaluations, medical care, and behavioral treatment and enrichment from our experts. We also supported the case with operational planning, expert handling, evidence collection, and legal assistance, including expert subject matter consultation.

I oversaw our anti-cruelty fieldwork from 2009 to 2013, an experience that opened my eyes to the plight of victimized animals in a way I could never have fully understood otherwise. I consider dogfighting the ultimate human betrayal of animals, converting their inherent loyalty into obscene physical and psychological brutality.

While we often view these interventions case-by-case, it’s just as important to view them holistically, in terms of both the pervasiveness of dogfighting in America and the unique roles local and national animal welfare organizations play in working to end it. 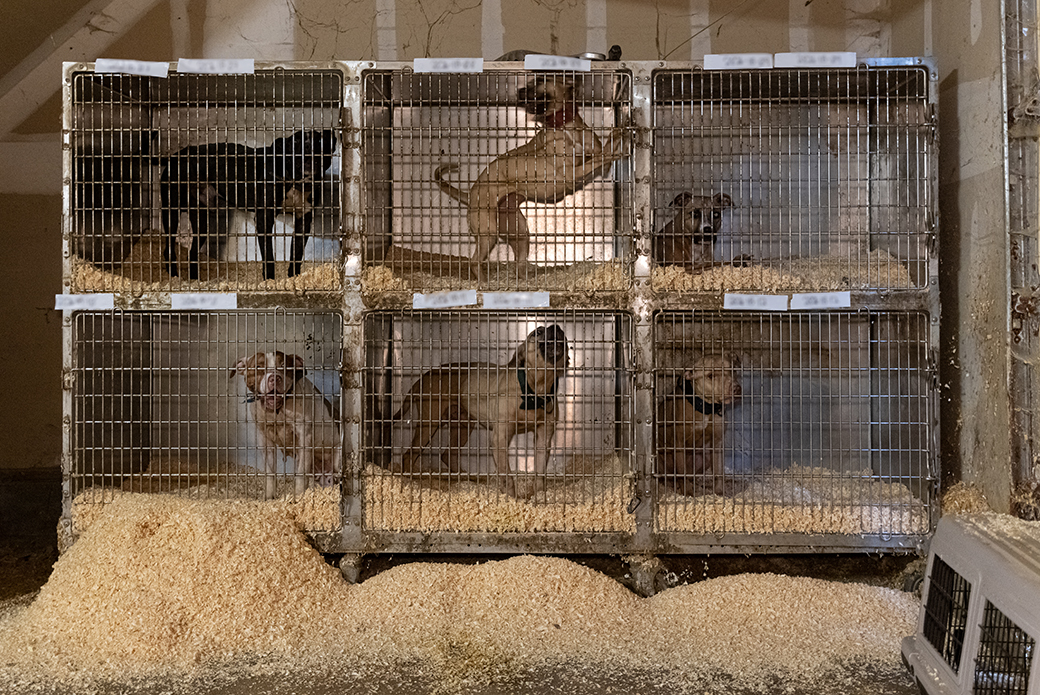 Many people see dogfighting as a relic of our past or a phenomenon that ended when Michael Vick was arrested more than 14 years ago. But poll results we released three years ago found widespread misperceptions about the prevalence of dogfighting, where it happens, and the types of people committing these crimes.

The tragic reality is that dogfighting occurs more often and in more places than most people think—we’ve participated in raids ranging from Alabama farms to New York City basements—and is more horrific than most can imagine.

We estimate that tens of thousands of people fight dogs—representing a wide variety of socioeconomic conditions—and their activities are often connected to other crimes, including gambling, illegal drug sales, and illegal possession of firearms.

Demonstrating the scope of the challenge, the ASPCA has supported more than 300 dogfighting cases in at least 24 states since 2009, assisting nearly 6,000 victims of dogfighting. These operations include the largest and second-largest dogfighting raids in U.S. history.

Next Steps for Rescued Animals 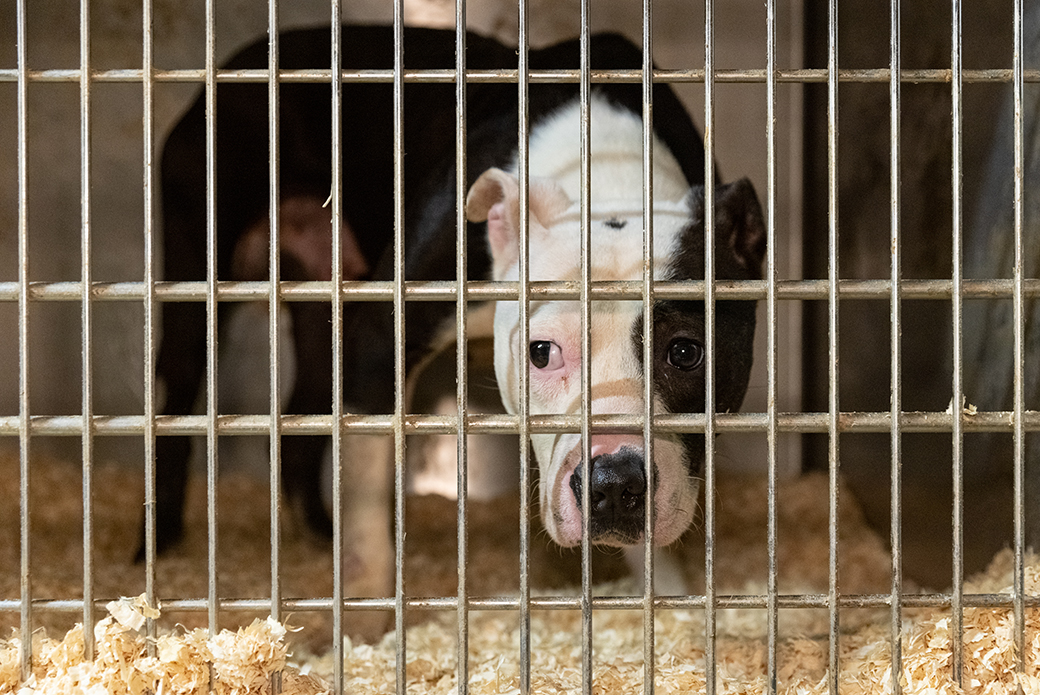 Once dogs are rescued from fighting situations, the most expensive and challenging work begins. Caring for animals seized in large-scale dogfighting operations can be so prohibitively expensive that most animal welfare organizations cannot afford to assist prosecutors and law enforcement, which may deter those agencies from initiating new animal fighting investigations.

The full range of critical contributions to a dogfighting case goes beyond rescuing dogfighting victims. For example, our forensic sciences team deploys to animal crime scenes to locate, preserve, and analyze physical evidence critical to cases. Our behavioral sciences team evaluates each dog to support the prosecution and help identify appropriate placements for each dog. And our legal advocacy and investigations team provides essential support to investigators and prosecutors, including subject matter expertise, securing search warrants, assisting with evidence review, and identifying appropriate criminal charges. 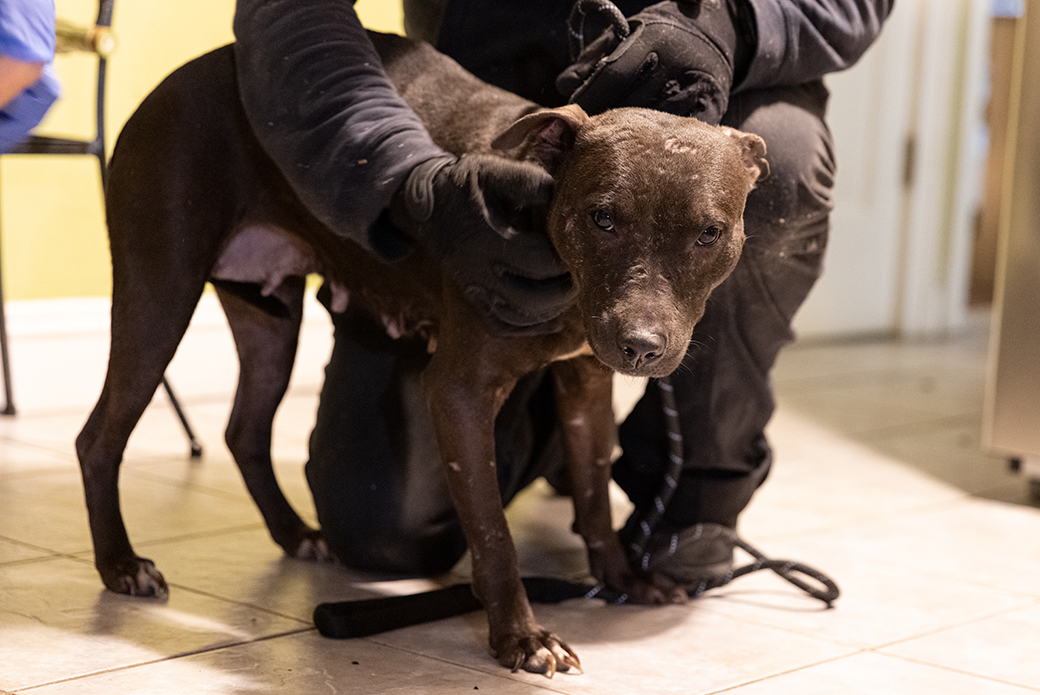 The good news is that clear progress has been made that can serve as points of inspiration. For example, more than 10 years ago, it was common for dogs seized in dogfighting cases to be immediately euthanized due to the perception that they’re inherently or permanently aggressive and dangerous. Now, many jurisdictions recognize the importance of evaluating dogs as individual animals, and placement decisions are based on their behavior, not their background or circumstances. The fields of forensic science, legal advocacy, and animal behavior assessment and rehabilitation have also evolved dramatically.

We’ve also seen significant legislative advances. The crime of dogfighting became a felony in every state by 2008, and in 2014, Congress passed the Animal Fighting Spectator Prohibition Act, making it a federal offense to knowingly attend an organized animal fight and imposing penalties for taking children to animal fights.

In 2016, the U.S. Sentencing Commission increased the federal sentencing guidelines for animal fighting and revised their guidelines to explicitly state that causing harm to animals and performing acts of extraordinary cruelty are grounds for imposing longer sentences.

More recently, we’ve been working very hard on “cost of care” laws at the state and federal level, including our support for the Help Extract Animals from Red Tape (HEART) Act, which would help rescue organizations cover the enormous expenses associated with caring for victimized animals, including emergency sheltering, veterinary care, behavioral assessment, and rehabilitation from trauma.

Even with these advances, the Suffolk County case demonstrates that there’s still much work to do. That work relies on national and local organizations, agencies, individuals, and communities recognizing the strength of our united purpose and the value of our unique contributions. When the animal welfare movement works together and is supported in full, I believe we can eradicate dogfighting from our culture once and for all.

I thank all animal welfare advocates working to stop animal cruelty in all of its forms and invite you to learn more about dogfighting—including how to spot it happening in your community—by visiting our dogfighting awareness page.