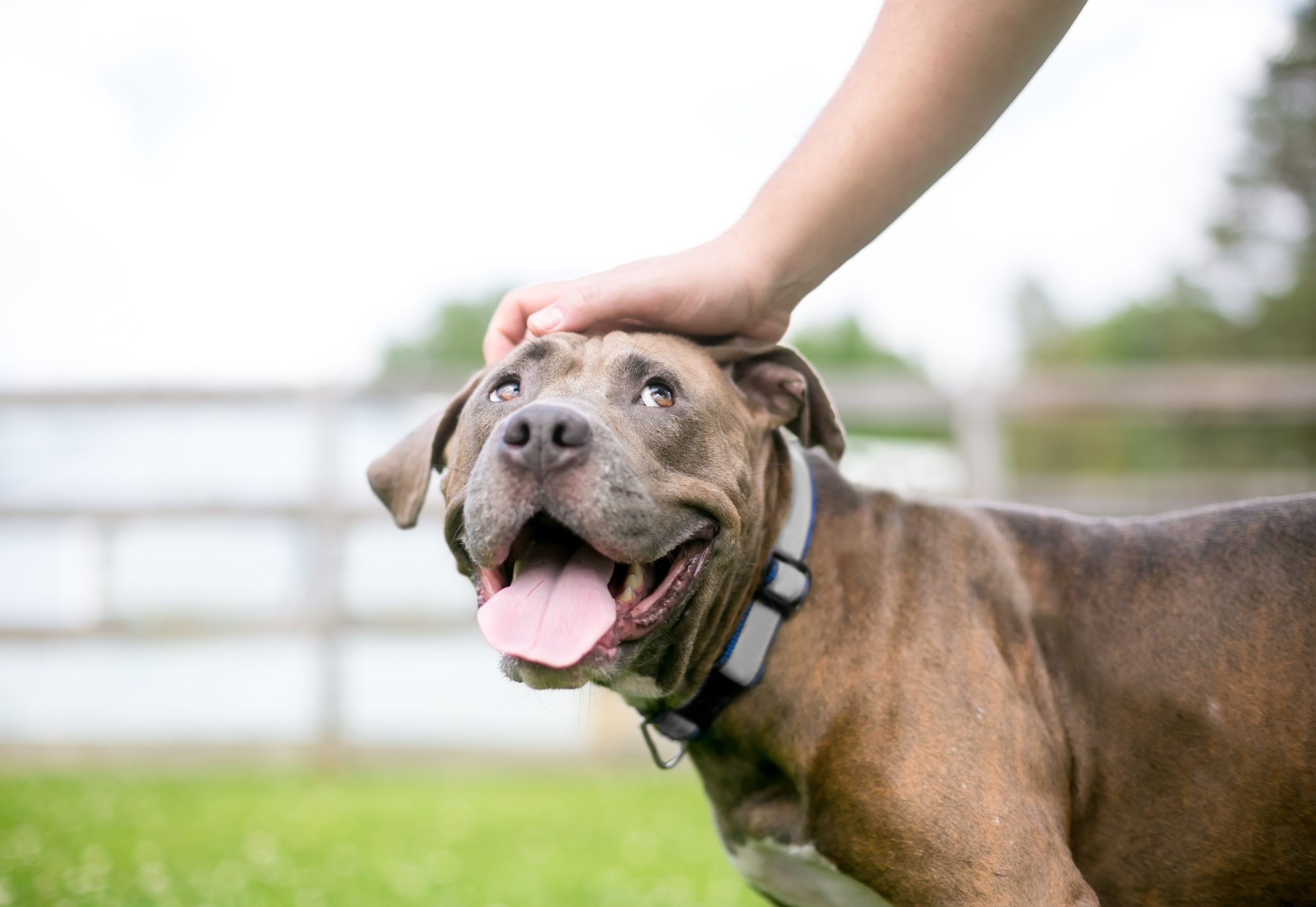 Dog fighting is illegal in the US, however, it is still very common. The dogs in these rings are often given steroids, starved, and trained to be aggressive for the fights. In order to train them, people offer up dogs as live bait, hence the name “bait dog.” These dogs are usually the ones who are the least aggressive and refuse to fight. They are attacked over and over again, resulting in terrible injuries that they don’t get a chance to recover from. Winners fight for years and then are overbred until their deaths. Losers are left to suffer and die.

Pit bulls are most often the dogs used in these rings and while people may assume it’s because they are naturally aggressive; that is not the case. Pit bulls are actually very loving and trusting dogs. Their negative reputation comes from people using them for fighting; not the other way around.

Sadly, most dogs used in dogfighting rings that get busted are taken as evidence and then euthanized. Here are 10 rescues of dog fighting dogs that got a second chance at life.

1. Karma is the Best, Most Snuggly Sister to Her Human Siblings

When police raided a house looking for drugs and guns, they found something unexpected: a room full of dogs used for dogfighting. Karma was one of these dogs and when  Christina Puglisi heard about her, she knew that she had to foster Karma. However, Karma was such a great dog, that Christina knew she had to adopt her too. Karma loves to snuggle and give kisses to her human siblings. They are best friends and love each other so much.

Penelope was found walking along a remote road, starving, covered in wounds, and obviously in immense pain. The teen who found Penelope brought her to the Marion County Humane Society, where she was treated for all of her injuries and given immense amounts of love. From the various old and new wounds, they knew that Penelope had been a bait dog in dog fights. Despite her traumatizing past, Penelope opened up immediately to everyone and gave them more love than she had ever been given. This sweet pup was adopted in June by a family that gives her lots of love, care, and snuggles.

3. Oogy: The Inspirational Bait Dog Who Had So Much Love to Give

Like Penelope, Oogy was a bait dog before he got rescued and adopted by his family. When his owner, Larry, first saw Oogy’s face, covered in wounds and half of it just pink scar tissue, he thought that Oogy had been in a fire or some terrible accident. The doctor informed Larry that Oogy had actually been bait dog and after suffering such severe injuries had been left out to die. Even though Oogy had faced so much hardship and had never known love before, he had so much love to give. When Oogy first met Larry’s sons, he ran up and started kissing the boy. Oogy was so easy to fall in love with. Larry adopted the loving pup and even wrote a book about him, hoping that Oogy’s resilience would inspire others too. Sadly, Oogy passed away in 2015, but he was surrounded by people who gave the kind of love that he always deserved.

4. King Edwin, Saved from a Dog Fighting Ring, Is Ready For Love

King Edwin was one of the thirteen dogs rescued from Chicago police departments bust of a major dogfighting ring. He was emaciated, covered in various scars and scabs, and had a sunken eye socket. Despite his roughed-up appearance the traumatic experience that it caused it, King Edwin was happy, excited, and trusting of those were there to take care of him. The rescuers did not only change Edwin’s life, he changed theirs too. Edwin passed away a few years ago, but his rescuers promised him that they would continue saving the lives of dogs like him and he would always be in their hearts.

5. Terrified After Dog Fighting, Felon Learns How to be a Dog from His New Friend, Envy

When GinaMarie decided to adopt a dog, she knew that she wanted to find one that was usually considered “unadoptable.” When she found out about Felon, she knew that he was the dog for her and instantly fell in love. Because of Felons’ rough past in dogfighting, his body was covered in wounds, his ears were slit, and his emotional wounds were just as deep. He was terrified and would easily get defensive, but GinaMarie refused to give up on him. She asked her dad to bring over his dog and Felon instantly perked up. GinaMarie decided that in order for Felon to live happily and without fear, he needed a canine companion. She took Felon to the shelter and he had an instant connection with a dog, whom GinaMarie named Envy. They became the best of friends as Envy taught Felon how to have fun and let down his guard.

Michael Vick’s dog fighting ring is one of the most well-known cases due to his celebrity status. While many of the forty-seven dogs that were rescued from his dog fighting ring have passed, there are a few that are still living with their loving families. Johnny Justice is one of those dogs. He lives in San Francisco, where he’s a therapy dog in a children’s literacy program. He loves getting pet and playing with Ginger, another dog who was rescued from Vick’s ring.

7. After Years in a Dog Fighting Ring, Honey Finally Gets to Experience Love

To say Honey had a rough life is an understatement. When Human Society was called in to help Police deal with a dogfighting ring, Honey was huddled in a corner. She was old, which means she had survived many years of fighting. She was covered in wounds and even had part of her lip missing. It’s no surprise that at first, she was a bit wary of humans; however, she soon was able to trust that the people were there to save her and give her love. She was just as ready to get love as she was to give it. Honey was adopted by a loving family and finally got her happy ending!

8. Bulletproof Sam Finally Meets Humans that He Doesn’t Have to Fear

Bulletproof Sam was one of the seventeen dogs that the Humane Society found during a dogfighting raid. They found him cowering in a tiny cage with half of his face missing. Despite all of the suffering that had obviously endured, Sam soon realized that he didn’t have to be afraid of these people. All he wanted was affection. The rescuers gave him big hugs and brought him over to the Hello Bully Halfway House in Pennsylvania to help him adjust. Then the sweet boy was adopted by his furever family!

9. Precious, a pit bull on the Brink of Death, Makes a Miraculous Recovery

While helping a dog in South LA, Addie, the Rescuer and Founder of Love That Dog Hollywood received a call about another dog that was in severely bad shape. Addie resolved to find this dog and rescue her. She found Precious on the brink of death: bleeding out, emaciated, unable to walk, and without ears. She didn’t think that Precious would even make it through the day, but she knew that she had to try to help her. It took two years but they were finally able to rehabilitate Precious for adoption. Previous went to No Kill LA and was adopted into a loving home!

10. Left for Dead in a Dog Fighting Ring as a Puppy, Jax the Pit Bull Makes an Amazing Recovery!

In 2015, a five-month-old pit bull puppy wandered onto someone’s porch and collapsed. The homeowners called Unleashed Pet Rescue, who took the poor pup in and named him Jax. Like all dogfighting dogs, Jax had wounds all over his body. He had punctures on his head and neck, and couldn’t even walk. Still, Jax wagged his tail and fought to recover. After two weeks in the intensive care, Jax was placed with a foster. The pup who couldn’t even walk when he was first rescued, was not jumping, running, d playing around. He seemed to be so happy to be alive and with people that would never hurt him.

These stories demonstrate the extremely cruel and sad world of dogfighting as well as the resilience of dogfighting dogs. Despite all of the pain and torture that they suffered, these dogs (and many others) still trust humans and are eager to both give and get love from them.

We’re so glad that these dogs were able to be rescued and got to finally experience affection and care. Sadly, there are so many dogs that do not get this opportunity. If you suspect a case of dog fighting, report it and provide as much information as you can. These dogs need someone to speak up for them and help them get rescued.

These stories demonstrate the extremely cruel and sad world of dogfighting. We’re so glad that these dogs were able to be rescued and got to know love and affection during their lives.

Sign this petition to Ban Animal Abusers from Owning Animals and Working with Them!