Can Horse Carriages Ever Really Be Romantic? 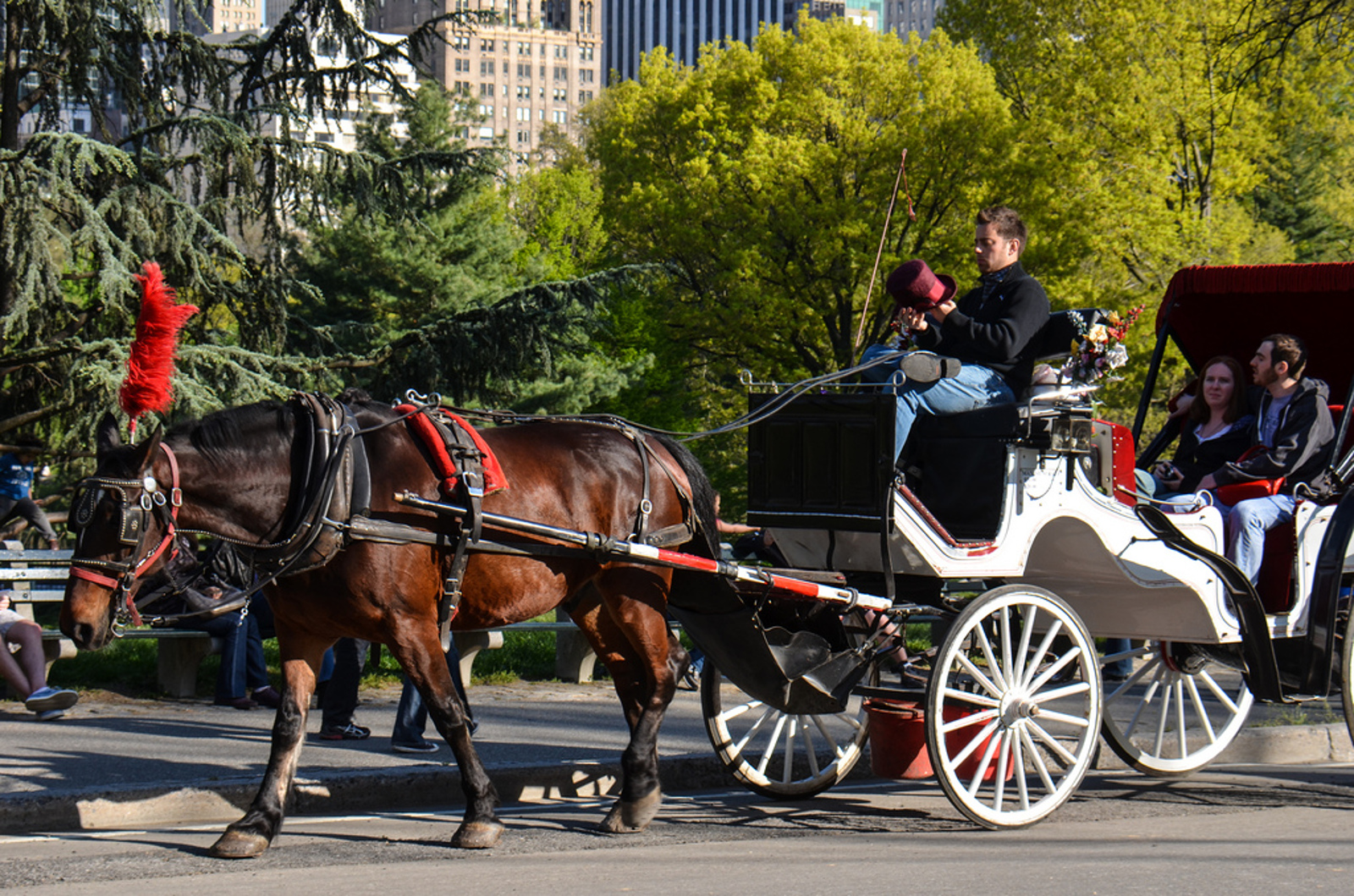 There are many gestures are available to convey romance: a box of chocolates (vegan of course), a bouquet of red roses, or even a simple card. But for some people, the epitome of romance includes going for a ride in a horse-drawn carriage. From the outside, the prospect of riding in a luxurious carriage with a beautifully outfitted, majestic horse seems like a wonderful activity, however, when you take a look behind the glitz and glamour, it appears to be anything but.

Sadly, due to the popularity of romantic horse carriage rides, this activity has transformed into a large-scale industry. With this, the carriage horse industry has become a staple of many city’s tourism economies and their value is completely profit driven. As a result, these horses are no longer considered living breathing beings but commodities who are abused and forced to work, nine hours a day, seven days a week.

Unfortunately, despite this cruel reality, this industry has managed to retain its charm in the eyes of tourists in cities like New York City; Savannah, Georgia; Cleveland, Ohio; and Charleston, South Carolina among others. Tourists, who are the primary customers for this business, are not privy to what lies beneath the surface of this industry nor understand how unnatural it is for a horse to haul heavy carriages around on concrete streets while surrounding by busy street traffic. However, when you take a close look at these factors it is incredibly apparent that a truly “romantic” carriage ride doesn’t exist.

Carriage horses work in dense urban environments most of the time, and this in and of itself is cruel. Horses are not well equipped to deal with things that characterize this environment such as sudden noises and movements, exhaust fumes and hard, hot surfaces. In fact, it has been estimated that once a horse hits the busy streets to work as a carriage horse, their life expectancy is cut in half.

These environmental factors are not only physically uncomfortable for the horses, they lead to serious health problems. These include respiratory issues from exhaust fumes, leg problems from constantly walking on hard surfaces and heatstroke. The asphalt these horses walk on all day can be up to 50 degrees hotter than the outdoor temperatures. New York City summer temperatures can reach up to the 90-100 degree range, where other popular horse carriage cities, like Savannah or Charleston can exceed 100-105 degree temperatures. When you factor in the additional temperature of the asphalt, it is a wonder that these horses can even stand up.

According to horse veterinarian, Holly Cheever, “A horse loses 8 to 10 gallons of fluid with exercise in a hot environment; with high humidity, cooling by evaporation cannot occur and the horse’s core temperature continues to climb. And with the searing heat of New York City’s asphalt surfaces the temperature at street level in New York could be as much as 45 degrees higher than that recorded by the U.S. Weather Bureau.”

To provide these animals with enough water to allow them to regulate their body temperature would require carriage drivers to take frequent breaks, a luxury that most never afford their animals.

According to the Coalition to Ban Horse-Drawn Carriages, “By law [in New York City], horses are allowed to work nine hours a day, seven days a week. Although they are supposed to get a 15-minute break every two hours, there is no way to enforce it.”The average carriage weights between 1,800 and 2,000 pounds. While horses are known for their ability to carry heavy loads, their bodies are not designed to pull this amount of weight for nine hours every single day. It is also important to mind the fact that the horses used in the carriage industry are not bred to be able to lug heavy loads, rather the majority of them are “breakdowns” from the racing industry who were sold by their previous owners after they were no longer profitable. Sadly, this means that many horses come into the carriage industry with prior physical ailments or injuries that are only exasperated by the grueling hours and stress.

No Rest for the Weary

The horses don’t even get to retire in comfort at the end of the day. Many people likely envision the horses in luxurious stalls, romping in green pastures. Unfortunately, both space and pastures are in short supply in cities. In New York, the horses live in cramped stalls half the size they should be. An audit in New York City found they didn’t have enough water, were kept in their own waste in the stables and were often at risk of overheating.They don’t get any pasture time, which horses require for their health. It is truly all work and no play for carriage horses.

The Dangers of Carriages

Besides being downright cruel, horse-drawn carriages are also dangerous for the horses and the public. Horses are prey animals, so they have strong flight drives. This means that if they are frightened, they are likely to run. They are easily spooked by city noises. Placing them on busy roads, which are filled with noises and constant movement, is ridiculous. They can be hit by cars, or become easily overwhelmed and frightened.

A perfect example of this is an accident that occurred in Savannah, in April 2014. The driver of a horse carriage lost control after the horse lost its bit, throwing the driver from the carriage. The passengers were left in the vehicle as the horse, terrified, ran down the street and hit four cars before coming to a stop. Luckily, all involved were safe, but it was still a dangerous situation that could easily happen again.

In 2014, a horse carriage accident in Charleston, South Carolina, made the news when a spooked horse collided with a building injuring one of the riders. Recently, in Cleveland, Ohio, two different horse-drawn carriage/car accidents were responsible for shutting down a major bridge over the span of 24 hours. These are only isolated examples of major accidents that made the news, instances of horses getting spooked and going undocumented are incredibly common. New York City statistics more accurately reflect the frequencies of these sort of accidents: In the past two years alone, there have been over 20 accidents in New York City.

In addition to the physical danger, there are also health and sanitation problems associated with horse carriages. The most obvious is the waste left by the horses on the street. Often no one cleans this up, leading to an even smellier city. Diseases can also be transmitted from the horses to other animals and people. This does not set the mood for romance.

Luckily, many places appear to be seeing the writing on the wall when it comes to the horse carriage industry. San Juan recently banned horse drawn carriages after a horse publicly collapsed. While reactions were mixed, many supported the ban, including tourists.

In July 2014, the director of the St. Louis Health Department, Pam Walker, tried to ban carriages after seeing horse named Moose appear to be suffering from heat stroke. Unfortunately, her efforts were unsuccessful, showing how powerful the carriage industry can be.

The most well known fight to ban horse carriages is probably New York City. In December 2014, the Mayor’s bill to ban them went to City Council, and it includes a provision that the retired horses can’t be slaughtered. The bill would go into effect on June 1, 2016, and would represent a major victory in the fight against horse-drawn carriages. If successful, this bill represents a major success and hope that one day the world will be carriage horse free.

While there is hope that legislation will eventually ban the practice, it is up to us to pick up the slack in the meantime. So, if you are looking for a romantic getaway with your significant other, be sure to cross a horse-drawn carriage right off the list – after all, there’s nothing romantic about animal cruelty!

In the past two years alone, there have been over 20 accidents in New York City.